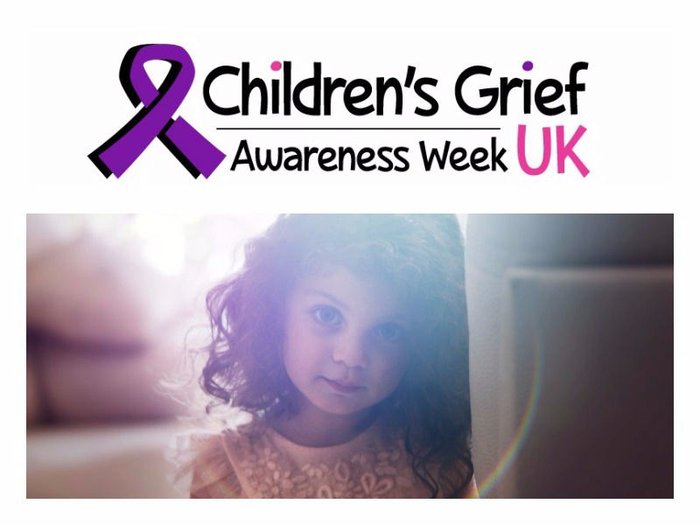 Did you know that one in 29 children have been bereaved by the loss of a parent or sibling? That’s the equivalent of one child in every class at every school in the UK who has experienced the death of a loved one, but may not yet have the support they need.

That's why a coalition of leading bereavement charities and support organisations, the Childhood Bereavement Network, have launched Children’s Grief Awareness Week. Its aim is to highlight the help that’s there for young people – whenever they need it and for however long.

Children’s Grief Awareness Week (16 - 22 November) aims to show how free bereavement support can make a difference to the lives of children who have lost a parent, sibling or other loved one. Through the campaign, they aim to raise awareness of the charitable help and counselling services available to children who are facing bereavement or have lost someone special. The campaign is also calling on MPs to back calls for measures that will ensure children have the support of their family when they need it.

Children’s Grief Awareness Week is also an opportunity for other people to become more aware of the lasting impact that the death of a loved one can have on a child and find out how they can help.

As part of Children’s Grief Awareness Week, supporters are being called on to use the hashtag #yourenotalone on social media platforms to let bereaved children know that bereavement charities are there for them. As well as offer therapy and counselling, many also provide peer-to-peer support from other young people in similarly difficult situations.

Among the celebrity supporters of Children’s Grief Awareness Week is TV personality and bereavement counsellor, Jeff Brazier, who is an ambassador for childhood bereavement charity Grief Encounter. Jeff, who is the author of the bestselling Grief Survival Guide, and his sons Bobby and Freddy have had the support of Grief Encounter since the boys’ mum, Jade Goody died.

As part of Children’s Grief Awareness Week Jeff is fronting a moving video campaign called Dear MP. It’s calling for the support of politicians to ensure that every bereaved child in the UK has access to the ongoing help and care they need, as well as parity for grieving families.

A coalition of bereavement charities, including Grief Encounter, Cruse Bereavement Care, Child Bereavement UK and Winston’s Wish are behind the #SupportLifeMatters campaign, which is calling for a cross-government policy on bereavement, to address issues including time off work for those caring for a bereaved child.

Jeff said: “Now is the time to remove the pain of continued uncertainty.”

This month, the Government and MPs from across all parties voiced their continued support for Kevin Hollinrake’s Parental Bereavement Leave Bill, which will ensure bereaved parents are given two week’s paid bereavement leave, when a child dies.

But it will still be up to the discretion of employers to allow parents or carers time off work to help their children adjust to the death of their mum, dad or carer.

Campaigners point out too, that the state Bereavement Support Payment, introduced in April 2017, cannot be claimed by families if the parents were unmarried and not in a civil partnership. Bereavement payment reforms have also reduced the period of time in which widowed parents bringing children up single-handedly can claim financial support from the state.

The Life Matters taskforce is also calling for bereavement to form a part of the National Curriculum, enabling teachers to foster a greater awareness of how loss can be life-changing.

“Children’s Grief Awareness Week is an opportunity to raise the profile of the difficulties children face, and to put forward some positive recommendations for change, such as those highlighted by the Life Matters Taskforce,” says Dr Ann Rowland, director of bereavement services and education at Child Bereavement UK.

“This additional profile can help to rally support for continued improvement in the care that is given to these children at what will undoubtedly be one of the most difficult times in their life.”

The video is also a poignant reminder that for children who lose a loved one, it’s a loss that they will need continuing support with as they grow up.

One girl said: “The main problem is that children like me officially don’t exist. When my mummy died, no one asked how many children she had, how many people would love, miss and need her everyday. So how do you know who to really help?”

People are being asked to lend their own support to the campaign, by sharing the campaign film with their local MP. If you are unsure what to do or say, the Childhood Bereavement Network has this helpful guide to visiting your MP, which you can download.

Children’s Grief Awareness Week is a chance for young people who’ve been bereaved to discover and make contact with local and national support groups. In many areas of the UK this week, children are joining together through local bereavement organisations to share stories and help each other cope.

Child Bereavement UK, which provides bereavment support with a national helpline, resources and family centres, is urging young people and families to reach out.

Ann Rowland describes the week and its #YoureNotAlone campaign as an important calendar event for bereavement organisations. It gives a voice to the many who are working to improve outcomes for bereaved children and young people.

“We know from our 23 years’ experience of supporting families that a sense of isolation after bereavement is a common thread in the experience of children and young people,” she says.

“Many children who join our support groups express relief at the realisation that they are not the only ones who are facing life without their mum, dad brother or sister.”

In Stratford upon Avon, a group of bereaved teenagers have joined together to create a lottery-funded film, called Our Story, set to be screened as part of an invitation-only event in the town on November 20. In it, they relate their own personal stories of bereavement, as well as the support they have had that’s available to other children that may not know about it.

Ingrid, 15, who became involved in the film after losing her father, said: “It’s opened my eyes to the differences between people and how everyone experiences grief differently, so I know that I am not alone and that my experience is completely normal.”

Young people also share their experiences of bereavement and of how hard it can be to open up about it, in short film that's been released by Child Bereavement UK during Children's Grief Awareness Week. In it, they share how bereavement support has made a big difference to their lives and helped them grow around their loss.

“There is so much more that we can do as a society to ensure that the needs of bereaved children are better understood and met,” says Ann Rowland.

Most children’s bereavement support organisations depend upon charitable funding to provide their vital services. The BBC’s Children in Need appeal has provided financial help to many and as part of its own November fundraising initiative, has made a film, Saying Goodbye which is available to watch on the BBC’s iPlayer.

Viewers who watch can see through the eyes of children the big difference that bereavement support charities make to their lives.