Why should I read Jeff Brazier’s Grief Survival Guide? 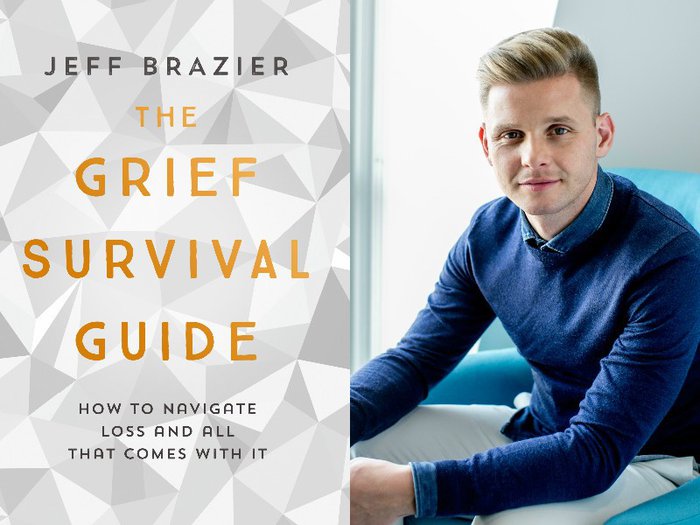 Since his former partner Jade Goody died in 2009, Jeff Brazier has been on an extraordinary journey. The devoted single dad of two young bereaved sons has transitioned from being a reality TV star to become a life coach and counsellor, charity ambassador for bereaved families and now, a best-selling author.

His book, The Grief Survival Guide – How to Navigate Loss and All that Comes With It (Hodder & Stoughton, £16.99) has won enormous praise.

Jeff’s also attracted new fans with the honesty, integrity and warmth with which he’s told his own story and engaged with the dying and the bereaved to share theirs.

The Grief Survival Guide is a compendium which you could easily find yourself reading cover to cover, but also dip into, as you chart your own course through grief.

Where do I start?

Whether you begin at the beginning – where Jeff describes his own life-changing encounters with loss – or head straight for a chapter that reflects the point you’re at right now, The Grief Survival Guide is a guiding companion for that journey.

No loss is the same, but feelings of sadness, denial, anger, guilt and confusion can compound many bereavements. In the book, Jeff looks back on emotions and frustrations that he and his boys, Bobby, 14, and Freddy, 12, have been through in the eight years since Jade’s death.

He has also drawn on the stories of people who have lost loved ones in many different ways – from baby loss in the early stages of pregnancy, through to the sudden emptiness of ‘adult orphanhood’.

Each story opens up talking points about our conceptions, misconceptions and behaviours when we are bereaved or struggling to come to terms with loss. Forget the ‘rules’, he says, and don’t be hard on yourself.

What will I learn?

It’s a book with a lot of questions. Grief can be a conundrum to which there are no ready answers, but may be catalyst for the kind of conversations that can in time, help us heal.

Jeff is a practitioner of neuro-linguistic programming, a psychotherapy-based alternative therapy that can help us accept, manage and heal from loss, through ways of exploring and communicating our feelings.

“Language and how we use it is incredibly influential on how we see ourselves and interpret our lives,” he explains.

“Some people are typically kinder to themselves with the words they choose, for example, ‘I will be as honest as I can about how I feel’, whereas some are incredibly harsh with their instructions and opt for more limiting versions such as ‘I can’t see myself ever being happy again.’”

He also explores why many men bottle up emotions they feel will be a weakness or a burden. Voicing admiration for how footballer Rio Ferdinand has documented his struggle with bereavement and widowhood, he says: “Change doesn’t always come very easily to men and Rio represented perfectly the fact that grief doesn’t care who you are and what you’ve achieved; it is ruthless in its continuity and makes no exceptions. We have to adapt to it and not the other way around.”

Opening up to grief

Jeff addresses fears people have that grief will somehow taint the social environments they depend upon in daily life. “Here’s the thing,” he says frankly. “Grief is negative. It’s boring and unattractive, but it’s real and that’s what friends are for.”

In the publicity surrounding the book launch, there has been plenty of media interest in Jeff’s long-term relationship with girlfriend Kate Dwyer, which is not yet a live-in partnership. Jeff talks about widowhood, children and nurturing new relationships in The Grief Survival Guide and the complex, but ultimately rewarding, possibilities of building new and loving family relationships after loss.

The Grief Survival Guide is a reassuring and practical navigational tool to have to hand, wherever you are in your journey through bereavement.

Healing from grief isn’t about ‘getting over’ someone we miss, but adjusting to live the life they would wish for us, with them still in our hearts.

“To learn to move forwards, with your loss over your shoulder, on your back, or in your pocket, is to start to ‘manage’ your grief,” he says.

“So often people are told to be strong,” adds Jeff, who reinterprets the meaning of fortitude in the wake of a bereavement.

Simply keeping calm and carrying on, he warns, can keep painful emotions locked in. There is, he says, a greater strength in being vulnerable to grief, expressing pain and, above all, being kind to yourself.