What to wear to your own funeral 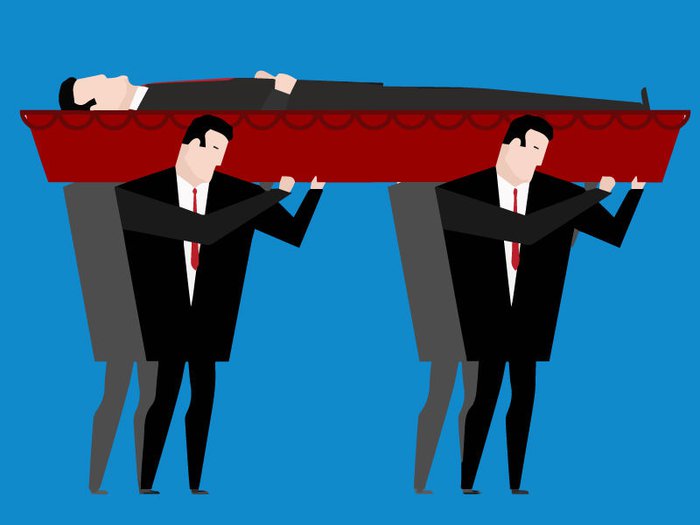 Many people wonder what’s appropriate to wear to a funeral, but have you ever thought about how you’d want to be dressed for your own?

For some people it’s important that they – or their loved one – are bid farewell by mourners at their funeral in colour, or even fancy-dress costume. And that also seems to be the case when it comes to the clothes we’re buried in. Fashions change, even when it comes to dressing the deceased.

“Until about 10 years ago, most people would choose a burial gown supplied by the funeral director,” says Martin Stibbards, an Essex funeral director who has been in the profession for 30 years.

“These days, many people tend to supply their loved one’s own clothes for the funeral and the way people are dressed often reflects the theme of the service.

“From formal suit and dicky bows to football shirts – people like their loved one to be dressed for the event.” 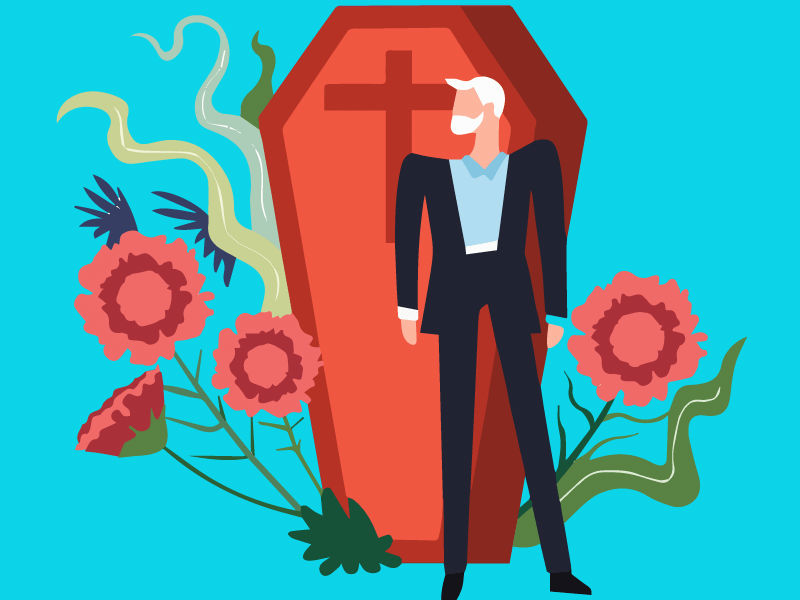 Martin is among funeral directors that still also provide the more traditional burial gown that many people were buried in during the 20th century. Made from cottons, taffeta and satin-type fabrics in pastels shades, they resemble rather rakish smoking jackets, gowns and nightdresses with a touch of the golden age of Hollywood.

“We’ve always had the funeral dress available ever since I was in service,” he says.

“Nowadays people tend to go for them more if someone lost or gained a lot of weight before they died, or if there is no visitation.”

Usually held in a chapel of rest, a visitation is an opportunity for people to pay their respects and take a last look at their loved one, before the funeral. The person’s body is usually embalmed and they will be dressed and groomed, before being laid out in their coffin.

Does it matter how we're dressed when we die?

“A person wearing their own clothes is a familiar thing for families,” says Martin.

“Seeing someone they love lying in a coffin, in a chapel of rest is a very unfamiliar experience. Seeing them in their own clothes can help the mind blur out some of the less easy details.”

If the person often wore a certain perfume or an aftershave, families can also supply this, so a little can be spritzed on the person’s clothes and in the chapel of rest. A familiar fragrance can be comforting, says Martin, when things are so very different. 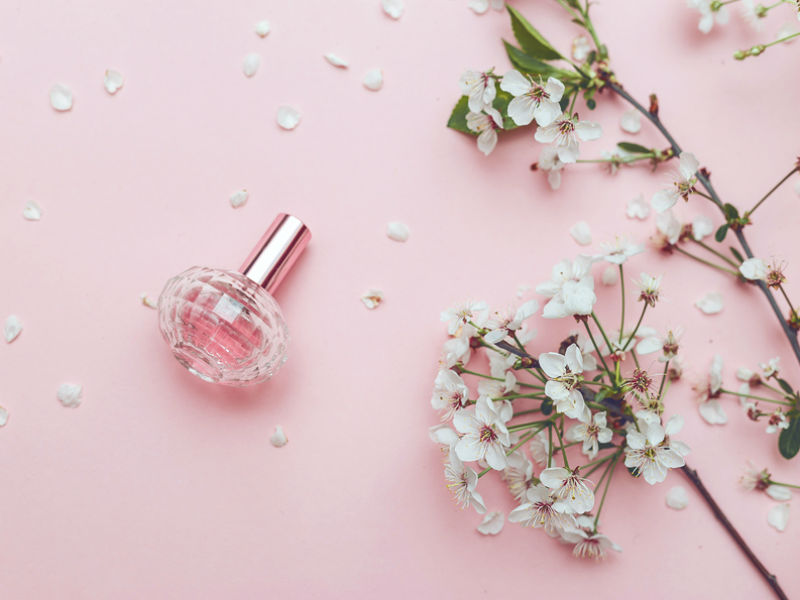 When there’s no viewing and someone’s coffin is closed during visitation, families can still bring favourite things for their loved one to wear.

“They often want their loved one to be comfortable, so it might be a favourite pair of pyjamas, dressing gown and slippers,” says Martin, who has also dressed people for their funeral in superhero costume, bikers leathers and even wedding dresses.

“If someone is being given a traditional burial, then virtually anything goes.”

What can't you wear for green burial or cremation?

While it’s possible to attend your own funeral wearing anything you like, environmental regulations prohibit certain materials from being cremated. This includes treated leather – including biker’s regalia – and footwear with leather or rubber soles.

Glasses and accessories, too, cannot be cremated. Before a cremation, these items will be removed by the funeral director, with valuables returned to families. Often – with the family’s permission – glasses and shoes are donated to charities, while cremation metal recycling schemes allow metal implants, such as replacement joints, to be re-used by other people.

Green and woodland burial grounds have even stricter rules than crematoriums, as the clothes and coffins that people are buried in must be biodegradable. For this type of green funeral, funeral directors can usually supply a simple gown made of calico.

I'm a naturist: Can I be buried in the nude?

If you fancy the idea of a naturist funeral, it's possible to go naked to your own funeral, although a body must shrouded from public view with a covering, such as a shroud, coffin or casket.

Natural burial is becoming an increasingly popular funeral choice and some people choose a shroud instead of a coffin for their loved one; which wraps their entire body and doubles as a burial gown. As well as cotton, hemp and bamboo fibre shrouds, it’s also possible to find woollen burial wraps.

Artisan-maker Yuli Somme, pictured below, for instance, creates what could be described as couture shrouds – from beautiful felted wool, at her Bellacouche studio in rural Devon. 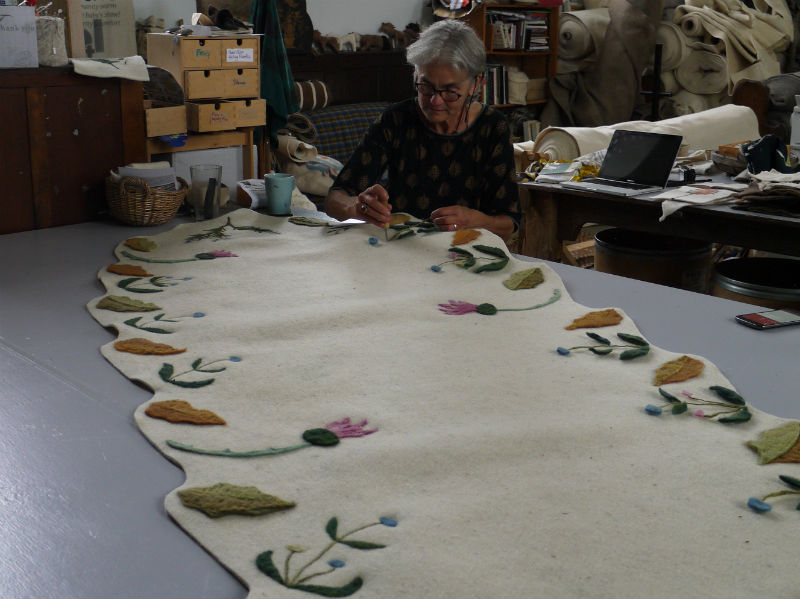 Burial clothes and the law

For around 150 years in England, it was illegal for people not to wear wool shrouds at their funeral after the passing of the Burial in Woollen acts in the late 1600s.

Enacted to protect the national economy; people faced a hefty fine for flouting the law. Long before the act was repealed in 1863, people had long been ignoring the rules without consequence.

“When you look back to Victorian times, most people wore their own clothes to their funeral and in some cases, were even posed in family groups for photos after they died,” says Martin.

Queen Victoria’s bereavement in 1861 brought high mourning into vogue. This time, social etiquette, rather than law, inspired a formal dress-code for the bereaved – observed, in the case of widows, for two years. In big cities stores sprung up that specialised in fashionable widows’ weeds and accessories for all occasions.

The most famous, Jay’s Mourning Warehouse, in London’s Regent Street announced new collections every season; including daywear and evening gowns, fabulous hats, fans and jewellery. All available in every colour – so long as it was black.

In the latter part of the 19th century, attention also turned to what the fashionable dead wore. Manufacturers began making burial gowns in satins and crepe, with details including ruches, false shirt-fronts, ribbons and bows. Even the coffin interiors were finely dressed. 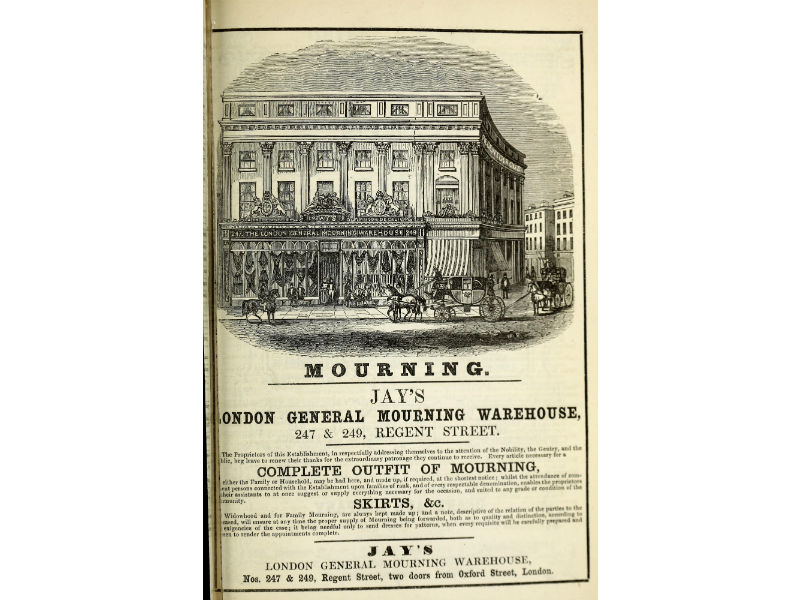 A number of specialist companies in the UK still make and supply traditional funeral gowns and coffin linings to funeral directors. These include men’s, women’s and unisex burial gowns and robes in pretty satins and taffetas, while most have also diversified to offer other essentials of the funeral profession.

The Yorkshire Rose, Milady, Elegance, Esquire and Regal are among the reassuring-sounding choices among burial gowns in pinks, oyster, greens and lavenders showcased online.

For Catholic funerals, images of the Virgin Mary and Sacred Heart of Jesus are offered as options to be inserted into the gowns and worn over the breast.

In some faiths and cultures, washing and dressing someone who has died, is a very important part of religious funerals and the respects paid by their families.

Before Muslim funerals, loved ones help attend the person who has died and shroud them in layers of simple white cloth. In the Jewish tradition, too, people go to their grave in simple linen or muslin shrouds, with men also wearing their prayer shawl. In both faiths, the washing and dressing of the dead is a prayerful and deeply spiritual ritual.

In secular Britain, attending someone who has died is something that most people are unaccustomed to, but is a practice that some people are beginning to carry out, as a loving gesture to their loved ones. Funeral directors can help people tend to their loved one, whether the washing and dressing is a faith ritual, or something families simply wish to do.

Dressing their child can be deeply meaningful for parents grieving a stillborn baby or neonatal death. A number of charities, supported by an army of volunteers sew and knit tiny burial gowns for babies who are too tiny for shop-bought clothes.

“This is the only time these parents will dress their baby,” says Shellie Blow, a trustee who sews for Cherished Gowns, which makes garments from wedding dresses donated to the charity.

“Having a gown which fits, and has so much love and sentiment attached to it, means so much to them,” she says.

Ultimately, what someone wears for their funeral today is a matter of love, personal choice or beliefs, when the very difficult time comes to say goodbye.