A guide to the embalming process 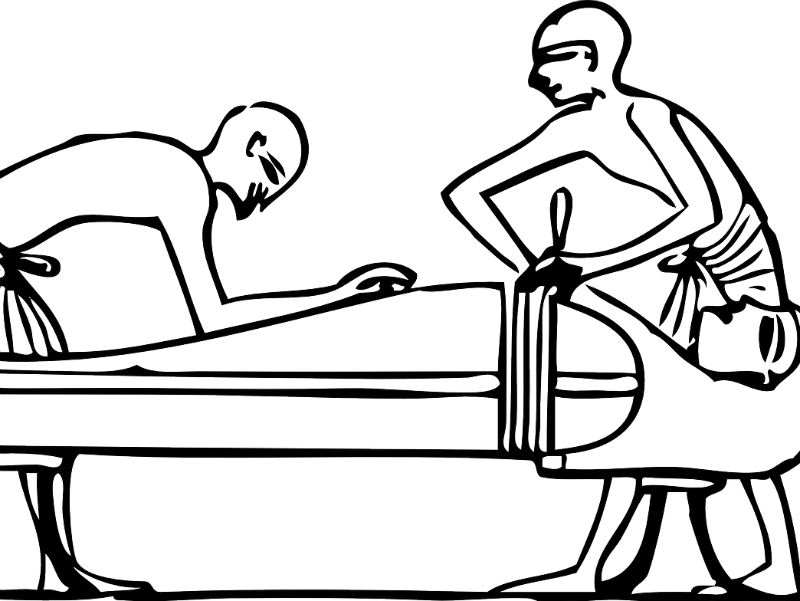 Embalming is the process of preserving a body to delay the natural break down of cells, which begins when die. It temporarily helps prevent the processes that cause our bodies to decay.

It’s a funeral practice that’s been carried out for thousands of years in one form or another. In its modern form it’s been widely practiced since the early 20th century in the UK, when it was sometimes also called ‘hygienic treatment’.

In some parts of the world, extreme embalming has seen people temporarily preserved and posed and photographed with family members. However some religious funerals, including Jewish funerals and Muslim funerals, prohibit embalming.

Why are bodies embalmed?

Many people who choose to have a loved one embalmed, do so in order to spend a little more time with them. The person may be laid out in an open coffin at home, in a church or a funeral home’s chapel of rest.

People can look very different after death. The embalming process can help restore the person’s appearance, giving an impression of peaceful sleep and wellness. This can be a great comfort for grieving families, especially if they lost a loved one to an illness.

Embalming can also bring closure for families who lost a loved one in traumatic circumstances and did not get the chance to say goodbye before they died. There are specialist embalmers that perform post-mortem surgery upon people who suffered devastating injuries in fatal accidents.

Many funeral directors have the skills to carry out embalming, or can arrange for an embalmer to do so at your chosen funeral home.

What does embalming do to a body?

Embalming temporarily delays the first stages of decomposition, which begin to break down our body tissues from the moment that we die. It can also seem to restore our physical appearance.

The embalming process involves draining and replacing body fluids which are no longer circulating around the body, with a mixture of preserving chemicals.

Embalming solutions are commonly a mixture of chemicals including formaldehyde, glutaraldehyde, methanol, ethanol and phenol, as well as water and colourants that reduce pallor and restore the appearance of the skin.

Are your organs removed when you are embalmed?

Although the Ancient Egyptians removed and preserved the vital organs during embalming, this is not the case today.

Unless the person who died was an organ donor, they will be embalmed with their organs inside their body.

When someone has a post-mortem to identify their cause of death, the organs are removed and weighed. They are replaced inside the body cavity, before it leaves the mortuary.

What is the process of embalming a body?

There are two main types of embalming: arterial embalming and cavity embalming. The process usually takes between two and four hours.

– What is arterial embalming? Arterial embalming sees the blood removed via the veins and replaced with embalming fluids via the arteries. Tubes are inserted into the body and attached to a machine, which pumps the embalming fluid in through the jugular vein in the neck or femoral vein in the leg, causing the natural body fluids to be circulated around the body. These are drained via a tube that’s inserted in the femoral artery, or the carotid artery in the neck.

More about the embalming process

Before a body is embalmed, it is carefully washed and then washed again after the procedure. During embalming it is massaged, to help work the preserving fluids through the body.

When a person's body is prepared, their genitals are kept covered, to protect their dignity.

The person’s facial features are set by the embalmer into a natural expression. The jaw is sutured with invisible stitches to keep it in place, while caps placed under the eyelids help keep them closed.

Then the person who has died will be carefully groomed and dressed.

Cosmetics are used to enhance a natural appearance and are formulated to be used by funeral directors in their care of the deceased.

Photos are often used as a guide to ensure the person’s hair and makeup are just right.

Embalming can’t always guarantee that the person will look exactly as they were when they were alive, but people are often taken aback at how ‘well’ their loved one looks.

Although death can make someone seem changed no matter how expert the embalming skills, for many people, it’s a comfort that brings them closure.

Post-mortem surgery, for instance, is a highly expert reconstructive embalming skill, carried out following traumatic deaths such as road accidents.

In cases when it would otherwise be too distressing to view – or perhaps even recognise – a loved one due to their injuries, top embalmers work to reconstruct the features of the person who has died. Although it’s not always possible to completely disguise a disfigurement, it provides families with the comfort of being able to say goodbye.

Embalming also gives people an opportunity to allow for more time with their loved one before the funeral. They might want to bring them to lie at home, or visit them in a chapel of rest. It can afford family members from further away time to get to where they need to be, to pay their respects.

Can a body be viewed without being embalmed?

Yes, a body can be viewed without embalming. Embalming is simply one of many funeral options to choose when someone dies.

If you do not opt for embalming, the funeral director can prepare your loved one’s body for a viewing before their funeral following many of the same steps – washing the person’s body, setting their features, brushing their hair and dressing them. The person’s body will be kept refrigerated in between viewings.

How long can you keep a body at home?

A body that has not been embalmed will begin to undergo the natural processes that happen after death, sooner.

It is usual for someone to be embalmed before they are brought home for an open coffin viewing or a wake, although this is not always the case.

In circumstances where a person has not been embalmed and is brought home for an open or closed coffin wake, the funeral is generally held within a few days of the death and the room is kept very cool.

Bringing a baby who has died home

The Cuddlecot is an insulated crib which allows bereaved parents to bring babies who are stillborn, or died in infancy, home for a few hours, or even days.

Many hospitals are beginning to provide these, to enable families to spend precious time with their baby, without the need for embalming.

How long does it take an embalmed body to decompose?

While they are not on view in an open coffin, embalmed bodies are usually kept in a refrigerated space, or a very cool room. In theory, the time it takes for an embalmed body to fully decompose can be many years, depending on the environment.

Bodies that are donated for medical research are embalmed and are generally kept for at least a couple of years, before the donor’s body is cremated.

In the right conditions embalming fluids can preserve a body indefinitely, but burial, moisture or humid conditions attract bacteria to form and begin the process of decay. If you're considering choosing one, our extensive guide to burials will be a very useful resource.

Whether a body is embalmed, extreme-embalmed or not embalmed, it needs to be kept cool in between viewings and until the burial or cremation takes place.

The Ancient Egyptian embalming method differed from today’s methods. It primarily involved the use of natron salts to totally dehydrate the body. This was then was wrapped in resin-coated linen strips, to prevent any moisture in the air from causing decomposition. Mummies in museums today are displayed in cases with the humidity strictly controlled.

It can take between eight and twelve years for an unembalmed body buried six feet down, to decompose to a skeleton. This can vary – or take longer– depending on the climate, moisture in the soil and the kind of coffin they were buried in.

An embalmed body may take a little longer to decompose when it is buried, but embalming cannot prevent the process from happening indefinitely. Concrete-lined graves or burial vaults may also slow the process, but nature will take its course.

Can an embalmed body be cremated?

Yes, an embalmed body can be cremated. The embalming process is carried out to bring comfort to families who wish to spend time with their loved one before a funeral, regardless of the type of committal they choose. For more information on this choice as a whole, our extensive guide to cremations is an excellent place to start.

Is it a law that you have to be embalmed? In most cases, no. In fact, embalming is forbidden in law, if the person died from a notifiable infectious disease.

One exception is if the person was overseas when they died and their body is being repatriated back to the UK – or their home country – for their funeral. It’s necessary for a body to be embalmed before it is sent overseas. Some people choose instead for their loved one to be cremated in the country where they died and bring their ashes home for the funeral.

The British Institute of Embalmers’ code of conduct states that bereaved families should be fully informed and give consent (ideally in writing) before embalming goes ahead. You should never feel pressured to choose embalming.

Embalming is prohibited for green funerals at natural burial grounds, to prevent embalming fluid leaching into the soil.

Embalming is also prohibited by some religious faiths, including Judaism and Islam, unless required by law.

– Begin your search for a local funeral director who can help you decide whether or not to include embalming among the funeral choices for your loved one.