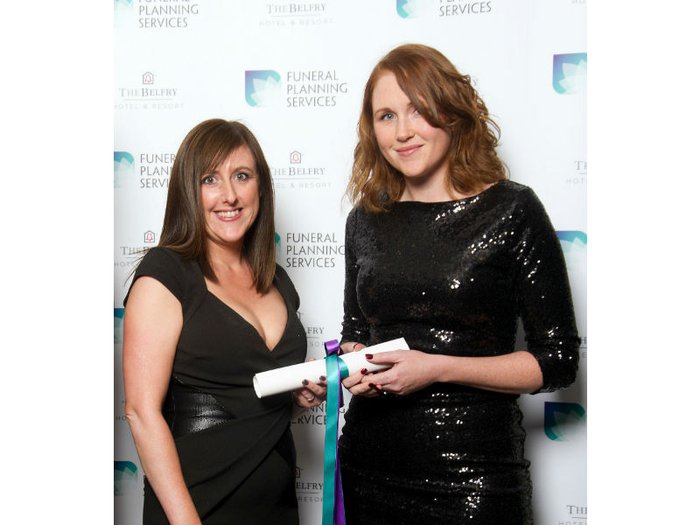 Michelle Peskett and Katy Ware are behind Ruby Funerals in Hampshire. Both are former school careers advisers, who were inspired to follow a new path after losing special loved ones. Here, Michelle shares some of the life lessons she’s learned since becoming a funeral director with Katy in 2008.

A shared experience: Katy and I both lost our nans at around the same time. My nan’s funeral director’s office was like something from the 1870s, a ticking grandfather clock, dusty and fusty. At Katy’s nan’s funeral, they had made lots of mistakes. We wondered, was that everyone’s experience?

Discussing their funerals in the staffroom, we went from there. We did some industry training and work experience placements with funeral directors around the country. We found a lot of people in the profession who were happy and willing to help us.

Where the heart is: When we first opened, the idea was to look like someone’s home. We very much steered away from looking like a typical funeral director’s office – there’s a cosy fireplace and pictures on the wall. We’ll sit down and chat to people with fresh sheets of papers and ask, how can we help you? There’s no set plan, or boxes to tick.

A meaningful goodbye: Some families want traditional funerals, while other people we look after ask us to arrange something less formal. One funeral we did was for a little girl, who had a younger sister. So as not to upset her, her mother asked if we could not talk about coffins while we were arranging the funeral, but the ‘toybox’ – and for us not to wear uniforms.

We were happy to do this and wore jeans for the funeral, which was more like a school assembly. The headteacher held the service and there were even nursery rhymes. Some people were amazed that you could celebrate someone’s life in this way.

When people are grieving, they’ve hit the wall and slid down it: We’re there to pick them up. The funeral profession’s undergoing a mini-revolution and many funerals are now celebrations of life. There are people from different career backgrounds coming in. We’ve met other funeral directors who were formerly headteachers and social workers. Funeral directors are real people. Most people are in this profession because they love people, love their job and are caring, happy people.

In the past, it was traditional for women to lay out the dead: I’ve never felt uneasy or uncomfortable with a dead person. As my nan always used to say, it’s the living, not the dead, you have to worry about.

We’re entirely female run and Katy and I are both mums. Sometimes, people organising a woman’s funeral like to deal with other women, especially if their loved one preferred to see a female doctor or nurse in her lifetime.

Our practice has evolved as we’ve gained a reputation for the service we provide. As Marilyn Monroe famously said, I don’t mind living in a man’s world, so long as I can be a woman in it.

We treat people as though they were members of our own family: Some people like to be involved in preparing their loved one for their funeral. They can be as involved as they want to be. Some people will ask, can I do the hair, or the nails? We’ll put some music on, have a drink, whatever they need.

For most people, it’s the opportunity to get involved, helping to do something for their loved one because they feel as though they should. It can be a lovely experience and an opportunity for us to get to know the families more. It gives you hope; especially when you talk about someone, about who they were. There can be tears and, often, laughter.

We first met our funeral arranger, Marilyn, when we did her mum’s funeral. Marilyn had never worked in the industry before she became part of our family. It can be so hard for people to walk through the door of a funeral directors, but Marilyn can really say she’s been there – and that gives people peace of mind.

It can be hard to say goodbye: If the person has died at home, the removal can be quite an intense situation. Sometimes, the person who has done the removal will be asked by the family to lead the funeral. Then on the day of the funeral, you’re not a stranger arriving. You hold their hand at the chapel and I’ve had a lot of people say, “Thank goodness you’re here.”

You’d have to have a heart of stone to stand there and not feel tears pricking the backs of your eyes. The day I stop caring is the day I stop my job. That’s when it becomes a transaction and that’s not what it is all about. I love helping people and the biggest satisfaction is when the day goes without a hitch.

You have to earn a living, but it’s not about the money: TV shows can put funeral directors in a bad light, but most people in the profession are doing it because they care. We work hard to gain people’s trust and we always thank families for asking us to look after their loved one.

We often talk people out of spending money on things, especially older people who sometimes feel that the more expensive things are a way to show someone that you loved them.

We’ll also encourage families to shop around to be sure they are choosing the funeral director who is right for them and their loved one. Like any service provider, funeral homes can appeal to people in different ways and bereaved people shouldn’t feel rushed or pressured into making a decision.

A part of the community: Many people will pop in and see us after a funeral. A funeral director can be a pillar of the community. And, a bit like in our old jobs, there’s a lot of signposting by us to other services and support.

Dealing with feelings: I feel sad lots of times. It could be due to the circumstances of the death, or because of the families. Children’s funerals are tough. After a child’s funeral, we always lock the shop up and go home and spend time with the kids. It’s a reminder of how short life is and how cruel it can be.

As a team, we support each other. At our weekly meetings, we go through the diary and if anyone on the team is having a tough time, we share it.

Katy and I were colleagues, but not really friends before we started the business. Working together over a period of time we’ve become best friends – people even think we’re sisters, we have that close a relationship now.

I used to be such a worrier: Now, doing this job, I realise life is too short to worry and I’m much happier. I enjoy my family. It’s about the people in your life.

I’m a real advocate though, for people thinking about what they want for their funeral and talking about death. It’s not just about financial elements, but about really knowing what that person would have wanted. It gets to the point that families don’t even know whether a loved one would have wanted to be buried or cremated and there can be a lot of worry about whether they are doing the right thing.

Our kids are very proud of what we do – mostly: A mum at school came up to me and said: “I need to come to your shop… We’ve got a kitten?”

Puzzled, I told her I was a funeral director. I later found out my eight-year-old daughter had been telling her friends that I ran a shop selling clothes for cats. But our children are mostly very proud of what we do and are very matter of fact about it. They know and understand that death is a part of life.

In fact, I think my daughter would quite like to do this job, although it may be because of the biscuits. We’re bought a lot of biscuits by clients – and she loves eating them.

When my time comes: I’ve already told my husband I don’t want a ‘funeral’ although I know he wants something a bit more formal and a few words said about him. I’d like to be cremated and for my ashes to be taken to somewhere I loved, while the people I loved listen to my favourite music and scatter me. My tastes are really eclectic and my favourites change every week. It’s been Ed Sheeran’s Shape of You, now it’s Ariana Grande’s Side to Side. If it’s on my playlist, I liked it.

Of course, I hope they’ll all be crying their eyes out.