Our Missing Peace: breaking the silence when a child dies 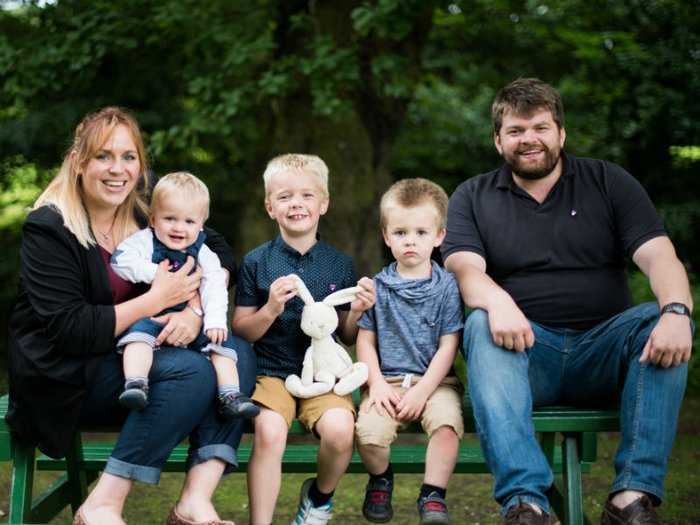 Nicole and Dan Bowles with, from left, Edward, Alistair and Toby

“Breaking the silence has to come from the parents and I’ve been very vocal about Ben. The idea is that if someone’s wearing the badge, then they are okay to talk about child bereavement.”

Mum-of-four Nicole Bowles is behind a ground-breaking campaign, Our Missing Peace. Its aim is to signal to other people that it’s more than okay to talk about a child who has died and to be more open about bereaved parents’ loss.

She and husband Dan’s beautiful second son died when he was four months old, in 2012.

A badge of honour

She hopes that a simple heart-shaped pin badge with a missing jigsaw piece motif, could help break the silence that follows baby loss and child loss. An emblem of the death of a child for parents, family and friends to wear, that says: Yes! Please do ask and talk about them.

“Friends and family can wear one too and talk about their losses. And if you are a bereaved parent and see the badge, you know you’re not alone,” she says. 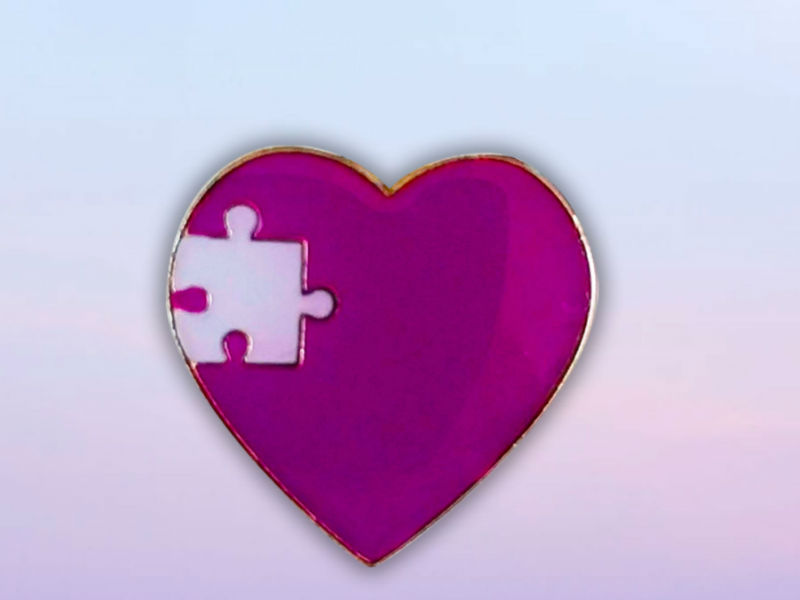 Our Missing Peace began as a simple determination on Nicole and Dan’s part that Ben would always be a part of their family; someone they could talk about as openly as their other sons, Alistair, eight, Toby, four, and Edward, one.

Ben would be six this July.

“Ben brought us so much joy, he was a really cheeky chappie with so much incredible spirit,” smiles Nicole, a full-time mum who lives in Chester.

In the years since Ben died, she says she has become used to uncomfortable silences. Of people turning away, unsure what to say and friends drifting out of her life. As if, in some way, child loss may be contagious.

“When people ask me, ‘how many children have you got?’ I pause.

“I’ve been ready for a conversation. People don’t know what to do, or they say sorry. But actually, you were okay with it. I don’t want to deny Ben’s existence anymore” 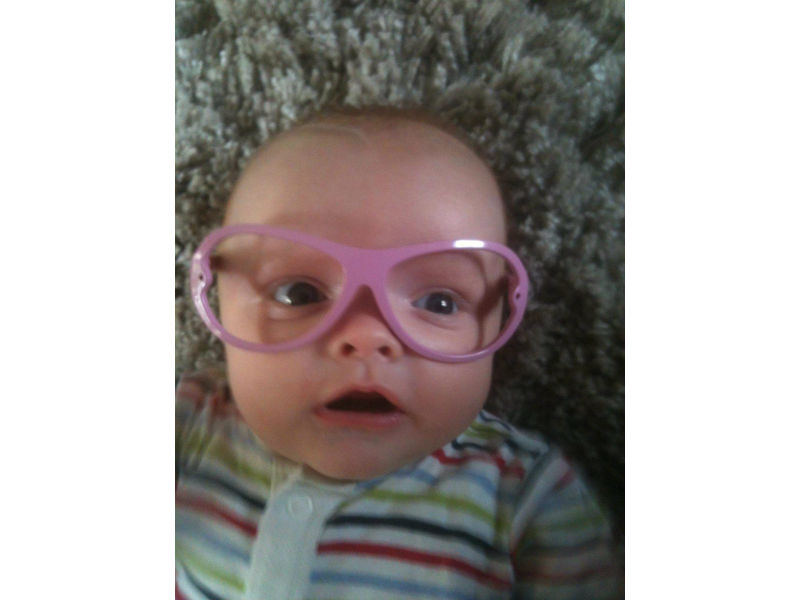 Nicole found herself dodging questions, walking on eggshells to avoid saying ‘my son died,’ so as not to make other people feel uncomfortable. She decided that enough was enough.

“It’s up to us to be vocal, but by wearing the pin, the onus is not entirely on the bereaved person,” she says.

“I said to Dan, it needs to be simple.

“My aim is that the Our Missing Peace badge will be a thing that people recognise and ask, ‘who’s your missing piece?’

“At the moment, people don’t know how to deal with grief. It’s a lost art in our society, where fewer people die young. The daughter of a friend of mine died in a car accident aged 21. She was a real person, with friends, a life and suddenly she was taken away and you ‘can’t talk about her anymore’.”

Our Missing Peace launched at the Scottish Parliament in July 2017 with First Minister Nicola Sturgeon and members of the House wearing the heart-shaped pins in support of the child bereavement awareness campaign. 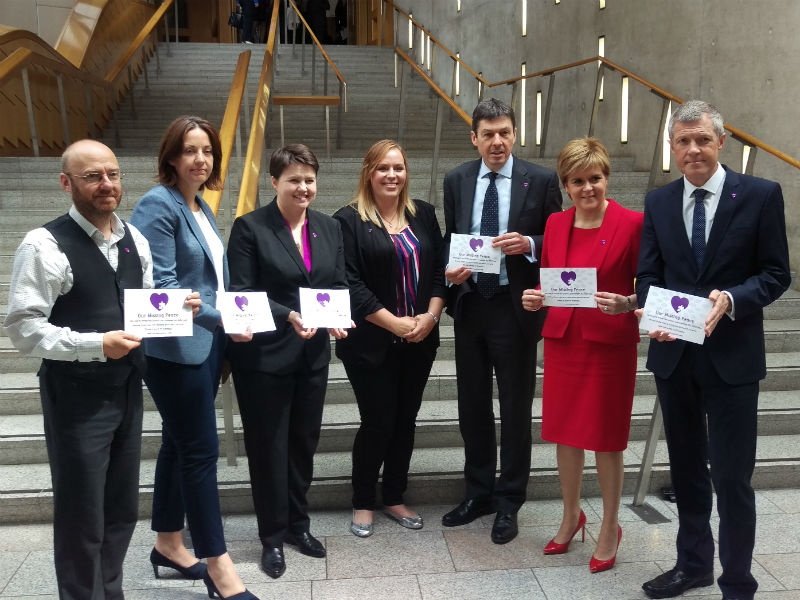 The campaign has been gaining traction via social media ever since, and Nicole’s next aim is for the pins to be available in memory boxes gifted to parents of stillborn babies and through funeral directors all over the UK.

Ben died as the result of a freak accident when he was in his pram. Nicole found accessing charitable bereavement support difficult, as Ben’s cause of death did not fall within the qualifying remit of some organisations.

“Some families don’t get that support because they don’t fit in a certain box,” explains Nicole. She also experienced a lack of continuity in support, due to the peripatetic nature of family life with Dan working in the military.

Thankfully, with the family living in Scotland when Ben died, she and Dan were referred to baby loss charity the Scottish Cot Death Trust, which supported them despite the fact Ben wasn’t lost to cot death.

It wasn’t until a few year after the family moved south, that Nicole stumbled across the Compassionate Friends, a peer-to-peer support charity that provides a listening ear to parents, no matter how old their child was, or how long ago the death of a child. 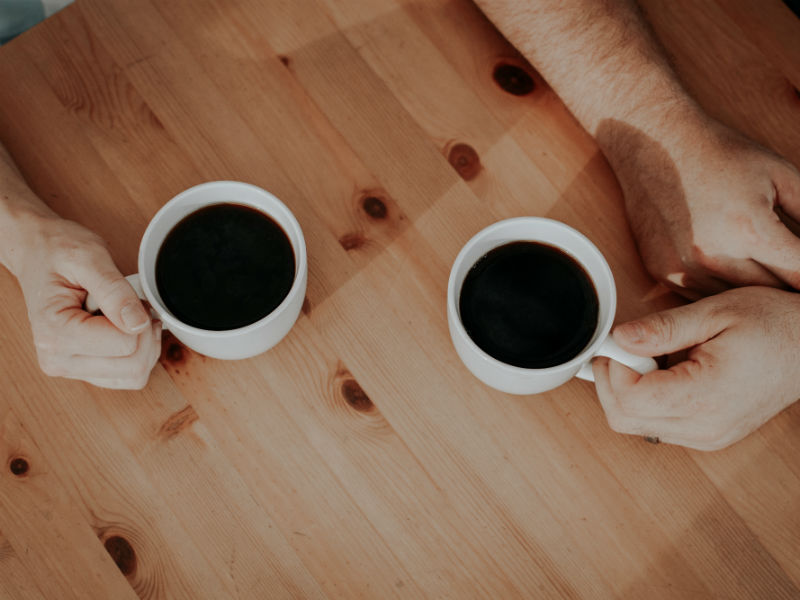 “Not everyone who has lost a child finds or gets that support, and whether you lose a baby, a six year-old or a 30 year-old, all parents need it,” she says.

“I went to the funeral of a friend who died in a motorcycle accident aged 30. I wondered about his mum and thought, who is there for you?”

With so many bereavement charities already offering support, Nicole says the focus of her own charitable endeavour is on signposting parents and families to the help available.

A gala fundraising ball at the Chester Grosvenor hotel marks Ben’s birthday, July 14. By fundraising, Nicole hopes to support the cost of making and distributing Our Missing Peace Badges for free, which she currently sells for £2 each to cover their manufacture.

Nicole is also hoping to raise the profile of an ancient word, Vilomah, that she has adopted to describe the mum or dad of a child who has died.

As she explains, a bereaved husband or wife is widowed, while a child who loses a parent is an orphan. But there’s no word to simply express that you have lost a child. She hopes people will come to recognise that Vilomah means ‘a bereaved parent;’ from the Sanskrit way of saying ‘against the natural order of things.’ 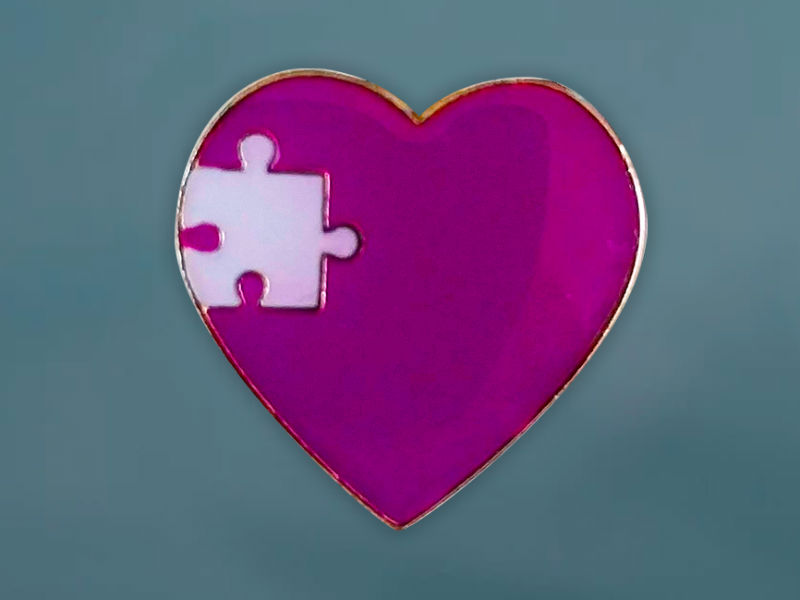 Juggling her campaign with bringing up a young family, Nicole is also building up a network to help increase the reach Our Missing Peace. She is working with The Baby Loss Awareness Week Stakeholders Group, to raise the profile of the Missing Peace among bereaved parents during the national campaign week held in October every year.

Funeral directors, she hopes, will also embrace the important part they potentially have to play in making the Missing Peace pins available, ensuring that people never forget the loss of a someone’s child.

“Funeral directors do an amazing job, dealing with people at their lowest, on the crappiest day of your life,” she says frankly.

“It must be a tough job; funeral directors must feel helpless when someone’s child dies, but this way, they can help, too. 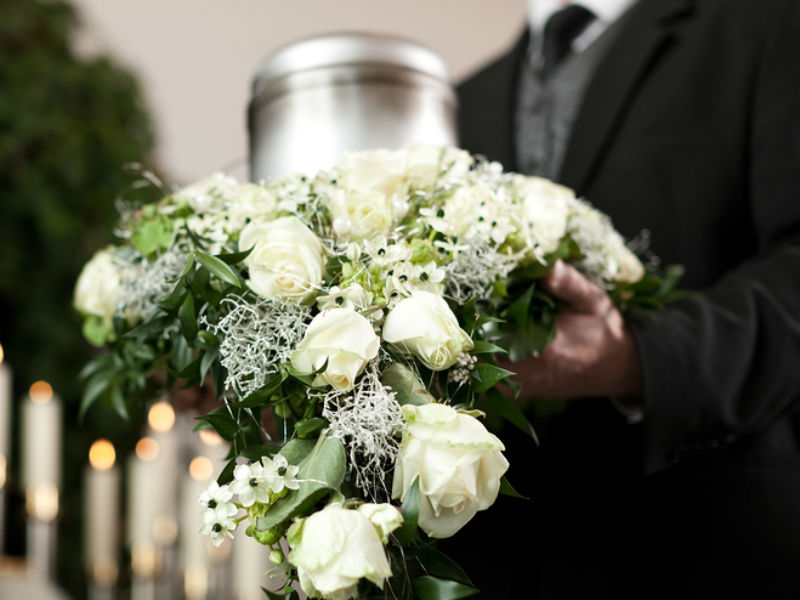 “Ben’s funeral was beautiful and positive and if the funeral director gets it right they can do so much to make the process easier.

“When we got to the funeral I could tell Frazer, who drove the hearse, had blatantly been crying. The funeral directors invested every bit of warmth they had and couldn’t have done more to help.”

In hospital after the accident, Nicole and Dan had had to make the unbelievably heartbreaking decision to switch Ben’s life support machine off.

“You have to put your child’s needs first, whether it’s going to break your heart or not,” she says.

“He was in my arms when he took his last breath. It’s the funeral we remember as they day we had to say goodbye.” 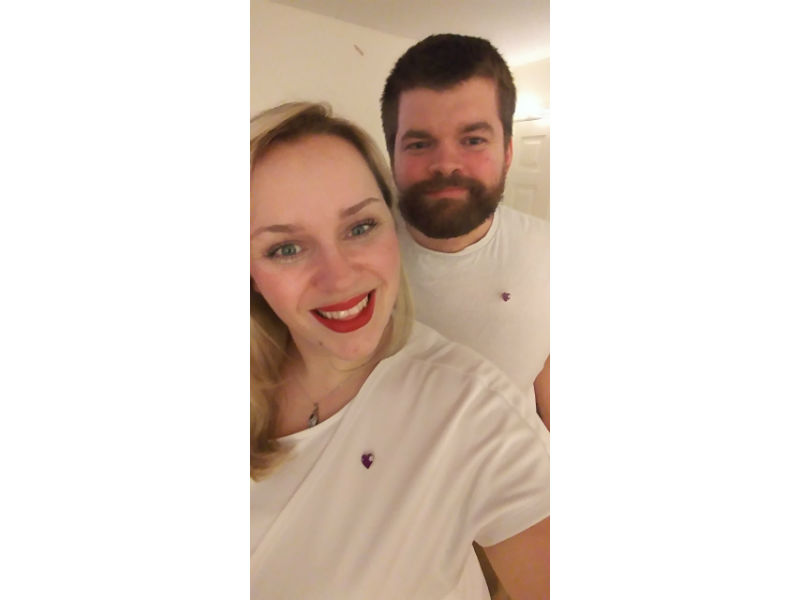 Time, she and Dan agree, isn’t a healer, but makes the burden of grief easier to carry.

“The first year is the hardest, then the second is the first without support and you’re dealing with the grief on your own.

“The third year you think you’ve got it,” she says.

“The fourth year, you realise, no, I haven’t got it, but I’m getting used to it. Five years? That’s the trigger point. You get blinded-sided. There are still days when the loss is brutal.”

Around 1,300 people are now wearing Our Missing Peace badges and Nicole has found they are breaking down a wall of silence that many bereaved parents have endured for decades.

“I’ve had women open up and say, I had a stillbirth or spoken about a child who died more than 30 years ago,” she says. 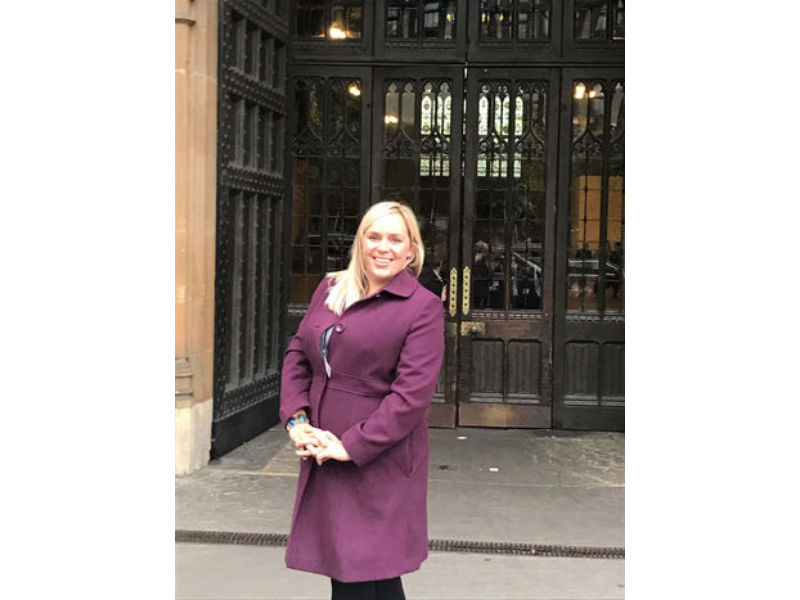 “My mum’s very traditional and maintains stiff upper lip and used to struggle, when people asked her how many grandchildren she has.

“Now, she will talk about Ben, and that he died, to her friends. This is what comes out of Our Missing Peace and it’s amazing the conversations the badges are opening up.

“It started as something for bereaved parents. Now it’s got wings.”