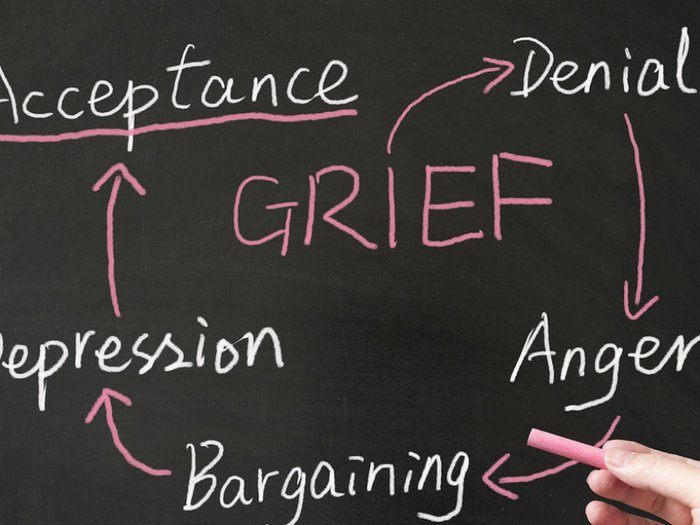 The five stages of grief are a framework that outlines the typical emotions felt by those who are experiencing grief. These are:

Bear in mind that the five stages are just a guideline designed to provide a framework for talking about grief. Everyone experiences bereavement differently and there is no ‘right’ way to cope with grief.

Having already discussed the causes and effects of denial, we now continue our in-depth look at these stages with the second stage: anger.

Anger is an emotion that most of us are familiar with. People express it in many different ways, whether it is shouting, crying, refusing to speak, or in extreme cases, wanting to hurt themselves or others. Many people experience anger every day, to varying degrees, but it may not be the first emotion you think of when you think about grief.

Anger can occur at any time after the initial loss of your loved one, and you may still experience moments of anger years afterwards. Some scientific studies, such as the Yale Bereavement Study, 2007, showed that anger tends to peak within the first year of losing a loved one, though this varies based on the circumstances.

Why does it happen?

If you have lost a loved one, you may feel angry at a number of things:

Even if you think this anger is ‘irrational’ or ‘illogical’, that does not mean that these feelings are stupid or that they can reasoned away. They are a very common feature of grief.

Psychologists often regard anger as a defence mechanism, part of our ‘fight-or-flight’ instinct that would protect us in the wild. For example, if someone attacks you, you sense danger, and you become angry – this anger gives you the aggression and strength to fight them and protect yourself.

British psychiatrist Colin Murray Parkes suggested that people feel anger during grief because they still think there is a threat. Because you have not fully accepted the passing your loved one, you are reacting as if they might still be saved or recovered.

Although to someone else your anger might appear illogical – there’s nothing you can do now about your loved one’s passing – it is actually a deeply ingrained reaction to what your mind perceives as a threat.

When is it a problem?

The way in which your anger shows itself may be unexpected. In his book ‘Bereavement: Studies of Grief in Adult Life’, Parkes and his associate Prigerson describe anger as “an emotion that is not always directed towards the object that gives rise to it.”

In other words, when we are angry, we may shout at people or become frustrated by things that are not actually what we are angry about.

For example, you might become irritated or angered by small things that friends or family members do. You may find yourself taking it out on them, whether that is being irritable, blaming them for things that are not their fault, or shouting at them.

Although to a certain extent this is understandable because you are grieving, being aggressive, especially being physically aggressive, is a serious problem. It can damage your closest relationships when you need them most. Later on, when you have calmed down, you may regret your actions.

You are not a bad person for having these feelings – but they need to be expressed in a healthy way that does not cause harm to anyone.

Another way in which anger can become a problem is if you bottle it up for too long. Whereas some people may shout and scream, you may have difficulty expressing your feelings. You may instead refuse to speak to someone who has angered you, or avoid talking to anyone. Your feelings will not disappear if you ignore them, and you may end up never properly working through your bereavement.

Opening up to a counsellor or bereavement support specialist can be a constructive way of voicing how you feel.

How do you move past it?

Often one of the most important parts of dealing with anger is to admit what you are actually angry about. This can, however, be difficult.

For example, if you are angry at yourself for not doing more to help, a part of you may not want to admit that this is what you are feeling. Subconsciously, you are directing the anger elsewhere – towards friends or family members perhaps – in order to avoid guilt and shame.

Or maybe you are angry at the person who has passed away. You might find yourself thinking “Why couldn’t they have fought harder?” or “Why did they leave me?” It can be painful to acknowledge that this is what you are feeling, as you might feel guilty for thinking badly of them, or feel stupid for being angry about something that clearly could not have been changed.

However, once you understand where the anger is really coming from, you will be able to express the anger in a healthier way.

If you are struggling to understand your anger, our advice on coping with bereavement might be helpful for you.

Meanwhile, dealing with anger as it occurs is important. There are various exercises to help control an outburst or express your emotions in a positive way: