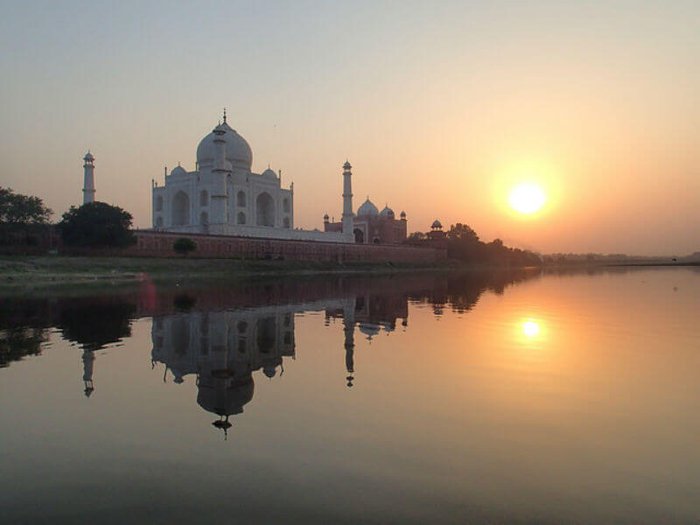 View of the Taj Mahal from other side of the river at sunset.

Mausoleums have been designed in all shapes and sizes, and include some of the most iconic buildings in the world.

This list is a global guide to some of these famous mausoleums and the people commemorated by them. 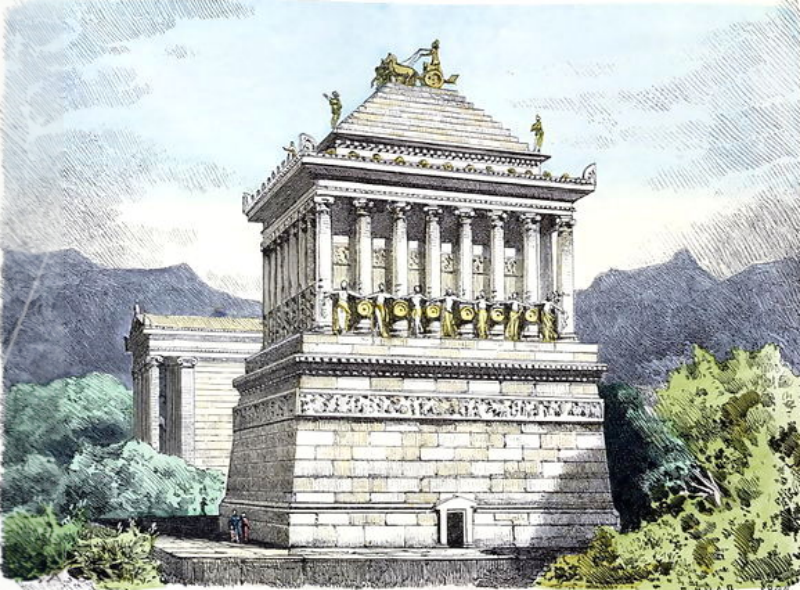 Image by Ferdinand Knab on WikimediaCommons

The lost Mausoleum at Halicarnassus commemorates Mausolus, a 4th-century governor of the ancient Persian territory of Caria.

After his death, Mausolus’ widow, who was also his sister, had her husband’s body entombed in a specially constructed tomb that she called a ‘mausole-um.’

Descriptions of the Mausoleum at Halicarnassus illustrate a 411 square-feet complex of tiered blocks; the final tier was a pyramid topped by a marble statue of a 4-horse chariot. The mausoleum was probably destroyed by an earthquake in the late Middle Ages, but the ruins of its foundations still survive in modern-day Turkey. 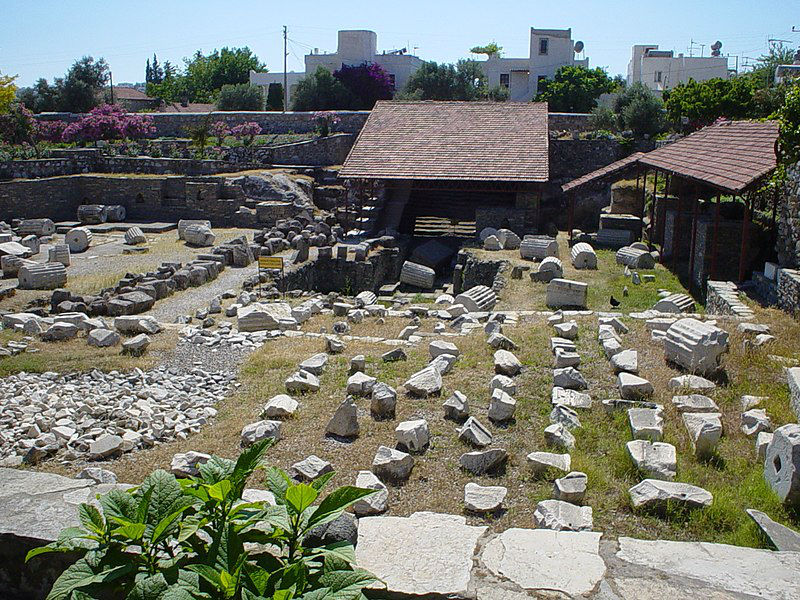 Photo by Monsieurdl on WikimediaCommons

In the 19th century Julius Beer commissioned a mausoleum for his daughter in the Lebanon Circle of Highgate Cemetery, London, based on the Mausoleum at Halicarnassus. Unlike its ancient inspiration, the Beer mausoleum can still be visited today. 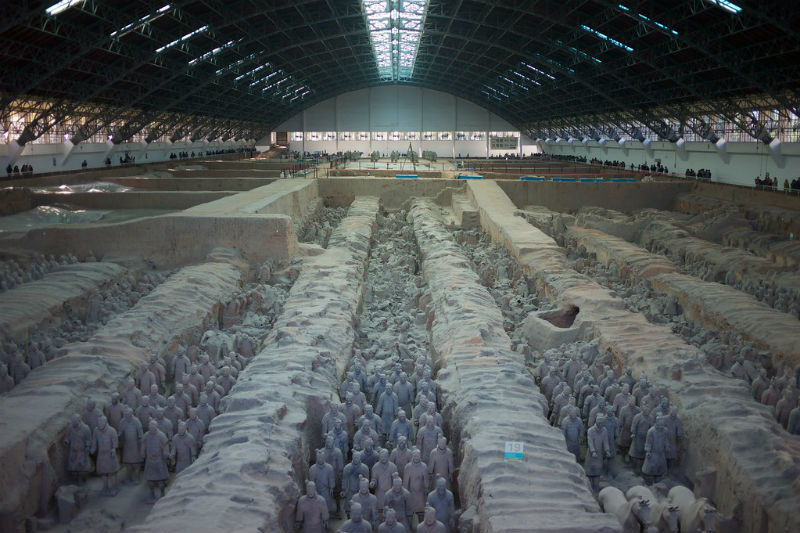 The Qin Empire, which was the first to rule all of China, was formally established in 246 BC by Shihuangdi; the ‘first sovereign Emperor’. Ying was a forceful and uncompromising ruler, but became increasingly distrustful and superstitious. Before his death, at the age of 49, he conscripted 700,000 labourers to build an elaborate mausoleum to protect him in the afterlife.

The Qin mausoleum is a 76m high mound that consists of an inner tomb and an exterior ‘city’ covering 22-square miles. It is guarded by 8000 terracotta warriors, with horses, chariots and weapons. The face of every single warrior is unique, and they were originally painted in bright colours, which faded rapidly after the mausoleum was discovered and exposed to the air in 1974.

The inner tomb is an underground palace, with 18 houses in its courtyards, and evidence of roads and bridges.

The Qin empire collapsed after Shihuangdi’s death and the mausoleum is now the only evidence of his life, but not his only legacy; a derivative of the word Qin is China. 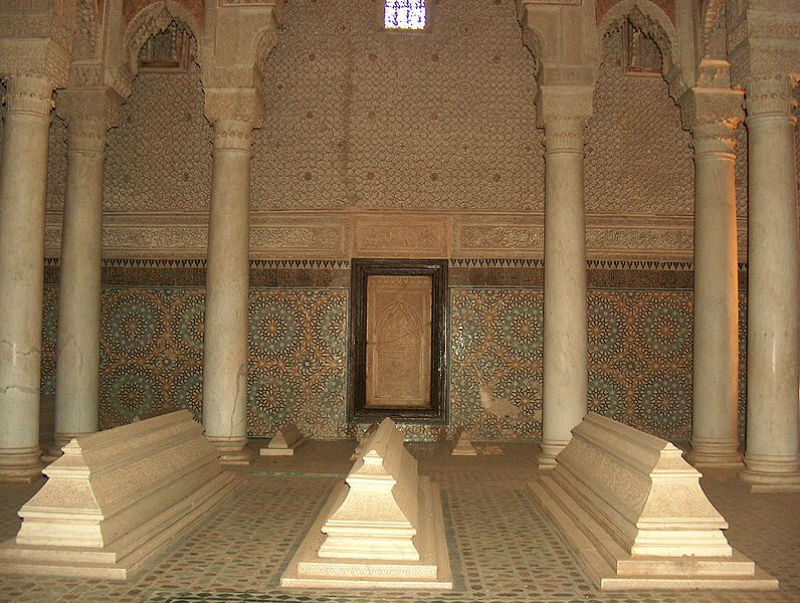 Photo by Alexandr Dmitri on WikimediaCommons

The Saadian tombs in Marrakech date from the 14th century, but were substantially enlarged on the deaths of Sultan Mohamed Sheikh and his son and successor Aḥmad al-Manṣūr to commemorate their dynasty.

The mausoleum is surrounded by a garden that contains more than 100 mosaic-covered tombs. Aḥmad al-Manṣūr was himself buried in the central Hall of Twelve Chambers, in 1603.

The Saadian tombs were almost lost in the 18th century by Sultan Moulay Ismail’s attempts to destroy remnants of the previous dynasty. Fortunately, the new sultan decided to preserve the actual tombs.

The destruction, however, did hide the mausoleum from the world until they were revealed by a French aerial survey in 1917. 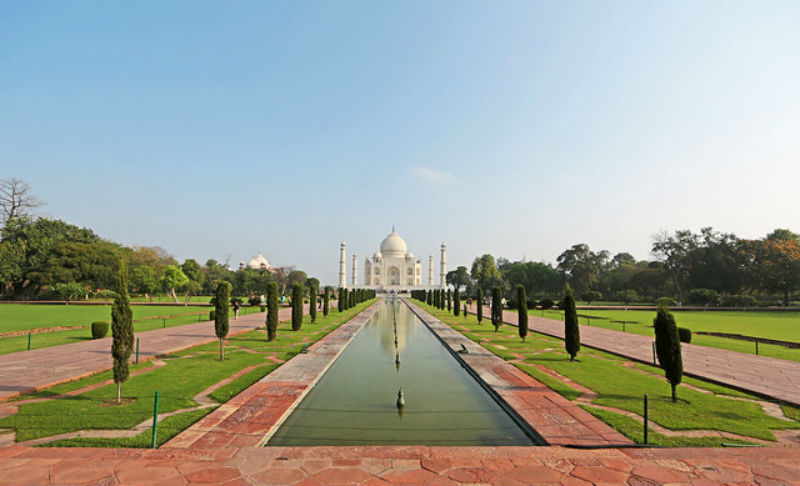 The Taj Mahal was inscribed as a UNESCO World Heritage site in 1983, and the mausoleum is also an unparalleled monument to love.

The Taj Mahal was constructed in the 17th century by the Mughal emperor, Shah Jahan, to entomb his beloved third wife Mumtaz Mahal, after she died giving birth to their 14th child. The tombs of both Mumtaz and her husband, which are encircled by a latticed marble screen, are situated in an octagonal chamber with a domed roof on the upper floor of the mausoleum. The design of the ground floor is a symmetrical complex of smaller rooms that link to minarets on the corners of the building.

The Taj Mahal is set in stunning gardens on the banks of the river Yamuna. Positioning the mausoleum at one end of the garden, rather than the centre, enhances the beauty of the Taj Mahal by creating a reflection in the pool in front of it.

National Geographic notes that this pool is the only structure that has ever duplicated the beauty of the Taj Mahal. 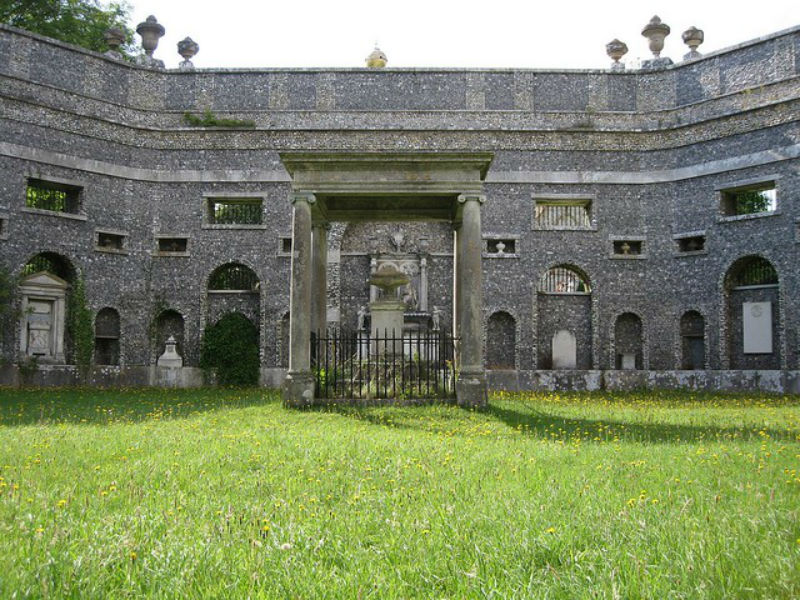 After receiving a bequest of £500 from his friend, George Budd Doddington, to build ‘an arch or temple’ in his honour, Sir Francis Dashwood, Lord le Despenser, 2nd Baronet, decided to build a mausoleum.

The design, a large open-air hexagonal without a roof that is linked by triumphal arches, was inspired by the 4th century Arch of Constantine in Rome.

The centrepiece of the Dashwood Mausoleum is a pedestal dedicated to Sir Francis’s wife, Lady le Despenser. Dashwood's mother, stepmother, himself and Doddington are commemorated by plaques.

In 1774 the heart of Paul Whitehead, a local poet, was placed in an urn, in accordance with his will, but it was stolen in 1829. 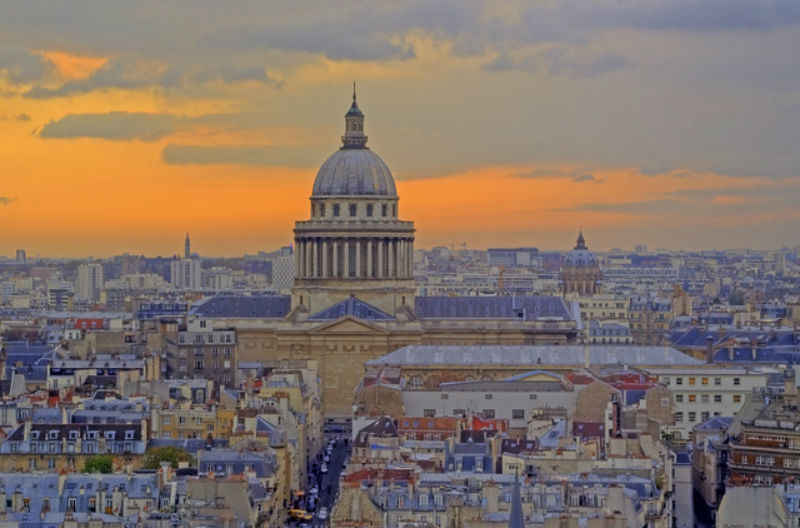 Interment in the national mausoleum of France is a rare honour, decided by act of parliament.

The building also includes a plaque dedicated to the French people recognised by Yad Vashem as the “Righteous Among Nations” for risking their lives to protect Jews from the Nazis.

The facade of the French Panthéon is modelled on the Roman Pantheon, but the neoclassical design, by Jacques-Germain Soufflot, includes other distinctions, such as a large dome in the roof and paintings depicting the Christian story, the life of St. Genevieve, patron saint of Paris, and the history of the French monarchy. 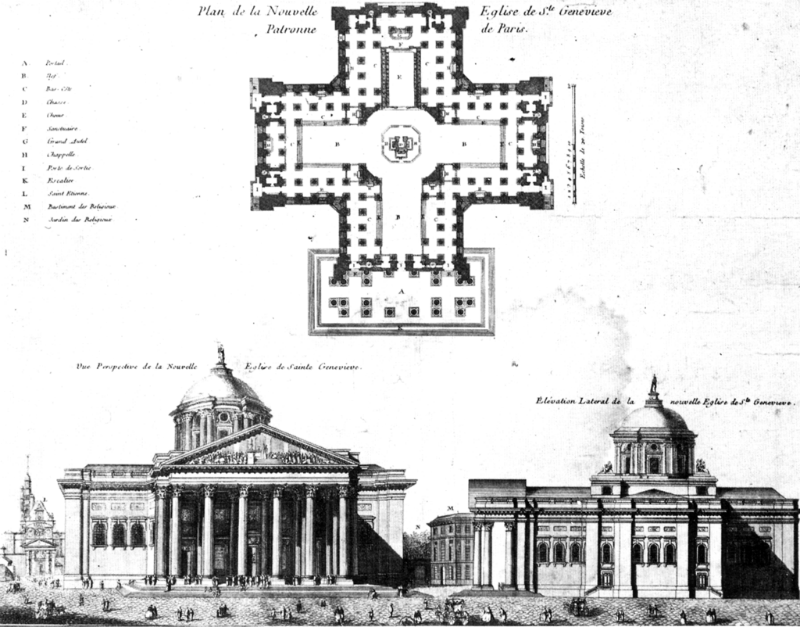 Image by Jacques-Germain Soufflot on WikimediaCommons 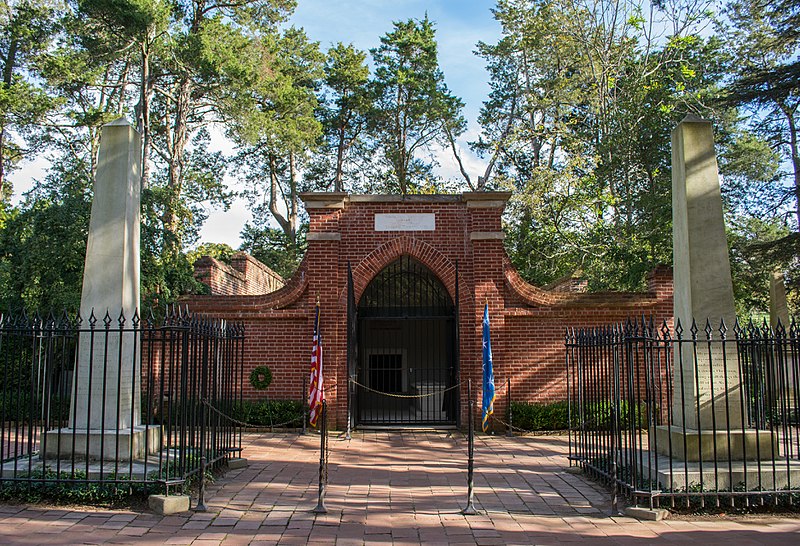 Photo by Tim Evanson on WikimediaCommons

Before he died in 1799, George Washington, first president of the United States, requested burial in his original family mausoleum at his Mount Vernon estate in Virginia.

He also made plans for the construction of a new mausoleum to replace it. Congress had hoped to bury him beneath the Washington Monument in the capital, but agreed with his heirs that the famously modest president's wishes should be respected. In 1837 the couple’s remains were eventually transferred from the ‘Old Tomb’ to marble sarcophagi in the ‘New Tomb.’

There is a daily wreath-laying cemetery at Mount Vernon in honour of the ‘Father of the Nation.’ 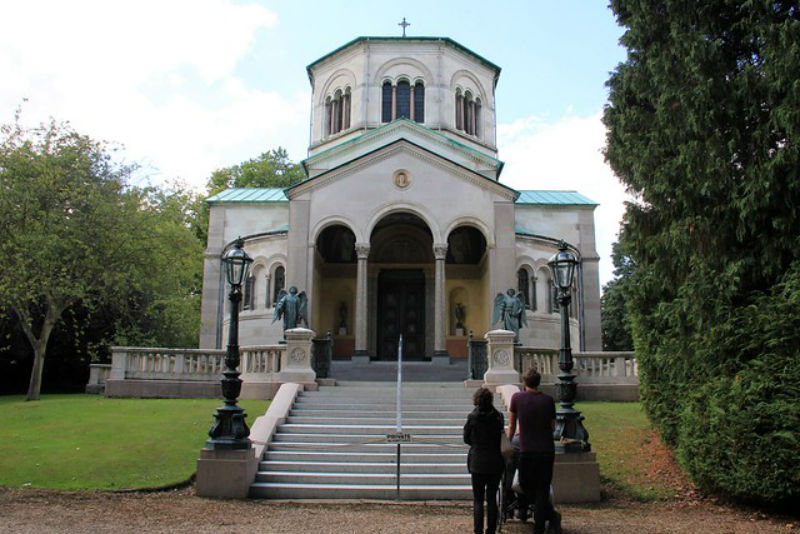 Queen Victoria’s enduring grief for the death of Prince Albert is legendary and she ordered construction of a mausoleum for him only 4 months after he died.

The Royal Mausoleum is situated on the estate of Frogmore House in Windsor, near the royal burial ground.

The mausoleum is designed in the 13th century Italian style and the interior decoration is inspired by the art of Raphael. The tomb is carved from a single block of Aberdeen granite.

Victoria held an annual remembrance service in the Royal Mausoleum on 14 December, the anniversary of the Prince Consort’s death.

When the queen herself died in 1901 she was interred with her husband and the tomb was topped by marble effigies of the couple lying side by side.

The Royal Mausoleum was closed to the public in 2007 because of damp and structural unsoundness, but an extensive restoration project to repair it started in 2018. 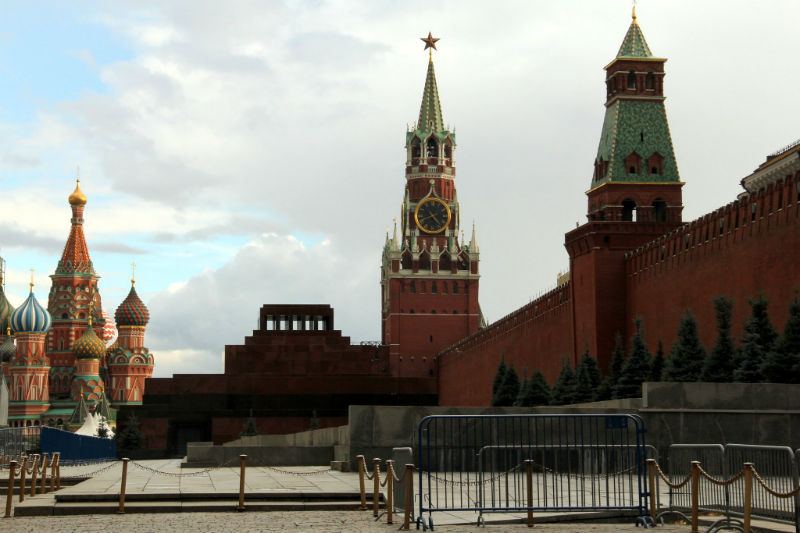 Vladimir Lenin would have preferred a traditional burial, beside his mother, in St. Petersburg, but on his death in 1924 Stalin himself decided to have his body mummified and displayed in Moscow.

The Lenin mausoleum is a glass sarcophagus in a small pyramid-shaped building on Red Square, next to the Kremlin and St. Basil’s Cathedral.

In 1930 Lenin’s body, and a team of embalmers, were temporarily relocated to Siberia, to evade the prospect of Nazi invasion, and only returned in 1945.

A team of scientists oversees the preservation of it. The body receives a chemical bath every 18 months, and Lenin’s suit is changed every three years.

Lenin’s mausoleum attracts millions of visitors every year, but many Russians now believe that, in accordance with his wishes, his body should be moved and buried in St. Petersburg. 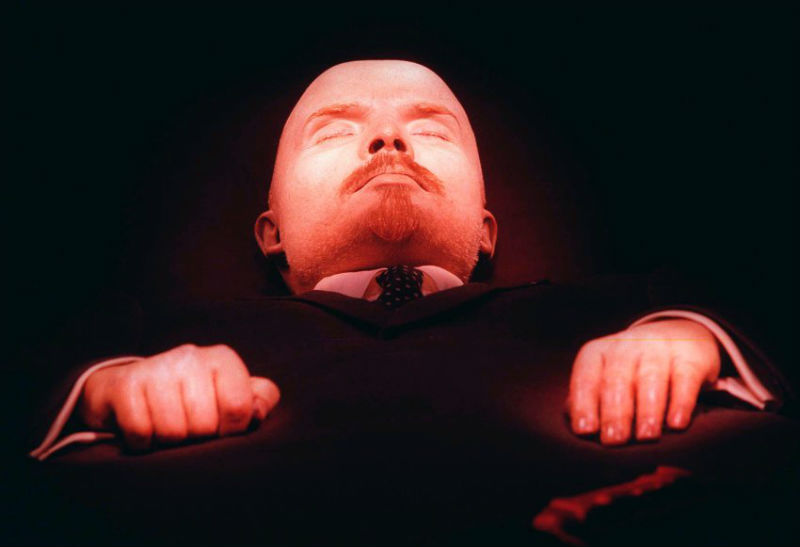 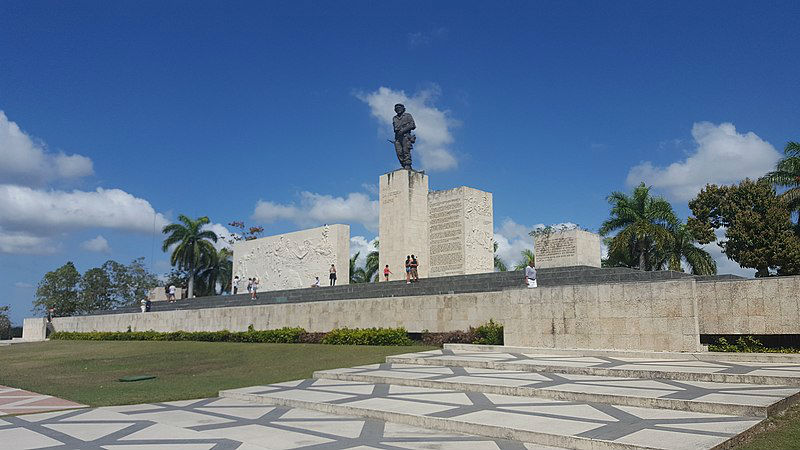 Image by Jan Pešula on WikimediaCommons

Ernesto “Che” Guevara de la Serna’s leadership at the Battle of Santa Clara in 1956 was a turning point in the deposition of Fulgencio Batista from power in Cuba. However, after becoming involved in a failed revolution in Bolivia, Guevara was captured and executed by its army in 1967. His body was not found until 1997.

The Cuban Government commemorated the twentieth anniversary of Guevera’s death in 1987 with a bronze statue in Santa Clara. On its rediscovery a decade later Guevera’s body was interred in a mausoleum beneath the statue with the remains of 6 other men who were killed with him.