Finding a WAY, when you’re Widowed and Young 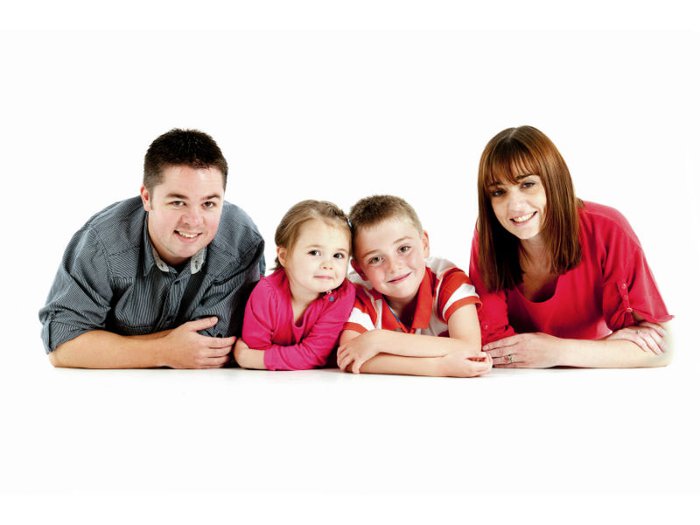 It’s been described as the club that nobody wants to join, but is a welcome support when people need it. Volunteer-run charity WAY – Widowed and Young – has around 2,400 members who have become part of its UK-wide community in the saddest of circumstances.

Footballer Rio Ferdinand explored the peer-to-peer support that fellow widowers and organisations like WAY provide, as part of his documentary for the BBC based on his own journey through widowhood with children, Being Mum and Dad.

Now in its 20th anniversary year, WAY offers bereavement support, socials and weekends away in the company of other people who’ve endured the death of a spouse or the loss of a partner before the age of 51.

Like dad-of-three Rio, who was 37 when his wife Rebecca Ellison died in 2015, around 83,000 younger people in the UK are widowed and coping with the death of a spouse or long term partner.

“I think people are scared to say the wrong thing, but other widows are more likely to be upfront,” says WAY member Stuart Scarbrough, a dad of two from Lichfield. His wife Katie, a former champion ice skater, died of bowel cancer, aged just 32, in 2013.

“It's great Rio is raising awareness”

“People can tread on eggshells around you, or keep asking if you’re okay at the beginning, when of course you’re not,” says Stuart.

“It’s great Rio is raising awareness of how hard it is to cope as a young widowed parent, and particularly acknowledging that it’s difficult for men to know where to turn to and how to deal with their grief.

“Just starting a conversation about these things and breaking some of the taboos around death and bereavement is really important. Hopefully WAY can help more dads out there in the same boat.”

After Katie died of the cancer she fought so hard until the end (her blog is honest, moving and effervesces with her life), Stuart was told about WAY by an older widowed friend.

“My friend was in her 60s when her husband died, so was too old to join, but I hadn’t heard of it,” says Stuart who was keeping life together, commuting to his job at Birmingham Airport and bringing up children Sam and Sophie, who were then aged eight and four.

“It took a few months, but then I joined the Derbyshire group, more for the children than anything.”

It costs £25 a year to join WAY, although charity fundraisers help families in financial hardship to cover their membership costs. Once you are signed up via the website, you can make connections with members in your local area, for coffee, picnics and activities with the kids.

“Speaking to people who had been through the same thing, that’s the connection,” says Stuart. “Everybody gets it. They may be bereaved for all sorts of reasons, cancer, suicide, or accidents. Kids are a lot of the focus, but as you get to know people, we do adults nights, get a babysitter and have fun.” 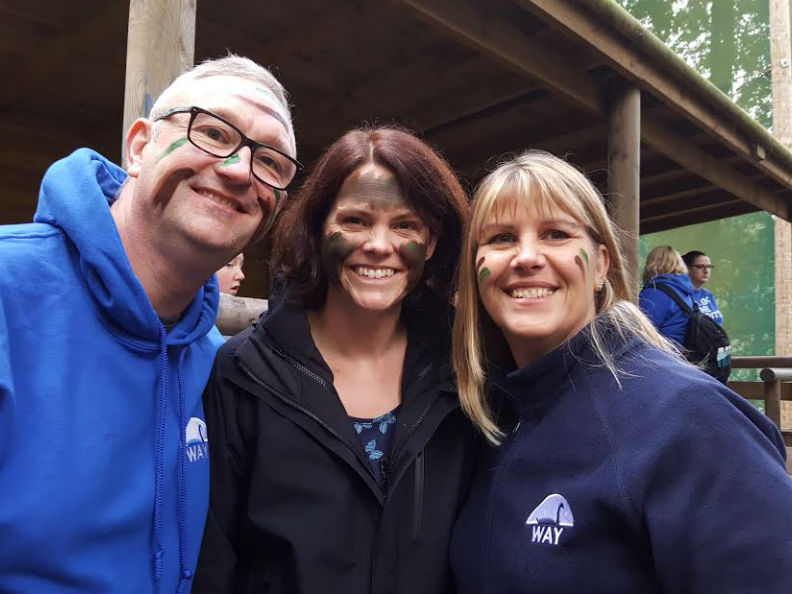 Parenting can be a frequent topic of conversation at WAY get-togethers, as many of its events are family-focused, but not everyone who is coping with the death of a spouse or partner has children. WAY-Woks (WAY Members Without Kids) is among the sub-groups within WAY: “For some people it’s a struggle, if they had no opportunity to have kids with their partner,” says Stuart.

Widowhood and grief support groups for spouses are most commonly associated with older people, which led WAY founder Caroline Sarll to launch the charity in 1997 when her sister Mandy was suddenly widowed, aged 35. Founded to help those aged up to 51 to support each other in rebuilding their lives after the death of a partner, the number of younger people joining is increasing.

Coping with the loss of a partner at a young age

“When I joined, there were not a lot of people in their 20s and 30s, but now it’s getting younger and younger. What brings us together is being widowed, full stop,” says Stuart, who explains that people don’t have to have been married or in a civil partnership to be a part of the WAY community. Anyone in the UK who has lost a partner before their 51st birthday is welcome to join.

“A lot of our members are cohabiting couples,” says Stuart. “A lot of them who are not married have lost out, which is unfair. Parents will lose out, long term. After all, the benefit’s based on the National Insurance Payments paid by the late partner, at the end of the day.”

As a trustee on WAY's board, Stuart does not have a campaigning role within the charity, but applies his organisational skills to arrange holiday breaks and weekend activities that attract members from all over the UK.

“It can be daunting to go on holiday when you are a widowed parent surrounded by families,” he says.

“We do Centre Parcs, youth hostels and forest holidays. It’s good to go away and for the kids to be free to be themselves. They meet new children coming into the fold and see old friends. It’s good for the kids’ wellbeing and, with other kids who have lost a parent, they can talk freely. Most schools are really understanding about time off.”

WAY’s weekends away and camping trips give children who’ve lost a parent an opportunity to go wild and have carefree fun, forming friendships and connections with other kids to whom they don’t have to explain what they’ve been through.

In an informal environment, children will often express thoughts and feelings with each other that they may find hard to share with parents grieving the loss of a spouse or partner.

“They’ll be playing, then one kid will start talking about their parent and they’ll have a whole conversation,” says Stuart. “My kids have really benefited.”

Besides knowing their children are supported and healing through WAY, being among other adults who really know how talk to someone who is coping with the death of a spouse or partner is important for widows who join WAY. As Stuart says, there are fewer eggshells to negotiate – everyone just gets it.

While WAY is about bringing widowed people and families who’ve lost a parent together, closer relationships can and do develop from friendships forged through its socials. Yet much loved, much-missed partners continue to be a part of new family dynamics.

“Some people say it’s like an extra person in a relationship when you’re widowed,” says Stuart who met his fiancée, Colette, at a WAY event two years ago and is set to marry her in August.

“Non-widows may get jealous when you celebrate what we call ‘Sadversaries’ – birthdays, anniversaries and the like. There’s always the issue that there’s someone else in your life, but widows get that.

“We were on holiday on Colette’s wedding anniversary, so I got a bottle of champagne from the bar to celebrate. I think you can understand it more, and support each other.”

The couple moved in together a year ago, and with Colette’s three children as well as Sam and Sophie, they are now a happy family of seven. But they plan to remain a part of the wider WAY family after they tie the knot. 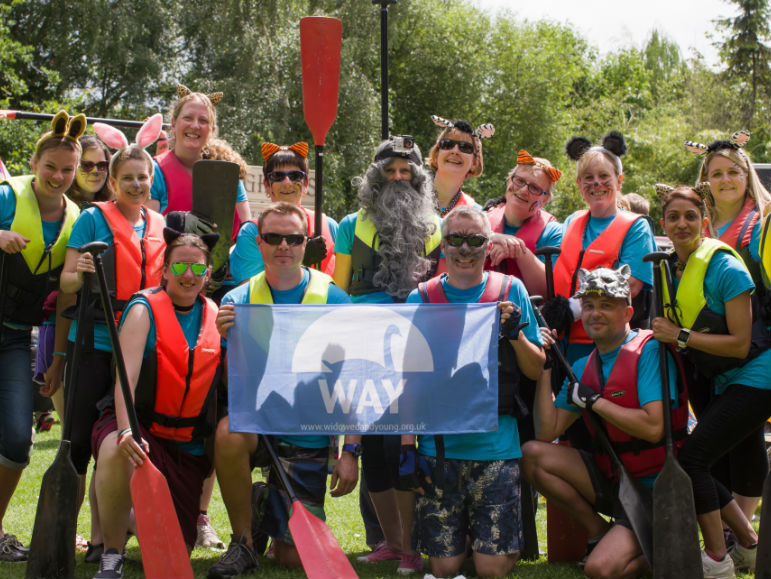 With lots of community events planned for WAY members to come together and regular local meet-ups throughout the coming year, the charity also recently launched a telephone helpline to support the bereaved with practical help and advice. There are plans afoot to offer face-to-face counselling for members, too.

With no government support, WAY depends on membership fees, fundraising activities and generous donations from friends of the charity, to cover the cost of its services and discretionary support for families who might otherwise not be able to pay for its weekends and holiday breaks.

A £15,000 donation from Victim Support helped build its website and members-only forum, while another generous donation from a WAY member enabled other people’s kids to go free on an activity-packed family adventure weekend.

“People run the London Marathon, while a group of WAY members (pictured above) has taken part in a Dragon Boat race – there are lots of events – and there are always raffles at our weekends,” adds Stuart.

Find out how you can fundraise, or how WAY could support you, a friend, or family member grieving the loss of a spouse or death of a partner, at www.widowedandyoung.org.uk.