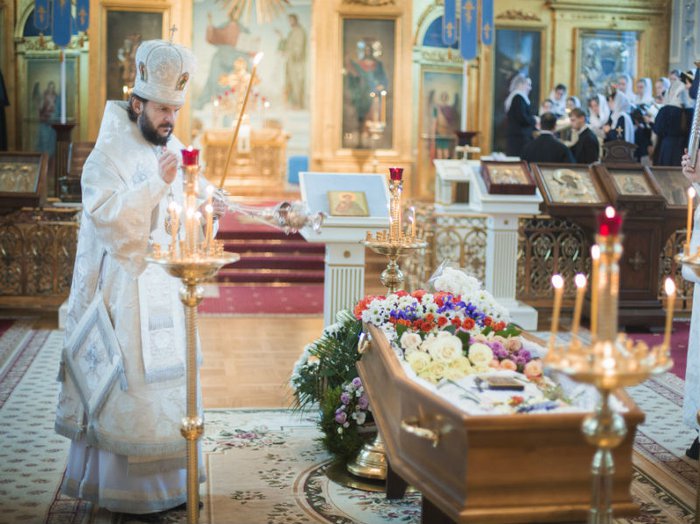 Russian Orthodox funeral ceremonies are a sight to behold, from the glimmering gold icons of the churches, burning incense and candles, to the piles of fresh flowers laid in the coffin. Every element of the funeral service is steeped in ornate ritual and imbued with meaning.

More than three-quarters of Russians follow the Russian Orthodox Church, which has highly-structured funeral rituals to guide the soul of the person who has died. The Orthodox Church, however, is not the only cultural influence that makes Russian death traditions what they are. 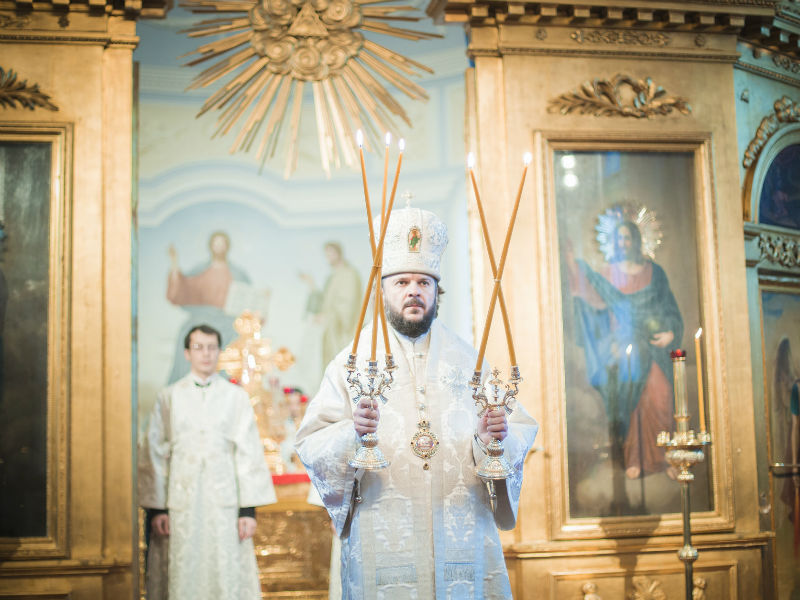 Russian folk culture can still have an influence on 21st century rites. Many superstitions, traditions and spiritual beliefs from older Christian and other faiths have been passed down through generations and influence modern funeral rituals. Some Russian households are ‘dual-faith’, following aspects of Christianity and folk religion at the same time.

These religions, which can vary from region to region or even village to village, are sometimes polytheistic, meaning many different gods may be worshipped. According to some Russian folk religions for instance, small hairy spirits called domovoi inhabit every household and may become angry if the house is neglected or unclean. 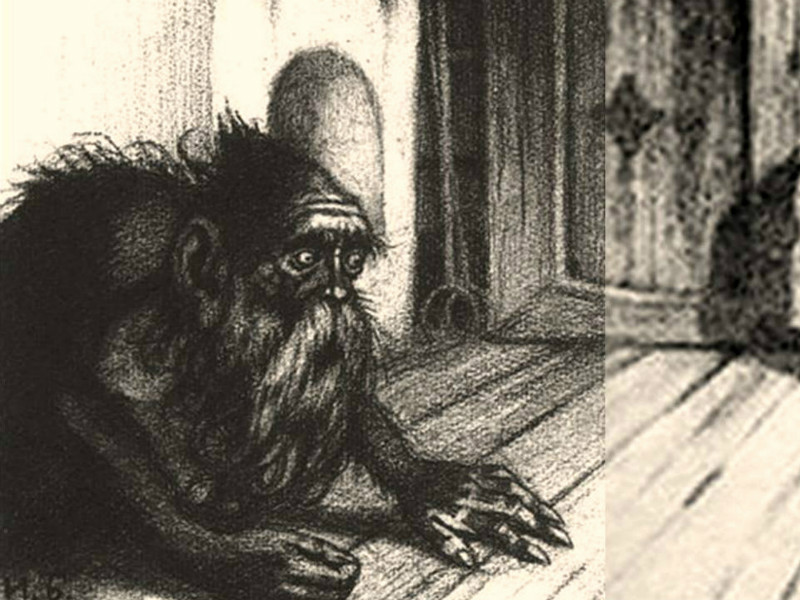 An illustration of a domovoi, a house spirit from Russian folklore, which guards the homestead.

In Russian folk tradition, there can be such a thing as a ‘good’ or ‘bad’ death, which may influence other events. A good death, for instance, may be when a person dies of old age at a time God has planned for them, surrounded by their loved ones. A bad death may be unexpected or violent. While a good death is associated with good harvests, bad deaths may bring storms, droughts and other misfortune.

When someone dies, they are washed and dressed, traditionally, in white. In folk culture, these white robes would be left unhemmed and unfinished, as a sign that they belong to the ‘other world’, a world of the ancestors. White is also a traditional Orthodox choice, representing purity.

A headband made of paper or cloth is placed on the person's forehead, adorned with the prayer “Holy God, Holy Mighty, Holy Immortal, have mercy on us.”

Historically, a belt would also be fastened around the person who has died. A belt is deeply symbolic in both folk and Orthodox culture, as it represents order and protection. The colours and styles of belts represented different things and could vary according to local tradition. For example, midwives in some villages would tie a red thread around a baby’s belly as its first belt – red being the colour of vitality and life. In many regions, black or blue belts, symbolising death, were placed around the waist of those who had died.

Traditionally, the person who has died will be laid out in their home for three days, while the family makes funeral arrangements and pays their respects. In the past, people were usually laid on the dining table, but nowadays many people choose a casket for their loved one instead.

In many Orthodox Russian households, there will be an icon corner. This is called the Krásnyj úgol, meaning the red, shining or beautiful corner. This is a kind of home altar, where ornate pictures of saints are displayed, sometimes with lit candles and crosses. According to Orthodox funeral traditions, the person should be laid out so that their head is the part of their body which lies closest to the icon corner.

Followers of the Old Belief, a pre-1665 Orthodox Christianity, tend to position their loved ones with their feet towards the icon corner instead. Old Believers, who are also known as Old Ritualists, are especially mindful of funeral etiquette – it is believed that incorrectly performed rituals could disturb the dead.

When a follower of the Orthodox Church dies, a priest will recite the First Panikhida, a special memorial service. The Psalter, a religious text containing the Book of Psalms, is also read, unless it is a priest who has died. When a priest dies, the Gospel is read.

During the funeral service, the mourners circle the open coffin in an anti-clockwise direction, taking the time to kiss the person who has died, or lay flowers upon them. The priest may sprinkle soil and holy oil into the coffin, before pulling up the person's burial shroud to cover them. 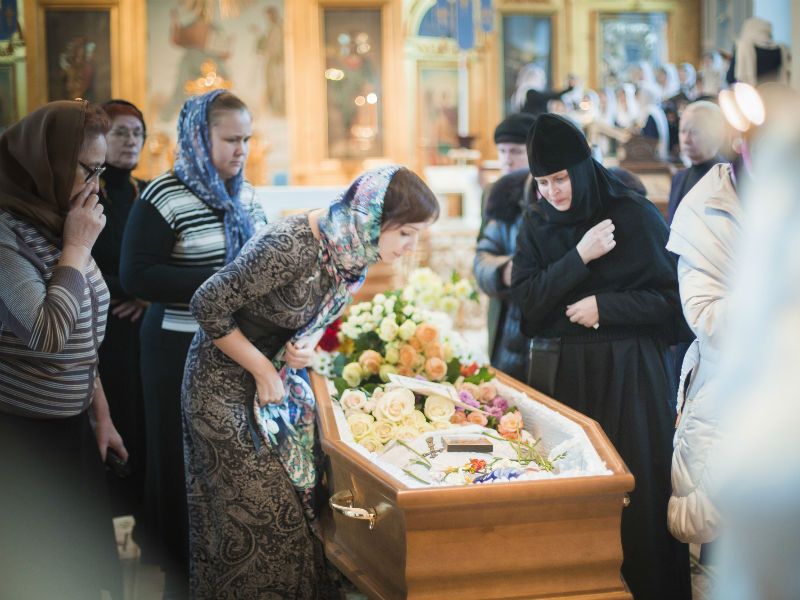 Mourners circle around the coffin to say goodbye. Photo by Saint-Petersburg Theological Academy via Flickr.

Once the church service has ended, mourners will follow the coffin to the cemetery and attend a short service at the graveside before the burial. According to Russian folk tradition, people would throw branches of fir and juniper as the funeral procession passed, to cover the mourners’ tracks. They would also follow a different route home after the burial – these precautions were intended to confuse any lingering evil spirits.

Like other Christian funerals, there is usually a reception after the traditional Russian funeral service and this usually takes place at the family home. Food and drink is offered to mourners in a memorial meal known as pominki. Traditional foods served at this gathering include a type of pancake called blini, fish pie and Kolyva, a dish made of wheat and fruit.

Kolyva, which is also known as Kytia, is sometimes formed into a domed cake-like shape and decorated with sweets. Candles are placed on it and it is blessed before it is eaten. Kolyva is a deeply symbolic food, reminding mourners about Bible passages which reflect life, death and renewal, including this verse from the book of John: “Except a corn of wheat fall into the ground and die, it abideth alone: but if it die, it bringeth forth much fruit.” 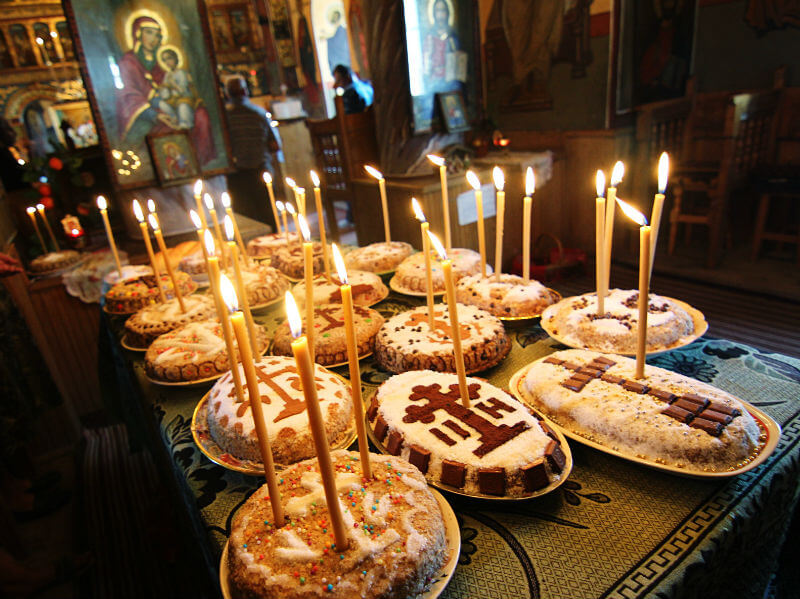 Commemoration is also particularly important for people who follow the Orthodox Church. The third, ninth and 40th days after the death are significant times for mourners to formally remember their loved one. Half-anniversaries and anniversaries are also important dates for the bereaved. On these days mourners will pray, give alms to the poor, and sometimes eat Kolyva.

Commemoration and remembrance have also been a part of Russian folk traditions. In some places, it was believed that the soul of the person who had died would still wander for 40 days after their death. A towel and cup of water was kept on the window sill during this time, so that the loved one could revisit their home to wash and have a rest. At the end of the 40 days, the towel would be shaken out at the cemetery to ‘release’ the soul, and then burnt or cast into a river.