The illuminating art of dying in the Middle Ages 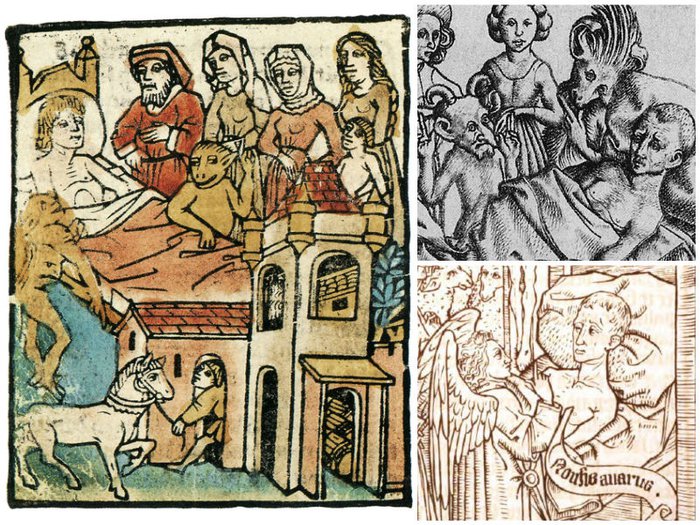 The late Middle Ages were a time of uncertainty, upheaval and death. Plague and almost constant warfare had killed people in their millions across Europe and people turned to their faith for reassurance. Educated men of the Christian Church realised that people needed practical guidance in the face of death. The answer was an illustrated guide to death, known as Ars Moriendi, or the Art of Dying.

In 1415, an anonymous Dominican friar – following the teachings of the Spanish priest Saint Dominic of Caleruega – set to work on the handbook for dying. Written in Latin, the text was designed to help priests support people through their final days, offering spiritual guidance and practical advice.

In medieval Europe, death was ever-present. Bubonic plague, also known as the Black Death, killed over 20 million people – two-thirds of Europe’s population. Famine struck repeatedly and throughout the 1300s and 1400s barely a year went by without conflict, rebellion and war. Facing so much death and destruction, people looked to religion to help them understand what happened at the end of life.

Written in Latin, Ars Moriendi would have primarily been read by priests and scholars, some of the very few people who would have known how to read and write. Priests would then be able to pass this knowledge on to Christians who were dying, and their families, to ensure they were prepared for divine judgment in the afterlife.

Ars Moriendi was split into six chapters. The first four were focused on the spiritual needs of the dying. The text reminded them to have faith in Christ’s love and steered them away from temptation, preparing them to go to Heaven after death. The last two chapters were for family and friends, instructing them how to behave at their loved one’s bedside and suggesting ways to pray for their immortal soul. 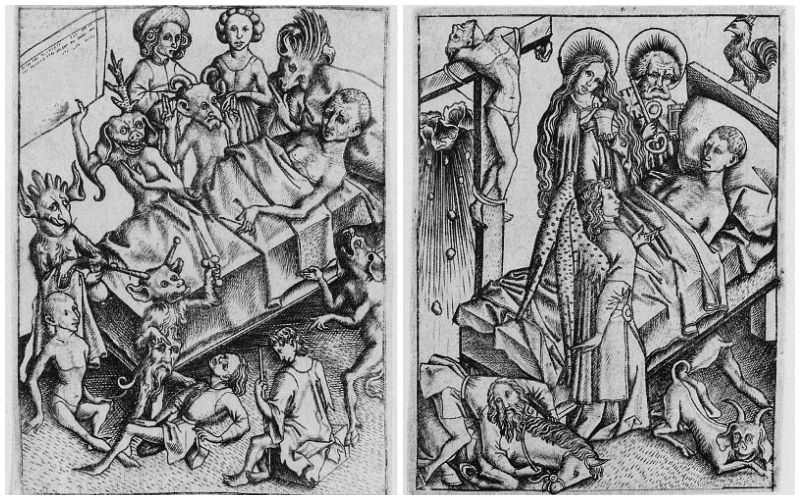 Illustrations for a mid-century edition of Ars Moriendi, by the unidentified German printmaker Master E.S. These two pictures show the temptation to despair and triumph over despair.

Due to the text’s popularity, a shorter version of Ars Moriendi was written in 1450, focusing on five temptations that may have been common challenges for Christians in their final days. These temptations were: 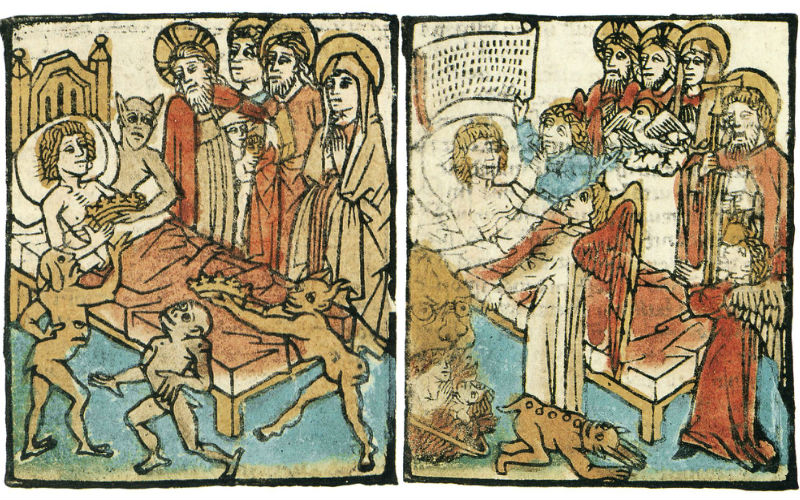 Illustrations from a 1460 adaptation, printed by Schneider Ausgabe XII. On the left, the dying person is tempted by pride, and on the right they find salvation through humility.

In this shorter version of the book, each temptation is accompanied by a pair of woodcut illustrations – one showing devils tempting a dying man, and the second showing the man resisting temptation with the help of angels.

These two versions of Ars Moriendi were immensely popular throughout Western Europe. They were among the first books widely produced through the movable type printing press, brought to Europe by Johannes Gutenberg in the mid 1400s. Before the end of the century, there had been nearly 100 revised editions, adaptations and translations distributed across France, Germany, Italy, Spain and Britain.

In 1490, Ars Moriendi caught the attention of William Caxton. Responsible for introducing the revolutionary printing press to England, Caxton was Britain’s first retailer of printed books and the first person to ever print a book in English.

Caxton put his other work on hold in order to translate a French version of Ars Moriendi into English. In June 1490 he printed it under his own title, The Art and Craft To Know Well to Die. Caxton’s version was likely to have been one of the first copies of Ars Moriendi written in English. 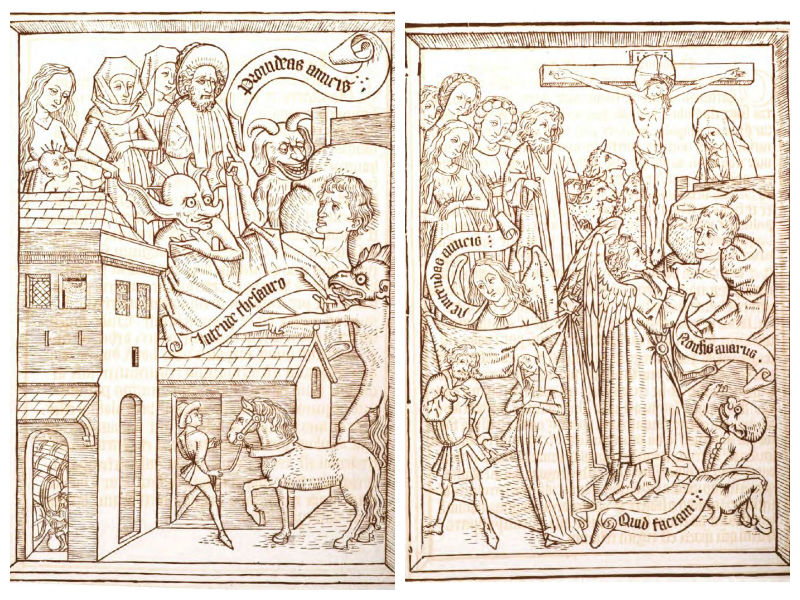 Woodcut illustrations by Weigel. The dying Christian is tempted by greed and then triumphs over the temptation, surrounded by angels.

The popularity of Ars Moriendi continued well into the 17th Century and beyond. In 1651, the Church of England decided to put its own spin on the original Latin Ars Moriendi. A cleric called Jeremy Taylor penned two books called Holy Living and Holy Dying. The books earned him the nickname ‘the Shakespeare of Divines’, thanks to his poetic writing style.

But Taylor was not the last to re-envisage the Ars Moriendi. The Catholic Church of England and Wales has recently launched a new website called the Art of Dying Well, inspired by the medieval books. The interactive site, filled with personal stories, resources and advice, is a thoroughly modern guide to facing the end of life for people of any faith, or no faith.

With a legacy spanning over 600 years, Ars Moriendi is as relevant as ever, albeit in a new, digital form. The medieval handbook on dying has been resurrected, living on into a new millennium, but still providing spiritual comfort and guidance to people at the end of their lives.

You can download a facsimile of Caxton’s Ars Moriendi on Google Play for free. You can also browse 15th Century editions of the book via Digital Bodleian.