The art of memento mori 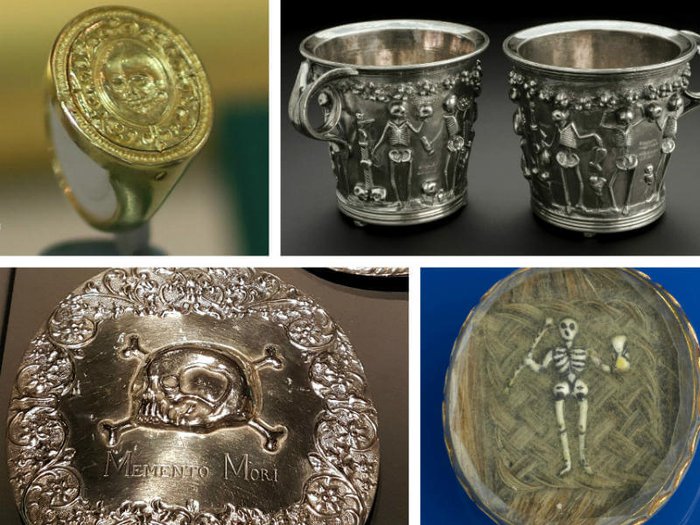 A collage of memento mori: A gold memento mori ring, replica Roman silver cups deocrated with skeletons, a 17th Century brooch made from hair depicting a skeleton with hourglass, and an 18th Century silver memento mori plaque with skull and cross bones.

Memento mori are an enduring tradition in Western European culture. These works of art, sometimes small and beautiful, sometimes imposing and magnificent, served and serve as a reminder that all humans, no matter their differences, will one day die.

What is a memento mori?

A memento mori is something which is designed to remind people of mortality; whether that’s a piece of jewellery that reminds the wearer of their own mortality, or a painting that contains elements that visualise and symbolise the concept of dying.

What does memento mori mean? 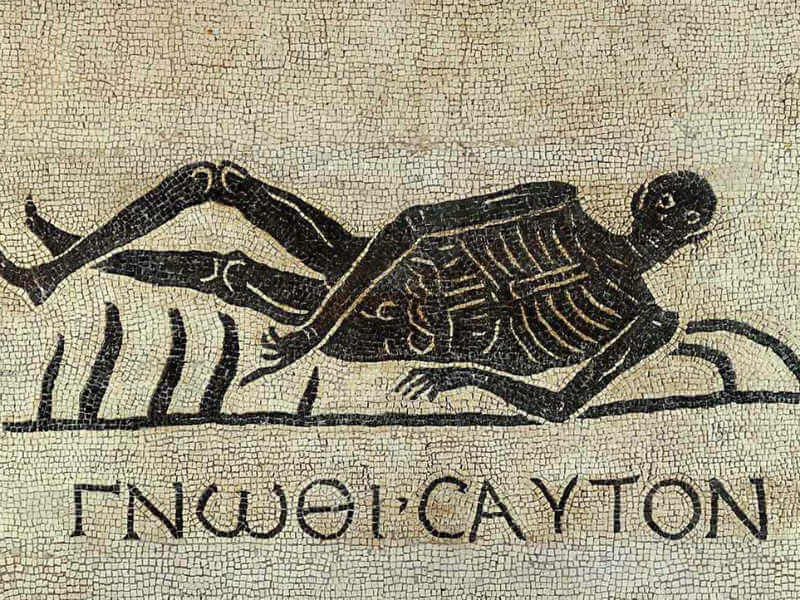 A Roman mosaic, circa 1st Century AD. The Greek inscription reads ‘Know thyself’, meaning know that you are mortal.

The phrase memento mori is Latin and literally translates as ‘remember that you will die’. It has also come to mean a token, object or piece of art that serves as a reminder of mankind’s mortality.

What forms do memento mori take?

Memento mori art is one of the most recognisable forms. Memento mori artists include elements such as skulls, bones and representations of death or the grim reaper in their works.

The elements that make up memento mori artwork can be seen in works throughout history, wherever death is represented, but it’s more specifically noted in artwork from the 16th century onwards.

Memento mori sculpture is another popular form used by memento mori artists and has some common elements, such as a two sided sculpture where one side is the face of a living person and the other is a skull.

Memento mori jewellery has had periods of widespread popularity throughout history and even today, mourning jewellery has a wide market. The Victorians were very fond of creating pendants, rings, brooches and necklaces with representations of death and dying on them to act as memento mori.

Memento mori architecture is another popular form of memento mori. If you look through any graveyard or around any cathedral, you’re bound to see a representation of death or dying. Whether that’s designs on grave stones or sculptures on famous mausoleums, reminders of mortality are all around. 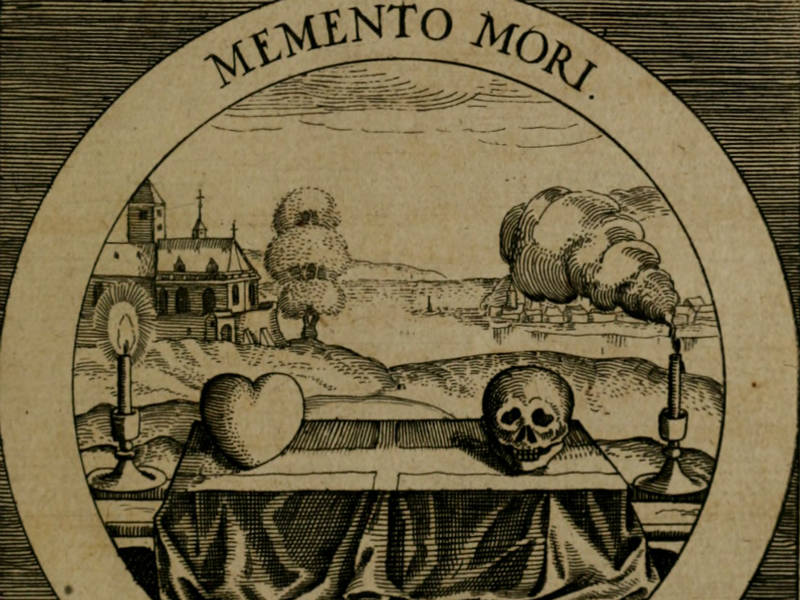 An illustration from 'Emblemata Sacra' by Rev. Daniel Cramer, 1624. Here the memento mori is used as a Christian symbol.

Where did memento mori come from?

It is believed that the practice originates in Ancient Rome. When victorious generals returned home from war and were given glorious parades in their honour, it is said that one slave would always walk behind the general, saying, “Respice post te. Hominem te memento,” roughly translating to ‘Look to what comes after you. Remember you are just a man.’ 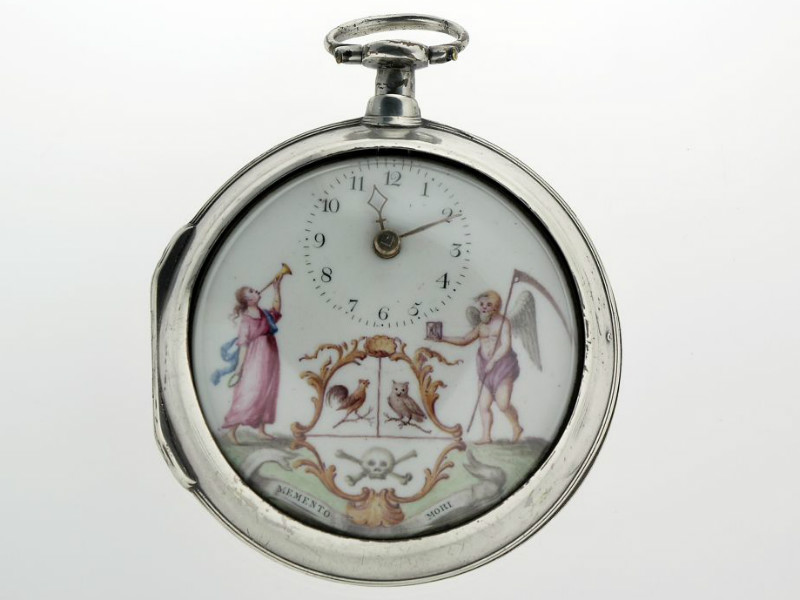 A silver pocket watch from 1791. The face shows a winged figure holding a scythe and hourglass, as well as the words ‘memento mori’. Photo by Birmingham Museums Trust.

In the Middle Ages, this idea resurfaced and was used in a Christian context to remind churchgoers that the afterlife awaited them. Church walls were adorned with elaborate memento mori art with paintings of skeletons and skulls, often showing kings, priests and peasants all being led by the hand by Death, demonstrating that no one was immune from the effects of time.

What was the reason for memento mori?

Memento mori primarily had a moral and religious purpose: to remind its owner or viewer that the afterlife awaited, and to not be overly attached to material pleasures, in light of the prospect of divine judgment. 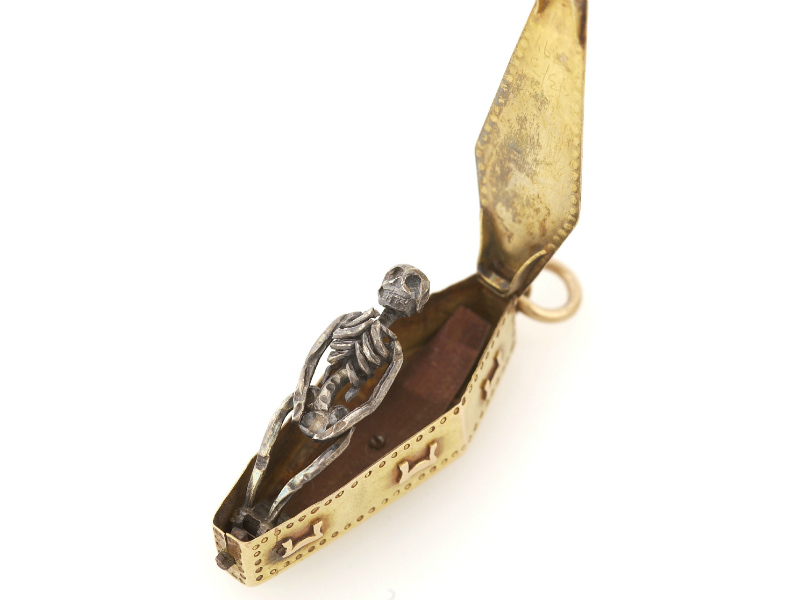 A gold coffin-shaped locket to be worn as a necklace, containing a miniature skeleton, from the 18th Century.

When were memento mori most popular?

Memento mori became especially popular in the 16th century, and people began carrying their own personal memento mori everywhere in the form of pocket watches, lockets and jewellery.

This practice continued to be popular throughout the 17th, 18th and 19th centuries, with Victorians adding their own style to the long-running tradition.

Are memento mori popular in the modern world?

Memento mori are not as popular as they were in the Victorian era and before, but they still have some presence in society.

In the 21st Century, when death rates are down and people are living longer and longer, it’s easy to postpone any worries about the end of life. Indeed, in recent decades, Western society has become less and less familiar with death, to the point where it has become a taboo to talk about it. 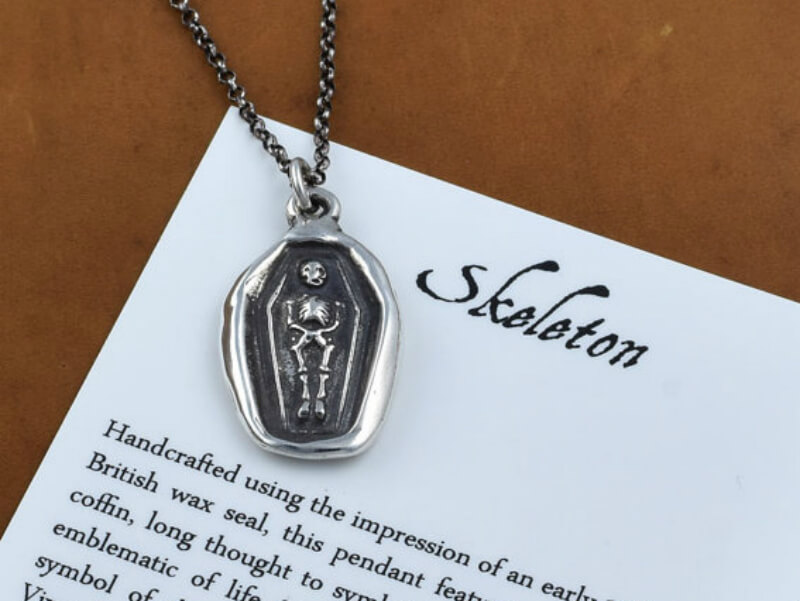 Modern replica of a 19th Century wax seal made into a memento mori necklace. Available on Etsy.

What are the benefits of having a memento mori?

A memento mori can help you focus on the importance of living your life to the fullest, by being aware of your own mortality. The death positive movement champions the idea that it is not only important, but beneficial to think and talk about the end of life.

It can have a positive impact on your emotional well-being, ensure you get the care you want in your final days and, perhaps most importantly, give you a greater appreciation for life.

Perhaps this ancient practice deserves a revival. There’s no shortage of ornaments, jewellery and tokens out there that could act as a modern-day memento mori.