The history of burial in Britain 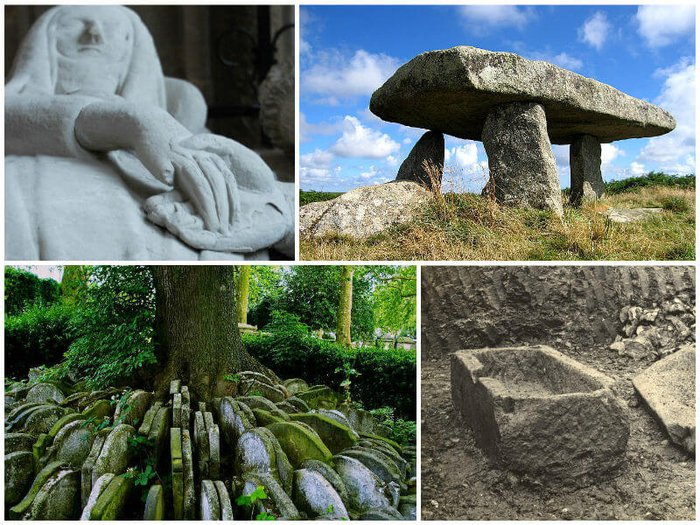 People in Britain have placed great importance on burial rites and funeral rituals for thousands of years. It’s one of the most common ways of laying a loved one to rest in our country’s history and continues to be hugely significant for many people living here today.

These 8 different types of grave trace the rich history of burial in Britain, across more than 35,000 years. What can the burial practices of the past tell us about how we mourn and memorialise today? 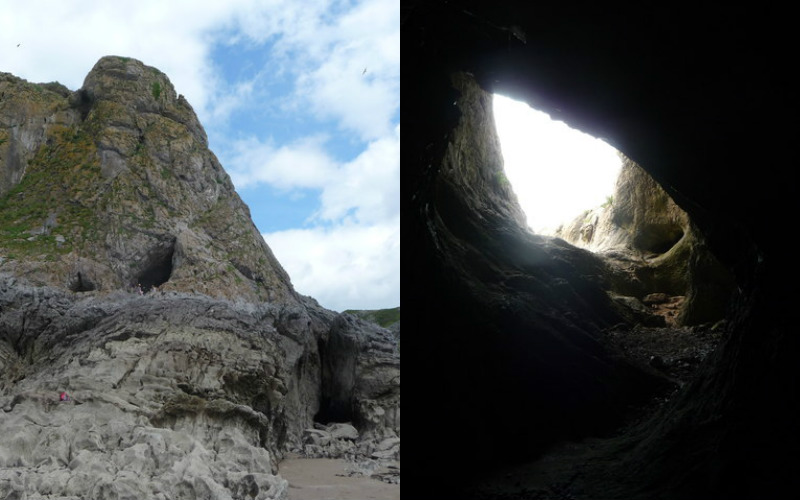 Paviland Cave on the Gower Peninsula. Photos by Jeremy Bolwell via Geograph.

In 1823, famous geologist and palaeontologist William Buckland ventured into Paviland Cave on the Gower Peninsula, South Wales. His team excavated human bones, which had been dusted in red ochre and ceremonially buried inside the cave.

Buckland believed it to be the body of a Roman woman, which led her to be dubbed the Red Lady of Paviland, but recent analysis and carbon dating has revealed it to be much older and, in fact, a young man, probably a tribal chief or other important figure. The burial chamber in Paviland Cave is one of the oldest ceremonial burials discovered anywhere in Western Europe, providing some of the earliest evidence of funeral rites in Britain. 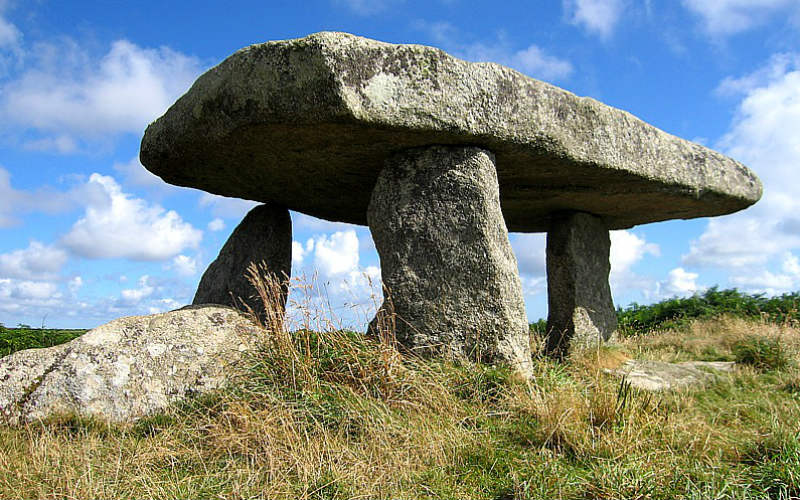 Lanyon Quoit, an early Neolithic dolmen that was rebuilt in 1815.

During the New Stone Age or early Neolithic period, around 6,000 years ago, large monuments to the dead started appearing in parts of Europe and Britain. Archaeologists believe that these imposing structures, often positioned atop large hills, represented a sacred link between the living community and their ancestors.

These monuments often took the form of long barrows, while others were ‘dolmens’, constructed by laying a large slab of stone upon several upright stones. One such dolmen is Lanyon Quoit in Cornwall. Originally Lanyon Quoit stood tall enough for a person on horseback to ride underneath. In 1815, a violent storm caused the ancient stone structure to collapse and although it was rebuilt, it lost some of its original height. 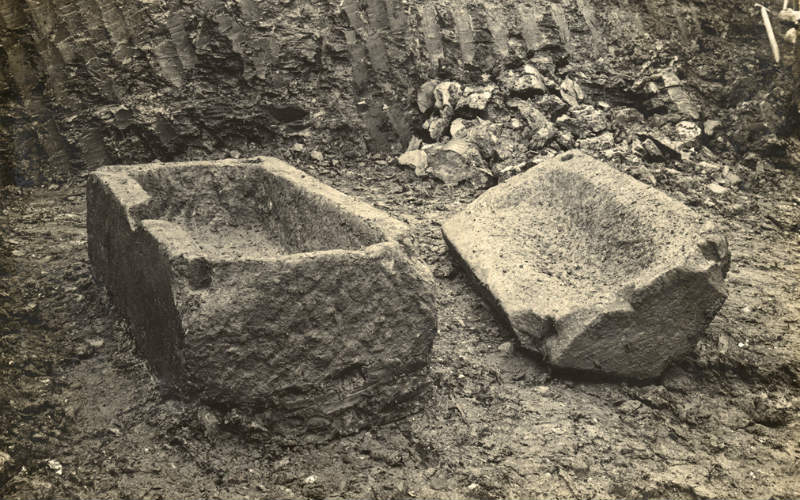 Roman coffin at the excavation site in Newcastle.

From 55 B.C. onwards, Romans gradually began to invade and conquer the British Isles, bringing with them their technology, culture, religion and funeral practices. Until their departure around 450 years later, Roman culture had a huge impact on Britain and plenty of evidence remains of their centuries spent here.

Although Romans favoured cremation, burial was not unheard of. This stone coffin was one of two discovered in 1903, during construction on the banks of the River Tyne in Newcastle. One of the coffins contained a pottery beaker; the practice of placing grave goods in coffins and graves like this has been widely observed by civilizations the world over. 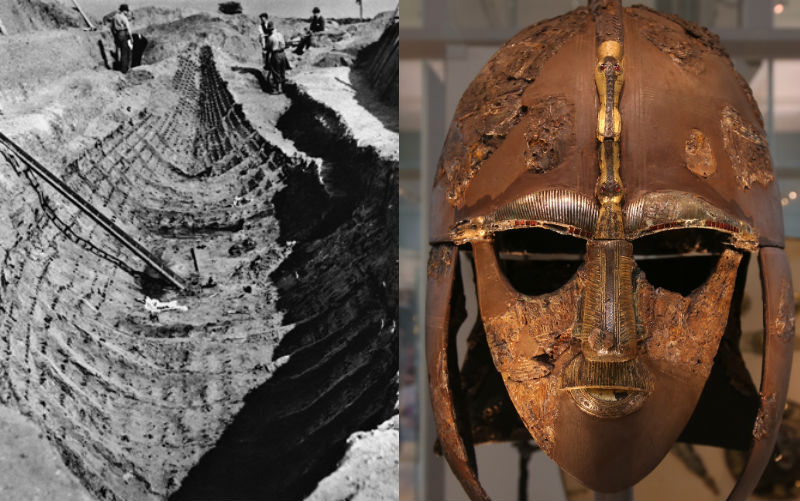 Excavation site at Sutton Hoo and the famous Saxon helmet discovered there. Photo by geni via Wikimedia Commons.

Excavated in 1939, Sutton Hoo near Woodbridge in Suffolk is one of the most impressive and significant historical burials ever discovered in Britain. It is an example of a ship burial, in which an important person was buried inside a whole ship, usually with treasures and artefacts.

It is speculated that the person buried at Sutton Hoo was Rædwald, King of East Anglia, due to the size and splendour of the burial. Apart from the iconic helmet discovered within the tomb, archaeologists found a ceremonial sword and shield, gem-studded gold accessories, a lyre, and silver from the medieval empire of Byzantium (modern-day Greece and Turkey). 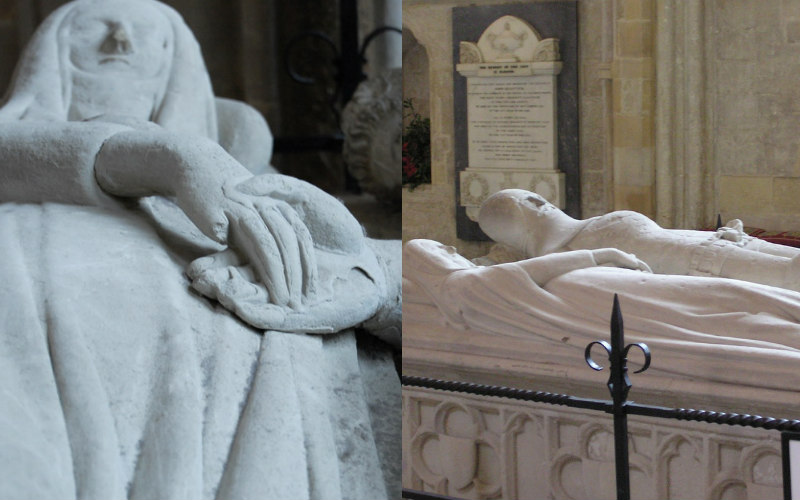 The Arundel tomb in Chichester Cathedral. Photos by Julian P Guffogg via Geograph and Richard Gillin via Flickr.

The Middle Ages introduced spectacular religious architecture never before seen in Britain. From Gothic arches to gilded icons, monuments to those who died became more complex, beautiful and impressive – at least for the wealthy.

The Arundel Tomb was originally built at Lewes Priory, until its dissolution by Henry VIII in 1537, when the tomb was carefully moved to Chichester Cathedral. It memorialises Richard FitzAlan, Earl of Arundel and Surrey, and his second wife, Eleanor of Lancaster. Richard FitzAlan is depicted in armour, with a lion at his feet. The sight of the two side-by-side inspired Philip Larkin to write his poem ‘An Arundel Tomb’. 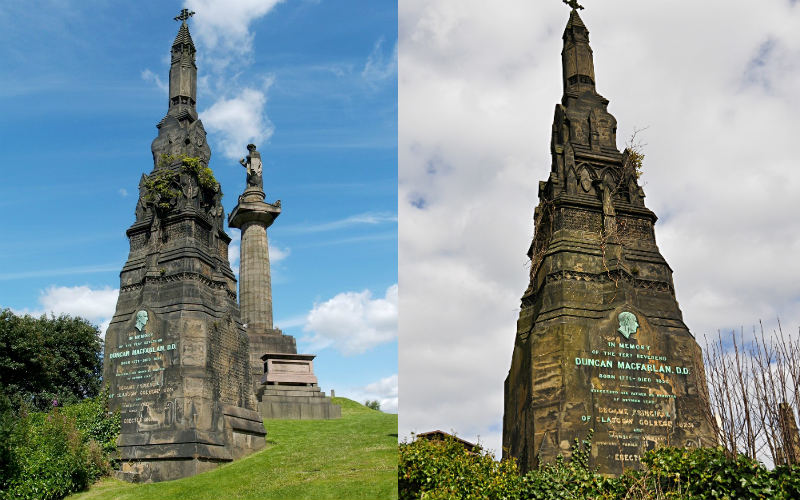 The Duncan Macfarlan memorial in Glasgow Necropolis. Photos by Lairich Rig via Geograph and Helen Simonsson via Flickr.

The Industrial Revolution began around 1760, changing the face of Britain entirely. Rapidly expanding urban populations meant that small churchyards could no longer accommodate burials for loved ones. In Victorian times, large cemeteries began to appear on the outskirts of cities; London had Highgate and Kensal Green cemeteries, while Glasgow had the Glasgow Necropolis.

Glasgow University principal Duncan Macfarlan’s memorial in Glasgow Necropolis is typical of Victorian funerary fashions. Funerals were important affairs and no expense was spared, and the rising trends in art for Gothic Revival and Neoclassical designs were reflected in the architecture of Victorian graveyards. 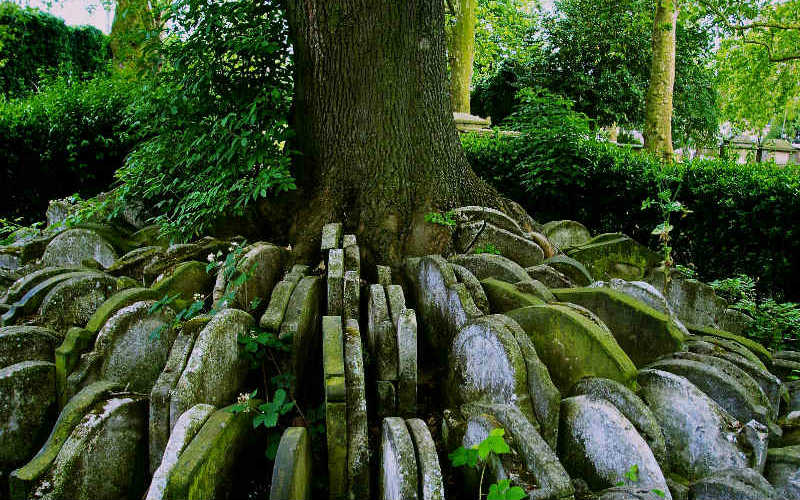 The Hardy Tree incorporates the gravestones of exhumed graves. Photo by Paul Hudson via Flickr

While new burials may have been taken care of by new city cemeteries in the Victorian age, progress was often hampered by older burial grounds, especially within London. As the railway network began to spread across the nation, it was often decided that the old had to make way for the new.

This ash tree can be found at St. Pancras Old Church. A young Thomas Hardy, who later wrote novels such as Tess of the D’Urbervilles and The Mayor of Casterbridge, was then employed by an architecture firm charged with clearing the burial ground to make space for the railway. The graves were moved and the ash tree has since grown around them, making it look as if the tree and the graves are one. 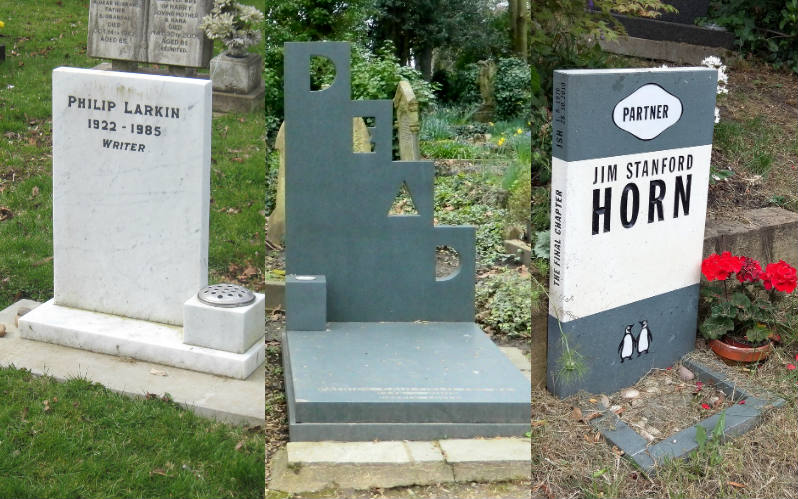 It’s no secret that cremation has now overtaken burial as the most popular funeral choice for a loved one in Britain. However, modern burial practices remain as reflective of society as our ancestors’ rites and monuments.

While some people opt for minimalist, traditional gravestones, such as poet Philip Larkin’s headstone (left), many people see the burial as an opportunity to memorialise and capture the personality of the person who has died.

Painter and printmaker Patrick Caulfield, who died in 2005, has a very modern and somewhat blunt headstone marking his grave in Highgate Cemetery, London (centre). The inscription ‘DEAD’ was his own choice and reflects the bold, pop art style of his artwork.

Also in Highgate Cemetery, the gravestone (right) of Jim Stanford Horn, who died in 2010, has garnered plenty of attention from visitors. Designed to look like a Penguin Classics book, the spine reads ‘The Final Chapter’. The eye-catching headstones of the past mainly incorporated religious symbolism, but it seems that modern graves are symbolic to us in different ways. It is a truly unique and very modern way of making sure the people we love have a place to be remembered.