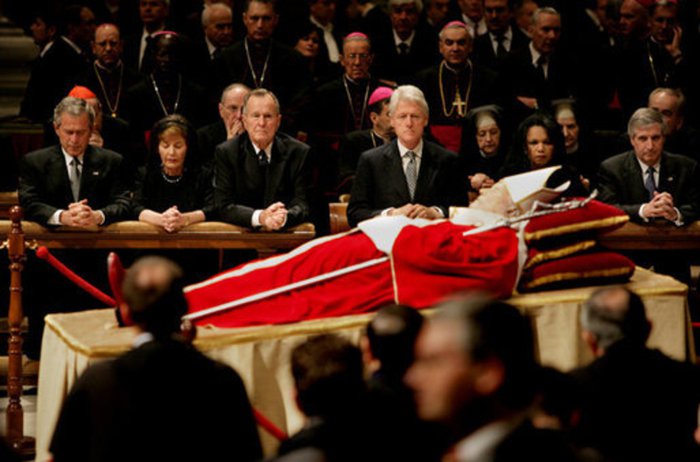 The funerals of famous celebrities often attract as much attention as events during their lives. Read our guide to some of the most funerals funerals around the world, including the funerals of Queen Victoria,John F. Kennedy, Winston Churchill, Princess Diana and Nelson Mandela. 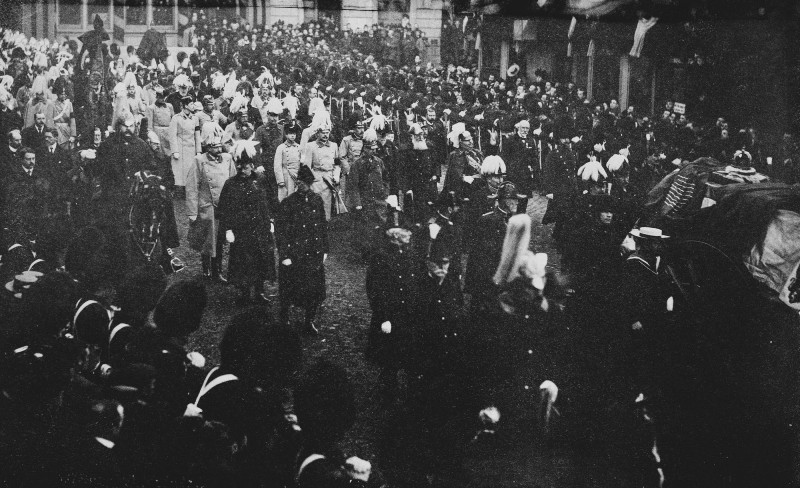 Photo by Russell and Sons on Wikimedia Commons

The state funeral of Queen Victoria was the first burial of a monarch since the death of her predecessor, William IV, in 1837. She was 81 years old and had requested a full state funeral, but, after 64 years on the throne, the UK was unprepared for her death and unsure of what was required for her send-off.

The clerical procession accidentally arrived at St. George’s Chapel an hour early; too few guests had been invited to sit in the nave and had to be hastily spread out by the official attendants; the horses pulling the gun carriage with her coffin broke from their harnesses and the naval guard had to drag it by hand into St. George’s chapel.

Queen Victoria’s funeral, however, was undoubtedly a magnificent occasion, which included a 2 hour procession involving 33,000 soldiers, and millions of mourners lining the streets.

As well as insisting on a state funeral, Queen Victoria also left instructions that the contents of her coffin should include mementos of her family, including the dressing gown of her beloved Prince Albert. 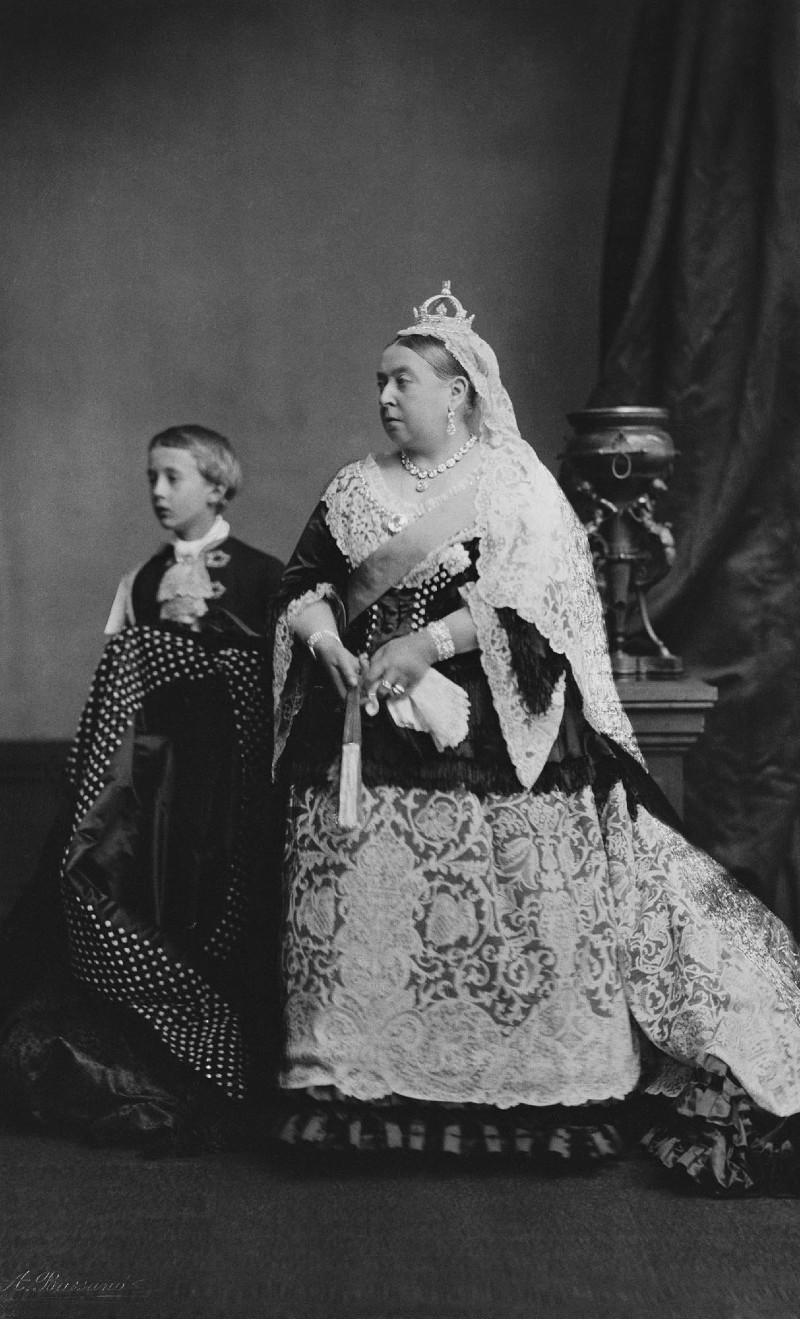 2. The funeral of Rudolph Valentino (New York and Los Angeles, 1926) 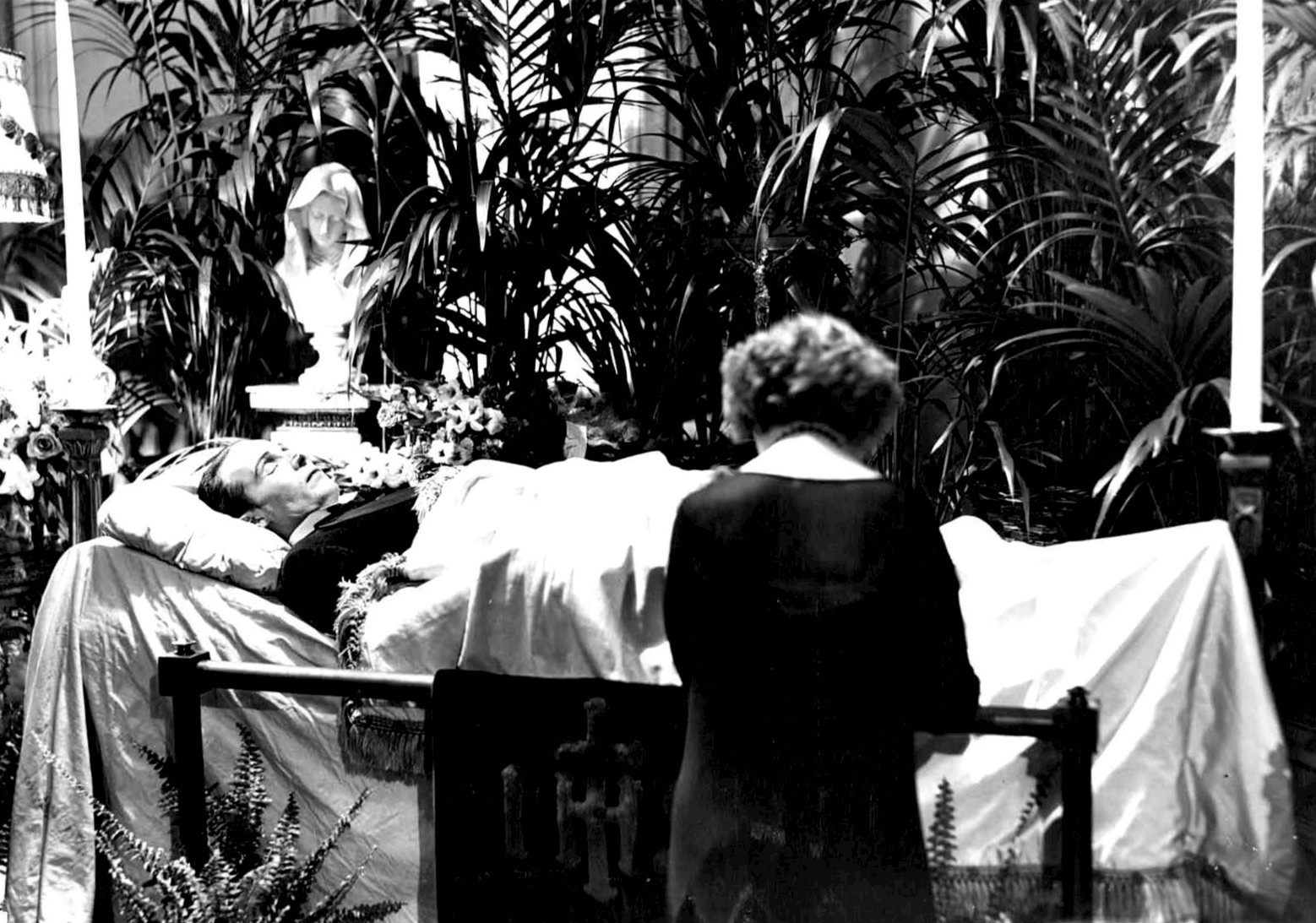 The funeral of Rudolph Valentino, the original 'latin lover' of silent cinema, was almost as dramatic as his films. The Italian-born actor was $3 million in debt when he died suddenly in 1926 at the age of 31. The executor of his affairs tried to raise money from the publicity of his funeral.

A public viewing of his body was arranged in New York, but so many people flocked to this final appearance that it became chaotic and people had to be turned away. After Valentino’s first funeral in New York, his body was moved across the country to Los Angeles, where a second funeral was arranged to attract attention, and money, from his adoring fans.

In consequence of his debts, Valentino was buried in a crypt ‘borrowed’ from one of his friends in the Hollywood Forever Cemetery in Los Angeles. 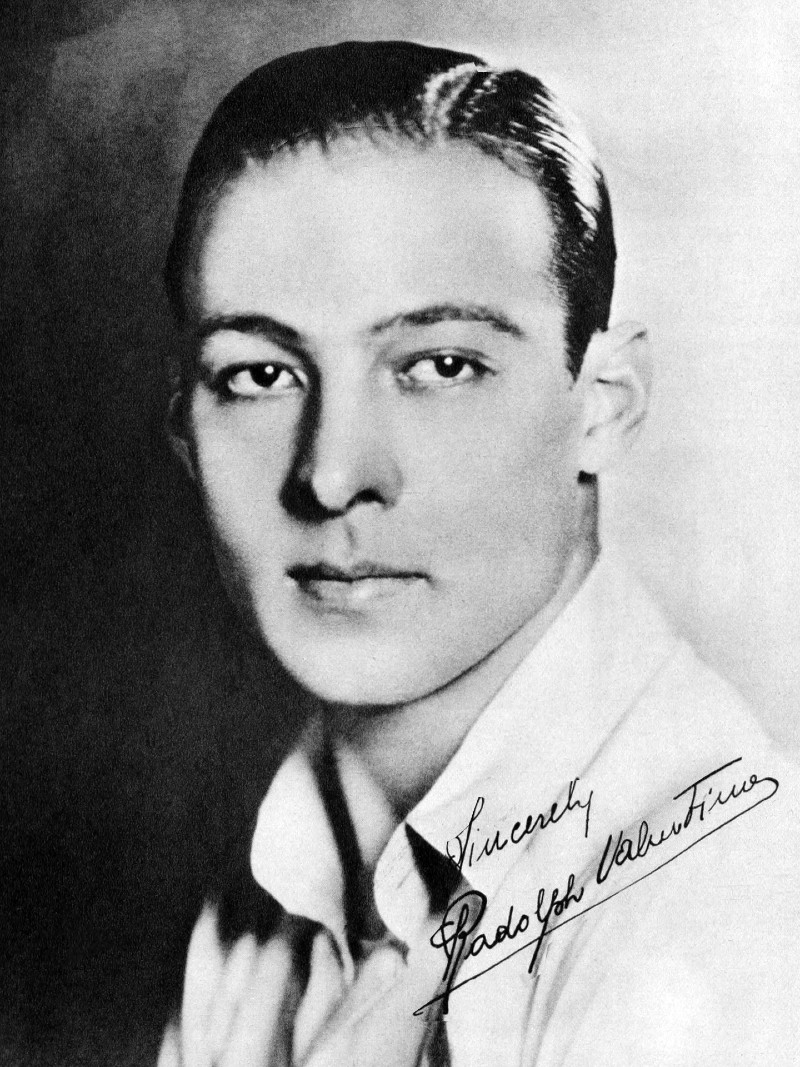 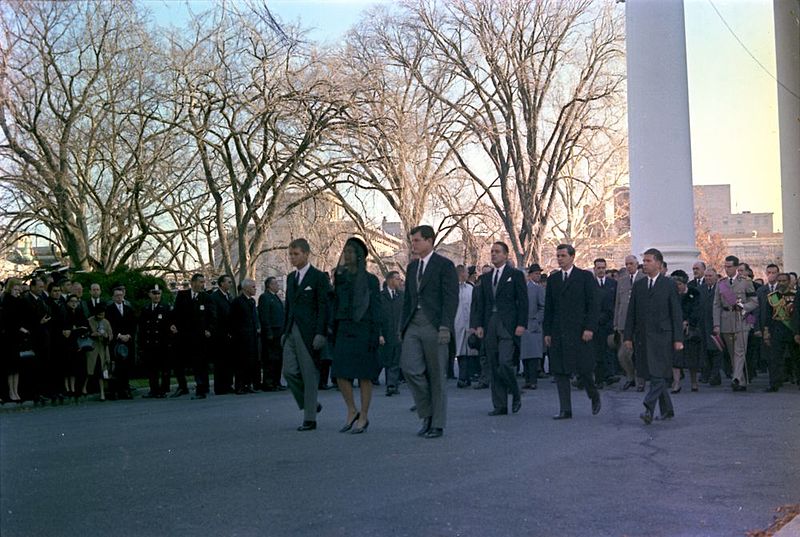 The state funeral of President John F. Kennedy (JFK) was a national day of mourning in the United States of America. 250,000 people paid their respects to the 35th president while he was lying in state in the Capitol.

On the day of President Kennedy’s funeral, a procession, led by his wife, Jackie Kennedy, and the presidents’ brothers, Robert. F. Kennedy and Senator Edward Kennedy, travelled from Washington National Cathedral for the ceremony. Millions of people in the USA and around the world watched Kennedy’s funeral on television.

Despite understandable concern from his advisors, the new president, Lyndon B. Johnson, also decided to march in the procession. John F. Kennedy was buried in Arlington National Cemetery with full military honours. An eternal flame was also installed on his grave at the request of Mrs. Kennedy.

The former First Lady later thanked Johnson for his decision to join her in the procession. 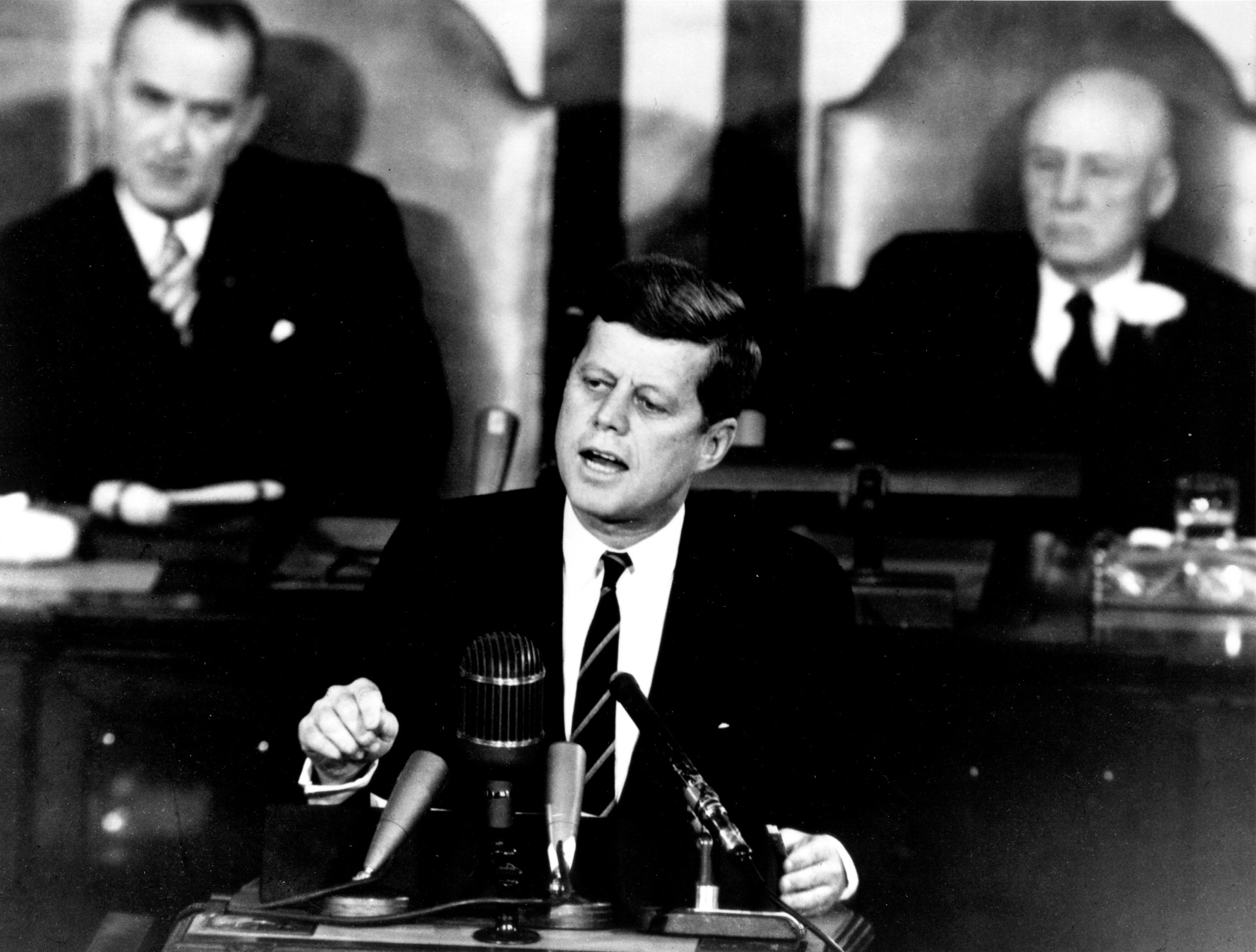 Photo by NASA on Wikimedia-Commons 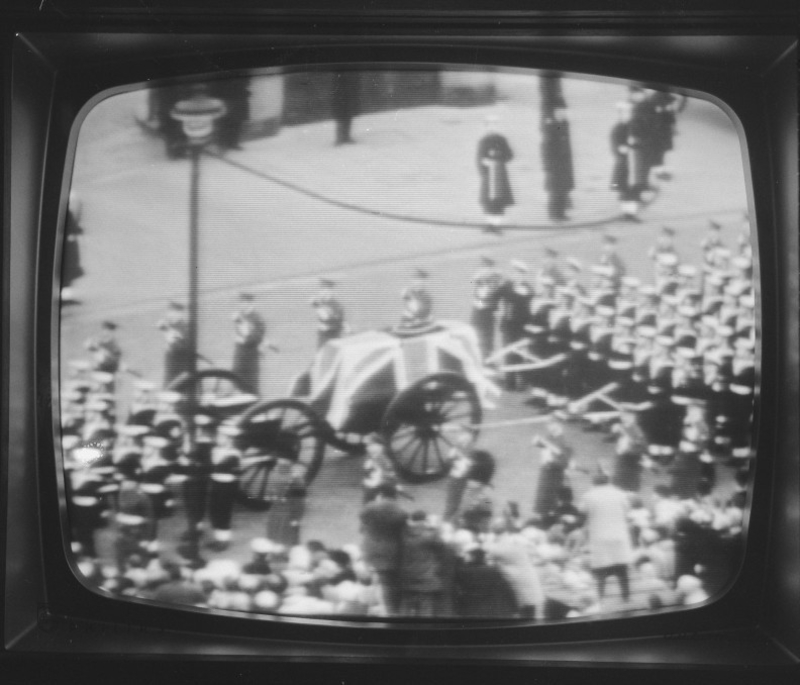 The funeral of Sir Winston Churchill was the most recent state funeral in the UK, and one of very few for people outside the royal family. Churchill’s body lay in state in Westminster Abbey for three days. 321,360 people waited in a mile-long queue to view his body.

The funeral procession commenced with a chime from Big Ben and was lead by a drum beat of the Royal Navy. The gun carriage carrying Churchill’s coffin, draped with the Union flag, was escorted by foot guards and airmen from the Royal Air force, carrying their arms in reverse (upside down).

The service in St. Paul’s Cathedral was attended by 3,500 mourners, including Queen Elizabeth II, who rarely attends funerals. Thousands of people lined the streets of London to watch Churchill’s funeral procession, and millions more watched it on television.

After the service Churchill’s coffin was placed on a boat and sailed up the Thames to Waterloo Station. The former Prime Minister’s final journey was on board a special train, the Winston S. Churchill, to his final resting place in Oxfordshire. 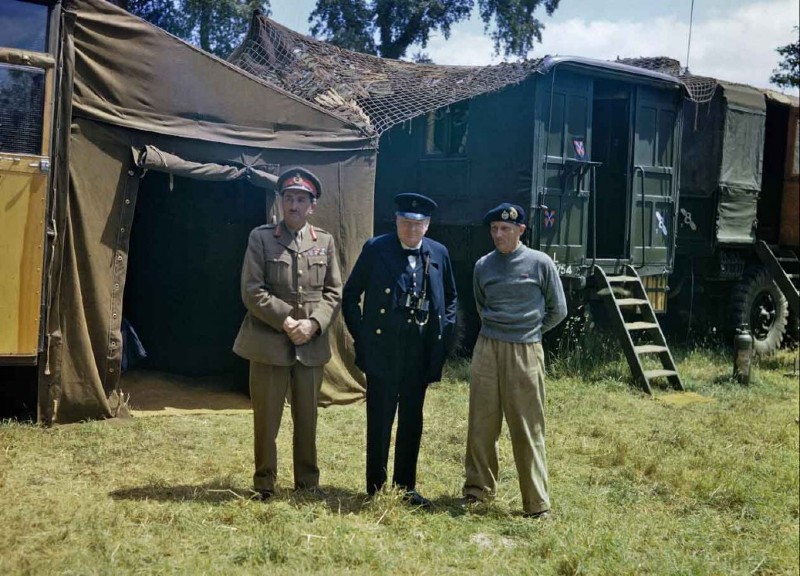 5. The funeral of Grace Kelly, Princess Grace of Monaco (Monaco, 1982) 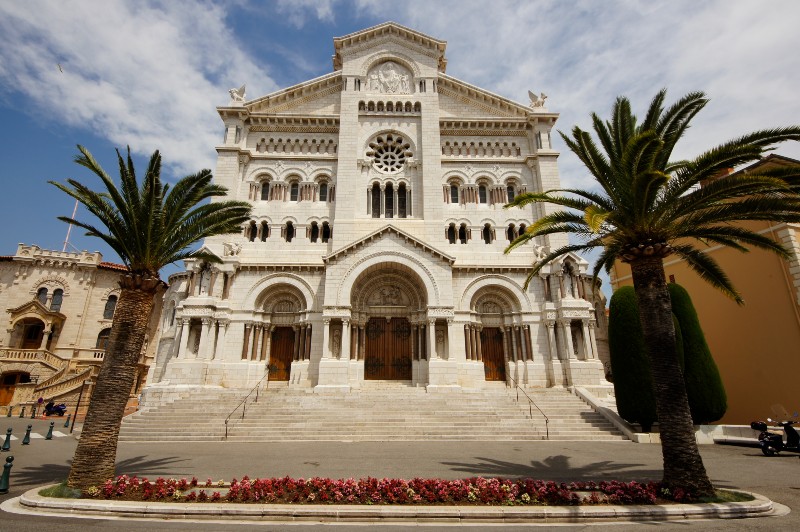 In his eulogy for Princess Grace of Monaco’s funeral, James Stewart, her co-star in Rear Window, described her as ‘ just about the nicest lady I ever met.’

Before her marriage to Prince Ranier III of Monaco in 1956, Grace Kelly was one of the most beautiful and glamorous stars of the Golden Age of Hollywood.

She died in 1982 after suffering a stroke whilst driving and crashing her car down a mountainside. Princess Grace’s funeral was the largest state occasion in Monaco since the royal marriage in 1956. The ceremony was attended by 200 people, including Diana, Princess of Wales, and Cary Grant.

At the time of Princess Grace’s death, there was speculation that her grief-stricken husband would abdicate, but he remained on the throne until his own death in 2005. Prince Ranier III was buried next to his wife in the Cathedral of Our Lady Immaculate. 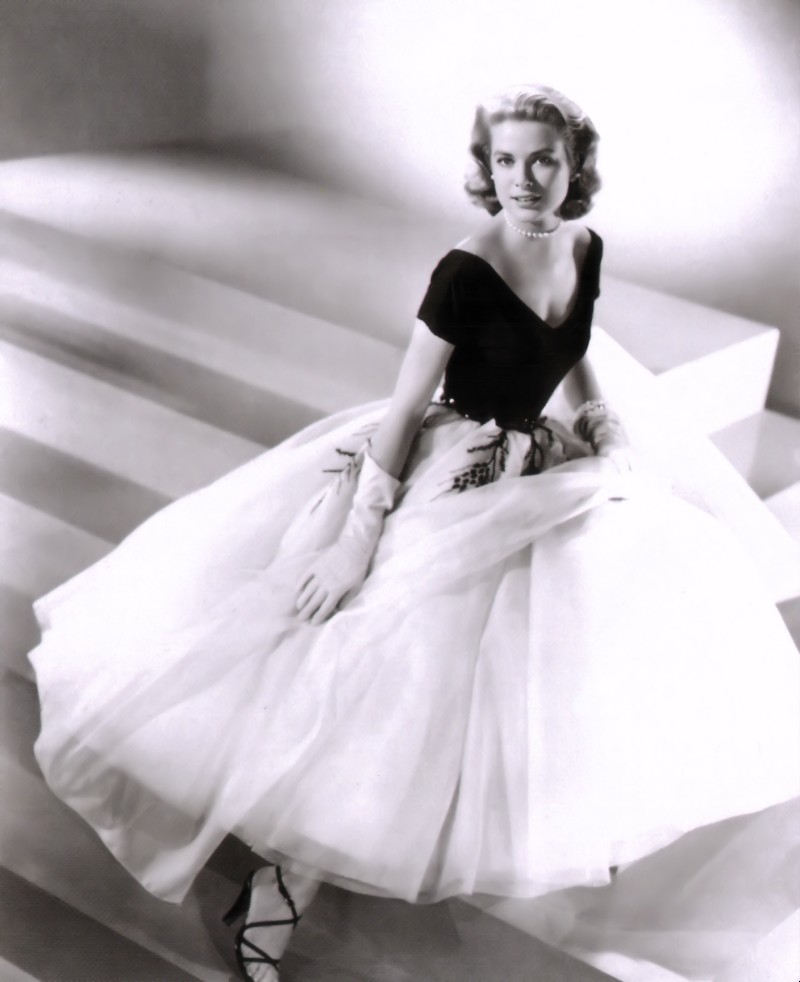 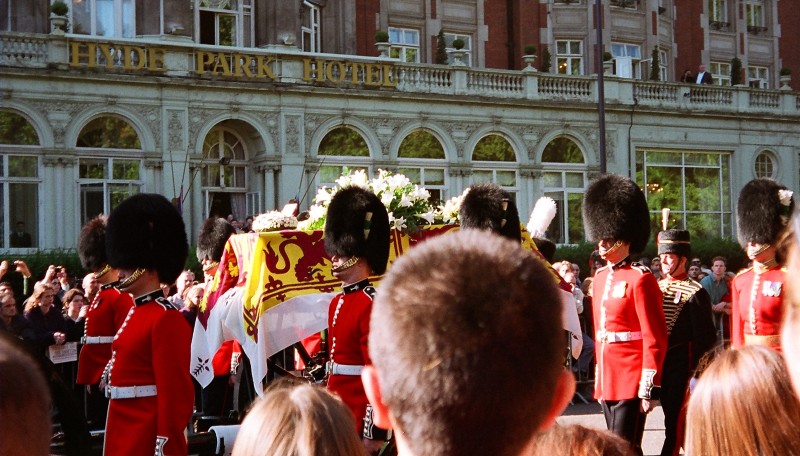 There was so little time to prepare for Princess Diana's funeral, but the arrangements were based on plans for the Queen Mother’s death. A gun carriage carrying her coffin left Buckingham Palace accompanied by the guardsmen who would carry it into Westminster Abbey. As it passed St. James’ Palace the funeral procession was joined by the Prince of Wales, Prince William, Prince Harry and the princess’s brothers. 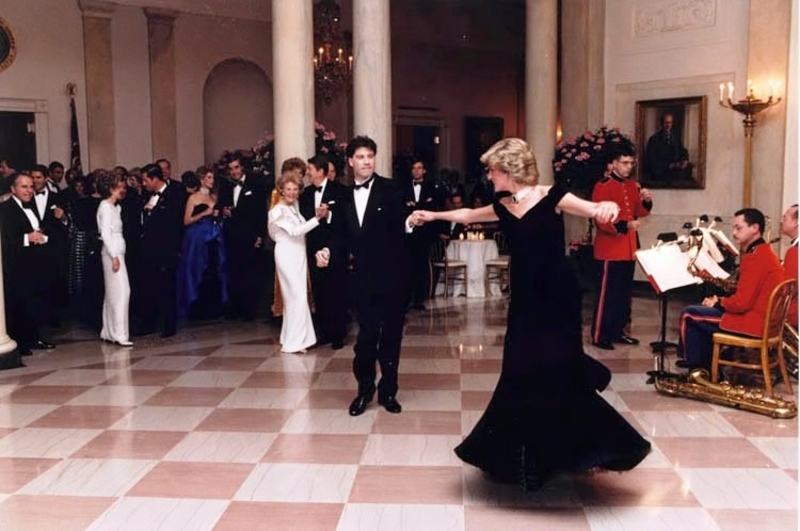 Photo by The White House on Wikimedia Commons 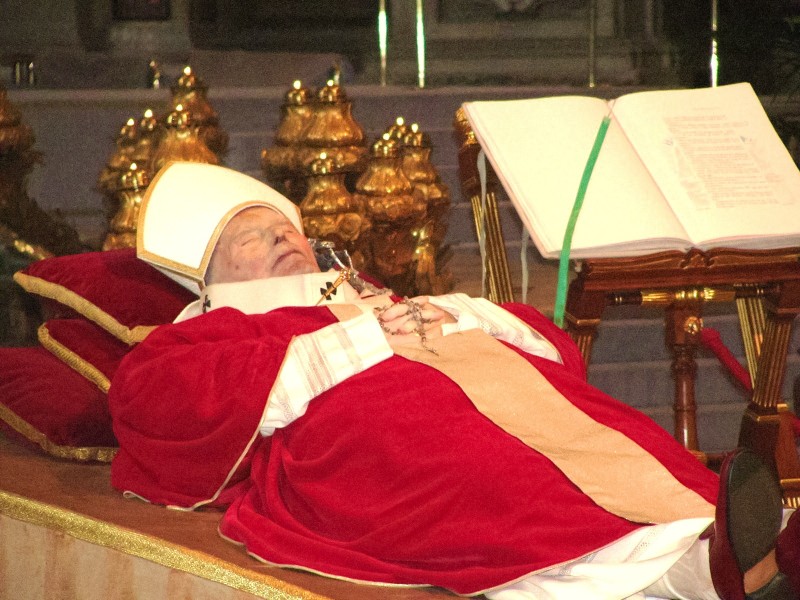 After he died, Pope John Paul II lay in state, protected by the Swiss Guard, in St. Peter’s Basilica and the Clementine Hall before being placed in a cyprus coffin and carried in a procession to St. Peter’s Square by his household staff, the ‘Papal Gentlemen.’ After a ceremony in the square the procession returned to the Basilica for the funeral ceremony.

Millions of pilgrims travelled to Rome for the pope’s funeral. The ceremony was attended by heads of state and dignitaries from around the world, including President George W. Bush and his surviving predecessors, and was watched by around 2 billion people on television. Pope John Paull II was buried in a cemetery underneath the Basilica. 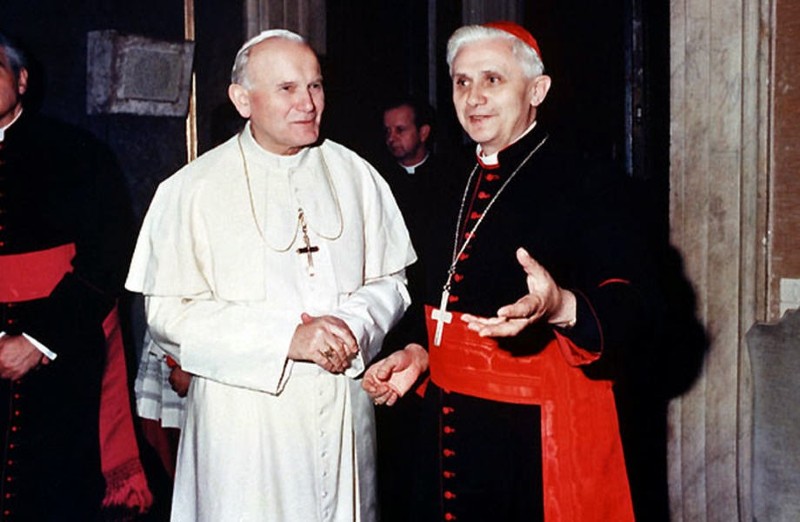 8. The funeral of Nelson Mandela (Johannesburg and Qunu, 2013) 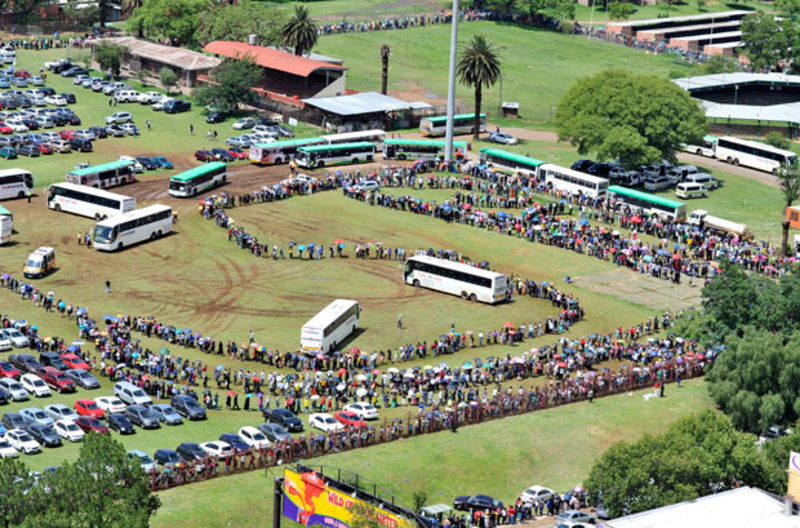 Before the state funeral of Nelson Mandela, the Republic of South Africa declared 10 days of national mourning. Mandela, affectionately known as 'Madiba,' lay in state in Pretoria for three days and his body was viewed by 100,000 mourners.

An official state memorial service in Johannesburg was attended by 100 heads of state and government. The service, in South Africa’s largest football stadium, included a eulogy by President Barack Obama.

A few days later the state funeral of Nelson Mandela was held in a large tent in Qunu on the Eastern Cape, near the village of the former president’s birth, and was attended by 4,500 people. Other commemorations during the period of mourning included a day of prayer and reflection, and an interfaith parade. 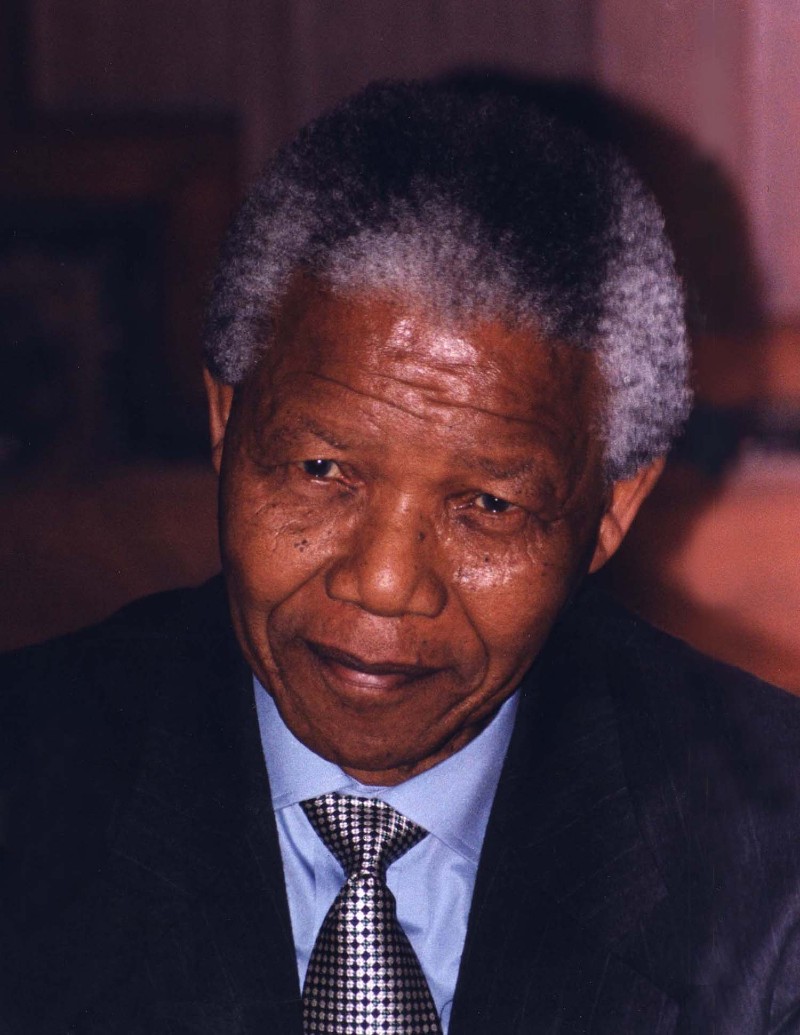