A Guide to Funeral Processions

Funeral Processions: What are the rules of the road and etiquette? 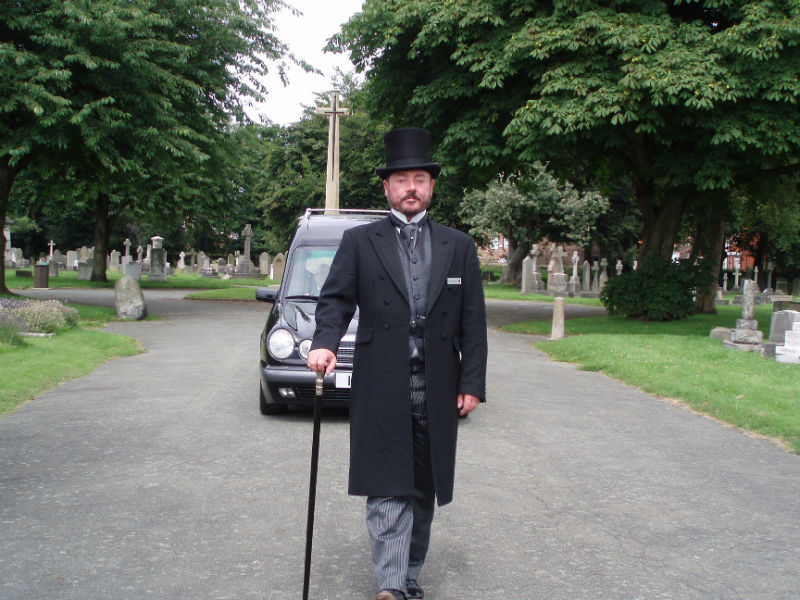 Image by ianhearse from Pixabay

Led by the hearse, a funeral procession is also called a cortege and is usually followed by mourners in funeral cars.

The final journey begins at the funeral home, or from where the person who has died is lying at rest in their coffin. The procession’s first stop is usually to collect the chief mourners from home, who’ll be chauffeur-driven to the funeral venue behind the hearse.

A cortege may involve two stages, if the funeral service or celebration of life is being held in a separate venue to the committal. A committal is the person’s cremation or burial.

You may choose for a modern or vintage hearse, alternative vehicle, or horse-drawn coach to lead a loved one’s funeral procession.

A funeral car for mourners is often offered as part of a funeral package and it’s possible to hire a fleet of as many additional cars for mourners to make up a funeral procession.

Funeral guests can also join the cortege in their own vehicles – bikers, for instance, often make up an honorary convoy as a gesture of respect to a fellow-biker who has died.

The funeral director or their assistants will help direct vehicles that are taking part in the cortege – including if you are following the procession in your own car. You may even be provided with some kind of marker, to help other drivers on the road identify that you’re part of a cortege.

Do you have to give way to a funeral procession?

Although there’s no law that says that you have to give way to a funeral procession on the road, a little etiquette is a matter of good sense.

If you are driving and see a hearse and funeral car up ahead, be aware that there could be a number of mourners following it in their own cars. Keep you distance and don’t rev your engine – impatience won’t speed up a procession travelling at 20mph.

When you’re driving, it’s considerate to give way to a hearse and funeral procession where it is safe to do so and avoid cutting into the line. It’s also good etiquette to turn the volume down, if you have loud music blaring out.

If you are on a dual carriageway or motorway of course, it’s fine to pass a funeral procession that’s travelling more slowly than you.

Where someone was well-known, the funeral director may also lead a procession by foot through the local streets, so that people can turn out to pay their respects.

When a funeral procession is led on foot by a funeral director in this way, it’s traditionally known as paging away. As well as a gesture of respect, this helped people make way for a traditional horse-drawn hearse in days gone by.

A funeral procession may also call in at a place that was special to the person who has died. Motorcycle funeral processions for instance, may involve a ‘last blast’ at speed down a road, or the cortege could include a stop-off at football club, or significant landmark. FA Albin & Sons, which has conducted many traditional funeral processions in London’s Bermondsey, once even stopped off at a betting shop to enable the deceased “one last flutter” – and a betting slip was placed on the coffin.

In some communities or when a famous person dies, people may line the streets to pay their respects and remove or touch their hats – or bow their heads. Some people still make this simple gesture of respect, when any hearse passes by.

The funeral director often leads the procession carrying a cane or ornamental walking stick. The stick, or 'wand 'is a hark-back to a centuries-old tradition, which fell out of practice in the later half of the 19th century. Back then, many funerals were attended by “mutes” – men who were paid to stand sentry at the door of the person who had died and, carrying a wand, silently accompany the cortege to the funeral, looking mournful.

When the hearse and cortege arrive at the funeral venue, crematorium or cemetery, the funeral director and pallbearers gather around the car and respectfully bow to the coffin, before it is shouldered or placed upon the bier – the wheeled stand upon which the coffin is placed.

Inside the venue, the coffin may be lead by the funeral celebrant or minister, with the chief mourners and family following behind the coffin.

The funeral procession is generally accompanied by music – which may be recorded or played live by a musician – as other funeral guests quietly look on. These 10 pieces of classical music are among the most popular for a funeral procession, but many people opt for a favourite modern ballad or popular funeral song.

Funeral procession music is a completely personal choice, but the entrance music may be more sombre than the music, song or hymn chosen to accompany the procession of mourners as they leave the venue. Some people choose for an uplifting piece at the end of the funeral, as a celebration of someone’s life or as a mark of their religious faith.