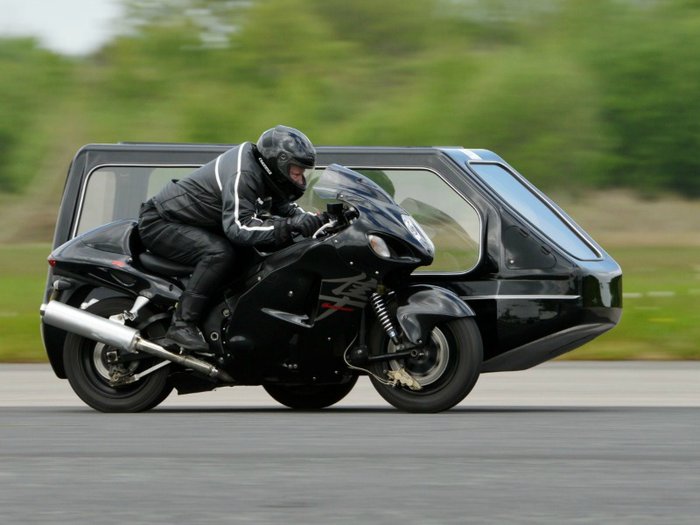 More and more people are seeking an alternative means of funeral transport to the traditional hearse, according to the specialists offering something different.

Former digger driver Paul Nowicki made national news headlines, when the 90-year old from Bristol was taken to his funeral in the excavator bucket of a JCB.

His family was among the increasing number of families choosing to personalise their send-off, or fulfil requests for a last hurrah that celebrates a life well-lived. From a last blast on a motorbike, to bowing out your own way in a New York cab, here we look at five unusual ways to make the final journey. 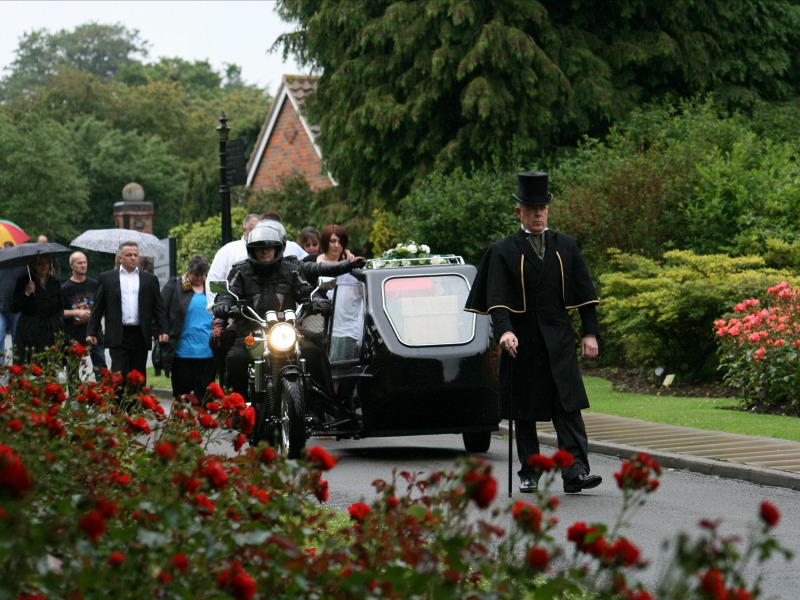 "No one places an Everton fan in a Liverpool strip when they die so why should a motorcycle enthusiast be last seen in an automobile?" asks the Reverend Paul Sinclair – who had the ready answer.

Indeed, since he established his Motorcycle Funerals company in 2002, the friends and families of thousands of people with a similar outlook have been conveyed to their funeral in his custom sidecar hearse. Paul’s even obliged family member requests to ride pillion on his alternative hearse.

The Pentecostal minister-turned award-winning motorbike hearse specialist firmly believes that funerals should reflect who we were - and what we loved. And if that means incorporating a lap of honour around an airfield at top speed, or a hair-raising ‘Last Blast’ on the bypass en-route to the funeral, then the family’s wish is his command. Paul even holds the World Record for the fastest speed achieved on a motorcycle hearse.

Based in Leicestershire, he and his team run a fleet of nine motorbike hearses, including a Triumph Thunderbird (their most popular ride) and Harley Davidson, covering the entire British Isles – as far as the Hebrides. 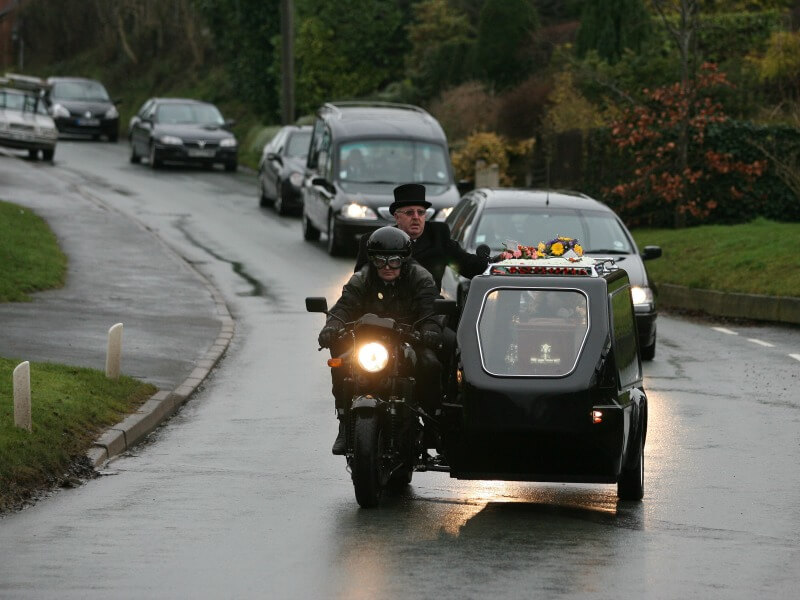 Whatever the weather and wherever you are, don't worry - we'll get there, is their promise.

“We went through all the floods and storms the last few years and amazingly we never missed a single funeral,” says Paul. “On one occasion the flooding was so bad the water went over the spark plugs, but somehow we did it. The funeral started on all cylinders and ended on one. Afterwards we had to scrap the bike, but nonetheless, we completed the funeral.”

“Perfect” is how many have described their loved one’s final journeys with Paul – and not all of them were bikers. Many of his clients find him in their search for a send-off that’s as special as their loved one, including one grand old lady who died at the age of 102. 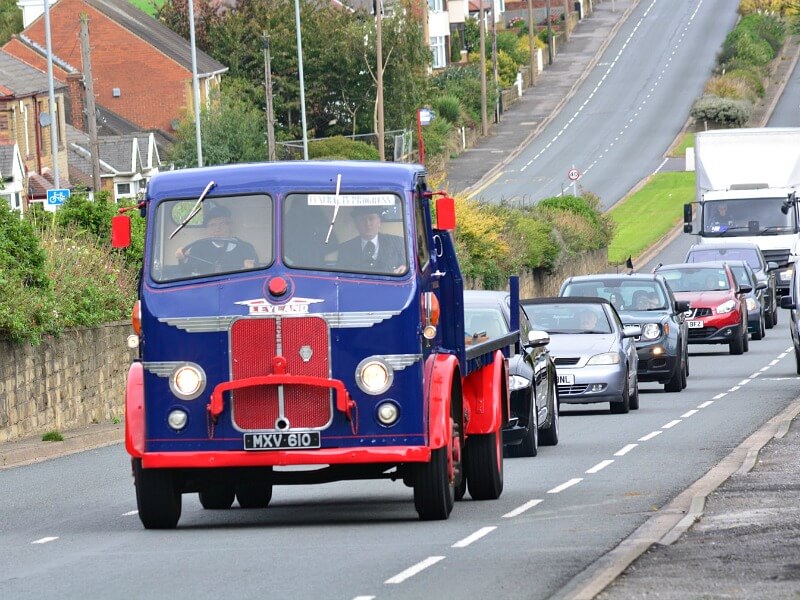 Many of us want to celebrate the life of a loved one we have lost and David Hall’s distinctive vintage lorry hearse, provides just the platform.

“Some families want to utilise the space on the deck and treat it like a stage, asking for a theme to be created depicting their loved one’s occupation or interests,” he says.

Based in Bradford on Avon in Wiltshire, David’s blue and red 1950 Leyland Beaver is in demand the length and breadth of the country, bearing loved ones to their funerals in style.

There’s no lengths that David won’t go to create that personal touch: themes staged aboard his vintage lorry hearse have included a mobile disco set to commemorate a former DJ, a bedstead – complete with bedside table and light, football fans’ team colours and a gardener’s coffin conveyed atop a sward of Astroturf, complete with a lawnmower standing sentry. 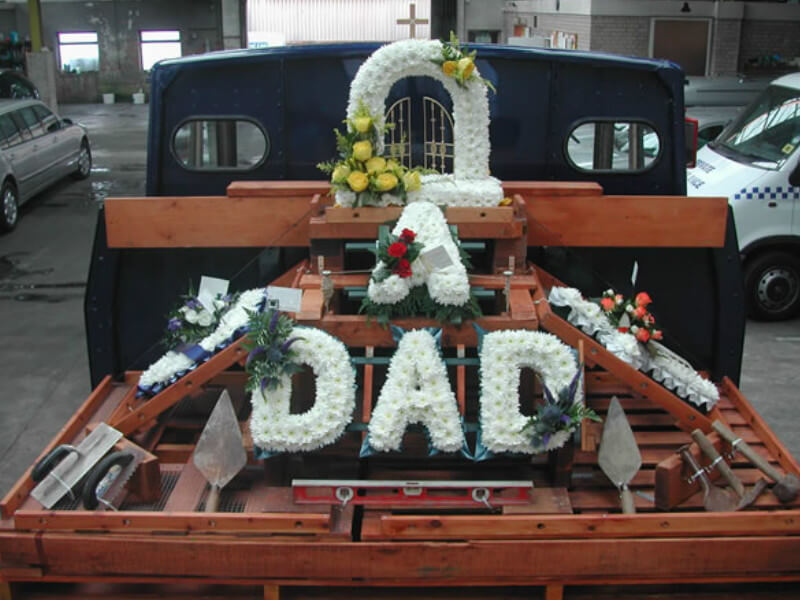 “Tradesmen such as builders or plumbers can have their work tools, positioned between the floral tributes,” says David, who is also happy to oblige, with the help of local florists, when families opt to garland the alternative hearse's deck with festoons of flowers.

Those who have vision for fulfilling a loved one’s wish, should never be afraid to ask, says David, who adds: “It never ceases to amaze me what can be possible with the help from my team.”

His lorry hearse is also a popular choice for friends and family commemorating loved ones who worked within the haulage industry, or had a passion for classic cars. . “Vintage Lorry Funerals offers a highly dignified final journey for your loved one,” says David, “but at the same time brings some colour to a dark day.” 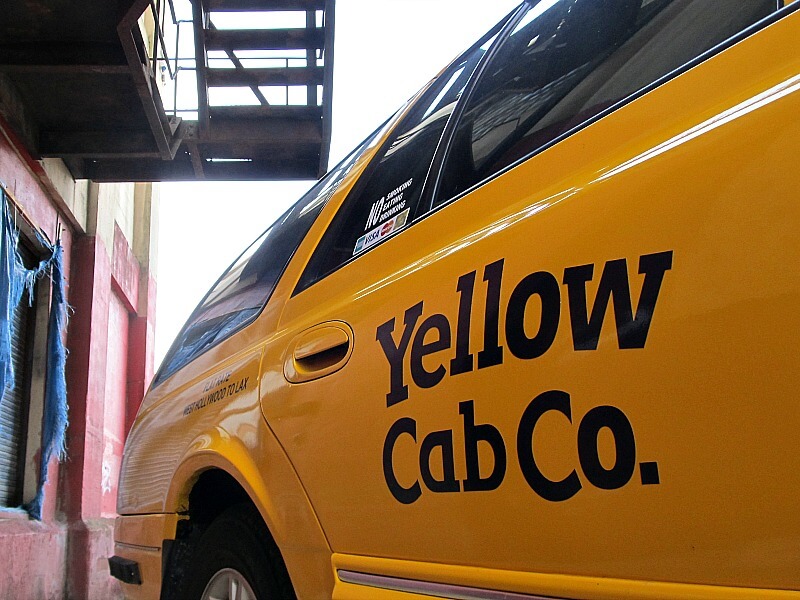 Attending an American-car aficionado’s funeral a few years ago, Rory Coxhill saw that something was missing.

The show-stopping cavalcade of all-American classics looked amazing, but the most important vehicle seemed rather at odds with it all.

“The funeral was very personalised, but missing a suitable hearse,” explains Rory, who was inspired by the day to establish his Final Fare Taxi Hearse company. “They had to use the funeral director’s Jaguar-based hearse, which was so far removed from the colourful rumbling V8's and straight sixes, it looked out of place.

“So the idea was born from that - I would build a hearse which was very American in style - and very different. We came up with the idea of a Yellow Cab as it’s very recognisable as an American icon and stands out from the crowd.” 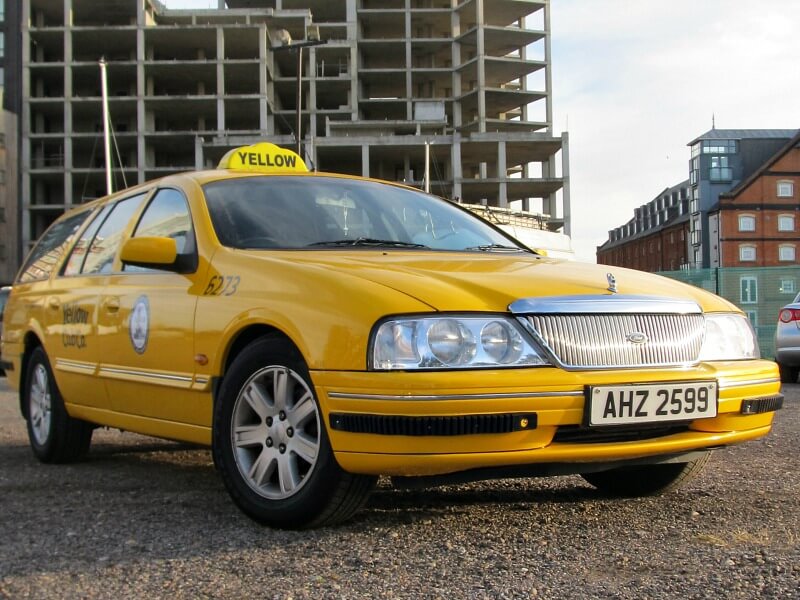 Rory, who is based in Sudbury, Suffolk, tracked down an old Ford Fairmont station wagon and set to work converting it into an iconic-style funeral car. The result- The Hearse Taxi Cab- can be customised according to preference, to become a Los Angeles Yellow Cab, or New York style taxi with the option of personalising the illuminated advert on the roof.

Even this unnusual hearse’s interior has been fitted out to look the part, with a deck made out of marble-effect formica and elsewhere, a grey vinyl finish to match the rest of the Ford’s upholstery, keeping it light and bright.

Available for hire all over the UK, the Yellow Cab hearse could be set to add more miles to its meter, after putting in an appearance at a car show in France and creating a buzz. 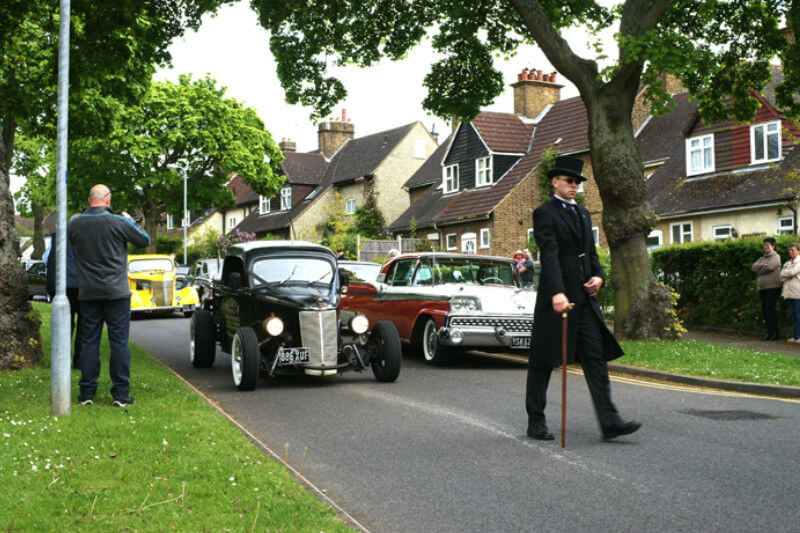 When Grant Pinney and David Hicks’ friend Martin died in 2010, they fulfilled his last wish and took him on a ‘final cruise’ on the back of David’s Fordson hot rod pick-up truck.

His coffin was followed by a cortege of vintage pre-war vehicles, souped with big wheels and powerful engines by their drivers- all fellow members of the A602 hot rods club.

What began as the fulfilment of a promise to a much-missed friend, soon turned into an alternative mode of funeral transport (complete with PA deck) offered by Grant, who was already a funeral director.

“We’ll do a last blast, but our thing really is the cruise,” he says.

“People will meet up with us, rather than at a crematorium or church and we’ll drive in a line for up to an hour. Then, we’ll head over to a quiet place and hold a service. It’s very bespoke and I can even hold the service myself, if it’s more of a petrol-head thing.” 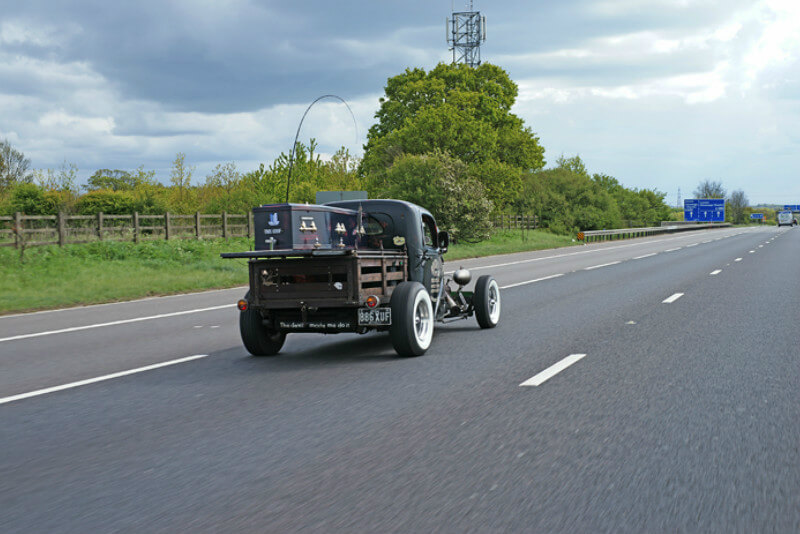 Grant and David are currently working to convert a Hudson van - dating back to the 1930s – into a second hot rod hearse, which will have an elongated chassis and an enclosed deck upon which to lay the coffin. They anticipate getting it on the road in March 2017.

Based in Hertfordshire, their alternative funeral transport is available country-wide. “There’s been a huge increase in people wanting an alternative funeral,” adds Grant, who also custom-finishes coffins by request, in his hot rod workshop.

“Some people want more than a car that’s just going to crawl down the road.” 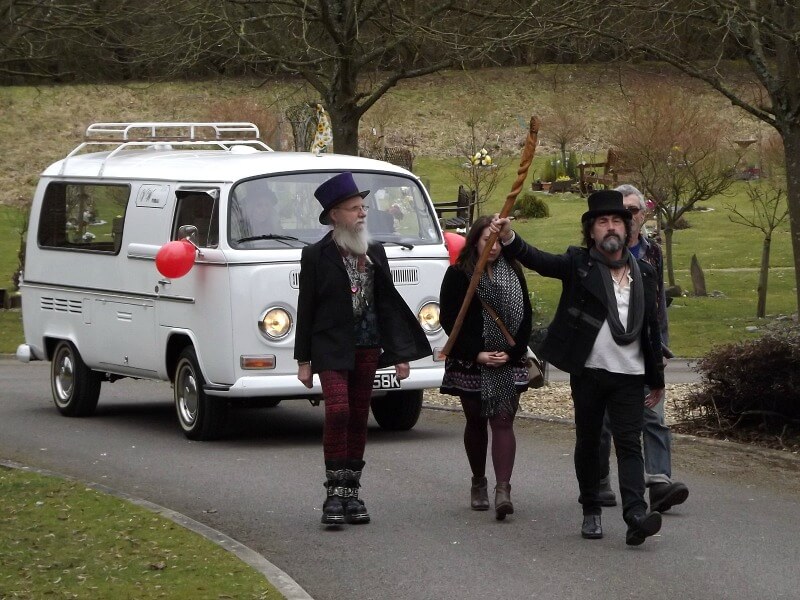 “Our funerals are nearly always a celebration of life,” says Clare Brookes. “These days, there are many ways that a funeral can be personalised to reflect a person’s passions and interests.”

Clare and business partner Michelle Orton’s classic VW camper van hearses are a particularly popular choice amongst families who’ve lost a younger loved one and choose to bedeck the interior with colourful tributes and tokens.

Her award-winning nationwide service, based in Nuneaton, Warwickshire, comprises a fleet of three VWs. There are two hearses: a 1972 Bay window model - affectionately called Hearsbie - and a 1967 split screen (kitted out with sound system to play your loved one’s favourite tunes) and also Winnie, an 11-seat passenger bus. 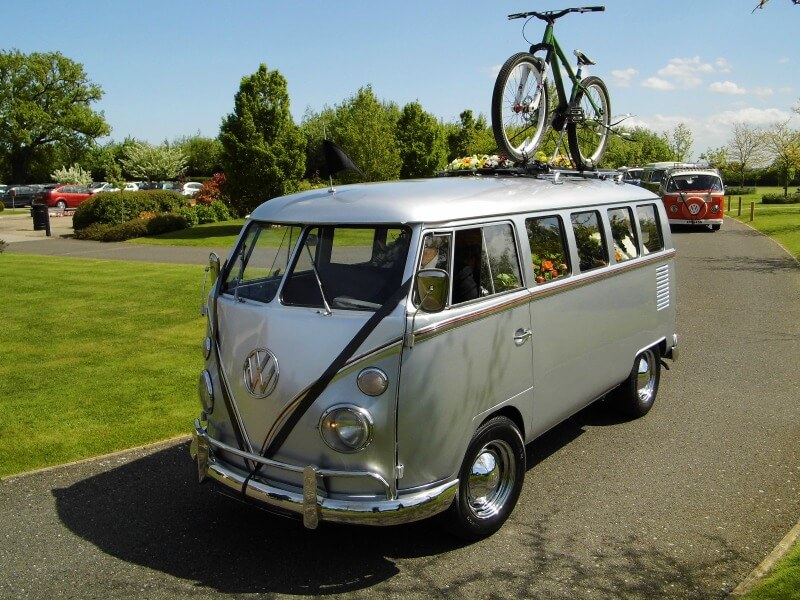 Depending on how involved their families want them to be, young siblings or relatives will sometimes help to decorate the VW hearse, while pets have also played their part: “I’ve often taken the family pet along to the funeral or had them mooch around the back of the hearse so they can be with their owner for the last time,” Clare says. “That’s always very moving.”

While Clare’s alternative funeral transport can be booked through other funeral directors, she is also a professional herself and has earned a reputation for her warm and caring approach. Her unnusual hearses appeal to many people with different outlooks on life from wizards and Wiccans, through to elderly people who had a real zest for life – including an aviation pioneer who travelled the world.

“You have to deliver them as carefully as a precious Fabergé egg,” she says. “It’s quite a responsibility – but what elation.”