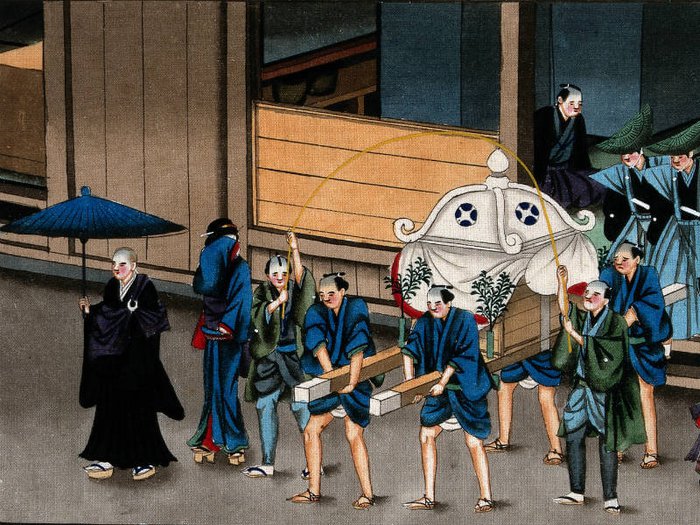 A Japanese funeral procession leaves the home of a dead man for the temple; a Buddhist monk carrying a parasol leads the procession. Photo by Wellcome Images.

Since the very beginning of human civilization, in almost every culture and society that has existed, human beings have had rituals to deal with death. From dressing the body to burying grave goods, these funeral rituals are hugely varied across history and cultures.

Dr Alan D Wolfelt describes a ritual as a “symbolic activity that helps us, together with our families and friends, express our deepest thoughts and feelings about life’s most important events.” Funerals certainly fit these criteria and even modern funerals have a heavy element of ritual: the bringing of the coffin into the church or crematorium, standing and sitting at the same time, the giving of flowers, the convoy of hearses leading the way. Funerals remain one of the most ritualised occasions in our lives, even in an era when we might consider communal rituals to be redundant.

Since the 20th Century, more and more academics and scholars have turned their attention to death and human behaviour around death. Many of these scholars agree that the funeral ritual holds a deep meaning for us and can even help us to grieve and move towards healing. As William G. Hoy says: “Some of the bereavement world’s brightest minds have affirmed the role of ritual in managing grief.”

Funerals and the beginning of the human race

More and more scientific evidence is showing that mourning and funeral rituals have been around for as long as humans have existed – perhaps even longer.

Plenty of animals display certain behaviours around their dead. Elephants have been observed ‘viewing’ their dead and placing dirt and branches over them. Dolphins have been known to protect the bodies of dead members of their pod, while ants, bees and termites all have dedicated members of their societies to dispose of the dead.

It appears that humans too have an in-built desire to mark death with certain rituals. Some archaeologists argue that Neanderthal grave sites show evidence that these people, related to homo sapiens (humans), purposefully buried their dead and performed basic burial rites.

Graves from early humans show the same. Sites dating from between 50,000 and 100,000 years ago show that the dead were buried with grave goods, suggesting some kind of burial practice and belief about what happened after death. From our earliest beginnings, we have always performed funerals and other death rituals - but for what purpose?

Spiritual needs and the funeral

From these humble beginnings, human civilisation developed to incorporate a huge variety of different rituals, practices and beliefs around death and dying. What many of them have in common, however, is the idea of preparing the spirit for the afterlife. It could be argued that this is an integral part of learning to cope with grief; believing that you have cared for the spiritual needs of yourself and your loved one.

The Ancient Egyptians are famously known for their complex funeral rites, including the mummification of the body and ceremonies performed by priests. The Egyptians believed that eventually the spirit would return to its body, and so it needed to be preserved as well as possible so that the spirit would recognise it. Egyptian burials also often included grave goods – valuable artifacts and other belongings entombed with the body for use in the afterlife.

This particular practice can be seen across many cultures worldwide, from Vikings and Celts to Ancient China, in order to provide the spirit with everything they would need in the next world. The most famous example might be the tomb of Chinese Emperor Quin Shi Huangti, which had a terracotta army of over 6,000 life-sized soldiers in preparation for the afterlife. 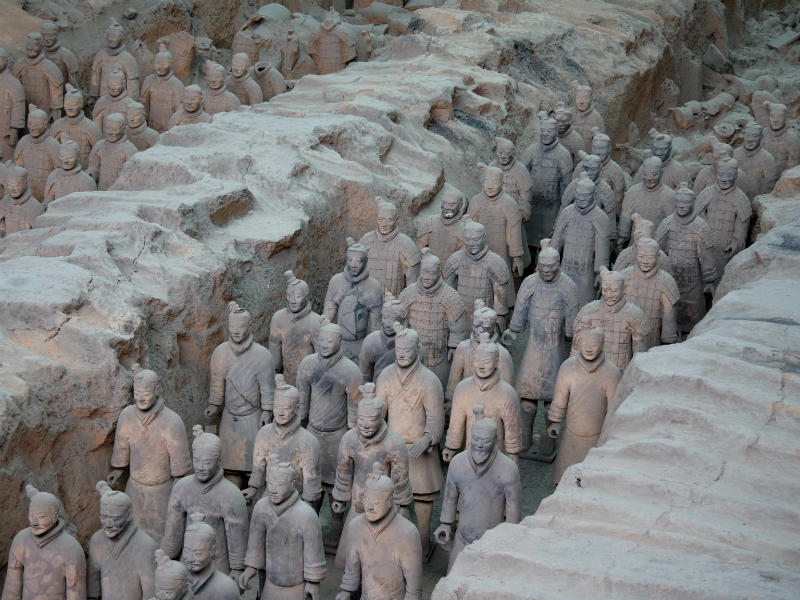 Emperor Huangti’s terracotta army, part of the elaborate rituals to prepare his soul for the afterlife. Photo by Maros Mraz

Mayans were often buried with maize in their mouth, as food for the soul’s journey into the afterlife. Mayan bodies were also aligned with where paradise was thought to be, and sprinkled with the red mineral cinnabar as part of the funeral rites. All this was to safely guide the soul through the treacherous underworld.

Scholars generally agree that religious and spiritual beliefs play a large part in funeral practices, from early history to the modern day. We may think we have moved on from these kind of practices, but elaborate spiritual rituals are still performed all over the world.

Christian funerals, still chosen for a large proportion of British funerals, involve preparing, or “entrusting”, the person to God and praying for them to find peace in the afterlife. Even non-religious funerals are influenced by ideas of caring for and preparing the person who has died for whatever lies beyond this life.

Rituals to help us grieve

However, spirituality and religion can’t be the only reason we perform funerals. We live in an increasingly secular society, where 53 per cent of the British population say they are not religious, according to data from WIN/Gallup market research. And yet the number of funerals being held has seen no decline. So what keeps us performing rituals?

Michael I. Norton and Francesca Gino, writing for the Journal of Experimental Psychology, note that: “Ritualistic behaviour manifests not just in religious practice, however, but is present across domains of human life, providing order and stability while marking change – especially in times of chaos and disorder.”

Academic Jonathan Jong agrees: “Despite this wide diversity of practice, it seems our death rituals serve the same psychological functions: to make us feel less helpless in the face of our sorrow and terror.”

Scientific research is beginning to show that rituals, even small, unexplained rituals, actually reduce anxiety levels in those who perform them during difficult times. One group of scientists from the University of Connecticut, USA and Masaryk University, Czech Republic, undertook research that showed that “ritualisation might be an anxiety-reducing coping strategy.”

Norton and Gino performed a pilot study involving subjects who had lost someone through bereavement. It was found that these people had a wide range of different ritual behaviour for coping with the loss, ranging from playing certain songs at certain times to visiting a specific place.

It was found that underneath all of these behaviours lay the same “psychological mechanism” – that “engaging in rituals mitigates grief by restoring the feelings of control.” In other words, having a set routine, set rituals to perform, helps people feel better by giving them a sense of security and control.

Many psychologists, medical practitioners, sociologists and anthropologists agree with these findings; they believe that evidence shows that “funerals are of the best and potentially most therapeutic rituals available” during grief (Catherine Sanders).

Indeed, Louis Gamino, a researcher at the University of North Texas found that bereaved families who held a ‘good’ funeral (where everything went smoothly and there were no problems or family conflicts) showed significantly less intense symptoms of unresolved grief later into their bereavement. 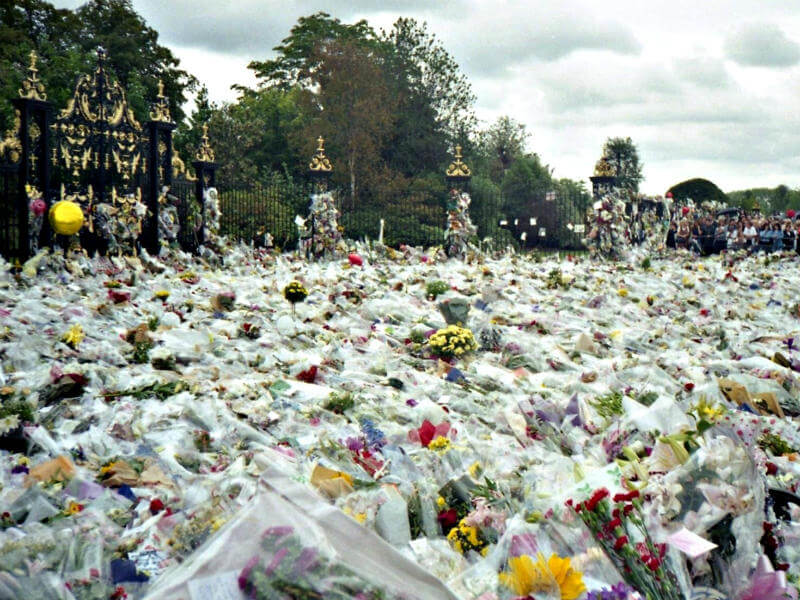 Even though we may not think of it as a ritual, we still engage in ritualistic behaviours after a death. Here mourners leave thousands of floral tributes for Princess Diana of Wales. Photo by Maxwell Hamilton.

There are several factors at play that make funeral rituals an important part of the grieving process. Paul E Irion, expert in funeral practices, identified these as “anthropological, social-psychological, psychological, and theological dimensions.” In other words, the therapeutic value of funeral rituals are rooted in our species, our minds, our society and our religious beliefs.

These elements come together to provide a meaningful ritual that allows us to confront our loss and channel our grief. Some people may not find funerals to be as helpful as others, but it certainly seems that human society as a whole has always – and probably will always – feel a need to ritualise the death of a loved one.

With small symbolic acts like laying flowers on a grave or burying our loved one with their wedding ring still on, we are finding ways to find meaning in a difficult and confusing time. It’s a deep-rooted need within human society. Embracing the ritual of a funeral could be an important way of saying goodbye to the person you love and begin the long process of rebuilding your life.

William G. Hoy, ‘Do funerals matter? The purposes and practices of death rituals in global perspective’, 2013

Paul Giblin and Andrea Hug, ‘The Psychology of Funeral Rituals’, 2006

Jonathan Jong, ‘From mummification to “sky burials”: why we need death rituals’, 2016