Death around the world: Funerals and fantasy coffins in Ghana 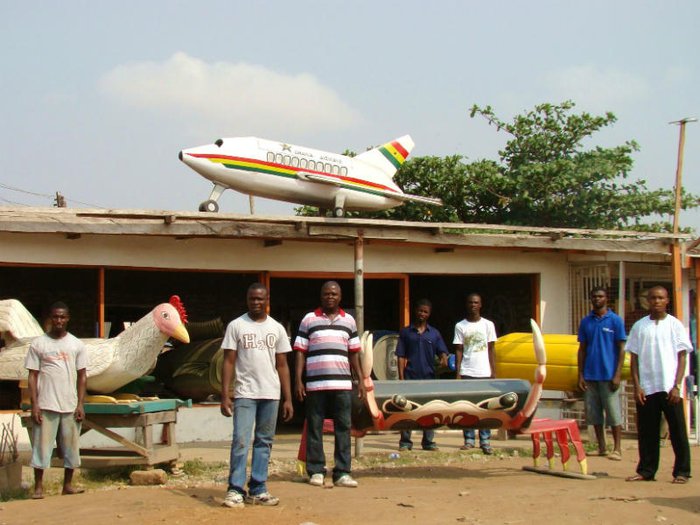 The Kane Kwei Workshop in Accra, with a selection of fantasy coffins. Photo by Jean-Michel Rousset via Wikimedia.

In the UK, people are starting to get used to the idea that funerals can be a celebration of life. But in Ghana, nothing but the liveliest, most colourful celebration will do. From dancing pallbearers to fantasy shaped coffins, many Ghanaians believe that the best way to honour a loved one is to throw a party.

This West African country is a diverse and multi-ethnic nation. While the majority of its citizens are Christian, it’s also home to many Muslims. Within this mix of religious and cultural traditions, the funeral ceremony has emerged as a hugely important community event.

Indeed, hundreds or even thousands of people may attend one funeral, coming from far and wide to participate. Bereaved families will advertise funeral arrangements on large billboards in prominent public places, costing up to 13,000 Ghanian Cedi, or around £2,400.

Ghanaian funerals can cost an enormous amount; anywhere up to £16,000 and beyond. The extraordinary amount spent on funerals has been a cause for concern in recent years, with government officials and religious leaders imploring Ghanaians to invest their money in the living, rather than the dead. The extravagant funeral rituals, however, continue to be popular. 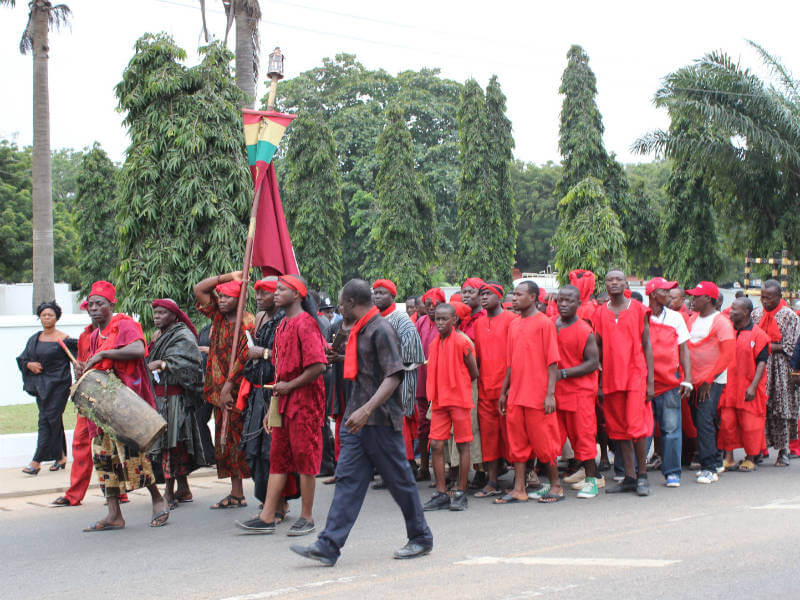 Ghanians in traditional funeral attire mark the death of President John Atta Mills in 2012. Photo by Ghana Decides via Flickr.

Funeral services in Ghana usually take place on Saturdays. The time between the death and the funeral can vary widely, depending on how far away mourners will have to travel to be present. This can mean that several months can pass before the funeral takes place.

Mourners will arrive dressed in black, or black and red. These are the traditional funeral colours used in Ghana. Often mourners will wear mostly black, while close family members of the person who has died will wear more red.

When mourners arrive, they are expected to express their condolences to the head of the bereaved family and shake hands. Then, they shake hands and convey their sympathies to other family members, according to precedence. Once this is completed, mourners will usually make a donation towards the funeral costs. Sometimes an announcer will read a list of all the donations made.

There will be food, drink, music, singing and dancing, often with traditional drum groups and dancers. Mourners will expect to be entertained and in modern times it is not unusual for a DJ to be hired for the occasion, providing loud music for mourners to dance to.

The party atmosphere extends to the funeral ritual itself. One lively tradition in Ghana is dancing pallbearers. These highly-skilled and strong dancers will carry the casket on their shoulders and dance in sync, often led by a lead dancer. It’s a great spectacle and an undeniably joyous way to pay tribute to a loved one. 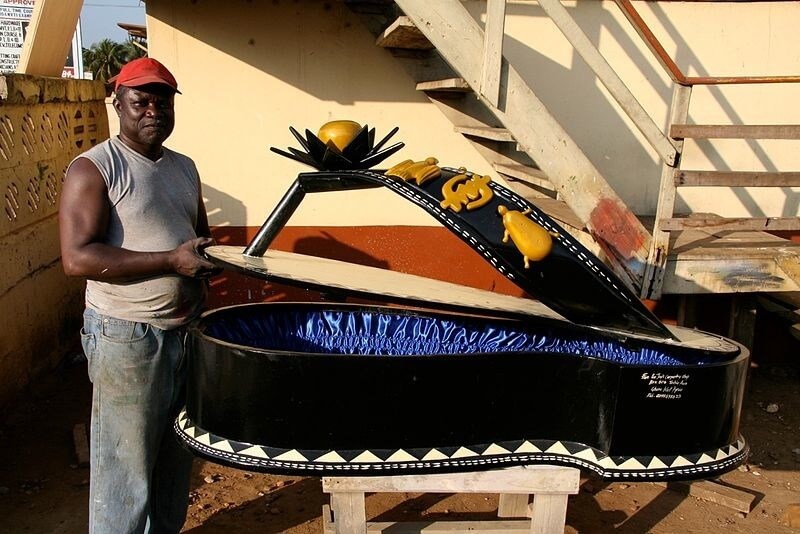 Famous coffin artist Paa Joe with one of his designs. Photo by Regula Tschumi via Wikimedia.

In recent years, people in the UK have started to become aware of an enchanting Ghanaian funeral tradition: the fantasy coffin. These beautiful works of art are fully-functioning caskets, made to look like all manner of animals and objects, from lions and chickens, to designer shoes and cars.

The practice is thought to date back to the traditional burial rites of the Ga people, an ethnic group in Ghana and Togo. Traditionally, palanquins, a type of platform carried by mourners, were used to transport dead chiefs to their burial. Often these palanquins would be built in figurative shapes, such as animals and birds. 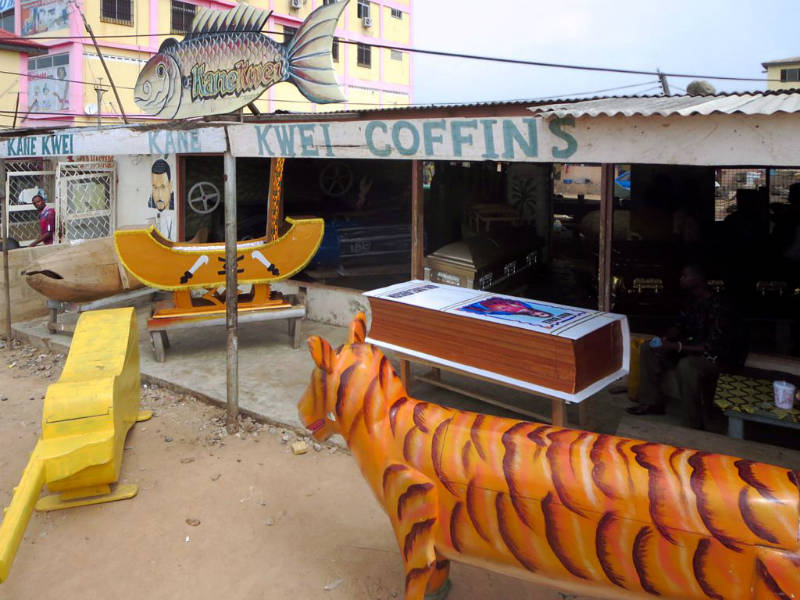 The Kane Kwei Workshop in Accra. Photo by David Stanley via Flickr.

The modern fantasy coffin, as they are known, was pioneered by craftsmen such as Paa Joe, Ataa Oko and Seth Kane Kwei in the 1960s, whose workshops remain open and active today.

The bereaved can choose many different shapes and design for their loved one’s fantasy coffin. Often these reflect the person’s profession or hobbies, or may simply be in the shape of something that they admired or valued. The possibilities are almost limitless and these creative coffins have captured the imagination of many Brits. 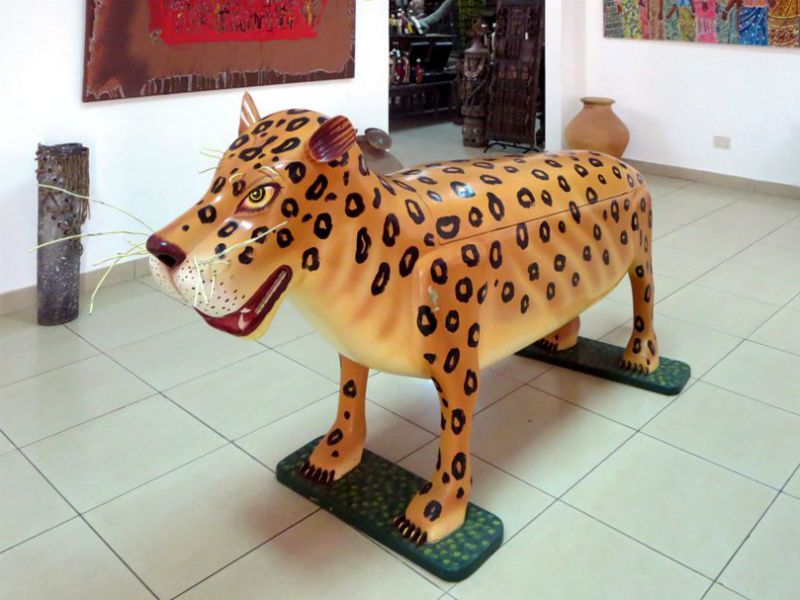 A handmade Ghanaian fantasy coffin in the shape of a leopard. Photo by David Stanley via Flickr.

In fact, companies are now emerging in the UK offering custom coffins in almost any design imaginable. Nottingham-based Crazy Coffins counts a Rolls Royce, a ballet shoe and even the Starship Enterprise among its incredible creations. Perhaps Brits are looking to embrace the party atmosphere and creativity of the Ghanaian funeral.