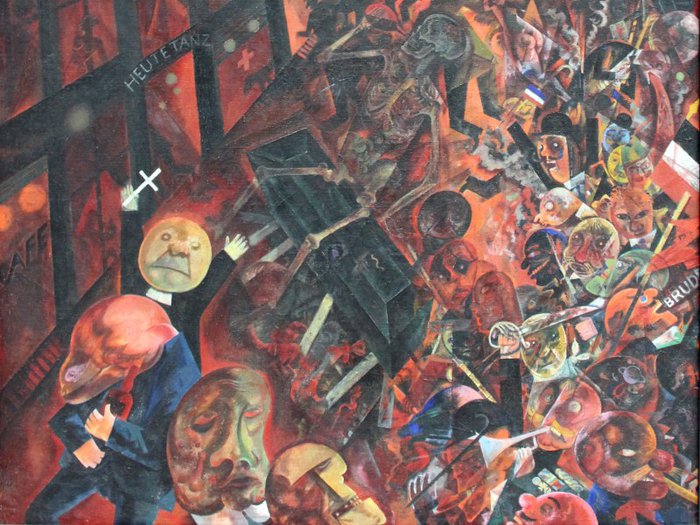 This guide highlights some of the most famous and important funeral paintings in western art.

Funeral paintings might seem like an unusual topic, but death has always attracted artists from Neoclassicalism and Romanticism, to German Expressionism, who have approached it from lots of different perspectives.

Funeral Procession of Elizabeth I

This early 17th century illustration is the first piece of funeral art featuring an English ruler. The funeral procession for Elizabeth I is lead by a riderless horse covered with velvet drapes and followed by a horse-drawn carriage bearing the queen’s purple coffin, which is carved with a lifelike effigy of her. The canopy above the coffin is carried by six knights. The coffin is followed by the queen’s most senior servants, including her ladies in waiting and the Privy Council. Notable individuals in the procession include Sir Robert Cecil, Queen Elizabeth’s Principal Secretary and Sir Francis Drake, Captain of the Guard.

The Funeral of Patroclus

The art of the 18th century was dominated by the contrasting styles of Rococo and Neoclassicism. The latter was the most popular with the artistic establishment and reflected an obsession with Ancient Greece and Rome as the peak of human civilisation. Even contemporary figures were depicted in classical clothes. Several famous paintings can be classified as funeral art. The Funeral of Patroclus depicts a scene from the Illiad where Achilles mourns the death of his friend Patroclus at the hands of Hector during the Trojan War. The painting disappeared shortly after Jacques-Louis David completed it and was only rediscovered in 1972.

A Burial at Ornans

The composition of A Burial at Ornans seems quite traditional now, but it caused outrage when it was exhibited in 1850. Many critics were scandalised that Gustav Courbet had depicted ordinary people at a mundane occasion on the same scale as the grandiose events which were the traditional focus of fine art. Even the title ‘A burial…,’ rather than ‘The burial’ was provocative because it underlined Courbet’s emphasis on realism.

The burial that inspired Courbet was the funeral of his great-uncle in his home-town, and the ordinary people depicted in the painting were mourners who had actually attended it. A Burial at Ornans was eventually accepted as one of the great paintings of 19th century France and an important milestone in the emerging school of Realism. 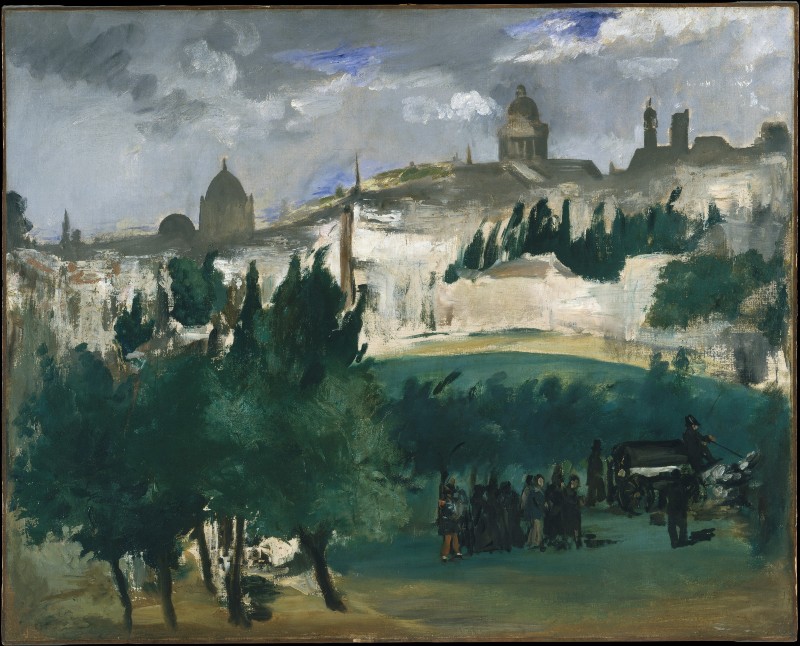 Eduoard Manet, an early impressionist and pioneer of Modern Art, was one of the few mourners to attend the funeral of the celebrated French writer Charles Baudelaire, because of a potential storm. Manet kept it in his possession until his own death, and it is not known why he stopped working on it. Perhaps grief at losing his friend made finishing this funeral painting too emotionally painful. 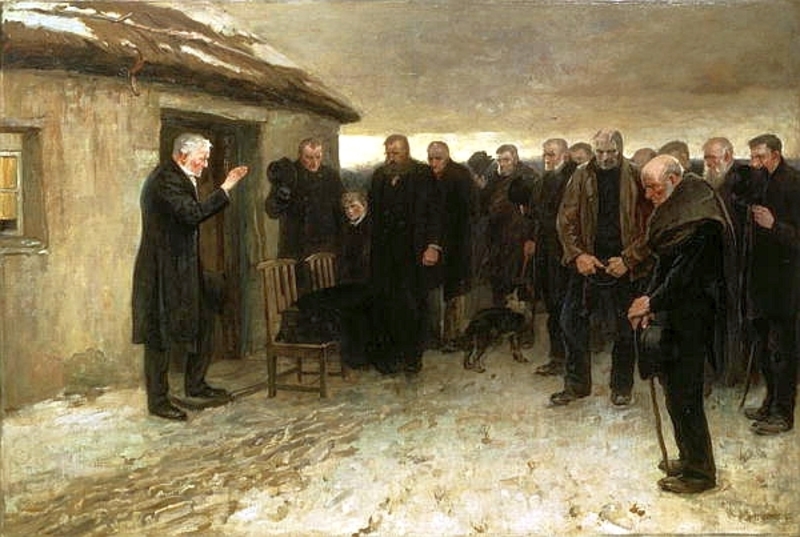 A successful portrait painter, whose commissions included several Prime Ministers, Sir James Guthrie, one of the most famous painters in Scottish art, found most of his inspiration in rural Scotland. A Funeral Service in the Highlands is a realistic portrayal of a 19th century Scottish funeral, including the absence of woman, but the composition recalls the influential, and much more dramatic, A Burial at Ornans.

The Funeral of a Viking 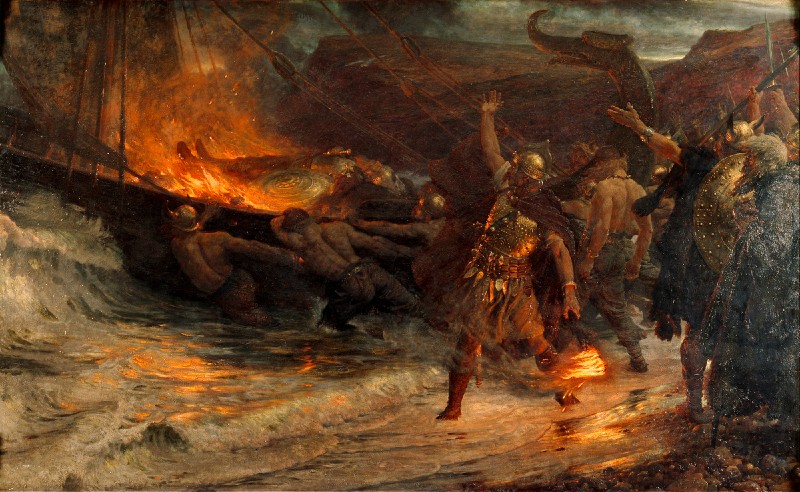 This entirely fictionalised depiction of a Viking funeral reflects the culture of Romantic Nationalism which gripped the European imagination in the 19th century. The Victorians retained the 18th century interest in Classicism, but were also fascinated by the ‘Old North,’ including Vikings, Scandinavian raiders who invaded parts of Britain, Ireland and France in the Middle Ages.

Other elements of the painting that are more in tune with 19th century ideals of the past than reality, are the uniforms of the ‘Viking,’ which seem more like the armour of Roman soldiers.

A funeral as the subject was likely chosen because of the artistic interest in death and the inherent drama of a Viking ‘burial.’

The Funeral of Shelley 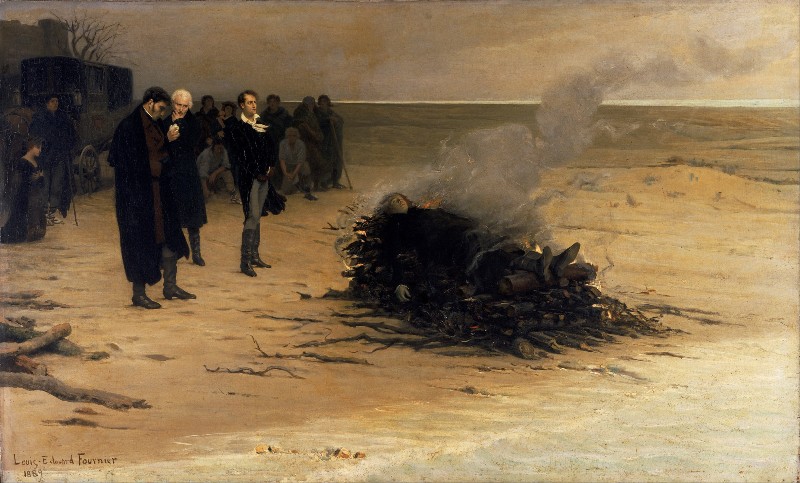 When the Romantic poet, Percy Bysshe Shelley, husband of Mary Shelley, drowned after his ship sank off the coast of Italy in 1822, his friends Lord Byron, Leigh Hunt, and Edward J. Trelawney, burned his body on the beach after it washed ashore. Italian law required that all bodies recovered from the sea were burned, but the dramatic use of a funeral pyre suggests that Shelley’s friends were also inspired by the neoclassical ideal to copy the funeral traditions of Ancient Rome.

Trelawney apparently retrieved the young poet’s heart and part of his jawbone from the fire because it was too pure to burn. Shelley was buried in the same cemetery in Rome as John Keats, another Romantic poet and friend who had predeceased him. Mary Shelley kept her husband’s heart in her writing desk.

This painting by the French artist, Louis Edouard Fournier, is, fittingly, a Romanticised version of Shelley’s funeral that fictitiously features Mary Shelley and ignores reports that the poet’s body was quite badly decomposed by the time it appeared on the beach.

A Funeral: Tribute to Oskar Panizza 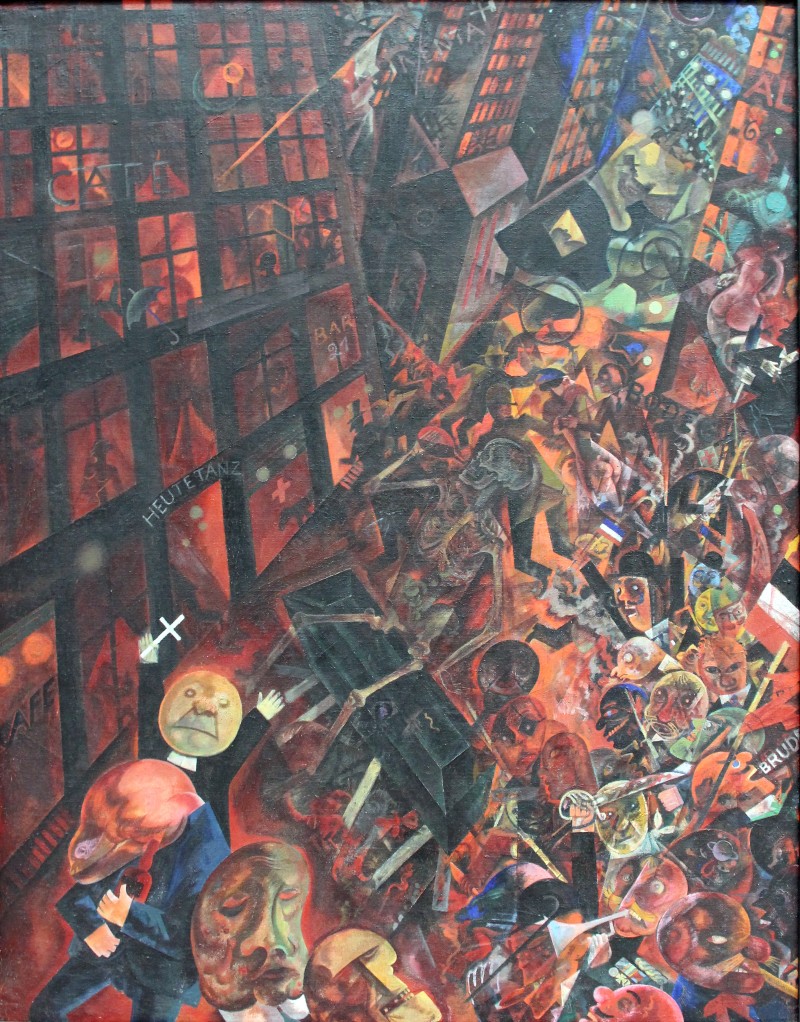 After the First World War German art was dominated by horror at the carnage of conflict. In A Funeral: Tribute to Oskar Panizza George Grosz uses the techniques of both Cubism and Futurism to emphasise his disgust at German society. Grosz’s friend, Oskar Panizza, a psychiatrist who was also a fierce critic of the German state, was still alive at the time of the painting, but was living in a ‘mental asylum.’ The subject of a funeral is a metaphor for the chaos of the German political system after the war.