8 things you may not know about Church of England funerals 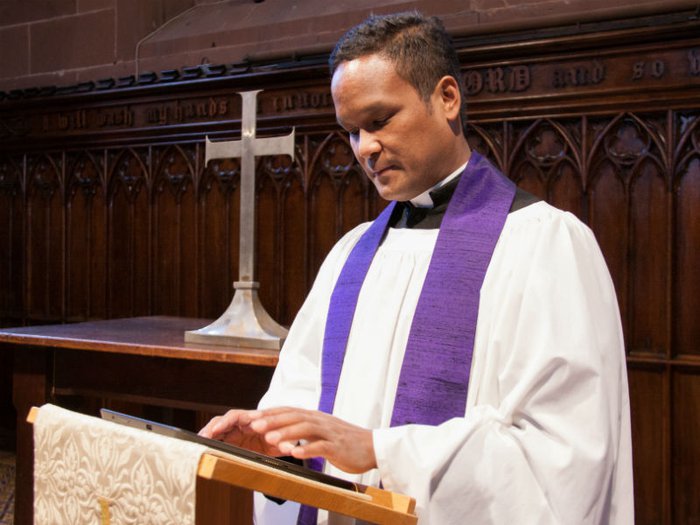 In England almost one third of all deaths are followed by a Church of England funeral service. That equates to 2,800 funerals a week on average. Yet despite this popularity, many people still have misconceptions about the Church and how it can help them after a loved one dies.

We spoke to Reverend Canon Doctor Sandra Millar, head of project and development, and award-winning celebrant Reverend Juliet Stephenson about the reality of a Church of England funeral. Sandra and Juliet explained eight key things that people often don’t know about Church of England-led funerals:

Anyone can have a Church of England funeral

Not everyone realises it, but if you live in England, you are automatically living in a Church of England parish and its clergy will lead a funeral service for anyone living within their parish.

“The church will not turn anyone away,” says Reverend Juliet Stephenson, “However religious or irreligious they are. Everyone gets the exact same treatment.”

A Church of England funeral can happen almost anywhere

Nowadays funerals don’t have to be in a place of worship or other religious setting. Even if you want your loved one’s funeral to be led by the Church of England, you don’t have to have the service in a church.

“Sometimes people don’t realise that you can have a Church of England-led funeral in crematoria, at a green burial ground, in a church, in a cemetery chapel, in a number of different places,” Sandra says.

So if you’re opting for cremation or a woodland burial, you don’t have to miss out on having a religious service. The Church of England will be happy to discuss alternative venues for your loved one’s funeral.

You can personalise the funeral to reflect your loved one

“Sometimes people haven’t been to a funeral for a long time and they have an image in their head of something quite old-fashioned,” says Sandra. “Actually, a contemporary funeral will be personal. Every Church of England funeral is personal, because it’s about a unique life.

“There are no rules about the type of coffin, or the colours you can wear. The only restrictions might be on how a gravestone looks, or the kind of things that can go in a churchyard. Your local vicar will be able to help you with the rules and how it works.”

“People have more choice now,” adds Juliet, “And things are not perhaps as traditional as they once were. Funerals have really shifted over the last 15 to 20 years. You don’t have to have a traditional coffin, you don’t need to have a hearse, everything doesn’t need to be black and gloomy.”

“Church of England-led funerals can be all kinds of things,” Sandra continues. “I led a funeral myself recently for a neighbour of mine at the local crematorium. He was a huge rugby fan and everybody wore the local rugby team colours, including me.

“So the funerals are personal, but it’s also held within the big framework of words that we’ve used for centuries, which people really value. Those words hold something timeless and something deep for people. You need something more than just your life and what’s here, you need something bigger as well – for some people that’s important. So we have both those things going on, the personal and the bigger picture.”

Sandra explains that the Church of England see funeral directors as an important guide to bereaved families during their time of need, and aims to work closely with them to arrange the funeral.

“Funeral directors are hugely important and together with local churches they work to serve local families in their community,” she says. “We’re very positive about that relationship and value its importance. Nearly always it’s the funeral director who contacts the vicar, so people don’t have to worry if they don’t know a vicar or a minister, because the funeral director will be able to put them in touch with the right person.”

You can be part of a community

An integral part of the Church is its emphasis on community. During times of bereavement, being part of a larger community can be comforting, and the Church can be the centre around which that community gathers together, as Sandra explains:

“For many people, particularly those who are in smaller, more rural communities, the local church is the place that holds the story of their lives. It holds the story, not just of immediate family, but of their sense of where they belong and their community back through time. It’s important for people to feel that sense of belonging and connectedness, and I think when we approach a funeral, we’re very mindful of the fact that people are not living in a vacuum. “

Juliet, who won Celebrant of the Year at the 2015 Good Funeral Awards, told us that part of her motivation to enter the nominations was to remind the funeral industry, and the public, that the Church is serving its community in this way.

“If someone dies in my community, chances are I will know them and chances are that I’ve baptised a few children in that family. I may also know some of the children within that family group because I go to primary schools, speak at assemblies and do after-school activities.

“When a family is hit with a bereavement, there is a lot of frenetic activity as the preparations are happening and the funeral takes place. I feel that the best people to help them are the ones who live within the community, such as the parish vicar.

“When we entered the competition, the reaction that we got from some people in the church was, ‘It shouldn’t be a competitive thing, you can’t really be judged.’ My answer to them was that we are celebrating best practice, we’re celebrating what we’re good at. I think we need to acknowledge that so that people say, ‘That’s my vicar. She married my sister-in-law and she buried my grandma. Next week she’s baptising my nephew.’ In that way, we become that person who holds them together in their joys and their sadnesses.”

The support is ongoing

Another key aspect of a Church of England-led funeral is that the support doesn’t stop once the funeral is over. The Church emphasises an ongoing support system that can be invaluable in the months and years after losing a loved one.

“After a funeral I would say to the family, ‘Don’t forget where we are, the church is open all day, every day. Come in and light a candle, give me a ring if you want me to come for a cup of tea.’ It doesn’t stop.”

“Because it is the Church of England, it doesn’t matter where people go,” Sandra adds. “You could be on your holiday down in Cornwall and feel really sad, and you can go to a church there to light a candle, or just sit in the quiet and say a prayer. Or you could be visiting one of our great cathedrals – lots of people do that, of course – and there’s that space to light a candle, to pause and reflect.

“And it doesn’t matter how long it’s been. We haven’t got any time limit. For a lot of people, the impact of loss sometimes really hits years later, sometimes when a second loss comes along. We’re still there.

“Particularly at a later stage in life, life after bereavement can be very lonely. We’re there with other people, not just for Sunday worship, but during the week too, with coffee mornings, lunch clubs, those sorts of those things. That’s important as well.”

There is a message of hope

An important part of the message of the Church of England, particularly during bereavement, is the hope of a life after death where you can see your loved ones again. However, as Sandra says, this message can help people through their daily lives too, helping them find hope for the future after a loss.

“We will talk about the Christian hope that we will see those we love again, but also hope, sometimes, is the strength to carry on day-to-day,” she explains. “That’s important as well. That’s where the whole community, and being able to come back and find support, is really important. Sometimes the idea of Christian hope is way in the distance, but the reality of getting on with life, next week, next month – you also need hope to enable you to do that.”

The Church of England is online

The Church of England with lots of information, FAQs and articles to help you find out more about funeral services.

“You can light a candle on there,” says Sandra, referring to the digital candles that allow visitors to pause and remember their loved ones online. “You can have a walk through the service and listen to funeral hymns as well. It gives people a lot of information on that site that will be helpful to them.”