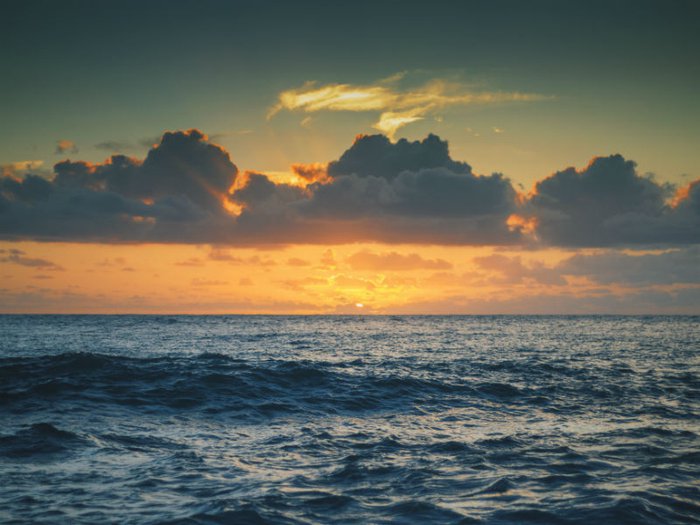 The UK has long been a seafaring nation. Burial at sea was once a traditional kind of funeral and often the most expedient on long voyages.

Today, only a handful of people every year are buried at sea as part of a traditional ceremony, so it’s often a newsworthy event. Yet for many people, seafaring or enjoying the coast was an important part of their lives.

A traditional of burial at sea is one option to consider, while other forms of committal at sea have increased in popularity.

Can I be buried at sea?

Yes: it’s still possible to arrange a burial at sea and it's considered to be a green burial option.

There are official guidelines to follow when arranging a burial at sea, from the official paperwork required, to the kind of coffin that someone can be buried at sea in. This has to have holes bored in it and be specially weighted, to ensure it will settle on the seabed.

In the 1800s, sailors who died at sea would be sent to a watery grave, stitched into their canvas hammocks, weighted down by a cannonball.

Naval hero Lord Nelson, however, was anxious that he wouldn't be buried at sea. After he was mortally wounded during the Battle of Trafalgar, the ship's surgeon, William Beatty placed the admiral's body in a barrel of brandy which preserved it on the month-long voyage home.

How do I arrange a burial at sea?

In order to arrange a burial at sea, you need to obtain a burial at sea licence from the Marine Management Organisation (MMO), which also provides information about the other things you’ll need to do and who to notify.

It’s possible to arrange a burial at sea yourself, but most families work through a funeral director, who may in turn have a good working relationship with a boat charter company specialising in sea burials and ashes scattering ceremonies.

Just as with a traditional cemetery burial, a good funeral home can help you arrange a burial at sea, handling paperwork and liaising with people and organisations, to ensure that the funeral runs smoothly, so families can fully focus on mourning their loss.

Alternatively, there are boat companies that specialise in burials at sea and ashes scattering ceremonies on the waves. These companies may be able to recommend a local funeral director who can also help.

Where can I be buried at sea in the UK?

There are three primary off-coast locations approved by the MMO – off The Needles, Isle of Wight; between Hastings and Newhaven on the South Coast; and off Tynemouth, North Tyneside – where burials at sea can be held.

If you have your own boat or are arranging for a funeral boat charter, you might also have to provide the MMO with evidence that your proposed burial location is suitable. Things to take into consideration include the water depth, currents, pipelines and areas that are fished.

Just like a woodland funeral, people can’t be embalmed if they are having a committal at sea and they should be wearing clothes made from biodegradable natural materials that will return to nature and won't harm sealife.

There may be fewer full burials at sea today than there once were, but it doesn't mean that people have lost their connection to the waters that surround our island.

Our guide to cremations discusses the fact that cremations give people the opportunity for ashes scattering ceremonies that are a further celebration of life of the person who has died. From casting ashes over the water at a favourite coastal spot, to Viking-style funerals, the sea can play a part in many kinds of special commemoration.

The Royal Navy chaplaincy officiates at the committal of the boxed ashes of those who served in the Royal Navy or Marines, at the request of families. These ceremonies take place at sea off Portsmouth, Plymouth and Faslane.

Portsmouth’s Maritime Volunteer Service also helps families who wish for a burial at sea or the scattering of ashes off the coast. It says that people who consider them include former members of the Royal or Merchant Navy and members of the coastguard or a lifeboat crew. They also arrange them for families who want to celebrate the life of someone who loved to fish, was a leisure sailor or someone who simply enjoyed being by the sea.

Solace Reef, located off the Dorset coast, is an underwater burial ground for cremated remains. Funeral ashes are placed inside Pyramid-shaped Portland stone obelisks, which are laid to rest on the sea floor, where they also double as a haven for marine wildlife.

Some people may simply book a trip on a fishing boat to carry out their own special burial at sea ceremony with their loved one’s ashes, following a cremation.

What happens at a burial at sea?

As with a traditional burial funeral, a religious funeral service or a ceremony conducted by a civil celebrant may be held at a place of worship or other funeral venue before the burial at sea.

Prior to the person’s committal to the deep, or their ashes being scattered, friends and family may share some words of remembrance, or offer a funeral poem, prayer, or blessing. The person's coffin may be covered with a flag, with a wreath of flowers on top.

Psalm 107 forms a part of of the Royal Navy’s order of service for burial at sea.

“Those who go down to the sea in ships and ply their trade in great waters, these have seen the works of the Lord and his wonders in the deep.”

Wreaths or flowers are usually placed on the water after the person’s coffin has been committed to the sea. Often, a toast is raised by mourners in the person’s memory.

Burial at sea around the world

Full burial at sea is still a custom in America, where in New England alone, there were registered 131 sea burials during 2014. Many people also choose to have their ashes scattered in the ocean, with the cremation ashes of Hollywood's Million Dollar Mermaid, the film star and champion swimmer Esther Williams, buried in the Pacific in 2013.

Pioneering organisations such as Eternal Reefs offer the chance for a loved one’s cremation ashes to be buried at sea in a man-made coral reef, while Florida’s Neptune Reef is a breathtaking underwater cemetery inspired by the Lost City of Atlantis.

Meanwhile, scattering ashes at sea is becoming part of new funeral rituals being observed in South East Asia, where space for traditional burials has become limited.

In Taiwan, its Department of Civil Affairs has been offering the bereaved free burials at sea for loved one’s funeral ashes as part of a move towards greener funeral options and to conserve space in rapidly-growing towns and cities.

In China, too, where annual grave-tending rituals are part of traditional funeral rites remembering the dead, authorities have also been offering ashes scattering ceremonies at sea in the hope that people will adopt new traditions as cemeteries become overcrowded.

Scattering ashes by the sea

The coast and sea are among the top five places to scatter ashes in the UK for a meaningful farewell.

You don’t need a licence to scatter ashes at sea, although you should be aware of other people that share the space and bear in mind the weather conditions – it can get very windy on clifftops, on the beach and out at sea.

A pre-paid funeral plan could help you with many funeral costs in advance, helping you to plan a meaningful celebration of life ceremony on – or by – the sea when the time comes.