10 of the world’s most beautiful cemeteries 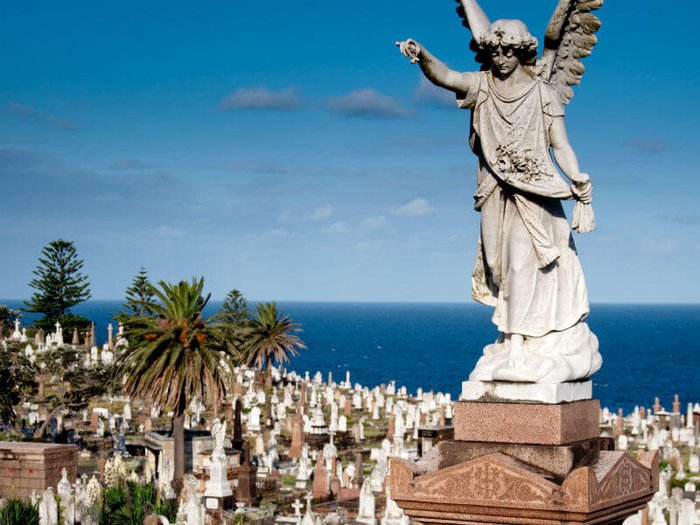 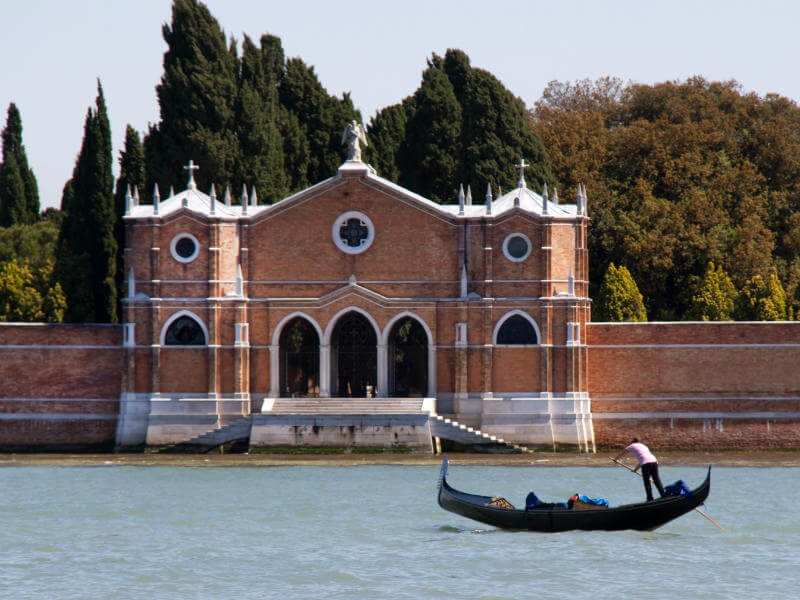 The isle of San Michele, situated in the Venice lagoon a short boat ride from the city, was first made into a cemetery in 1807. The island is beautifully landscaped with tall cypress trees and a 15th Century church from the island’s previous life as a monastic retreat. San Michele is still in use today and famous residents include the composer Igor Stravinsky and the poet Ezra Pound. 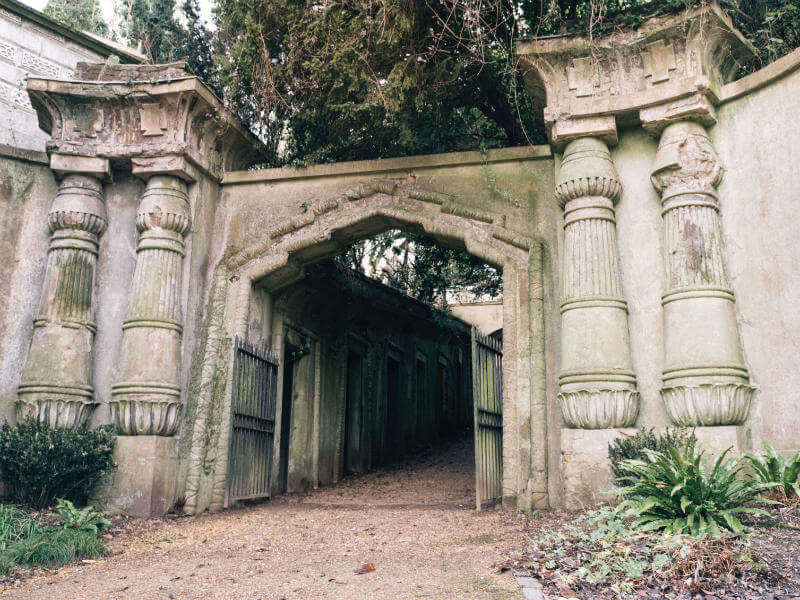 Based in North London, Highgate Cemetery first opened in 1839, and over the decades has become home to some of the most stunning monumental masonry and carvings you will see. Much of the cemetery is now overgrown and derelict, but this somehow adds to its allure. It holds a huge number of famous names too, including Karl Marx, George Eliot, Douglas Adams and Christina Rossetti, to name but a few. 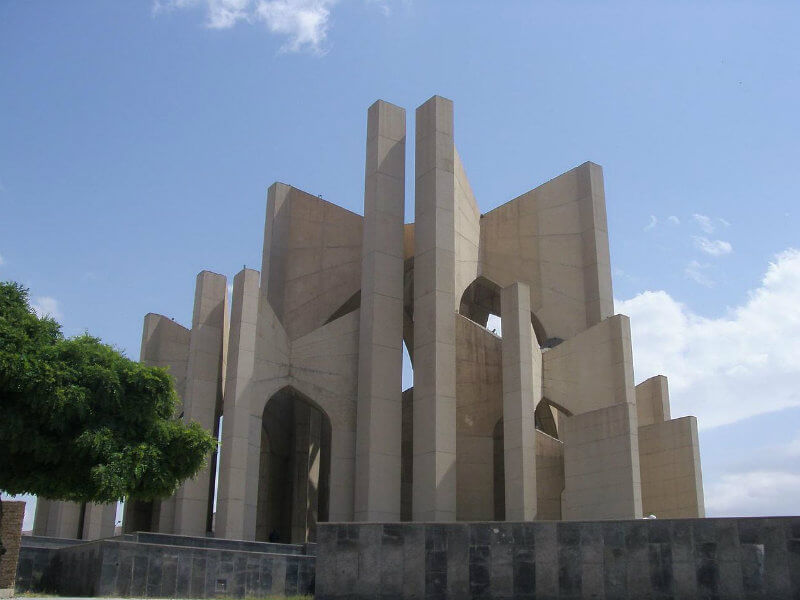 Also known as the Mausoleum of Poets, Maqbarat-o-shoara is where nearly 400 Persian poets have been laid to rest since around 900 A.D. The modern mausoleum structure combines sleek minimalist architecture with traditional Islamic geometric designs for a striking monument to some of the most important writers, artists and scientists of Persian culture. 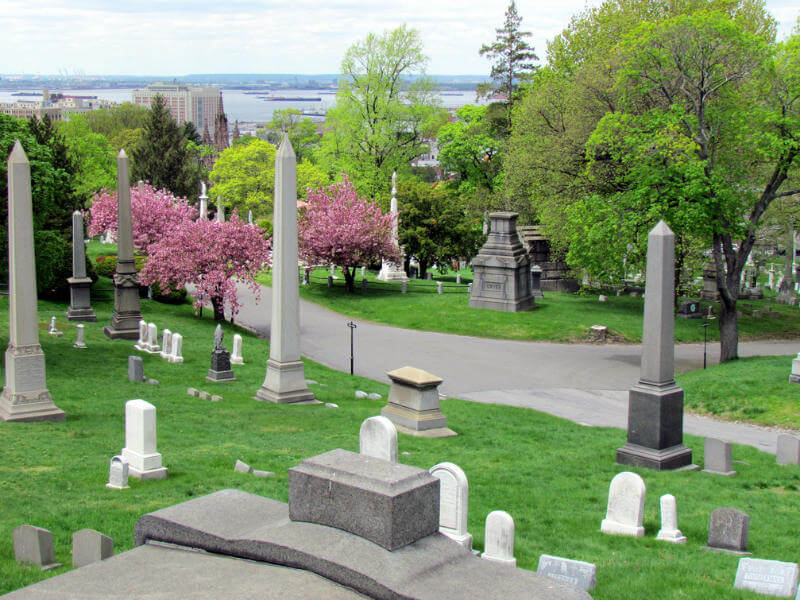 A green oasis in the heart of Brooklyn, New York, Green-Wood has been designated a National Historic Landmark for its prestige and beauty. Green-Wood consists of nearly 500 acres of rolling green hills, wooded areas and ponds, with over half a million permanent residents buried there. Among its famous Civil War generals, baseball players and politicians are some of the most impressive and beautiful gravestones you’re likely to see. 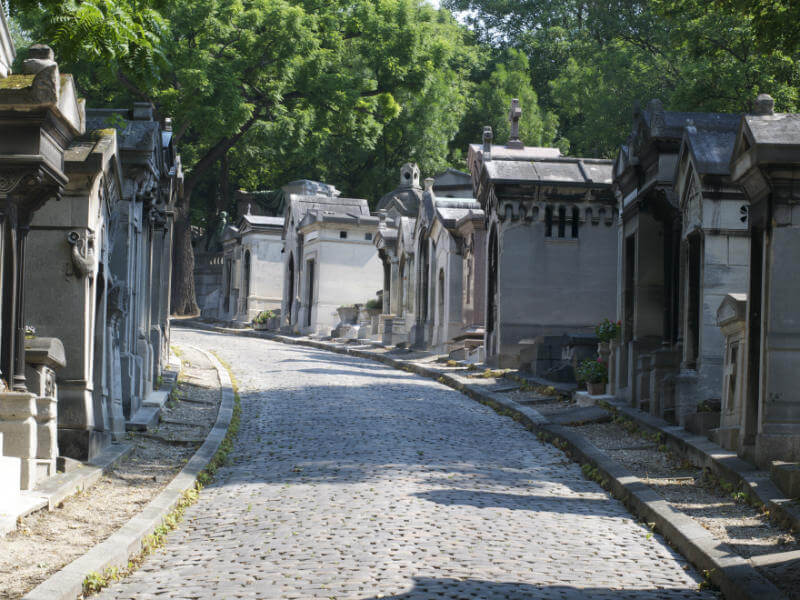 Located on the east side of Paris, Père Lachaise is often claimed to be the most visited cemetery in the world. Tourists make pilgrimages to see the final resting places of Oscar Wilde, Jim Morrison, and Edith Piaf. Filled with history, Père Lachaise combines verdant gardens with imposing funeral architecture in the heart of one of the world’s most beautiful cities. 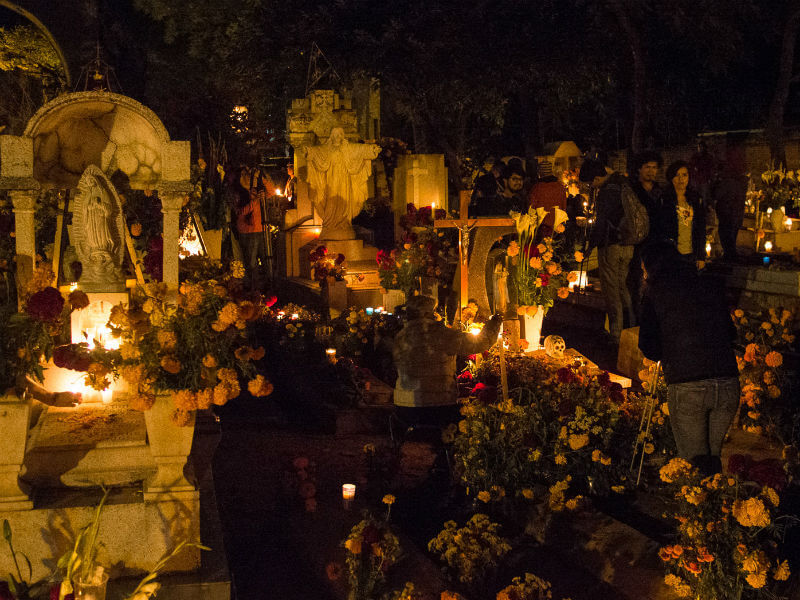 Oaxaca City’s cemetery is filled with graves and tombstones of all different sizes and styles, but it is during Dia de Muertos, or Day of the Dead, when the cemetery is at its most beautiful. The yearly festival commemorates the dead, and Mexicans take the time to decorate the graves of their loved ones with flowers, candles and all manner of tokens and gifts. The cemetery becomes a lively place filled with music, colour and activity. 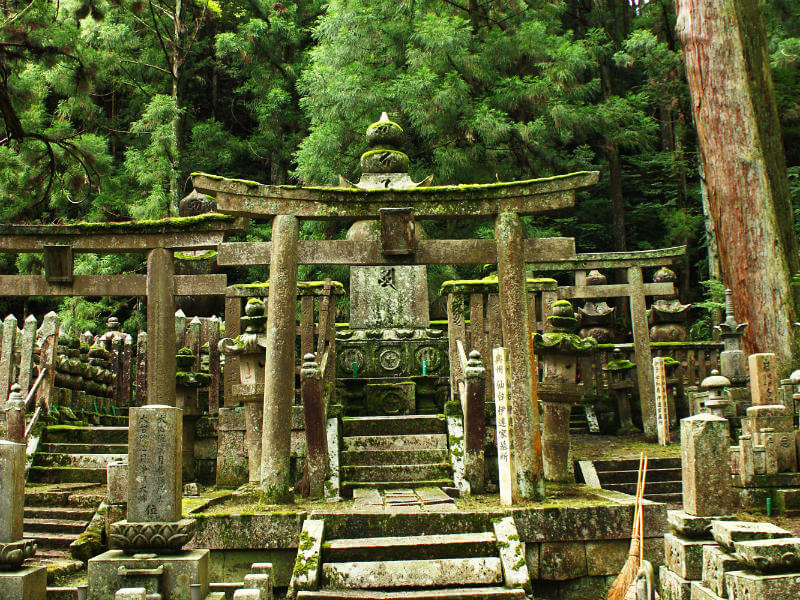 Okunoin temple and cemetery is set in the depths of deep evergreen forest, where thick green moss covers every rock and tombstone. Hundreds of statues of Buddhas line the paths and graves, often draped with red bibs and other small items of clothing by mothers wanting to protect their children. Okunoin has a unique atmosphere of sacred calm that visitors find deeply moving. 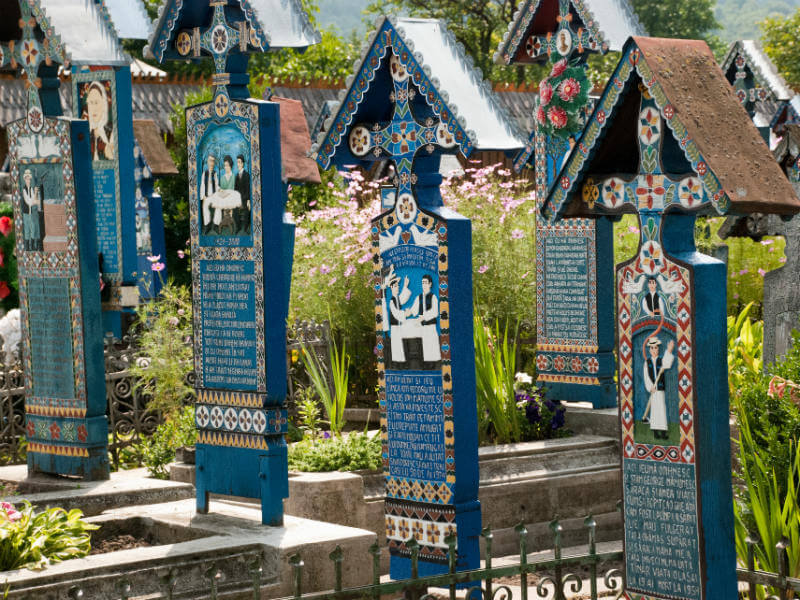 Literally translating as ‘merry cemetery’, Cimitirul Vesel is famous for the brightly coloured crosses that give this graveyard an unusually joyful atmosphere. Each wooden cross tells the story of who that person was, often with a cartoon-like illustration. Some of the inscriptions on the crosses are humorous and light-hearted poems. 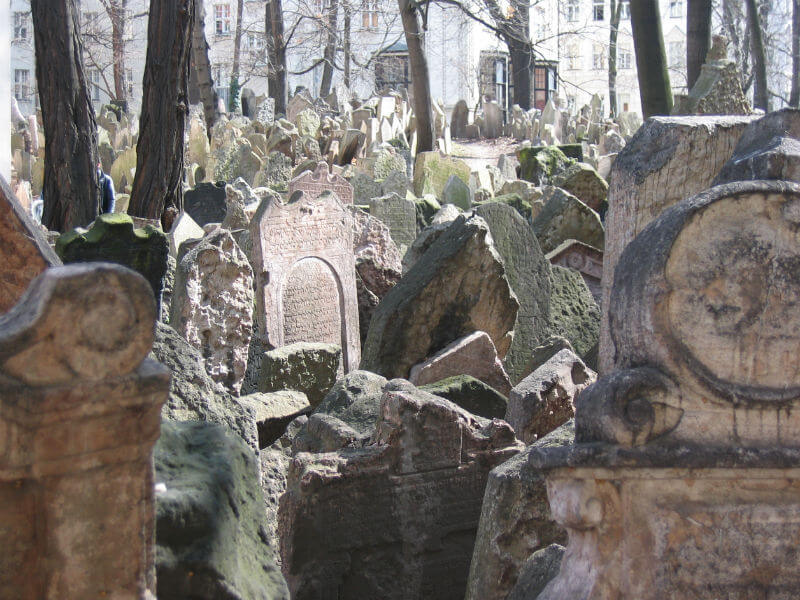 This graveyard is the largest Jewish cemetery in Europe and is nearly 600 years old. The last burial happened in 1787, after which new graveyards were opened outside the city. Many of the surviving gravestones are broken and crooked, but this definitely adds to the ancient beauty of the cemetery. The carvings and inscriptions that have survived are as beautiful as they are fascinating. 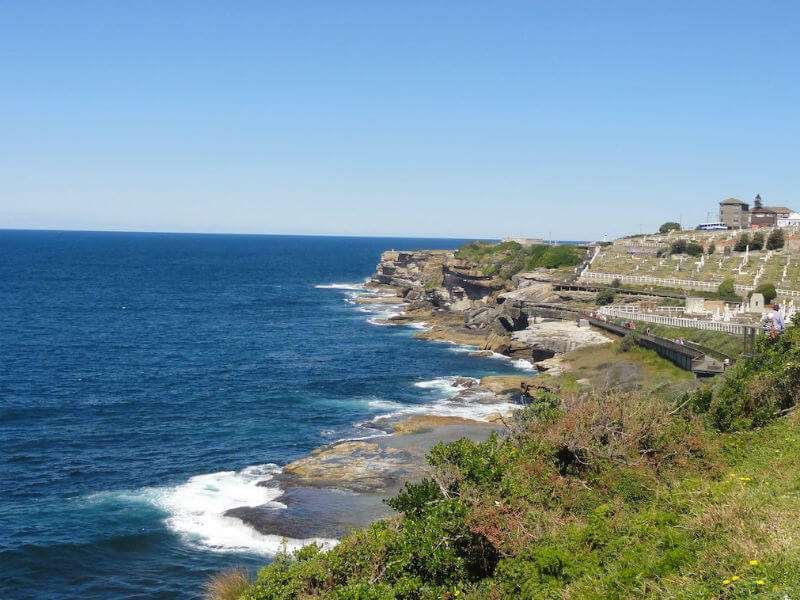 Any list of beautiful graveyards usually includes Waverley, and for good reason. This clifftop cemetery has a stunning view of the ocean, located just outside Sydney in the suburb of Bronte. First built in 1877, Waverley has many surviving Victorian and Edwardian monuments. Its residents include many of Australia’s most influential cultural figures, such as poets Henry Lawson and Henry Kendall, actor William E. Sheridan and author Ethel Pedley.