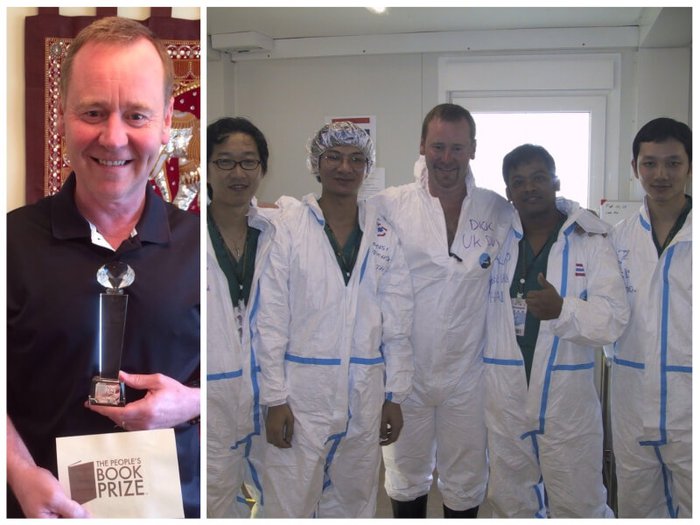 From being present as a uniformed police officer at the Hillsborough disaster, through to helping in the aftermath of the 2004 tsunami, Richard Venables has led a fascinating career. We had the chance to discuss with him some of the key aspects of his work in disaster victim identification.

Due to the nature of his profession, some of the topics discussed by Richard may be distressing to some readers.

What do you see as the biggest accomplishment in your career?

First of all, I’d like to say that I try and avoid ‘I’ where possible, because it’s almost always a case of ‘we’. Everything we did was really a team effort and even when I was in charge, it was never just about me.

From being given the remit to improve and implement the disaster victim identification (DVI) processes after the Hillsborough Disaster, and seeing how they went from being almost non-existent into working efficiently, in a way that provided a valuable service, would be a major accomplishment.

Also, I was decorated by the Queen in 2006 with The Queen’s Police Medal for distinguished service for my work in DVI. To have my work recognised at the highest level ranks as one of my most satisfying achievements.

How have you seen the handling of mass fatality incidents change from being on site at the Hillsborough disaster, to now?

There were 96 fatalities at Hillsborough and we really didn’t have any sort of processes in place to deal with that number of people who have died in a single incident. From that point, we developed forensic processes for gathering information, identifying items, taking DNA where possible and fingerprints, and crafting from the ground up a means of efficient victim identification.

Over the years our job was largely to improve that process in a theoretical manner. Luckily, these incidents are extremely rare and the processes we created were not often put into practice. But, when I left the field in 2012, we could be confident that in the event of a mass tragedy, we would be able to do everything to recover, identify and return as many people as humanly possible.

What do you see as the most important aspect in creating these protocols?

These protocols were created with the bereaved in mind after such tragic circumstances. The care with which we treat people that have died is a mark of a civilised society and there is a special responsibility placed upon those who are entrusted with the recovery and identification process to ensure that the victims and their loved ones are treated with the utmost care and respect at all times.

The victims deserve dignity, but we also work for the families, the loved ones and those who are left devastated by such occurrences.

My mantra has always been: ‘At the worst time of their lives, we owe it to them, as professionals, to do our very best’

How do you think the handling of mass fatality incidents could potentially be improved in this country and abroad?

I think automation and electronic systems could be more widely implemented. The UK has access to a computerised matching system called Plass data, which provides for a faster and more efficient means of reconciling ante-mortem data, such as dental records, potential sources of DNA and other identifying items, and post-mortem data, but the program must be input manually.

My vision would be to see data extracted from the ante-mortem and post-mortem collections, directly populated into the software. At the moment, to the best of my knowledge, we still have to record post-mortem data onto paper thus causing a delay in matching up with ante-mortem data.

How dramatic was the difference when you were called in to help after the Thai Tsunami?

Well, when we first got the word that it had happened, we initially set up our receiving mortuary in Fulham; we weren’t initially deployed on site. It was very quiet initially and in the first three weeks we only received two or three dozen people who had died in the tsunami. Eventually we realised we would have to go over to Thailand and be involved directly and that’s when the scale of it really hit home.

My team and I had dealt with mass fatality incidents but to arrive in Phuket and see containers filled with people who had died in the incident was overwhelming. I realised once I’d arrived that we would be there for a long time, and the team were eventually there for 18 months.

I think it's a testament to how good the process has become, that less than 400 bodies went unidentified in Thailand, though Indonesia suffered the greatest loss.

The British lost 149 people in Thailand with 6 still missing from that total. I was lucky enough to visit a specially built cemetery for those who had not been identified. The Thai government hold all of their details, carefully logged and ready should anyone come forward with some information or something else which may help their identity be uncovered.

How has the trauma of these events affected you?

It’s always the children that stick with you I think. I will never forget carrying children from the containers where they were being stored in Thailand to have them identified. You’d have them in your arms, like you would your own kids or grandkids, and they might be dressed in outfits or ready for the beach. That’s the trauma that stays with me. And it wasn’t just Thailand.

Children are a part of life which means they’re a part of death. The nature of the incidents we dealt with, meant that there would always be children involved; because these accidents were completely unexpected. They could be families on holiday or people going somewhere on the train, that’s what affects me most.

What do you focus on when you’re not working?

Well, besides promoting my book and doing talks about my life and my career, I spend time with my family. I’m a primary carer for my mother, who still lives alone at the age of 95. I have four children and 12 grandkids, so they keep me busy!

I still lecture to Masters Students at Huddersfield University but outside of that and the DVI work, I actually spent time working as business manager for Howard Webb, the football referee. We were Police officers together and I worked with him for about five years, managing his off the field business as he went right up to World Cup level, refereeing the final in 2010. I used to be a referee myself and we’re good friends so it seemed to be a good fit!

If you could give one piece of advice to people based on your experiences, what would that be?

I remember one train derailment we had to deal with where a pair of young children had died. I could see our officers were struggling so I called a temporary halt to things.

No one is immune from pain. I told them that however rough the job is, which it was right then, the parents would be having a worse time. And we got the work done.

But to the public I would say that based on my experience, if you or a loved one is involved in one of these events, you can be confident that we will be able to identify any casualties and provide closure.

More importantly, I’d like to say that these events are exceptional. These are things people worry about, but the chances of you being involved are much, much slimmer than you winning the lottery. They’re not a reason to miss out on living life.

Richard’s autobiography, ‘A Life in Death’, won the People’s Book Prize (non-fiction) 2017 and is published by Thistle Publications. The book is available as a paperback and download via Amazon.co.uk

He can be booked to give a talk on his life and work, entitled ‘Disaster Detective’, details of which can be obtained via email, richard.venables09@gmail.com or by contacting him directly on 07774 875692.