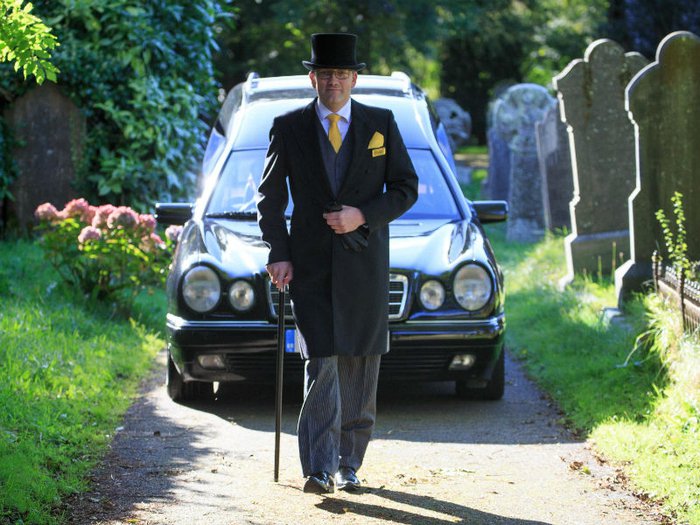 Scott Watters helped save lives in the emergency services, before following an instinctive draw to the funeral profession. He opened Cornwall Funeral Services in 2015 with Keith Edwards, a long-time friend with whom he’s also part of the local musical theatre scene. Here, Scott shares some of the things he’s learned about life and death along the way.

Funeral direction is a real privilege. You’re caring for someone who was really loved by a family that has asked you to look after them. It’s the last act of kindness and dignity you can do for someone, something that each one of us deserves.

I’ve done all sorts of things in my life. I studied computer programming at college but never worked in the field, instead starting out as a professional musician doing pubs, clubs, cabarets and holiday camps. I was a special constable for a while before joining the ambulance service and becoming a paramedic.

I went on to become the ambulance service manager responsible for the West of Cornwall and Isles of Scilly, then the clinical lead for the NHS 111 service, covering a large part of south west England and south London. Eventually, I decided to follow what I wanted to do for years – to become a funeral director.

I’d been exposed to tragedy and death during my career. As a paramedic you have to deal with death and telling people the worst possible news, that their loved one has died. I think my experiences have given me an awareness of the appropriate way of talking to people about death and about their loved ones.

Breaking bad news is always difficult and does affect you. But in some ways, you can feel you’ve helped as much as you can, by using the right language and offering support in a dreadful situation, when you can’t say everything’s okay.

I remember my first resuscitation in the ambulance service very clearly. Sadly, it was unsuccessful. To this day, I could still drive to the house where it happened. Although it doesn’t continue to affect you, you remember places, and most importantly, the people.

People still deserve to be treated as individuals when they die. I want to feel when helping a bereaved family that I have a true understanding of the person who has died. Hearing about people’s lives enriches us and makes us appreciate the individuality we all possess.

It’s so important to listen closely to what people who have been bereaved have to say. It can take time and patience, but listening and taking things on board is very rewarding. It also helps me do my job. The funeral is part of their journey through grief. It’s an important event and often part of the emotional healing.

Every single family is different. Some families want to absolutely celebrate that person, while other people want something more quiet and reflective. I say there are very few wrongs at a funeral, but many different rights.

A lot of funerals are very traditional, but you know something special’s coming when someone says: “They would have loved it if we could…”

One family put a note in the order of service asking people: “He used to dance to this so, dancing is encouraged!” The priest and the partner of the person who had died did exactly that – I resisted the urge to join in for fear of demonstrating my two left feet.

Technology helps us so much these days in making friends and family far away still part of the funeral. We streamed a funeral only a few weeks ago to close family members in Australia who couldn’t make it there in person. There is the technology to do so much and we are always willing to do take on something challenging.

A couple of funerals have been really big parties. The family of an 11 year-old held a two-hour party before the committal. Two hundred people including friends from his school came. It was just as the family wanted and a very moving occasion, but not in any way sombre until it was time to move on to the committal when it became far more reflective. It was truly a farewell party.

Some people who work with death need to talk and that’s okay. In the ambulance service, you’d vent your feelings with your crew mates and I’ve always been blessed by being able to do that. Others, rightly, seek counselling on occasions.

One of the ways I leave work behind is on my motorbike. It’s a Pan European 1300 tourer and riding it is cathartic, because you need to commit your mind to concentrating on the road ahead of you. It helps me turn off from other pressures.

There’s still the music, too. Keith and I have worked on many productions over the years. I’m just about to play bass for a production of Andrew Lloyd Webber’s CATS in Newquay.

I also used to judge for the Cornwall Panto Awards. It was billed the Oscars of the Cornish Pantomime Scene and very tongue-in-cheek, although it drew a crowd of around 1,500 people every year.

The music at my funeral would be eclectic. As a musician, it’s very difficult to choose just one a funeral song.

Long Train Running by the Doobie Brothers would be up there and Andrew Lloyd Webbers’ Variations on a Theme by Paganini - which movement would be up for discussion. I’d also like Uptown Funk – I prefer the Tim Akers and the Smoking Section version – and Circle of Life from the Lion King.

I want my funeral to be a celebration of life. I think I’ve had what you’d call ‘a varied life’, but I’ve no idea where I want my ashes scattered. So I think my five children should choose an appropriate location where they would want to go and take a moment to reflect.

The life philosophy I’ve learned from death is that life really is for living. By that I mean, get out and do what you really want to do. There’s a chance there won’t be the opportunity tomorrow.

That’s something easier said than done, I know. All you really leave behind of value in life are memories. So, live your life creating them.