Grief before death: Why pre-bereavement matters 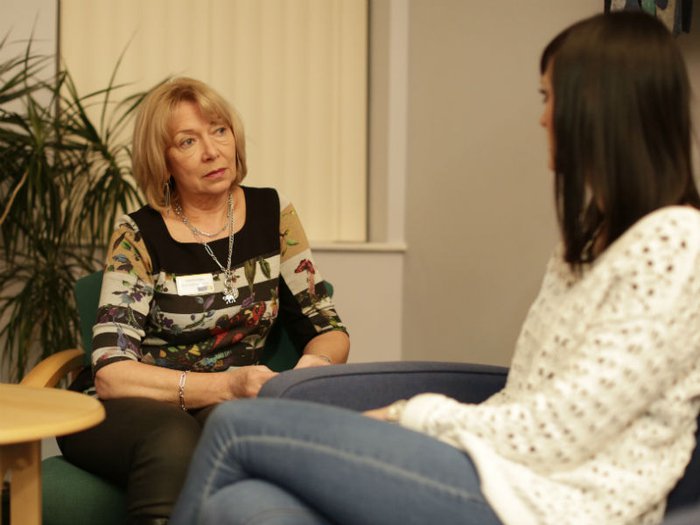 Grieving after someone you love dies is expected, if not always predictable in how it affects you. Grieving before someone passes away, known as pre-bereavement or anticipatory grief, is less recognised. Many people who are facing the death of a loved one who has a terminal illness are not aware that they are already experiencing feelings of grief. But acknowledging pre-bereavement, says Jane Murray of Marie Curie, can be a vital step in helping families through the most difficult of times.

Jane has 25 years’ experience nursing in hospices, helping people at the end of their life and their families. After completing counselling training, Jane has spent the last 10 years at Marie Curie in family support. She now manages a team of 32 volunteers, eight of which are qualified counsellors. “They’ve all done 60-hour training on loss and grief and how to work with bereaved people,” Jane explains. “Between us we offer, depending on the needs of the person, either supportive listening or counselling, before and after a person dies.”

Because Marie Curie offers help to those coping with terminal illnesses, Jane is familiar with the idea of pre-bereavement, which is known as anticipatory grief. But often, she says, families are unaware that grief can begin to affect them even before their loved one dies.

“A lot of times, before a person dies, I meet the relatives and I can see all the anxiety they’re experiencing,” Jane says. “When I have a conversation with them and explain to them that actually they’re grieving already, there is a look of relief on their face. It all makes sense then, why they’re feeling like they are. The patient and the relatives may all begin to grieve at the time of the diagnosis. When that bad news is broken, that’s when the grieving starts.”

It could be that people affected by terminal illness in their family do not consider seeking emotional support until after their loved one dies. But coming forward sooner, rather than later, could help the grieving process.

“I find that the people who come forward before the person dies may need very little support after their loved one has died, because the grief has already been recognised, we’ve already talked about coping mechanisms,” Jane says. “They’ll need maybe one, two, or three sessions afterwards, just to reaffirm that what they’re feeling is normal and maybe talk about the funeral. But people who don’t come forward until after the person has died, they generally need support for longer, because they haven’t spoken about the emotional impact at all. So we have to go right back to the diagnosis, right back to that time before the person died and go through that whole journey from the very beginning.

“But bear in mind everybody grieves differently. I’ve had many, many people say to me before the death, ‘I can’t engage with you now, because I need to keep it together. I need to keep emotionally strong. I can’t crumble. I’ll come forward afterwards.’ That’s their choice, but in my experience if they come forwards before the death it can be a lot easier afterwards.”

Memory making with a loved one

If a person does choose to access support before their loved one passes away, Marie Curie has many ways of helping patients and families through this pre-bereavement period, from one-to-one supportive listening and counselling to family group ‘memory making’.

“A lot of the work involves memory making,” Jane explains. “That can be anything from having a significant conversation that they keeping putting off, to making scrapbooks, taking photographs, making memory boxes. That can be something really nice to do with the patient and the relative.

“I find that when the person dies the one thing that gets forgotten very quickly is the sound of the person’s voice. So having a recording of the voice can be powerful. Sometimes, for example if the patient is going to be a grandparent or a parent and they aren’t going to see that child be born or raise their family, I would ask the patient, ‘What’s your favourite fairy story from when you were a child?’ Usually most people have one. And then, over a number of days and a number of sessions, I will get them to record that fairy story and then it can be uploaded onto a DVD and be memorialised.

“And the same concept can be done with letters. Instead of writing someone a letter they can record a letter. The voice is so important, which is why many people don’t delete answer machine messages.

“Another thing I might do is show a family an example of an emotional will, so they can see what it looks like, and that might give them ideas for the conversations they want to have. Then the emotional will can get filled in by the family together, which encourages a conversation.”

All these activities aim to help the family through the pain of pre-bereavement and prepare them for a time when their loved one will not be around anymore. By recognising the grief that families feel before the death, Marie Curie’s support staff hope to give people who are bereaved the support they need before, during and after their loss. This is why understanding pre-bereavement is so vital: so that families can make the most of the time left with their loved one and begin to process their loss in a healthy way.

Visit the Marie Curie website for more information on the important work they do, or to make a donation. You can also call their support line for free on 0800 090 2309.