Triumphs and tributes at the Good Funeral Awards 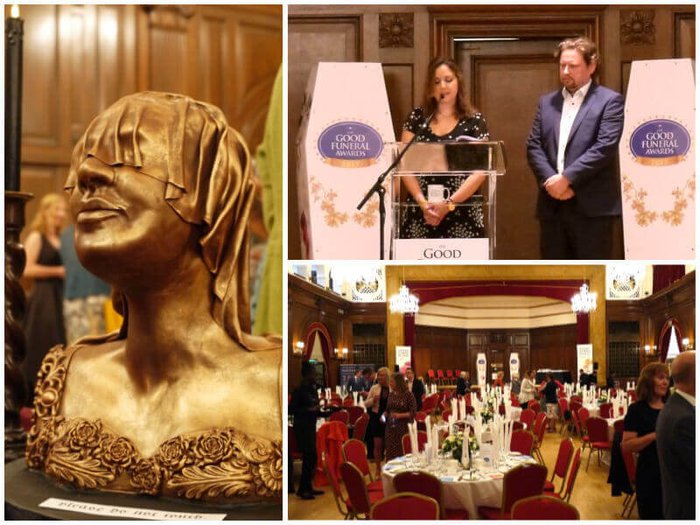 The nation’s top funeral directors, gravediggers and doulas were celebrated yesterday, in the end of life profession’s annual awards gala.

The Good Funeral Awards 2017, held at London’s Art Deco Porchester Hall, kicked off with a champagne reception, accompanied by music from harpist Allegra Shock, around a centre piece cake by Britain’s “most morbid manipulator of marzipan”, Annabel de Vetten. The stunning cake was based on the funerary sculpture on the tomb of Empress Elisabeth Christine von Braunschweig in Vienna, Austria. 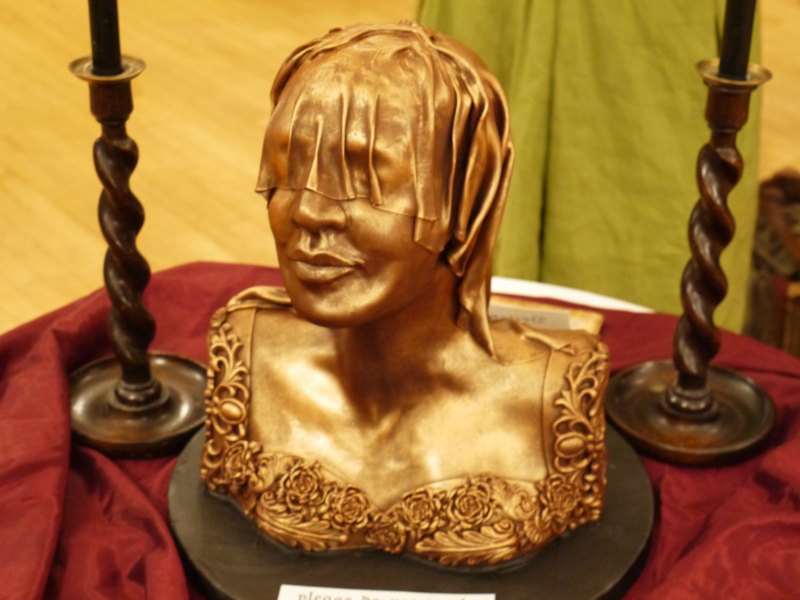 Annabel de Vetten’s cake, which was auctioned off at the end of the event.

With coffin-shaped trophies, the awards celebrate the achievements of people in the funeral profession who go that extra step to help the bereaved.

Dubbed the ‘Oscars’ of the funeral industry and attracting national media headlines, the honours were presented by author Guy Browning to this year’s leading lights.

With best funeral arranger, top funeral florist, caterer and gravedigger among 25 funeral awards categories this year, there was even an award for the most innovative way for people to keep or scatter their loved one’s ashes. 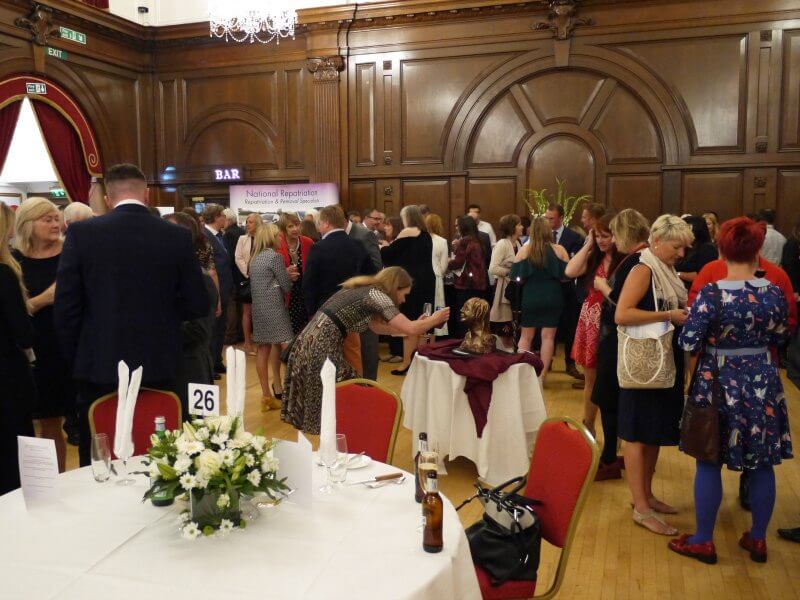 The champagne reception at Porchester Hall before the awards ceremony.

The Funeral Guide team was among hundreds of members of the funeral profession who travelled from across the UK to attend the event and celebrate each other’s achievements.

Funeral Guide was nominated for Most Helpful Funeral Advice Website, with the accolade ultimately going to Nelson’s Journey Youth Panel’s smartphone app, which offers guidance and support to bereaved children coping with grief.

Funeral Guide was also among the award sponsors, handing the trophy for the Anatomical Pathologist Technician of the Year to Dr. Wendy Birch, with Lara-Rose Iredale as runner-up. 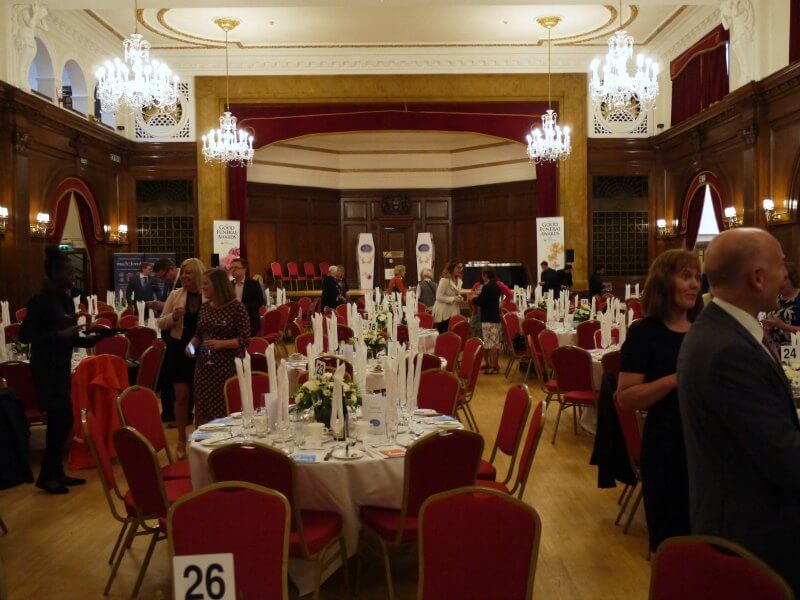 Five new award categories were introduced for this year’s ceremony including the Doula of the Year Award, which went to Felicity Warner for her work with the dying and their families. Sometimes also known as ‘soul midwives’, doulas help people feel safe and supported in their final days.

Every year, the awards reflect how the funeral profession’s care for people continues from deathbed to grave – or cremation urn. Honours included best gravedigger, burial ground, crematorium and crematorium assistant.

In another new category at the Good Funeral Awards 2017, the Care of the Deceased Award was created to reflect the respectful way that people who work behind the scenes in funeral homes and mortuaries look after people after their death. The winner was Cara Mair and the team at ARKA Original Funerals. 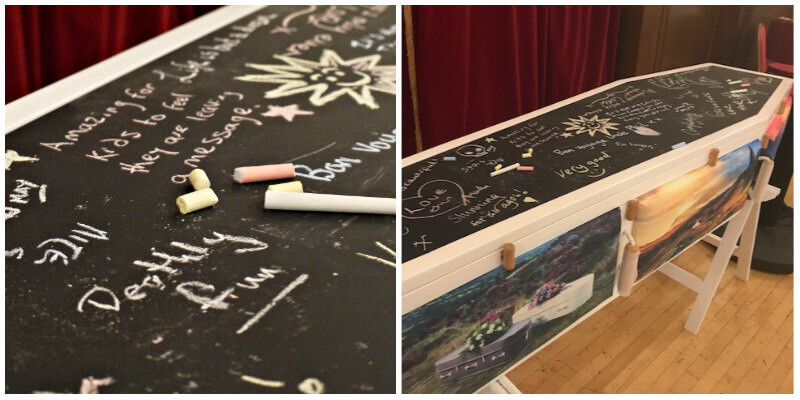 Guests were invited to write on a Pathway Coffin on display, from J.C. Atkinson.

The judges announced a supplementary Award for Innovation to J.C. Atkinson for their Pathway Coffin, which was on display at the Good Funeral Awards. Among other award-winners was Sacred Stones, winning the ‘What to do with the Ashes’ Award for its innovative long barrow columbarium.

At the end of the awards ceremony, Louise Winter of Poetic Endings funeral directors paid tribute to Jon Underwood, the founder of the Death Café movement who died earlier this year. Jon’s sister, Jools Barsky, accepted the Outstanding Achievement Award in honour of Jon’s contributions to the conversation around death and dying, to great applause and a standing ovation. 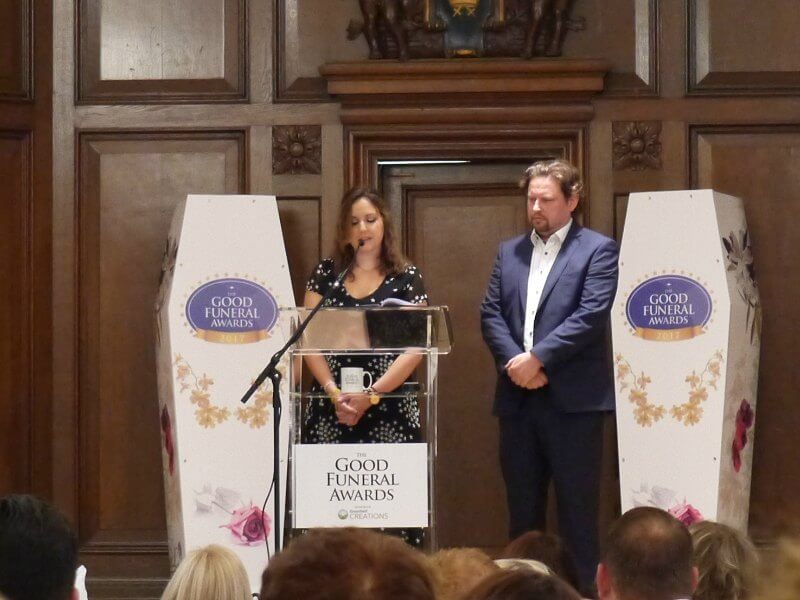 “It was fantastic to see people from all walks of the funeral profession come together to acknowledge and celebrate the good work done to help the bereaved,” said Gary Moyle, head of digital at Funeral Guide. “Meeting with funeral directors, florists, caterers, doulas and coffin makers, it’s clear to see that everyone who attended the Good Funeral Awards has a love for what they do.

“The funeral industry is rarely portrayed well by the media,” she said, “But the Good Funeral Awards show just how much good goes on behind the closed doors of the undertaker’s parlour.”

Visit the Good Funeral Guide blog to see the list of winners in full.