Be a friend – get talking about grief 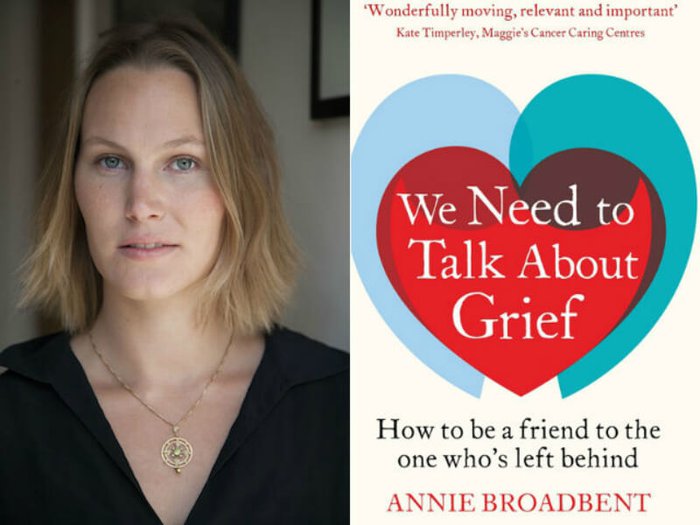 We need to talk about grief, says Annie Broadbent. The psychotherapist, with a particular interest in supporting the bereaved, is the author of a best-selling book about just that subject – written when she was still raw from the death of her mother, Caroline.

Not everyone knows how best to support a friend or family member who’s been affected by a loss and of course, each of us can be touched by a bereavement in different ways. In her book, Annie explores the ways and meaningful gestures, with which we can try and reach out to a friend who’s experienced an overwhelming loss.

Reflecting on her own journey, she also drew on the first-hand experiences of other people who’d lost a parent, partner, friend or sibling. What did it feel like? What did you want to hear? What should friends have avoided saying? And what did (or didn’t) help? she asked.

“At the time I wrote it, I was still at a very raw stage and it would be a very different book if I’d written it now,” she reflects, five years on from her bereavement.

“Grief is an ongoing process, which can be hard to fathom”

After nursing her mother in the fortnight leading up to her death, Annie began volunteering at the London hospice, St Christopher’s, which had provided invaluable support to them. While she was writing the book, Annie also made a career change, from charity worker to training to become the qualified psychotherapist she is today.

“At times, it was difficult to look back and stay loyal to the me who wrote the book,” she says, looking back on her newly-bereaved self. “I recognise now when I work with bereaved people - that won’t always be all of who they are.”

Since she became a therapist, Annie’s provided support to hundreds of people, including those enduring the difficult stages of grief and others yet to come to terms with a years-ago loss too painful to think about.

“Grief is an ongoing process, which can be hard for people to fathom” she explains. “My training certainly helped my bereavement - I learned not to project my own feelings onto others. Writing the book helped me focus on what I’d been through, but by the time I began interviewing people for it, I’d also begun to get a handle on what was mine and what was theirs.”

"It’s not always clear what a bereaved person needs"

If you want to reach out to someone who’s lost a loved one, but are unsure how, help will be on hand very soon. From December, Annie will be regularly featuring on this website and answering your own questions about grief and coming to terms with a loss.

“I do believe it’s possible for people to understand another person’s grief and what they are going through,” she says. “But that doesn’t mean it will be exactly the same for them as it was, or is, for you. Sometimes saying ‘I really get what you’re saying’ is better than ‘I understand’ which can sound as though you’re saying ‘it was the same for me’.

“It’s not always clear what a bereaved person needs, though, so you have to – gently – check it out with them.”

Annie hopes that people who’ve lost a loved one will also reach out to her via Funeral Guide. She will be launching an advice column on this website, which will run every second Thursday from December 1. She’s looking forward to helping and we’ll be featuring your questions on the page.

“I often hear from people ‘other people were much closer to them, so why should I be taking it so hard?’ It can be incredibly difficult for people to own their pain and ask for help,” she says.

“I hope,” she says, “that my advice column will give the bereaved, and friends and family who want to support them, a sense they’re not alone.”

A problem shared – write to Annie

If you have a question for Annie’s forthcoming advice column on Funeral Guide, do get in touch with her at DearAnnie@funeralguide.com