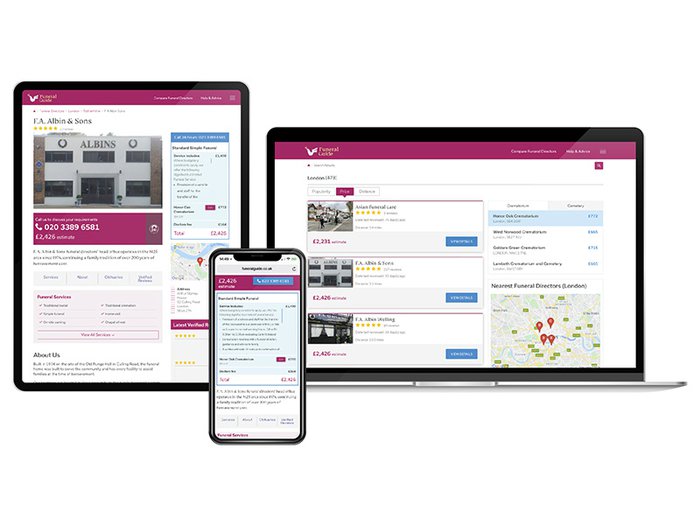 Alongside the price for a simple funeral, Funeral Guide also shows estimated burial and cremation fees, collected by Funeral Guide from over 2,300 cemeteries and 275 crematoriums, as well as estimated doctors' fees. With this information, the bereaved have access to an estimate of the total amount they can expect to pay a funeral director in their local area for a funeral.

Why this project is vital

Funeral Guide believes that providing clear and accurate pricing to the bereaved will help them make an informed decision at one of the most stressful times of their lives: organising the funeral for a loved one. We are not alone in this belief.

The Competition and Markets Authority's (CMA) preliminary findings into the funeral profession have shown that price transparency from funeral directors is a key area that needs to improve. Upcoming government regulation in Scotland also has a clear message when it comes to clarity of pricing in the funeral profession, and points to potential legislation for the rest of the UK.

As part of their preliminary findings, the CMA highlighted the importance of independent websites which allow people to compare funeral directors. We believe Funeral Guide now provides bereaved families with a vital resource when it comes to comparing the cost of funeral directors in their local area.

Claire Brandon, who manages Quaker Social Action's Down to Earth project, which supports people in funeral poverty, has welcomed Funeral Guide's move. "Online price transparency within the funeral industry is essential to help bereaved people have a smoother experience when arranging a funeral. Having a realistic idea of prices and being able to compare them can help people weigh up their options from the comfort of their own home, before they even have to pick up the phone or step into a funeral director’s office, which many people find daunting."

The National Association of Funeral Directors' Chief Executive, Jon Levett, echoed sentiments that pricing transparency was core to their organisation and important for the profession as a whole, saying "The NAFD has actively encouraged members to publish their prices online since 2016 and so welcomes any initiative which supports this objective and helps consumers to make an informed choice of funeral director, both in terms of the quality and range of services provided – but also the costs too."

Lewis Shand Smith, Independent Chair of the Funeral Service Consumer Standards Review steering group, agreed that a move towards clear and comprehensive online pricing was a positive thing, saying "It's great to see the sector taking steps to improve transparency."

"We're proud to launch online pricing," commented Funeral Guide CEO, Ed Gallois. "For the last few years we've worked hard to expand the help we provide on Funeral Guide for the bereaved and this is a major step forward. Having a clear idea of the costs involved in arranging a funeral, and being able to compare providers by price, should hopefully remove some uncertainty from what is an emotionally taxing process.

"Our goal at Funeral Guide is to help the bereaved make an informed decision when choosing a funeral director, so they can then focus on saying goodbye to their loved one."

To join thousands of other funeral homes across the UK in providing clear and comprehensive pricing, please send us the cost of your simple funeral and what's included (excluding disbursements) to pricing@funeralguide.co.uk