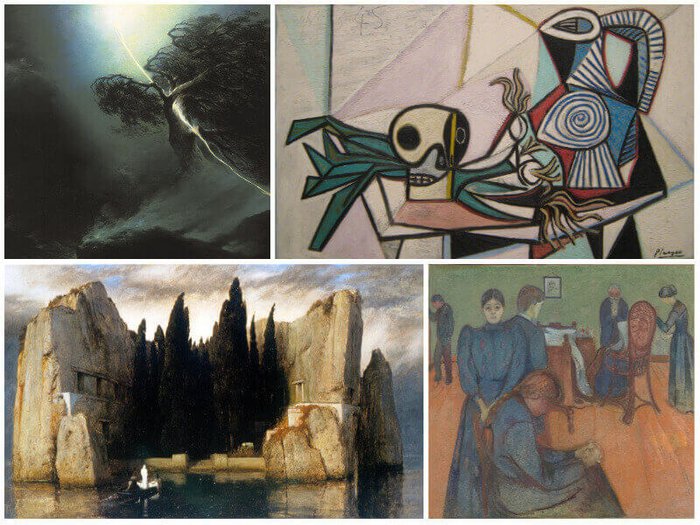 There has always been a place for death in art. Over the centuries, artists have used paint, pencil, canvas and clay to reveal their deepest thoughts on death – and inspire the person viewing the artwork to ask their own questions about life and loss.

These 10 masterpieces show how artists, some world-famous, others lesser-known, have explored grief and death in art, capturing the profound relationship we all have with our mortality. 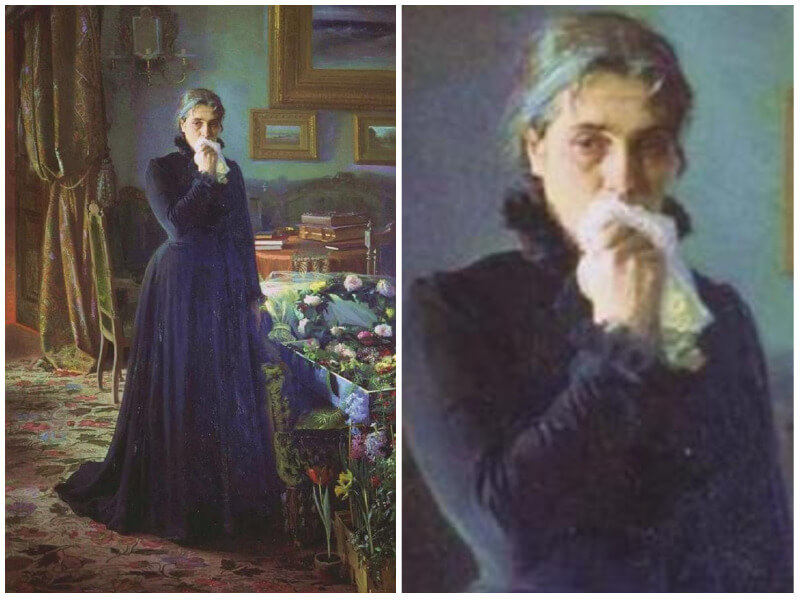 19th Century Russian painter Ivan Kramskoi strived to portray the realism of human emotion through his portraits. The image shows a widow, robed in black, holding a handkerchief to her mouth. Kramskoi captures the weariness in her eyes as she looks lost in thought and bittersweet memories.

The scene of the family home, with sympathy flowers and funeral wreaths piled up, is as recognisable to grieving families today as it was in the 1800s. 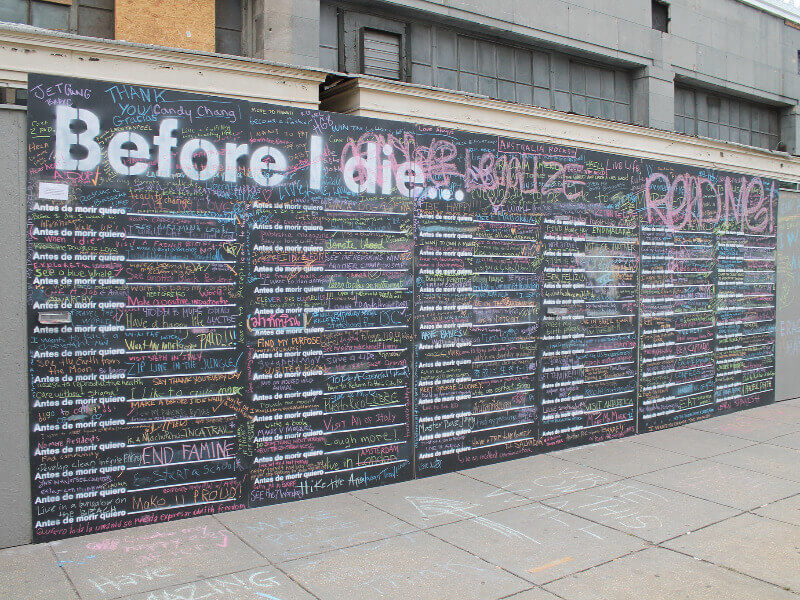 In this ongoing ‘participatory art’ piece, members of the public are invited to write down what they want to achieve before they die on a giant chalkboard wall. Modern artist Candy Chang built the first ‘Before I Die’ wall in New Orleans after the death of a loved one got her thinking about what matters in life.

Since then there have been over 2,000 walls in over 70 countries, each one created by the local community and passers-by sharing their deepest desires and ambitions. Chang also set up a Before I Die website where you can find out more and see what people wrote. 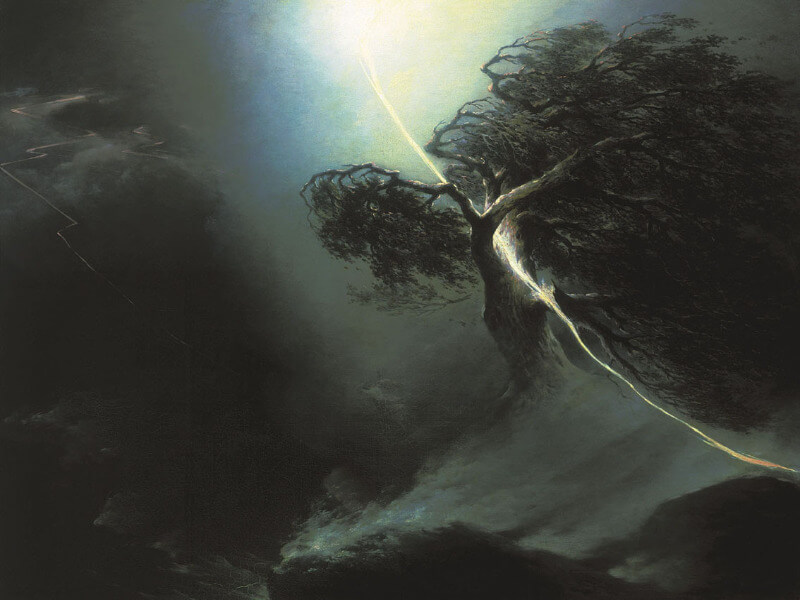 Russian painter Maxim Vorobiev specialised in painting landscapes. Most of his work depicts picturesque seascapes and peaceful countryside views, but this painting is markedly different.

An allegory on his wife’s death, this emotionally-charged picture captures the shock and pain of losing a loved one. A bright bolt of lightning streaks down from the stormy skies, breaking an old oak tree in two – it is perhaps the perfect metaphor for the sudden death of someone you love. 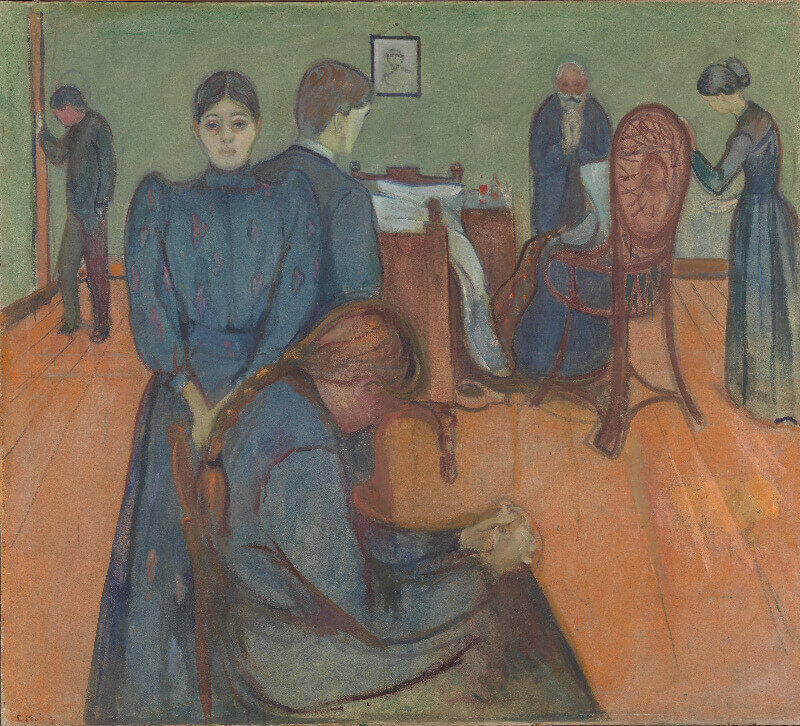 Edvard Munch’s work touched on many different themes and emotions, but he is particularly well-known for capturing the intensity and pain of raw human emotion, such as in his most famous work, ‘The Scream’.

‘Death in the Sickroom’ portrays the death of his beloved sister, Sophie. The figures in the painting seem disconnected from each other, no two making eye contact or touching, each one lost in their own grief.

This Japanese artist painstakingly creates installation artwork out of salt, in honour of his sister who died aged 24 of brain cancer. His intricate works use between 400 pounds to seven tons of table salt each, arranged in various patterns resembling lace, sea foam, or blood vessels.

At the end of every exhibition, Yamamoto invites people to scoop up handfuls of the salt and take it back to the sea, returning it to where it came from. The whole artistic process has helped heal his grief he says, explaining: “It’s a rebirth. It’s about connecting the people and the ocean and continuing the process of healing.” 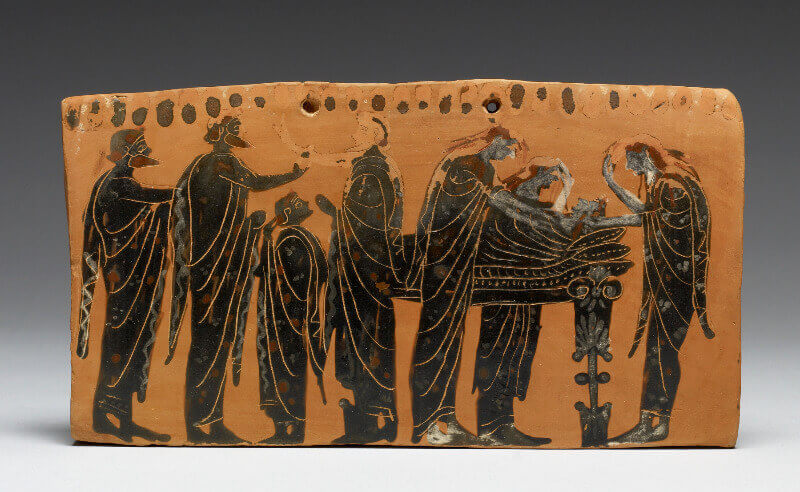 A pinax is a plaque, usually made of terracotta, wood or stone. These artworks, popular in Ancient Greece, were hung on walls in places of worship as offerings. This pinax is by an artist known as the Gela Painter, real name unknown, and shows a funeral scene in which mourners are gathered around the person who has died.

Despite the relative simplicity of the figures depicted, their grief is still evident. Bending over their loved one, they tear out their hair and shield their faces in despair. 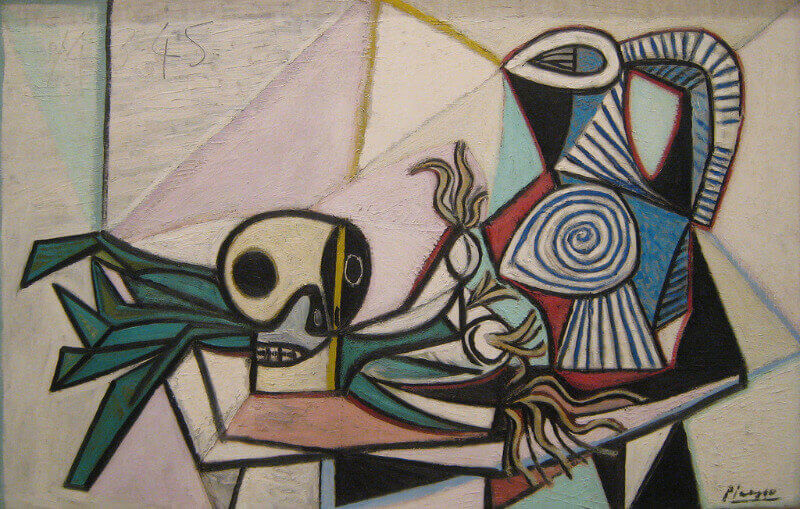 Painted in Picasso’s distinctive Cubist style, this still life draws on the centuries-old artistic traditions of memento mori and vanitas – paintings that showed the transience of life and inevitability of death by placing ordinary, everyday objects alongside a symbol of mortality, such as a skull.

Critics believe that Picasso was particularly preoccupied by this type of art in the wake of World War Two, during which so many people lost their lives. Like 17th Century Vanitas paintings, Picasso’s artwork invites viewers to think about where death fits into our daily existence.

8. ‘Monastery Cemetery in the Snow’ by Caspar David Friedrich, 1819 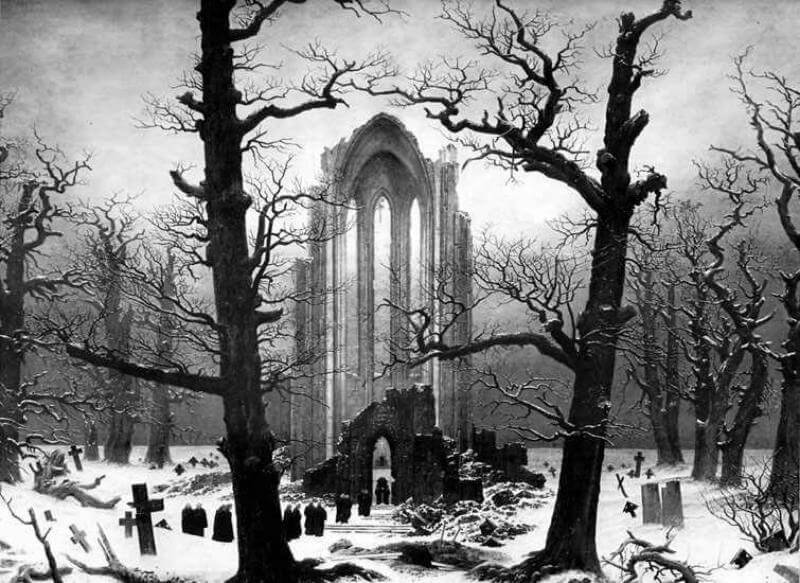 A German Romantic painter, Friedrich painted huge, impressive landscapes, from vast oceans to towering mountain ranges, inhabited by small, insignificant human figures. Almost all these works deal with man’s place in nature and our helplessness in the face of its power, but this painting particularly evokes themes of time and mortality, through the ruined abbey and scattered headstones, stark against the white snow.

Poignantly, ‘Monastery Cemetery in the Snow’, like the mighty abbey it depicts, has been lost to time and destruction. The original painting was lost during the air-raids of World War Two and only a black-and-white photograph of it remains. 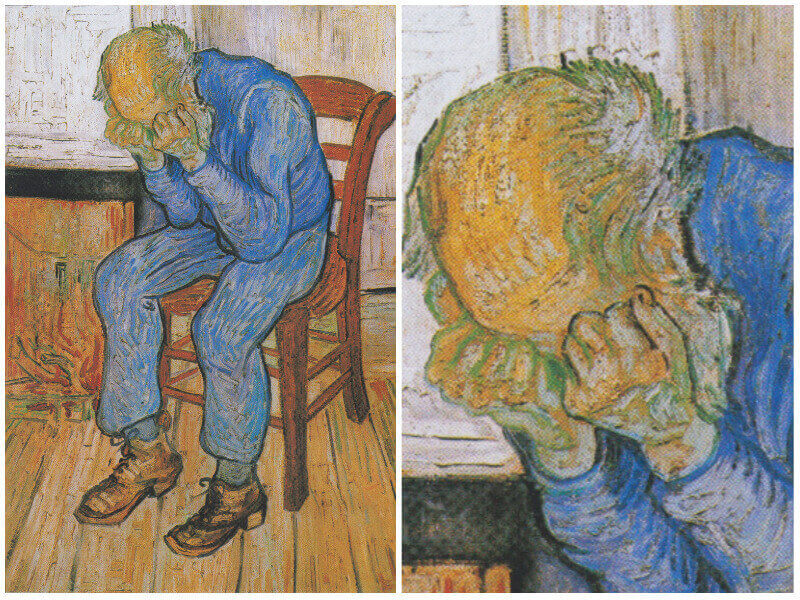 Van Gogh reworked this image several times in his life, based on a series of sketches he made of war veteran Adrianus Jacobus Zuyderland. Van Gogh said that the sight of the old man had moved him to think about life, death, and if there was some higher power.

Writing in his diary, he described the sight of the grieving old man as proof of the existence of “something on high”, calling it “unutterably moving” to see him bent double in sadness and grief. 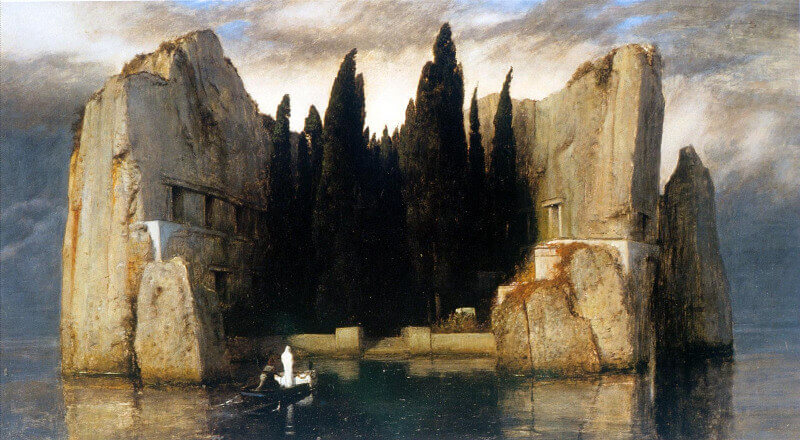 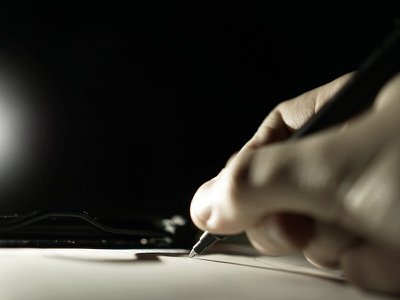 Dear Annie: What should I write in a sympathy card?

If you’ve lost someone close to you, or been affected by a bereavement, psychotherapist Annie Broadbent is here to help 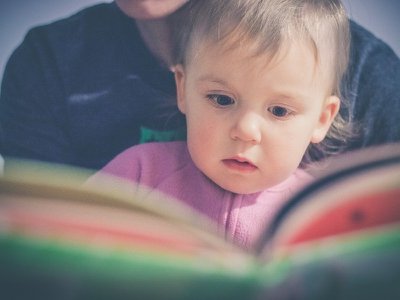 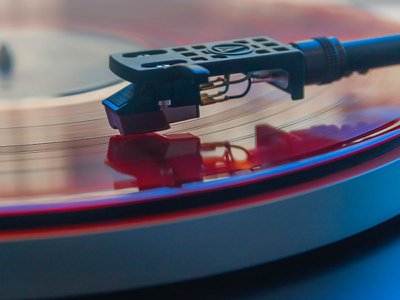 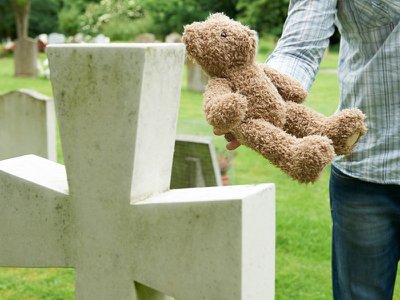