What Is Danse Macabre 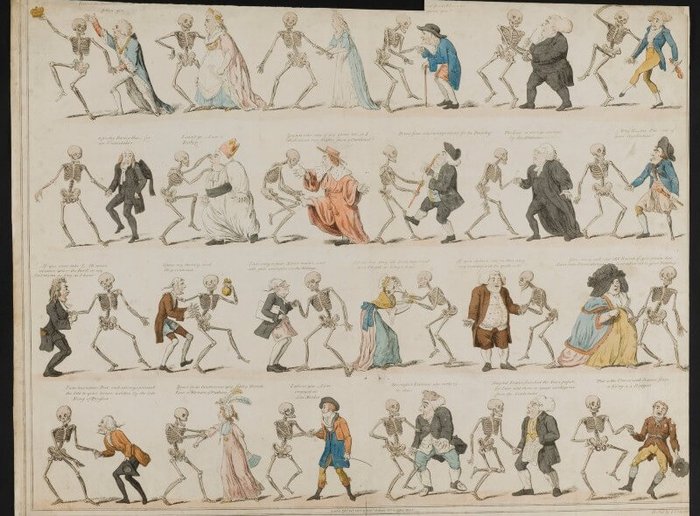 This guide explains the meaning of Danse Macabre, or the Dance of Death and the many different depictions of it across the centuries. Danse Macabre is a motif that was very popular in the Middle Ages, but it has continued to influence art, from paintings and carvings to classical symphonies, experimental dance films and graphic novels, for centuries.

What is medieval Danse Macabre?

The original meaning of Danse Macabre was a warning to sinners, but in the 14th and 15th centuries it became a fatalistic response to the endless death caused by the epidemic of bubonic plague, commonly called the Black Death, which swept through western Europe and killed 30-60% of the population.

Image by National Library of Slovenia on Wikimedia Commons.

Medieval societies were very hierarchical and, although terrifying, the equalising effect of death was not lost on artists and writers. The motif remained popular even after the end of the plague. Many depictions of Danse Macabre feature people from different social stations, from kings to knights, priests, peasants and hermits performing an actual dance of death with a group of skeletons. Similar illustrations also appeared on friezes and carvings in churches from the period. 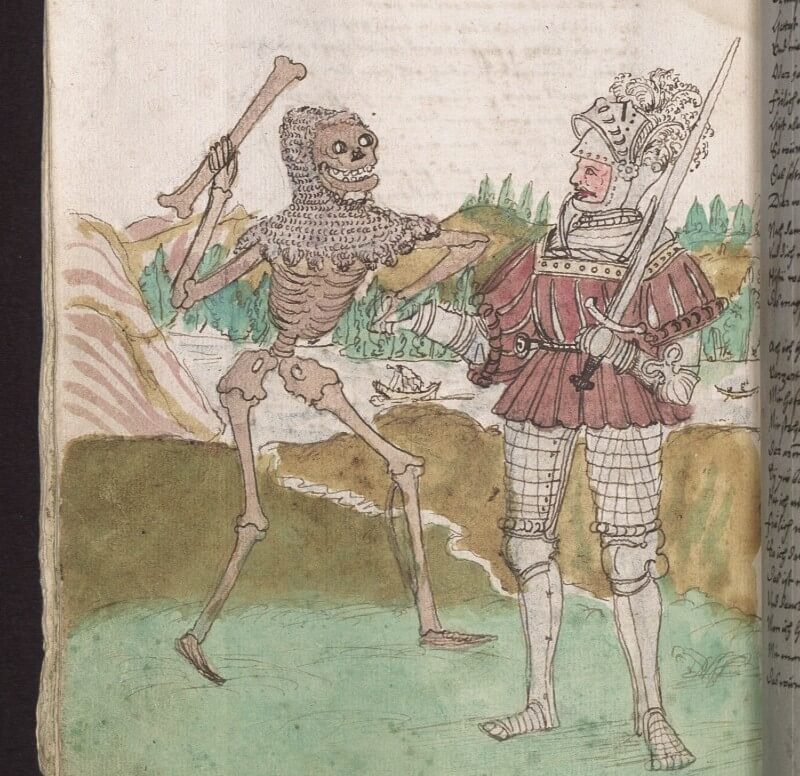 In Germany, totentanz (death dance) was a particularly popular genre of art and produced the sub-genre of 'Death and the Maiden' developed. 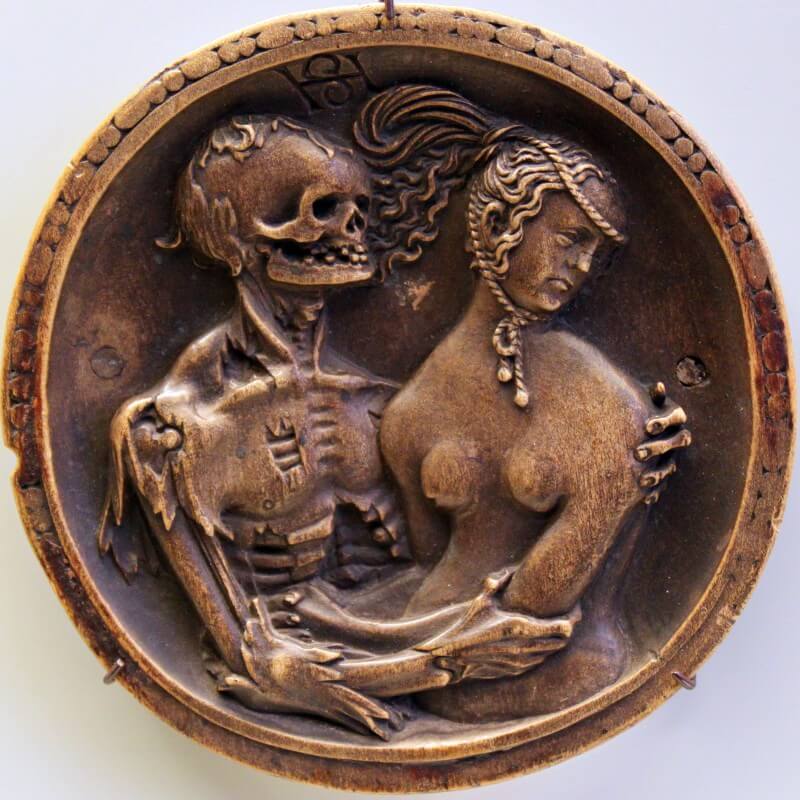 Photo by Anagoria on Wikimedia Commons.

Detailed descriptions of death were common in songs, poetry and plays. On the stage ‘Death’ was a protagonist who interacted with other characters.

One of the most famous examples of Danse Macabre in secular art are the woodcut prints by the 16th century German artist Hans Holbein the Younger.

What is modern Danse Macabre?

The modern meaning of Danse Macabre is quite similar to the original meaing of it, although it is generally treated as a source of artistic ispiration for artists and musicians, rather than as serious spiritual guidance. In the 18th and 19th centuries writers and illustrators often featured this unwelcome visitor surprising other characters. 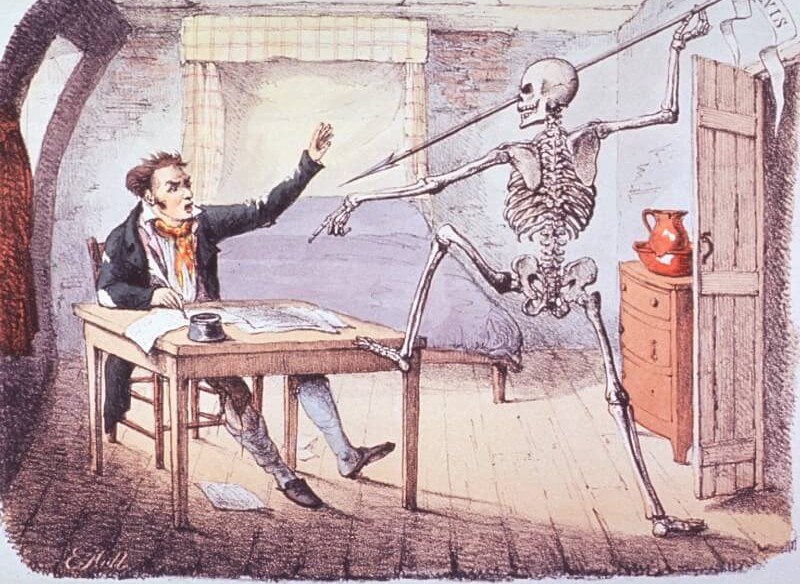 Photo by Joel on Wikimedia Commons

The ‘dance of death’ remains a popular concept for many artists, from orchestral symphonies and heavy metal and rock songs to experimental dance films and fantasy novels. 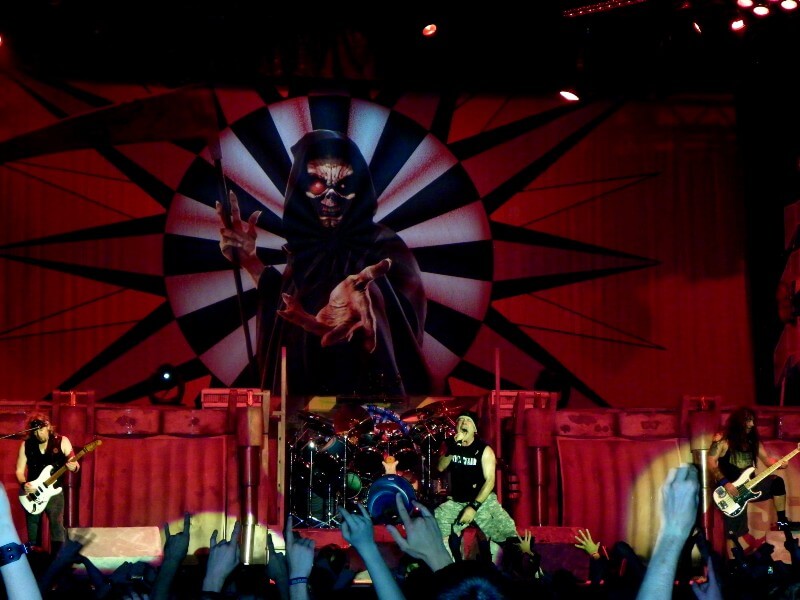 Death has featured as a character in the works of writers as diverse as Sir Arthur C. Clarke (Death and the Senator) and Sir Terry Pratchett (Discworld). In 1981 Stephen King published a non-fiction history of horror writing under the title Danse Macabre.

This list is a guide to some of the most famous references to Danse Macabre in modern culture.

The Hungarian pianist and composer Franz Liszt was fascinated by death and Totentanz, a symphony for orchestra and piano, was his grandest exploration of the subject. Although composed in the 1850s, it was inspired by the 13th century chant, Dies irae (Day of Wrath).

Songs and Dances of Death is a cycle of four songs for voice and piano in which death is a character, who appears as a babysitter rocking a child to ‘sleep,’ a lover waiting for a dying woman, a dancer who parties with a peasant, and a general leading an army.

Saint-Saëns, a French composer, produced this symphonic poem in the 1870s. The violins represent the character of death. In the 1980s a popular animated version was also broadcast on PBS in the United States.

The piece is one of the most popular representations of death in the history of music.

This experimental silent dance film features the characters of Youth and Love trying to escape the clutches of Death after Spain is ravaged by the Black Death.

Although the original cut of the film was silent, Murphy specified that cinemas accompanied it with a recording of Saint-Saëns’s Danse Macabre.

This short, little known piece by Britain’s most successful composer, is a setting for poems by W.H Auden and Randall Swingler about the Spanish Civil War (1936-1939).

The second movement, “Dance of Death” depicts the violence of the fighting.

This piece was premiered at Leningrad (Saint Petersburg) in 1944, after the end of the Nazi siege on the city. Millions of people were killed during the siege, but the piece was actually inspired by the composer’s personal grief for the death of his close friend, Ivan Invanovich. The 4th movement is called “The Dance of Death.”

Danse Macabre is a trade-paperback collection of comics in the Marquis series illustrated by Guy Davis and published by Oni Press.

In this series Vol de Galle, a former Inquisitor for the ‘Church’ of ‘Venisalle’, a republic based on 18th century France, has the ability to see demons disguised as humans.

The 13th studio album by Iron Maiden, the English heavy metal band, is called Dance of Death. The tracks are inspired by historical events associated with death, from the Albigensian Crusade (1244) to the Battle of Passchendaele (1917) and the Iraq War (2003).

The title track is a story of a man who ‘danced and pranced’ with the ‘undead’ after stumbling on a party of them during a walk in the Florida Everglades.

In 2018 the Swedish rock band, Ghost, featured a song called Dance Macabre on their third album, Prequelle, inspired by both the Black Death and Saint-Saëns’ composition.