What is a multi-faith funeral? 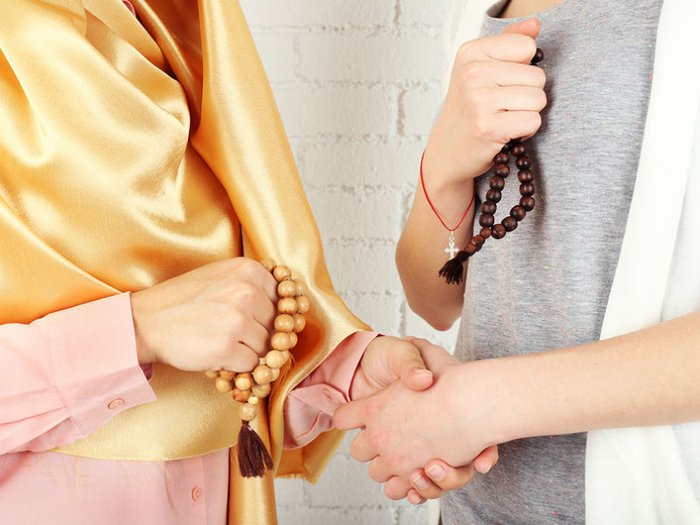 Once traditional Christian ceremonies were the norm for funerals in the UK, but with an increasingly multicultural society in modern Britain, we’re starting to see changes in what is expected from a funeral service.

Apart from the rise in non-Christian beliefs, such as Islam, Hinduism and Sikhism, many people now come from a diverse background with several different faiths and belief systems in their lives. This means that when it comes to paying tribute to them, a single faith ceremony might not be representative of their religious background.

Multi-faith funerals, also sometimes called interfaith funerals, incorporate elements of different religions and belief systems into the service. The idea recently gained some publicity after international sports icon Muhammad Ali planned a multi-faith funeral for himself. Ali carefully planned every detail of his funeral and decided to include ministers from several different faiths. Representatives of Judaism, Islam, Christianity and Buddhism were all part of the service, reflecting Ali’s respect for all beliefs and cultures.

Why choose a multi-faith funeral?

When arranging a funeral, the beliefs of the person who has died are usually the main factor in deciding whether or not to have a religious service. If they were devout followers of a specific religion or branch of a religion, they would probably wish to be buried or cremated in accordance with those traditions.

However, if that person was from a diverse background, they may have grown up with two or more religions shaping their beliefs. For example, if your loved one had a Christian mother and Hindu father, it is possible that they felt equal admiration and devotion to each religion. You could combine Christian and Hindu traditions in a multi-faith service to pay tribute to both important cultural and spiritual influences.

Your loved one may have been agnostic, meaning they did not particularly follow one religion and were not sure of their personal beliefs about god. However, if they grew up in a Christian household, they may still feel a connection with some Christian teachings. You could have a largely secular funeral, with one or two prayers or readings from the Bible.

Other people describe themselves as spiritual, and believe in faith and a higher power without necessarily following strict religious teachings. You could choose readings and traditions from many different religions, for example Buddhism, Paganism and Christianity.

With a multi-faith funeral, you can combine any readings, prayers or traditions to create a unique service that recognises all the spiritual influences in a person’s life.

Who can conduct a multi-faith funeral?

Religious funerals are often led by a religious leader, such as a rabbi, priest or imam. When it comes to multi-faith funerals, some religious leaders will be open to participating in a service with other religions represented.

Others will not feel comfortable doing this and may refuse. It can depend on the branch of the religion, the customs of that specific place of worship and the personal choice of that specific minister. If in doubt, speaker to the minister directly.

Another option is a civil celebrant. Although civil celebrants do not belong to any particular religion, they are normally happy to include various religious elements in the funeral service. They can work with you to design a service that properly reflects the spiritual influences of your loved one.

OneSpirit Interfaith Foundation can provide specially-trained interfaith celebrants who are similar to civil celebrants, but specialise in the needs of families with several faiths and beliefs.

Of course, anyone can conduct a funeral service so you could conduct it yourself, perhaps together with other friends and family members.

Many funeral directors can cater to multi-faith funerals. Contact a funeral director today to talk about your loved one’s funeral, or read about the funeral traditions of different religions.