Why are tiny baby clothes being hung out in UK streets today? 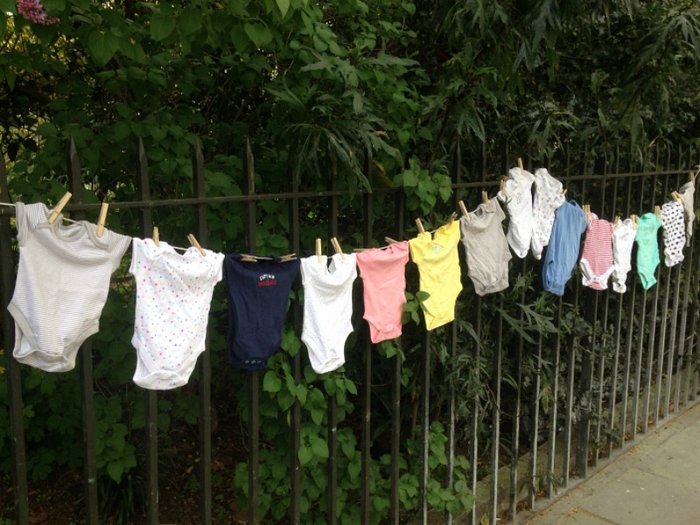 Tiny baby clothes are being pegged out in landmark locations across the UK today, as a heartrending reminder of thousands of newborns who die every year.

Sands, the charity which supports bereaved parents whose babies are stillborn, or die shortly after birth, is raising awareness of the many longed-for babies that die prematurely every day in the UK.

The charity is touring Edinburgh, Cardiff and Belfast with 15 little babygrows pegged out on washing lines and will be visiting 15 locations across London. The touching display is a poignant part of the charity’s month-long campaign, Sands Awareness Month, highlighting the pain endured by families who lose babies.

Sadly, the death of a baby is not a rare tragedy. According to Sands, around 15 babies die before, during or soon after birth every day in the UK. Throughout June, the charity, which is also behind research into preventing baby deaths, is encouraging the public to speak more openly about baby death and support its #15babiesaday campaign on social media

The charity warns that although the number of infant deaths has fallen in recent years, the UK is moving “three times slower” than some other European countries to reduce the rate of baby deaths. It says that many families are too often sent home from hospital with “poor explanations” for their baby’s death and that greater investigation is needed to help identify and prevent the causes.

Sands chief executive Dr Clea Harmer said: “The aim of #15babiesaday is to not only highlight the unacceptable fact that 15 babies die before, during and shortly after birth every day in the UK, but also to encourage the public to talk about baby death, which is often a taboo subject.

“I hope that the washing lines containing 15 babygrows that will be seen in many prominent locations across the UK, will help provoke debate and discussion as to why so many babies die and what can be done to reduce this number. We are determined to ensure that every bereaved parent gets the care and support they need and deserve.”

The Royal College of Midwives said that midwives are supporting #15babiesaday. Its director of midwifery, Louise Silverton, said: “We believe that it is crucial to work together to reduce antenatal stillbirths and avoidable baby deaths.

“We also must ensure that there are enough bereavement midwives in place to ensure that parents and families get the support they need.”

As part of its #15babiesaday campaign, Sands is publishing 15 blogs written by bereaved mums, dads and grandparents throughout June. They each tell their own story about the precious babies they lost and how the charity supported them through their grief.

Derek, whose daughter Ruby died 23 weeks into her mum Liz’s pregnancy, wrote: “I grieve not only for her, but the potential of all she could have been.”

You can read Derek’s story and other moving personal accounts as they are published throughout Sands Awareness Month on the charity’s 15 Perspectives blog.

To help fund its support and research, Sands is asking people to use the number 15 as the theme for a charity challenge, to help it raise £15,000 during its #15babiesaday campaign and Sands Awareness Month. One challenge taking place will see 170 intrepid supporters climb Pen Y Fan mountain in the Brecon Beacons. They’ll be taking the Sands washing line display to the summit on June 24.

Download 15 themed fundraising ideas to inspire your own charity challenge for Sands.

Where will Sands #15babiesaday be visiting today?