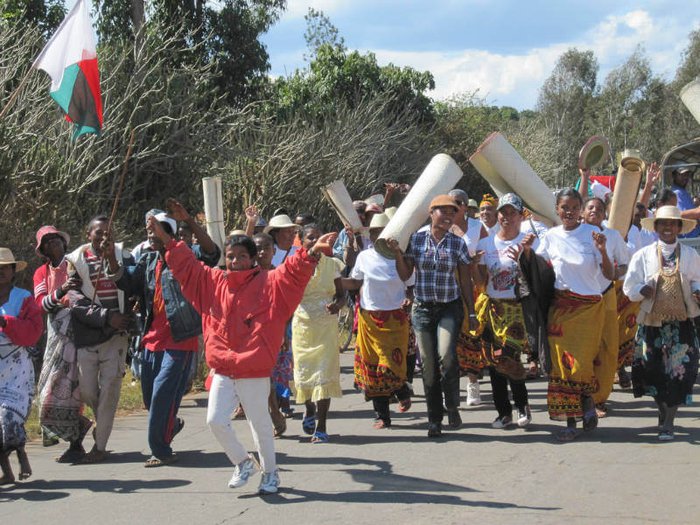 In most Western and European traditions, once a person dies, it is believed that their soul has departed. However, for the Malagasy people of Madagascar, the spirit can only travel into the afterlife when their body has fully rejoined the earth and their bones have turned to dust.

The Malagasy are the dominant ethnic group on the African island of Madagascar, comprising the vast majority of the population. They are sometimes divided into ‘Highlander’ and ‘coastal dwellers’ groups, with many different ancestral tribes and communities.

What death rituals are followed in Madagascar? 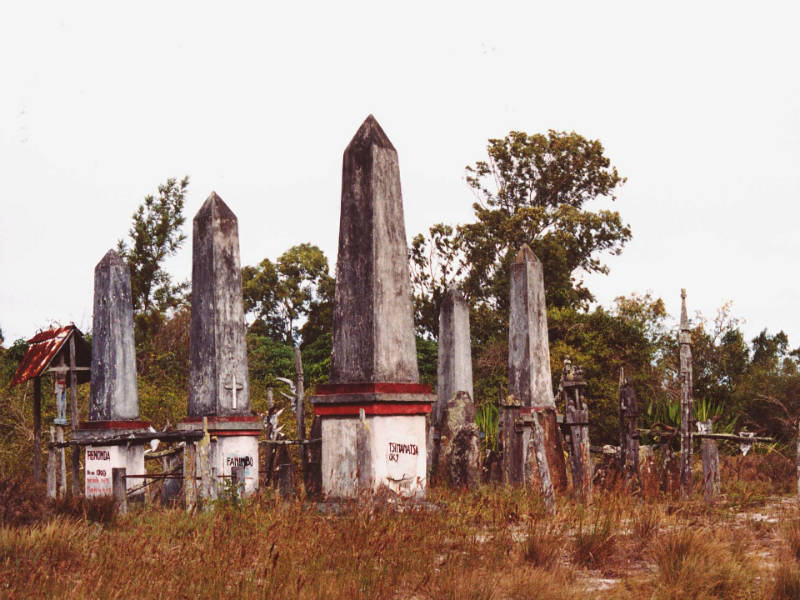 A traditional Madagascan graveyard. Photo by Moongateclimber via Wikimedia Commons.

It is a common belief in Malagasy culture that the spirit does not immediately depart after death. So long as the body remains, the spirit is still part of this world. Accordingly, Malagasy families must care for their loved ones and ancestors until they can pass into the afterlife, when their body has rejoined the earth. 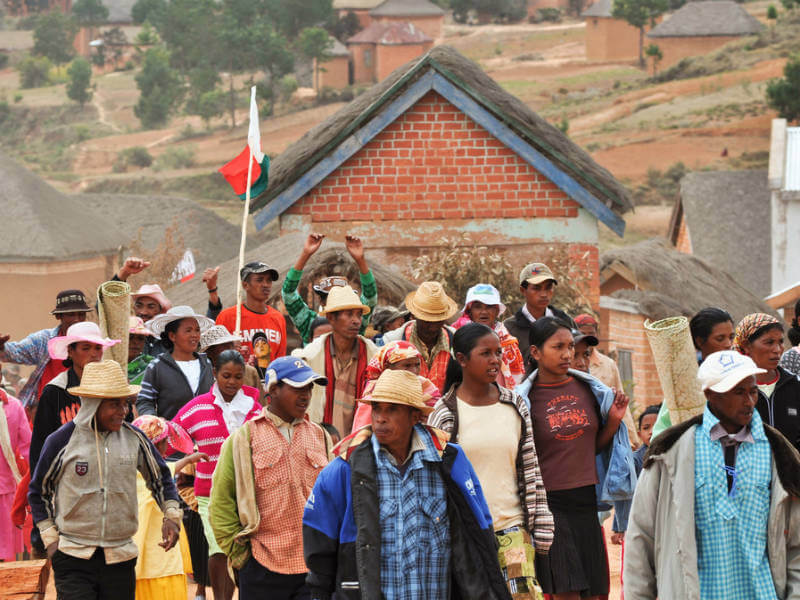 Villagers prepare to make the journey to their family tombs. Photo by Henry Zo Rakotondramanana via Flickr.

For a long time after death, sometimes generations, loved ones must still be honoured and cared for. And for the Malagasy people, this means throwing a huge celebration to honour their dead known as Famadihana. It is an occasion to give ancestors the love, attention and care they need, until they are able to continue their spiritual journey.

Culturally, Famadihana is an extremely important death ritual. Family members can travel for days on foot to their ancestral family crypt or grave, where the ceremony will take place. Often the whole village or community will perform Famadihana at the same time.

What is the turning of the bones?

Famadihana is also known as the turning of the bones and is often compared to the Torajan festival of Ma’Nene.

During the ceremony, loved ones’ graves are exhumed and the bodies are carefully wrapped in special straw mats. A procession will then take place, with families carrying their loved ones above their heads back to the village or a special place where the ceremony continues. 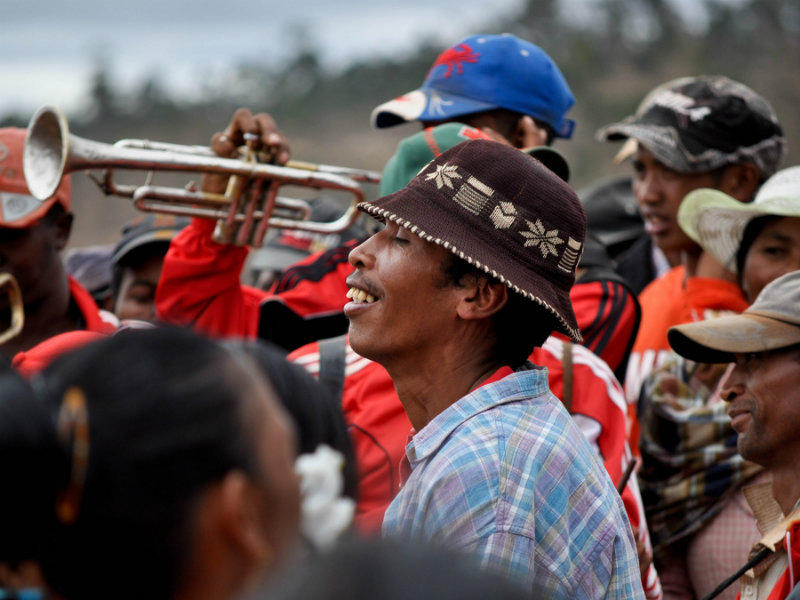 The turning of the bones is a celebration, with music and dancing. Photo by Henry Zo Rakotondramanana via Flickr.

The bodies of the ancestors and loved ones are gently laid out, usually side-by-side on the ground. They are cleaned and dressed in fresh burial shrouds, traditionally made of fine silk, which can be of great expense to the family.

During this ceremony, family members may ask their ancestors for blessings, share family news with them, or tell stories about their life. The spirits of ancestors are revered in Malagasy culture and it is believed that they can help to protect and bless the family, if properly cared for. For example, women who are struggling to conceive a child may take fragments of their ancestors’ old burial shrouds during Famadihana, in order to place them under their mattress as a kind of blessing or good luck token.

Once the ancestors have been cared for and dressed, a huge feast is held in their honour. The turning of the bones festival is more like a family reunion than a funeral, and it is believed that the spirits of those who have died love a good party just as much as the living.

There will be plenty of food, live music and dancing. Sometimes families will even dance with the bodies of their ancestors, in a joyous celebration of the people they love. 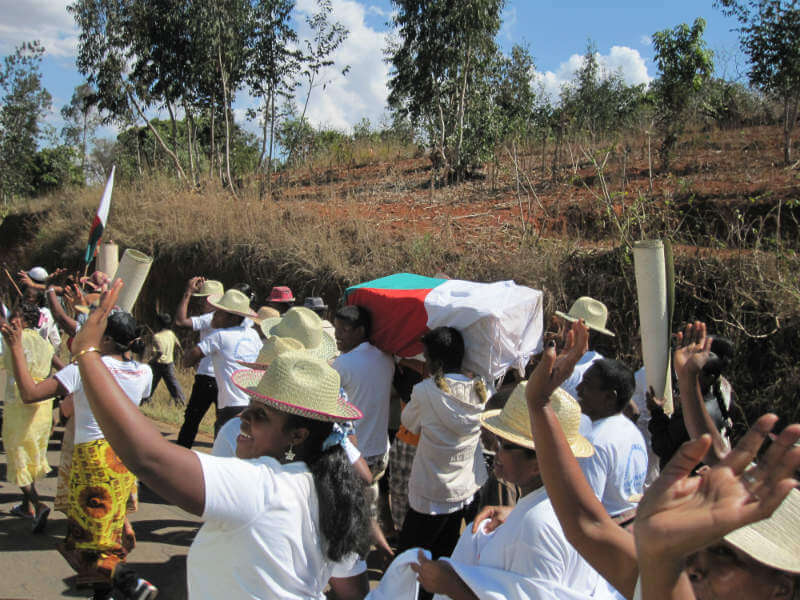 The Famadihana procession is often joyful and lively. Photo by NH53 via Flickr.

How long does Famadihana last and what happens after?

Famadihana can last two days. When the festival comes to an end, the ancestors are returned to the family tomb, along with gifts, money and alcohol to keep them well looked-after until the next turning of the bones. The tomb is closed and the family may take a few moments to reflect peacefully after the busy celebrations of the previous days.

Traditionally, Famadihana was one of the most significant community death rituals in Madagascar, and an integral part of people’s spiritual beliefs. The practice is now in decline, partly because of opposition from some Christian organisations, and partly because of the enormous expense of the celebrations.

Although a traditional turning of the bones seems entirely at odds with Western views on death, perhaps there is something to be learned from Malagasy people. Rather than pressuring themselves to ‘move on’ from grief, they instead embrace the idea that the people we love will always be an important part of our lives.