Death around the world: Cremation ceremonies in Bali 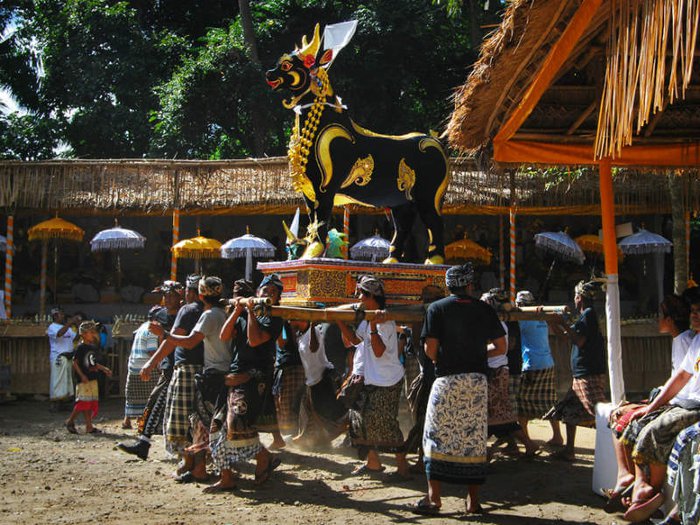 A decorative ox-shaped coffin, called a Lembu, is taken to the site of the cremation in a funeral procession. Photo by William Cho.

Known as the ‘land of 10,000 temples’, all aspects of life on the Indonesian island of Bali are influenced by spirituality. Colourful, elaborate ceremonies are regular occurences in towns and villages across the island, but none more breath-taking than Ngaben, the Balinese cremation ritual.

The majority of Bali's population follows Hinduism. Hinduism teaches that life is a cycle of birth, death and rebirth, which can only be broken when the soul is pure enough to be reunited with the gods. In order to be reincarnated into a new body, the soul must be released through the cleansing fire of a cremation.

Ngaben literally means ‘turning into ash’. This lavish and expensive ritual is thought to guide the spirit into its next life and is considered a celebration. The Ngaben processions are often colourful, noisy and not at all sombre. 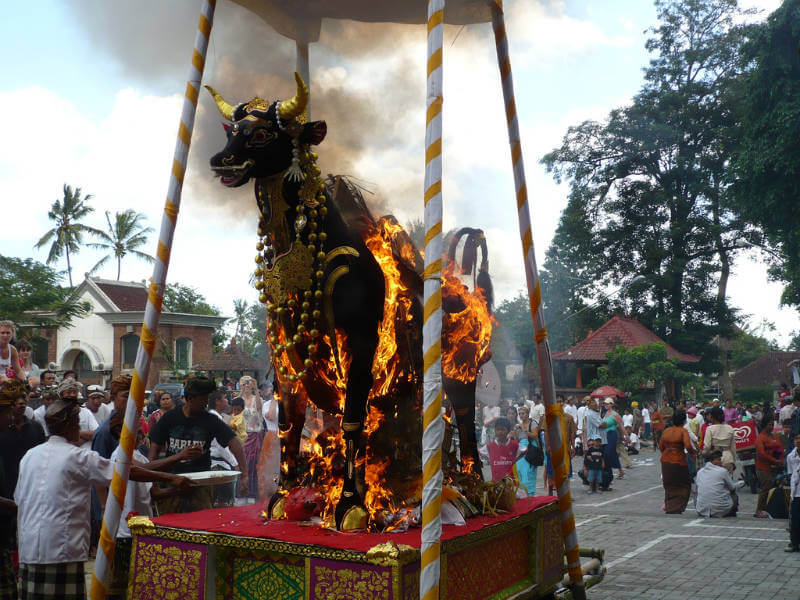 The colourful Lembu is cremated so that the soul of the person who has died can be released. Photo by Kibitan.

The day for the ceremonial cremation is chosen by a priest, according to the Balinese calendar. It can take families a while to save up for the elaborate arrangements, and so the person may have died months or even years before.

Two very important elements of Ngaben are the Waddhu and the Lembu. The Waddhu, also sometimes called the Bade, is a ceremonial tower of multiple levels, made from bamboo, wood and paper. The more important the person who died, the more levels the Waddhu will have. These towers are often brightly coloured with fantastic designs. They are carried during the funeral procession and turned around multiple times to discourage the spirit from lingering.

The Lembu, meaning ox, is the coffin containing the person who has died. The coffin is often shaped to look like an ox or other animal. It will also be carried during the procession and burned along with the Waddhu.

Apart from the symbolic tower and special coffin, the family of the person who died may also hire a Gamelan. The word Gamelan is a Javanese word meaning ‘strike with a hammer’, and refers to an orchestra of percussion instruments, often used in religious rituals. The Gamelan will accompany the funeral procession, contributing to the noisy, festival-like atmosphere. 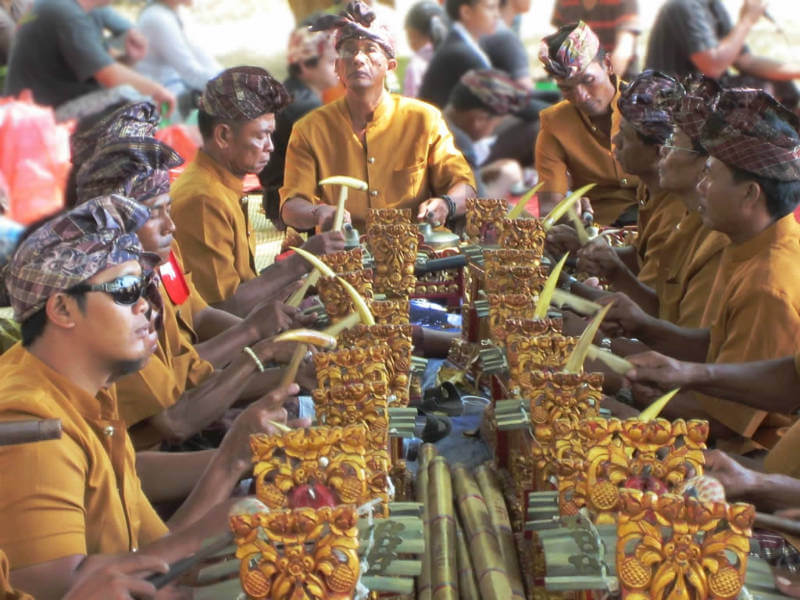 A Gamelan orchestra accompanies the funeral ceremony with the sound of percussion music. Photo by David Stanley.

Once the procession reaches the place for the cremation, a priest will light the fire to burn the Lembu and the Waddhu. Often mourners will take this time to reflect in peace and watch the cremation. Afterwards they will share food and drink.

The ashes from the cremation will be scattered in the sea. In the 12 days after the Ngaben, the family will build and burn effigies of the person who has died and also scatter these ashes in the ocean.

The upper classes and royalty of Balinese society do not have Ngaben. Upper class funerals are called Pelebon and are even grander and more extravagant. The Waddhu will have nine floors to signify their high status, and will take many hours of expert craftsmanship to build before being engulfed in flames. 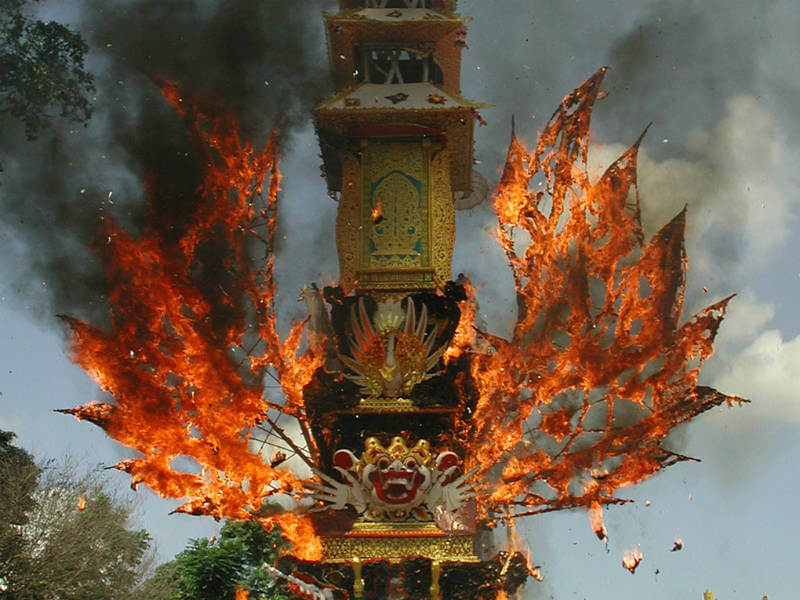 A decorative symbolic tower, known as a Waddhu, is ceremonially burned during the ritual of Ngaben.

The festival of Galungan

Like many cultures across the world, Balinese Hindus have a special festival each year during which they remember loved ones and ancestors who have died. In Bali this is called Galungan, when the spirits of the dead are believed to return to earth to visit ancestral homes.

The date of Galungan depends on the 210-day traditional Balinese calendar. This means that in 2017 there will be two Galungan festivals in one year.

During the festival, each household will erect a bamboo pole called a Penjor outside by the side of the road. Each pole has offerings laid out at its base and often has intricate decorations on the end. 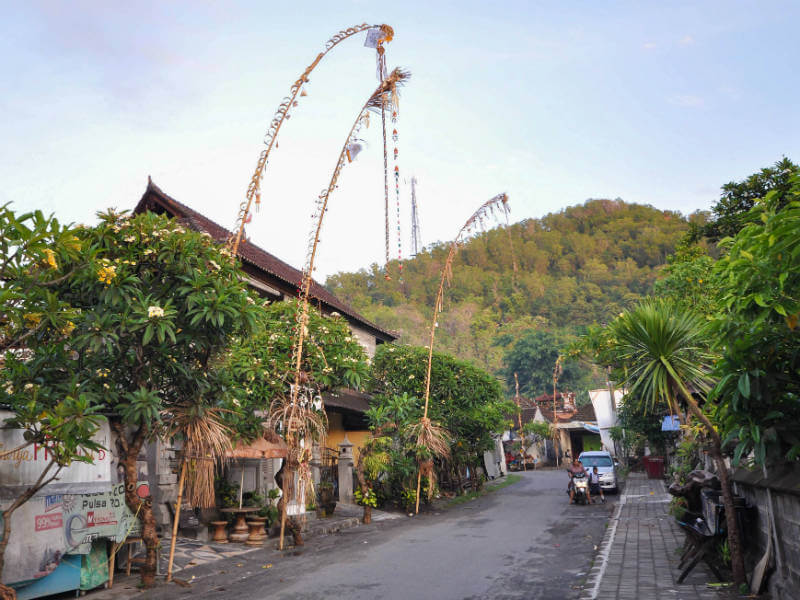 These tall decorations are known as Penjor. Erected outside each family home, they mark where offerings are left for spirits.

There are also various rituals and traditions throughout the festival on special days. Three days before Galungan, followers will give cooked bananas as offerings. The following day they will make Jaja, a type of fried rice cake, to offer as well. One day before, animals, usually pigs, will be slaughtered for the Galungan feast.

10 days after Galungan, the festival concludes with a day known as Kuningan, when the ancestors are said to return to the afterlife again. Galungan is then complete and the penjors are taken down until the next time the spirits of the dead come to visit.