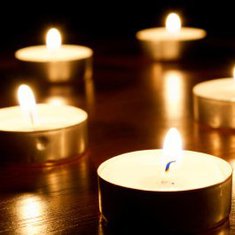 Donate in memory of
JoanParkinson’s UK

Dear Joan, sorry no fresh daffodils for your funeral but I did say you would have to choose the right month to leave us, which we both laughed about at the time. However, June came good again with silk ones. RIP. Lots of love Dee. Xx

Eulogy
Joan was born on the 16th of November 1929 to Tilly and Fred Rainbird. She was an only child, who was brought up on the glamour of Hollywood, and whose favourite film was Gone with the Wind. And like the film stars she had different names so some of you will know her as Joan, others Joanne and latterly Jo. Today I'll call her Joan but please remember her as you knew her.

When she married Lol, she treasured the relationships with her new extended family: Jim, Tom & Vi, Alf and Doll, Marie & Brian, Pat & Ken. With the passing of wonderful Pat this month, the ultimate gentleman Ken is the last survivor of the Smith siblings and their spouses. But they live on through Terry & Tony's cousins and their families.

Joan was a Townie who struggled with all the bugs, spiders and mice when the family went hop picking. Fortunately, this piece of family history was never lost to all the cousins as they were subjected to the same stories about hop picking in Kent whenever the family got together.

Joan was a strong, passionate character. In her mind she wasn't better than anyone else and neither was anyone better than her. Tony remembers her losing her temper and shouting at him when he did something wrong and then 2 minutes later saying: "do you want a cup of tea love" But Lol had her measure. When she threatened to leave him, he said “do you want some money for the bus fare” Then they both laughed.

Joan was always laughing and loved to party.

At Auntie Pat's recent funeral many of her nephews and nieces said how caring and how much fun Aunty Joan was. They particularly remembered the New Year's Eve parties at Devonshire Avenue. And Joan used to love the annual trip to the Talk of the Town in London hosted by Uncle Jim.

When Lol died too early, aged only 54, Joan moved to Brighton where Tony's friends nicknamed her "Danger Mum" for her partying abilities. She really loved Brighton, especially when her grandkids Alex and Nick came to stay with her.

Joan often made everyone laugh with her scatter-brained memory and random hearing. She once asked her grandkids Emily and Luke to help her remember the name of the nut often found in cakes beginning with the letter F. Her answer was Pecan. When Terry told her he was going to Tobago Keys, she told Tony that he was in Tampeco Bay. She thought that King Arthur’s wizard Merlin was called Bernie. She used to call Helen's dad Graham despite his name being Raymond. And on each of these occasions she was convinced that she was 100% correct. Meanwhile to save her having to distinguish between them Terry & Tony were each known as “Terrytony”

Joan's first job was with the Iranian oil company where she met June in 1952. June was to be a lifelong friend not only to Joan, but to Terry and Tony

If she didn't like a job or the way she was treated she would give them a piece of her mind and then walk out.

Joan had a passion for the disadvantaged, those down on their luck and those who experienced addiction. She was very active in the Pentecostal Church. The turning point was when Billy Graham the American evangelist came to London in 1966, after which she dragged June to the local Pentecostal Church where she became a born-again Christian.

It was at the Pentecostal Church that she met so many lovely people including the Hyde family Doreen & Stan, Joan and Val. She loved to visit them down in Devon over the years.
Joan's jobs included:
Carer for Downs syndrome children
Auxiliary nurse
Home help
Sunday school superintendent
Volunteer worker for her homeless charity in Brighton... she called them "her" homeless.

During her lifetime she had some brilliant friends and towards the end she was looked after by the wonderful carers from Westminster care. There are far too many special people in Joan’s life to mention by name, but you know who you are. Thank you for your friendship.
Joan Smith. You may remember her as a passionate, volatile, caring, scatter-brained, determined, strong-willed, funny ball of energy. To the grandkids she's Nan, Gran or Nansta. To “Terrytony” she's Mum. God bless you mum, we love you.