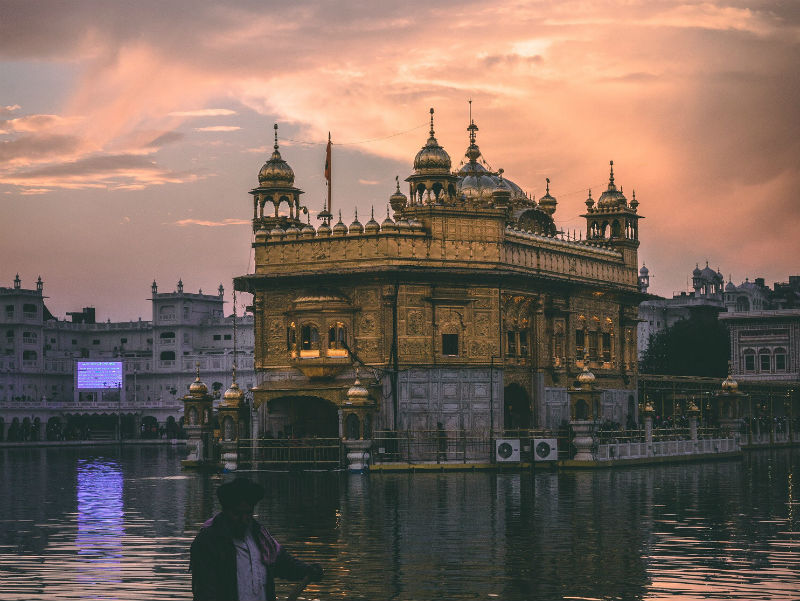 Photo by Raghu Nayyar on Unsplash

Sikhism believes in transmigration of the soul which never dies. However, the human life is an opportunity for the soul to break out of the cycle of transmigration (karma) to unite with Waheguru, the Wondrous Giver of Knowledge, the Sikh name for God. Such union takes place through good deeds, truthful conduct and Waheguru’s grace (nadar).

The Sikh funeral is known as Antam Sanskaar, meaning “the last rite of passage”. The focus of the funeral ceremony is not loss and grief, but celebration that the soul has an opportunity to re-join Waheguru.

Before a Sikh funeral

Arrangements for a Sikh funeral usually begin immediately after death. Many funeral directors are able to accommodate Sikh funeral traditions.

Before a Sikh funeral service, the body is bathed and dressed in clean clothing. The articles of Sikh faith, called the Kakaars, which the person would have worn during his or her life as an Amritdhari (initiated) Sikh, should not be taken off nor the hair cut or removed from any part of the body.

The articles of Sikh faith are kesh, unshorn hair, kangha, a small wooden comb, kachha (or kachhehra) shorts usually worn as an undergarment, karha, an iron bracelet, kirpan, a sword of unspecified length. If the person was not an Amritdhari Sikh during life, then the relatives would wish that these articles of faith are given and the hair left unshorn. The body may also be surrounded with flowers.

Depending on the customs of certain families, there may be an opportunity to see their loved one before the funeral. There may also be an open casket at a Sikh funeral.

Most Sikh funerals include the recital of Ardas, a community prayer, as well as two daily prayers, Japji and Kirtan Sohila. Services can take place at the home of the bereaved family, at the gurdwara, outdoors, or at the crematorium.

Sikh cremation can take place during day or night. Often the bereaved family, close relatives and friends will attend the actual cremation.

Ritualised mourning is not an accepted part of the Sikh funeral ceremony. You probably will not see overt public displays of grief, or ‘superstitious’ rituals such as lighting a candle to guide the soul. Only the Name of Waheguru is repeated by the congregation for comfort and peace of mind. The funeral service is designed to show that the mourners are resigned to God’s will, rather than focusing on their pain and grief.

Sikhism does, however, acknowledge that sadness is a part of a loved one dying, and supports private grieving and comforting others.

Cremation is preferred for Sikh funerals. In other parts of the world this is done with outdoor funeral pyres, but in the UK this is restricted to crematoria. Burial or any other means for disposing the body are acceptable if the circumstances do not allow for cremation.

After the cremation, the ashes are usually buried in the earth or scattered. Often Sikhs will scatter the ashes of their loved one in a body of flowing water, such as a river or the sea.

Sikhism does not approve the raising of monuments or placing stones in the name of the dead person to mark the site of cremation.

After a Sikh funeral

Sikhism does not subscribe to any mourning periods or mourning rituals after the death of a loved one. Starting on the day of death, the bereaved family will carry out a devotional reading of the entire Sri Guru Granth Sahib, the Sikh holy scripture. There is either a continuous reading of the Sri Guru Granth Sahib called the Akhand Paatth, which takes three days, or the reading is done over a number of days, usually 10 (recommended) or more depending on the convenience of the relatives and family circumstances. In either case, this can be done at the family home or the gurdwara.

Sometimes, if a Sikh funeral is delayed for any reason, such as due to a post mortem or availability of the crematorium, the completion ceremony of the reading of Sri Guru Granth Sahib (called Bhog paona) is done on the same day as the funeral, after the cremation.

If you are a non-Sikh attending a Sikh funeral, you will not usually be expected to participate in prayers and readings. Simply stay respectfully silent, and sit or stand when the rest of the congregation does so.

What to wear to a Sikh funeral

For a Sikh funeral, you should wear smart clothes in subdued colours, with no bright patterns. It is best to dress modestly, with not too much skin showing. Sikhs will always cover their heads at funeral. As a mark of respect you may be expected to do the same, with a cap or hat for men and headscarf for women. However, in some gurdwaras you will be provided with a head cloth or a scarf when attending a gurdwara ceremony.

Also bear in mind that when entering a gurdwara or the home of a Sikh, you will probably be expected to remove your shoes.

Further reading can be found via the Sikh Missionary Society, or you can read about other religious funerals.