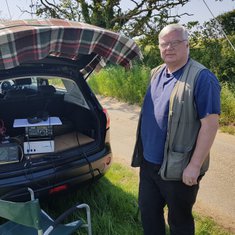 I first met Jeff nearly forty years ago when I used to help Nigel and Crosstalk move all the sound and lighting equipment all over the country to various gigs. I then watched him perform both with Crosstalk and as Don has mentioned in the production of “In the beginning”. I always saw him Physically as a giant of man and yet he seemed to have a very gentle singing voice! We lost touch until I recently met and chatted with him at Anne and Nigels wedding anniversary celebration. It was as if we saw each other only the previous week. Mary ,Ian and Tim...both Sherri and myself are so sorry for your loss . Clive Mackrow. X

I have known Mary and Jeff for many years since our children were young and have a photograph where our children were dedicated at Church along with the children of Ruth and Jerry Clewett and John and Penny Winter. Although I have not seen Jeff much over the past few years I am so glad that I saw him and Mary on a bus a few months ago and was able to talk to them. Also they came to Church a while ago and sat with me and it seemed like old times chatting and laughing with them again. My thoughts and prayers go out to all the family at this sad time.

I only met Jeff a few years ago, and this was mostly with requests for printing. I have hugely appreciated his cheerful responses, constructive comments and helpfulness.

My thoughts are very much with Mary, Tim and Ian and family, Jeff will be much missed

I only met Jeff a few years ago, and this was mostly with requests for printing. I have hugely appreciated his cheerful responses, constructive comments and helpfulness.

My thoughts are very much with Mary, Tim and Ian and family, Jeff will be much missed

Jeff was a kind, funny, clever man, good at his job and a great conversationalist. He will be greatly missed. I got to know Mary at those Friday nights at the Clewetts’- which the women continued long after the older children had grown up - and I first met Jeff and encountered his wit on an occasion when the husbands were there too. It turned out we had gone to the same school, much to his amusement since he went to a boys’ grammar - that later went co-ed. Jeff regularly printed newsletters for the church where I worked over several years, and produced various art projects for me. I learned that no typo would go unspotted, and no dubious spelling or punctuation would go unquestioned. I doubt Jeff ever printed a mistake! It was so sad to virtually attend his funeral today. My love and condolences to Mary, Tim, Ian and all the family. Philippa

I think I first met Jeff around 1980, and had a musical connection. We appeared in a production of Joseph at the church we attended, Jeff and I played two of the brothers. This followed two performances in 1982 and 1983 of another musical, this one written by Colin Waller.
I remember Jeff as being so welcoming and helpful with a fantastic sense of humour and was a great joy to be with. A very intelligent man, observant, kind and always seemed to know the right thing to say regardless of the situation. I look back on those times with very fond memories.
It came as such a shock to Fiona and I to hear that he had died so suddenly, but are grateful for having the opportunity to catch up with him and Mary at Anne and Nigels anniversary last summer.
Our love and prayers are with Mary Ian, Tim and all the family.

Will miss our chats, infrequent though they were in recent times.

My heart goes out to Mary, Ian and Tim at this very sad time. It’s never easy to lose someone you love and hold dear to you, but it’s especially difficult in the current situation.

I will always remember Jeff as being a kind, helpful and patient person. A genuinely nice man!

Safe journey Jeff, you leave behind lovely memories with your loved ones that will last a lifetime. Rest in peace.

Jeff, this was most definitely not Plan B! Having shared 40+ years of friendship with you discussing everything and anything I'm going to miss those great times. 'Articulate' and your frustration when I or whoever you were partnering with couldn't get who you were trying to describe. Tears of laughter would roll down our faces. Quiz nights in the village hall in Campsea Ashe and having you on our team was a godsend, I'd never heard of the Mariana Trench until then but you knew it straight away. As I mentioned in my eulogy at your service the great times and memories we shared will never be forgotten. The productions in the church and the weekends out with the band doing lighting will live with me forever and I remember that your favourite colour gel was Tokyo Blue on the Par Cans and the Ultra Violet on the moving heads. Great memories, great times, I shall miss you immensely.

This sudden and premature departure was not part of any of your plans we discussed at length in recent years. We were occasionally (verbal) sparring partners but we always knew we had each others' backs.

Just over a year ago you produced orders of service and message tags for my sister Ruth's memorial service and took such care with them, matching colours precisely to a special painting - such thoughtfulness and attention to detail.

I will miss your intelligence and thoughtfulness, your enthusiasm and quick wit.

Life is both precious and precarious. The whole world is aware of this at the moment. My friendship with you enhanced my life; I wish I'd taken the time to tell you that. I will miss you enormously.

I have many very fond memories of Jeff, mostly at Christmas time and mostly involving laughter over a highly competitive game of Trivial Pursuit or Articulate. He had an incredible ability to be pedantic about the rules, win the game on a technicality, but make the whole process funny whilst doing so. I learnt a lot from Jeff and always enjoyed his presence. In more recent years, my conversations with him have always revolved around my life and how I'm getting on. He genuinely cared and I'll miss him. My thoughts are with you Tim, Ian and Mary.

I too felt privileged to watch Jeff's funeral today. I didn't know him well - but put up quite a few of the posters he printed for church! I know how much he was loved and my thoughts and prayers are with you all.

I guess I first met Jeff around 1980 and at one of the rehearsals for a church musical I had one of my early memories of his dry wit. When sitting next to him and, realising how good a singer he was, I asked him (as I was a novice singer and not a very good one at that) how I could improve. After a few seconds of thinking he said 'mime'?! Over the years our main connections were perhaps on the Friday nights at our house that others have also mentioned, when Jeff would often come in late due his long working hours but then fill the room with his humour and intelligent conversation. Jeff will be missed by all who knew him. With love to Mary, Ian , Tim and the wider family.

I remember well Jeff's gentle unassuming manner. He once printed some lovely leaflets for a friend of mine selling hand made bags. When he delivered the leaflets with a smile, they were beautifully done at a low price and he added some extra free ones. He was a very kind, genuine and hard working man, who will be much missed. My love and condolences to all the family. xx

Watching the funeral today was deeply moving and I am still in tears. Jeff was simply part of the backcloth of my life in Newham, someone whose intelligence, remarkable knowledge, insight, wit and kindness I really appreciated. We shared a passion for ruby and saw some matches together. He and Mary were among the first people Debbie and I visited when we came to Newham. On Friday nights at the Clewett's I remember Nigel and Jeff having animated conversations about sound and lighting and things that lost everyone else. I also remember his ability to ask a really searching and intelligent question that made you think more carefully and deeply about life. The landscape of our lives has changes and we are all the richer for knowing him. I am so sorry that we can't all be together on a day like today but it was very good to see the video link. Thank you. 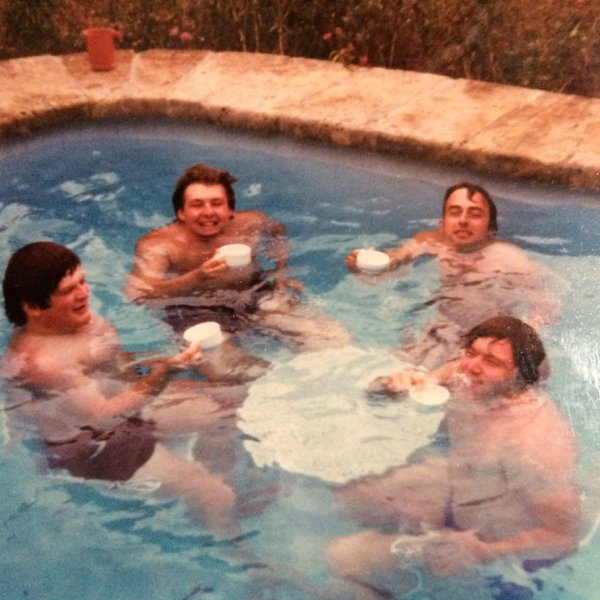 Jeff and I shared many hours, late nights, kebabs and Chinese takeaways while we rigged and de-rigged our varied assortment of PA and lighting equipment for concerts, shows and other ventures up and down the country. There other times of great fun too, with the tea party in swimming pool in Spain being amongst my favourites. Jeff, we had amazing times of friendship and camaraderie. You have given me fond and special memories. Rest in the peace as you enter the joy of your Lord. And may God’s comfort be with Mary, Ian, Tim and the family. Love Andy 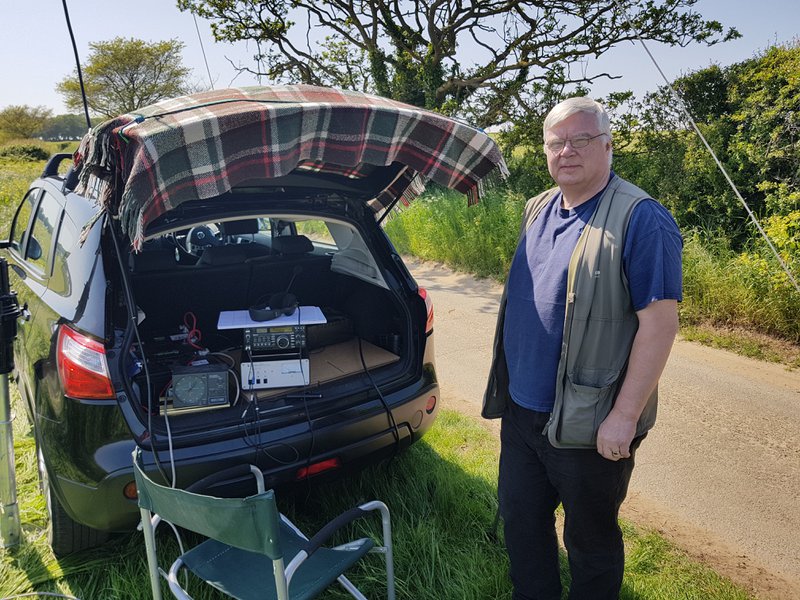 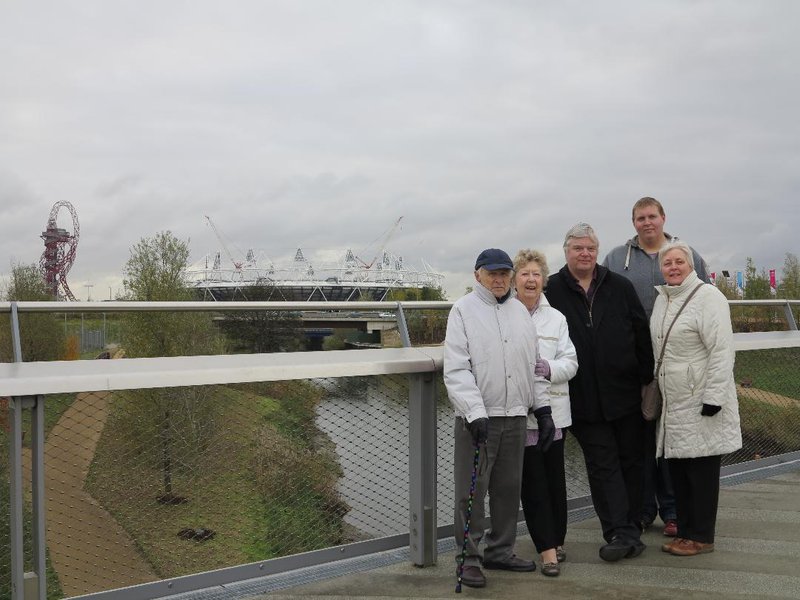 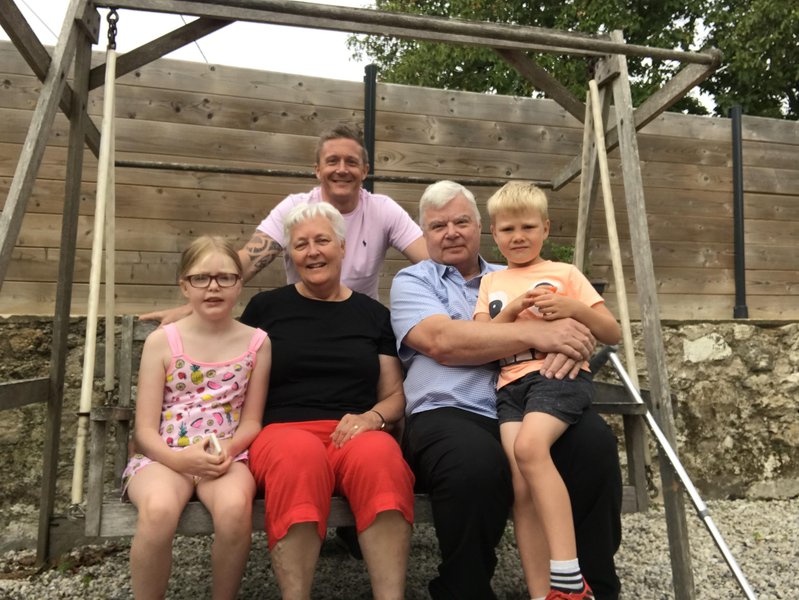 Joint Relay with a typical cheesy caption by a local newspaper. late seventies! 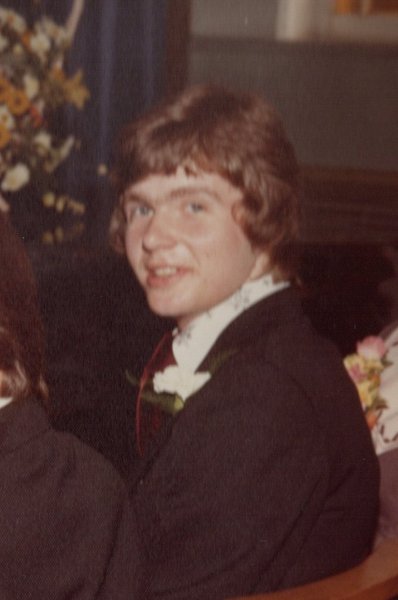 Jeff as Best Man at our wedding, August 1975 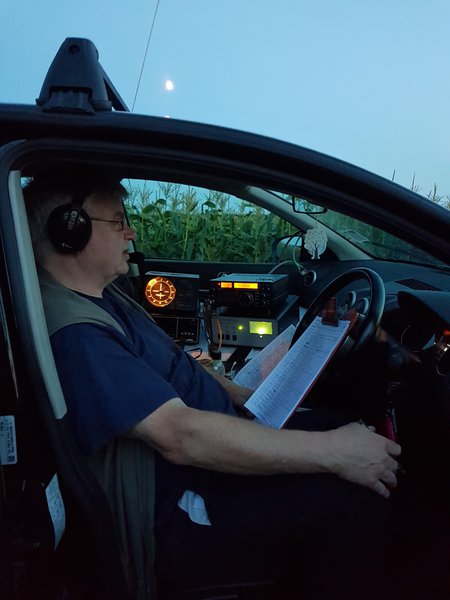 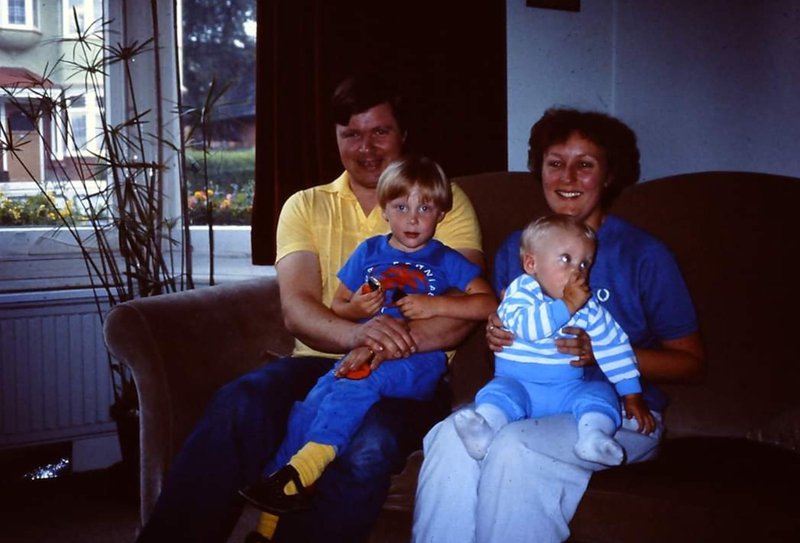 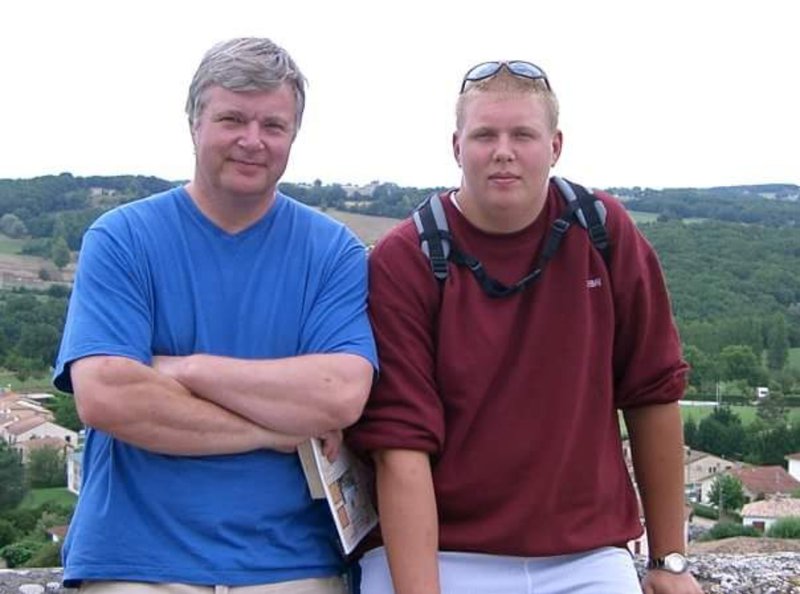 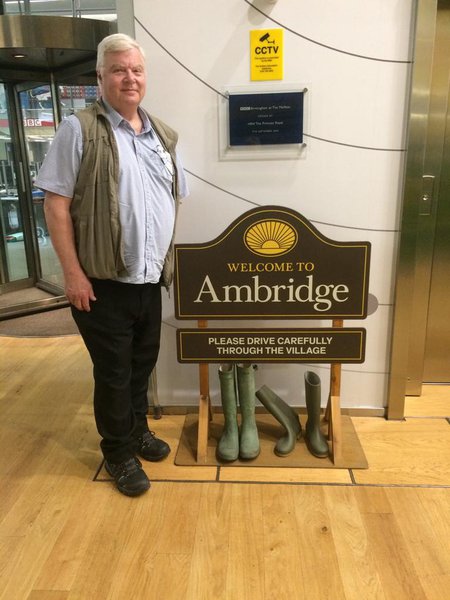 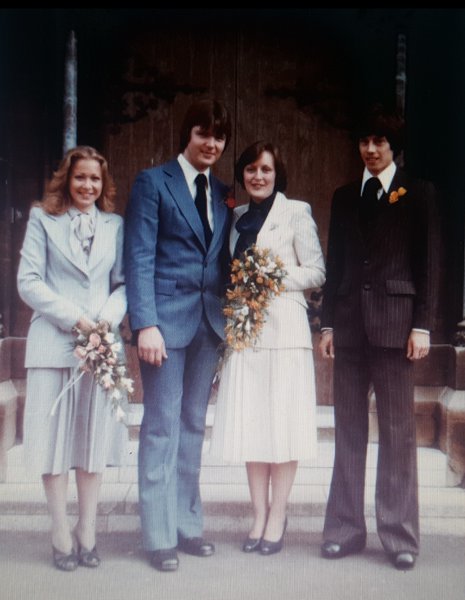 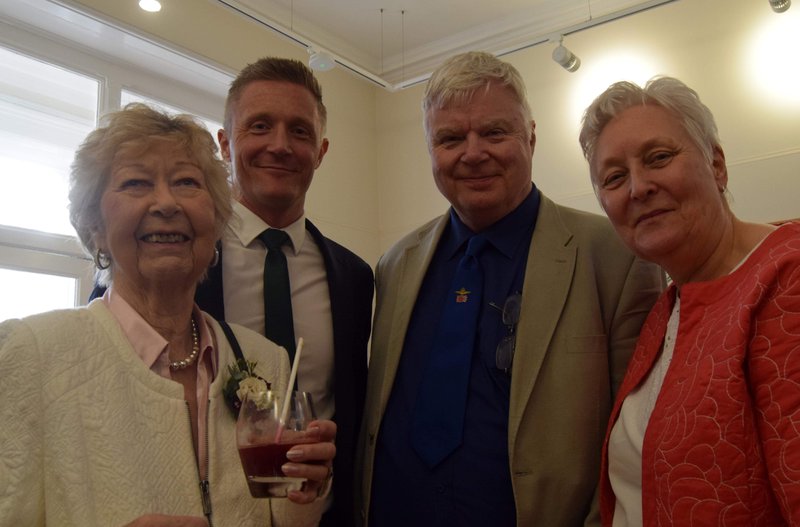