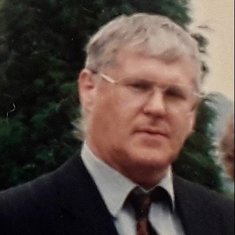 In loving memory of Michael Flynn who sadly passed away on 2nd April 2018, aged 83 years. A loved brother, brother in law, uncle and friend who will be greatly missed.

Michael was received into Church on Sunday 29th April at 7.15pm.
Please note donations in memory are for the church building and development fund.

Born in Rotherham to Kathleen and Thomas Flynn in 1934, Michael was one of 11 brothers and sisters. A loved brother of Terence, Gerald, Peter, Dermot, John, Tony, Mary, Patricia, Kathleen and Pauline. He is survived by his sister Kathleen Boyle.

Details of the Funeral Mass:

Psalm 24: ‘Those who hope in you, O Lord, shall not be disappointed’ reader: Yvonne Foody, Michael's niece

Hymns sung were:
Entrance: Dear Lord and Father of Mankind
Offertory: Abide with Me
Communion: Be Still for the Presence of the Lord
Exit: I'll Sing A Hymn to Mary

A special piece was sung by the choir at communion - A Celtic Blessing.

Michael's ashes will be buried at St Bede's RC Church, Rotherham following 9.30mass on Sunday 6 May 2018.

A EULOGY was read by Ann Marie Boyle (niece)

We have been very fortunate indeed to have such a special and interesting Uncle as Michael. And his family here today are the nephews and nieces of his many brothers and sisters.

Michael was the eighth child of eleven born to Thomas and Kathleen Flynn of Rotherham. His father was Irish, and his mother born in Penicuik, near Edinburgh was also from an Irish family. The Flynn’s were full of strong personalities, and of them all, Michael’s voice was particularly distinctive, and he shared with them the Flynn sense of humour.

Michael was the last surviving Flynn brother, but leaves behind him his sister Kathleen Boyle, my mother, who sadly due to illness cannot be with us today.

Close to his sister Kathleen, Michael was a regular visitor at our home in Rotherham, and most memorably he enjoyed Christmas Day with us for many years. I was always struck by the kindness of Michael in bringing gifts for each of us 5 Boyle children. Presents would emerge from the boot of the car chaotically wrapped and cold after a long drive. The first I remember was an illustrated book of the life of Dickens, which I read again and again. Michael was a person who loved to open minds, and stimulate discussion.

Michael shared with our Mum a love of singing, and on Christmas Day evening we would settle down round the fire and sing songs and carols together. We would enjoy discussing with him what Carol to sing next, and which were our favourites and why. And he would tell us about what he had been singing in the choir recently and about Christmas Day mass at his church that morning.

Over the years it has been fascinating to hear stories of Flynn family from Michael. You can imagine a household of eleven children would be quite noisy, and I recall him saying he used to escape from the house to the nearby woods so he could study in peace. Other stories include the games of cricket he would play with his brothers in the garden. They held their own test match series, taken seriously and with scores meticulously kept each time. He enjoyed talking about the great cricketers, and recalled how his brother Peter took him to see Don Bradman play at Herringthorpe Playing fields in Rotherham.

Michael was a caring and thoughtful brother, and was particularly close to his brother Tony. In her later years, the brothers enjoyed taking their mother away on holidays to the Lakes, Devon and Scotland. Michael also shared with Tony a vocation to the church. Michael always remembered our Mum's birthday and without fail one of Michael’s well chosen cards written in his beautiful handwriting would arrive. Most recently during Mum's illness Michael made the long drives over to see her with support of friends, and he would always ring on her birthday.

When we were growing up in a large extended family, we learned in snippets about the lives of the adults around us. Mum would mention…when Michael was a De La Salle Brother, and that he has studied at Cambridge, but of course it wasn’t a story Michael told us.

Over the years listening to Michael, I have learned about his devotion to the Church. And in recent days his dear friend Sr Mary, has also provided an insight into Michael’s journey. His vocation led him to join the De La Salle brothers after leaving school. The De La Salles are inspired by the compassion shown by Jesus in the gospels, and they have a mission of practical action, through teaching in schools. As a brother Michael taught children who would be described now as on the margins of our communities, and taught for many years in a reformatory school in Scotland, making a difference to young lives. Recognising Michael’s intellect, the brothers sent him to study at the University of Cambridge where he graduated in History. On returning to the De La Salles, Michael then took up training to the Priesthood and went on to study at the Beda College in Rome. But a life in the parish as a priest was not meant for Michael, and he also considered going to the Dominicans at that time. But, Michael’s path led him to continue his passion for teaching outside the order, but continued to live his vocation.

You will all know that Michael liked to voice his passion for the church, through asking questions and challenging us to think. He attended daily mass, and had a particular devotion to Mary and the power of the miraculous medal. He was enormously widely read and his home is full of books on Medieval, Roman and Greek history in French, and Latin. Through his studies I think he learned that there was always another version of the story, and another way of telling it, and he wasn’t one to allow a received wisdom to go unchallenged. But I think Michael was aware of overthinking too - he once said that the Christian Faith is deeper than we can think.

Away from his books, Michael loved to paint, and his walls were filled with sketches and studies of birds and animals, and saints too. Locally he was well known for his visits to Sainsbury’s café and the long cups of coffee and discussions with Sr Mary. And I was touched to receive a card signed by Sainsburys staff , from the Deli counter and Café.

Michael has been blessed by a supportive church community and great friendships here in Burton, and I would particularly like to thank Sr Mary and Pam and Colin, who helped Michael move to The Willows, which made such a difference to the quality of his life. Thanks also to Pam, Michael was able to attend our Mum’s 80th birthday party five years ago, which was one of the last occasions that all the Flynn family were able to get together for a celebration, and where we enjoyed hearing Michael sing a folk song , ‘The Road and the Miles to Dundee’.

There is so much to say about Michael, and we all look forward to sharing memories of him with you. His ashes will be buried at St Bede's church in Rotherham, which was the Flynn family's parish church, where his brother Tony was parish priest and where Michael’s journey in faith was kindled.

I would like to finish with a poem that Michael admired and which also reminded me of his devotion to Mary and those moments he liked to escape to the woods.

Lady and Queen and Mystery Manifold

And very Regent of the Untroubled Sky

Whom in a Dream St. Hilda did Behold

And heard as Woodland Music passing by,

This is the Faith in which I long to Live

This is the Faith in which I wish to die. 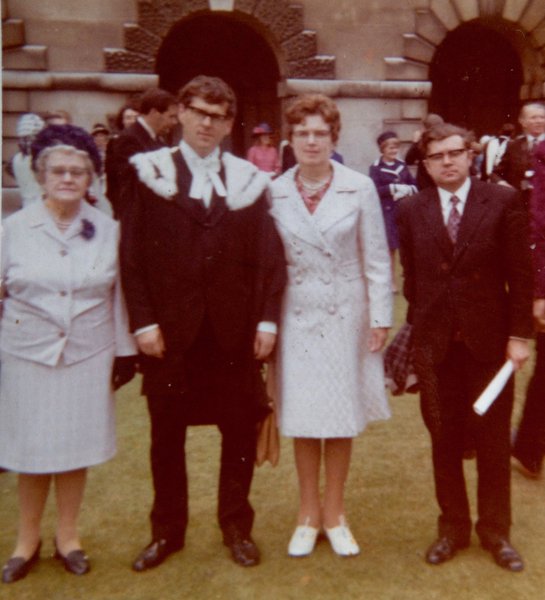 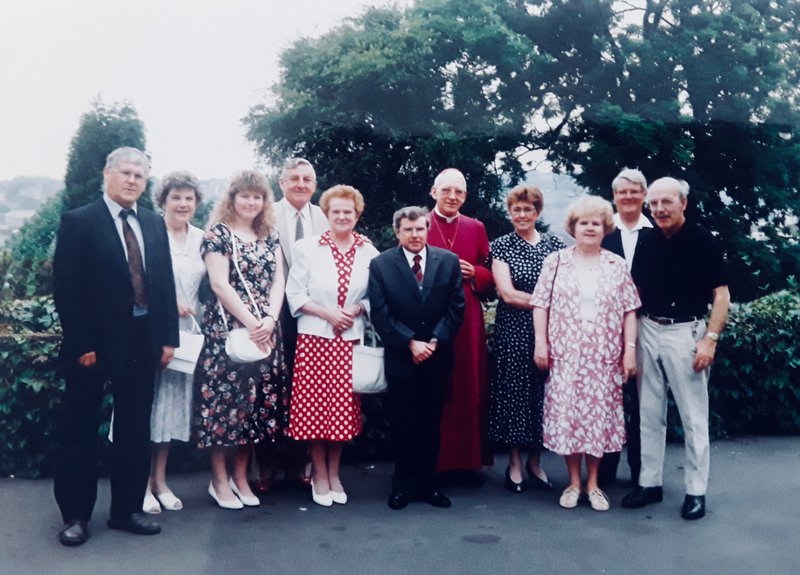 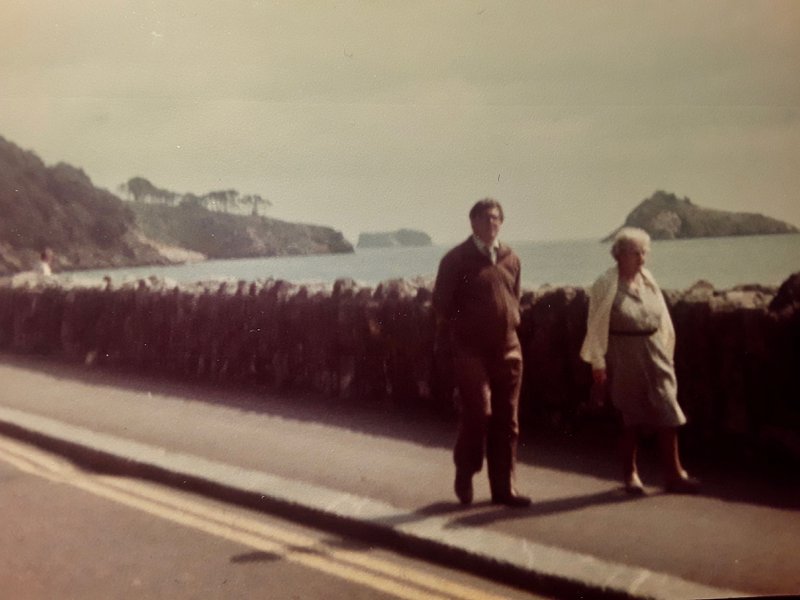 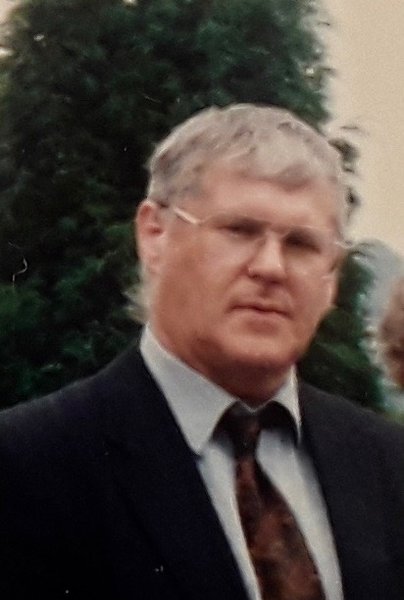