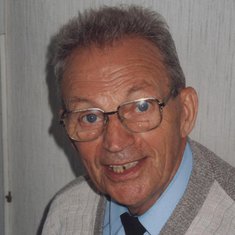 Dad was born 94 years ago in Wedmore, Somerset and was the only child of Walter and Charlotte. He was brought up in Llangibby where his dad was chauffeur to a wealthy family and it was here that Ernie first learned about cars and car maintenance. He was sometimes naughty at school and often got the cane from Dan Evans, the headmaster. On leaving school, dad became an apprentice to a local firm and first used his bike and then a motorbike to travel to Caerleon to R.T Lusty. He joined the Territorial army at this time – wearing a khaki uniform so when war broke out he was ready for action and went straight from TA camp to sign up in the REME, where his interest in all things mechanical and electrical were nurtured.
As an only child, cousins were the nearest he had to brothers and sisters but when he met Muriel in the course of his army life, stationed at North Nibley, Gloucs, he joined the Harris clan and immediately had 5 brothers and a sister as well as their respective wives and husbands. This was a source of great joy for dad and he is the last of this infamous family group to leave us having outlived them all. He always enjoyed family get-togethers, whether in the home of Grandma Harris at 30 High St, in the lovely garden at Egmont Avenue or later at our cousin's home in Leckhampstead.
Dad was quite strict as a father but being the only daughter, I always seemed to be able to win him over. In fact Dad was always patient and taught us many practical skills – rebuilding bicycles, motorbikes and even an old car at one point. Insulation tape featured highly in dad's DIY toolkit. He came from a generation who made do and mended and he continued this philosophy throughout his life. There were also stores of ex BR conduit piping which lasted way beyond his needs but were sometimes put to good use; sorting out the shed with Bob and Peter many years later revealed a real squirrel mentality, “this may come in useful one day”. Dad also liked to carry screwdrivers, pencils and pens as well as a pressure gauge in his top pocket and in addition several half eaten packets of polos in his side pockets and an array of badges too.
Uniforms also played an important part in dad's leisure activities. He was always one of life’s givers and in the 50s he joined the Civil Defence, navy-blue uniform this time and trousers which came up to his armpits. Dad’s practical skills were put to good use in the CD, making-do and mending in a time of shortage was his forte. He could repair anything and often did: kettles, irons, hairdryers – all the things which we now throw away and replace with new ones – he always tried to mend them if he could. He built a coal bunker making wooden shuttering out of odd pieces of wood and putting in metal reinforcement which was probably courtesy of BR. Mixing cement and laying bricks were just some of his many talents.

Travelling daily to London as an Estimating Draughtsman and Electrical Engineer, he worked for BR for many years, attending Watford Technical college to secure an ONC in Electrical Engineering. This must have been a true test of his endurance leaving home at 7 am and returning on his bicycle from Bletchley station at 9pm or even later. Woodwork classes were also attended and produced a book case, table plus lamp and oak chandelier, these were finished in the Newton Road kitchen before we had a shed. He was well supported by mum who was an excellent cook and always had a meal ready for him when he got in tired and hungry. Dad’s thrifty nature meant we were encouraged to eat everything offered but ‘Bertie Thomas’ a boy dad had invented from a London bomb site would be glad to have it or toys and clothes which we turned down. Needless to say the imaginary Bertie taught us much and has always remained with us.

Dad was a Scout leader in those early days at Newton Road and this interest in Scouting lasted almost to the end of his life. Knee length khaki corduroy shorts were his usual Scout gear and the little wooden toggles on a leather necklet, the Woodbadge, which he wore round his neck paid tribute to hard work at Gilwell, where he camped in the snow and probably started the campfire by rubbing 2 sticks together.

Dad was a handsome man and a bit of a flirt too. He liked a cuddle with a pretty lady and most of them didn't seem to mind his amorous embraces but there was never any substance to his extrovert ways and mum was very forebearing.

Ernie Smith has been a great dad – encouraging all three of us to get qualified, always willing to refurbish bikes for us and help with gardening or household jobs as we grew older and able to mend broken toys, electrical appliances as well as cars and motorbikes. He’s always been involved in charitable works, more recently, the Red Cross, and I think we will always picture him when he “starred” in an amateur video wearing Red Cross uniform complete with cap pulled down almost to his nose. “Stay Calm but act quickly” was his opening line to be repeated many times after each short section and by the end we were all in hysterics.

When we moved to Wordsworth Drive he saved money by erecting a concrete panelled garage. This he filled with many electrical spares and tools. It was very out of character when dad drove his car home after a night out with contractors. The car was put away in the garage but Bob and I had to jack it up next day to recover the tool box he had driven over.

After working for Milton Keynes Development Corporation on street lighting and latterly on children’s play areas he retired but kept busy: Stony Stratford Red Cross, Scouting for Boys with a Disability including driving the Scout Ambulance; kept him and mum busy. A very serious car accident in 1991 still didn’t stop him and recovery including Friendly Hotel Gym membership followed. Most of his retirement activities were done with mum, especially since dad was the only driver! Mum would go to Campbell Centre as volunteer receptionist whilst dad would assist rehab patients in the Hydro pool. Both worked hard as members of MKH League of Friends making the dream of a local hospital a reality.

Dad managed to whistle and smile under all difficulties even after losing Muriel. At the end of his days he still gave us a smile but we were not sure if he knew us all. He loved to see the great grand children and would show his pleasure playing cars and sharing sweets which they would take to him.

He had a full life and gave a lot of his time to others and although we are sad to lose him he was a great example. 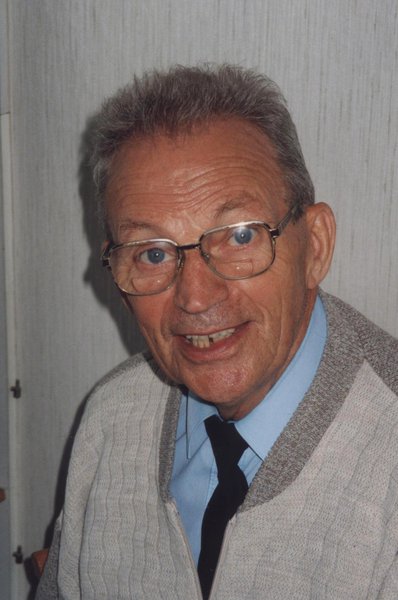