A Guide to Catholic funeral etiquette, rites and traditions 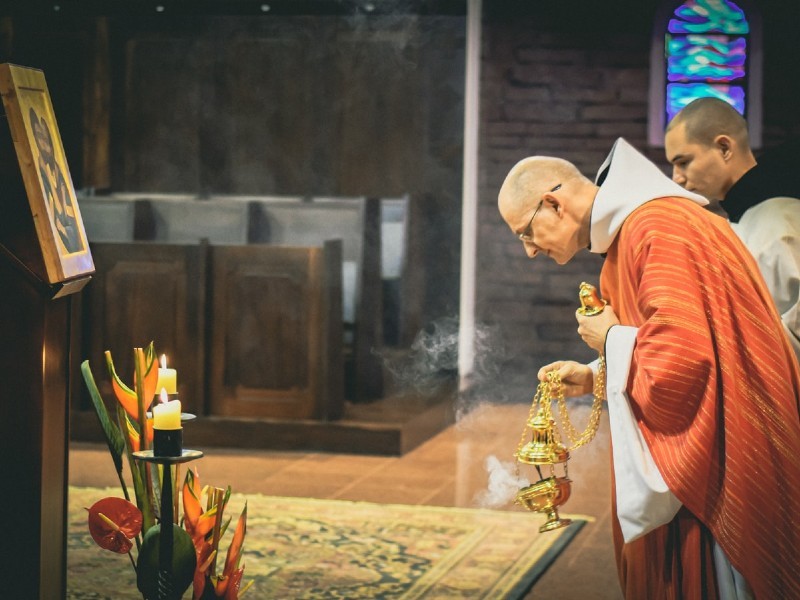 This guide to Catholic funerals explains everything you need to know about Catholic beliefs about death, Catholic funeral rites, including the recommended dress code and etiquette for mourning.

What are Catholic beliefs about death?

Catholics believe in life after death. They believe that their actions during life determines whether a person’s soul goes directly to heaven or hell, or spend time in purgatory.

In Catholic theology purgatory means that even someone who has repented for sins during their lifetime cannot go directly to heaven as immediately as someone who has never sinned. In the Middle Ages it was believed that ghosts were spirits of the dead who needed living people to help them fulfil their obligations before they were allowed to enter heaven.

Many medieval ghost stories feature people compelled to complete tasks on behalf of the ghosts of people trapped in purgatory. In the 16th century the Protestant Reformation condemned this doctrine. Belief in purgatory is one of the major differences between Catholics and Protestants.

Not all modern Catholics believe in purgatory themselves, but it is still an official doctrine of the Catholic Church. The belief in purgatory encouraged the development of traditions, such as prayers and vigils for the dead, which are reflected in current Catholic funeral rites.

What happens before a Catholic funeral?

After a Catholic has died their family may hold a prayer vigil on the evening before their funeral, sometimes called reception of the body. The prayer vigil usually happens at the church where the funeral will take place, but can also be at the family home or a funeral director’s <ahref="https://www.funeralguide.co.uk/help-resources/arranging-a-funeral/what-is-a-chapel-of-rest” target= "_blank" >chapel of rest. At the prayer vigil, mourners are encouraged to pray in remembrance of the person who has died. This gathering is usually led by a priest or a deacon, though an un-ordained lay-priest may also preside over it. The family of the person who has died might also request that eulogies and other tributes are delivered at the vigil.

What happens at a Catholic funeral?

The format of a Catholic funeral service depends on whether it includes a Requiem Mass, which includes the Eucharistic Prayer and Holy Communion. Requiem Masses are not necessary, but encouraged by the Church and are often the wish of practicing Catholics. If the coffin was not received by the church the evening before the funeral it will be greeted at the door on the day by the priest. He will sprinkle the coffin with holy water and lead it into the church.

The coffin will be placed on a

The funeral liturgy will include at least one reading from the Old Testament and a psalm, which are read by family, friends or the priest. The priest will read a passage from one of the gospels, deliver a homily and give a eulogy for the person who has died.

If the funeral includes a Requiem Mass then bread and wine might be placed on the altar for Holy Communion.

Mourners will form a procession to receive Holy Communion or, if they are not a Catholic, a blessing from the priest.

After Holy Communion there might be a further eulogy before special prayers, called the Final Commendation. Afterwards, the coffin is sprinkled with more holy water and friends and family say goodbye to their loved one.

Holy Communion can only be performed by an ordained priest and if one is not available the funeral liturgy will not include Mass.

What type of music is included in a Catholic funeral?

Music at a Catholic funeral is restricted to Catholic

A Catholic funeral service without Mass usually lasts 40 minutes. A funeral with Mass often exceeds an hour. Some of the most

The funeral of Antonin Scalia, a justice of the Supreme Court of the United States, who died in 2016, was a Catholic service.

What happens at a Catholic burial or cremation?

The burial or cremation of a Catholic starts with a

Catholic funerals are traditionally followed by burial, and embalming is acceptable. In 1963, Pope Paul VI decreed that Catholics can be cremated. A Catholic’s ashes should be interred in a cremation plot in a cemetery or kept in an urn in a

In 2016 Pope Francis decreed that ashes should not be scattered or kept in an urn at home.

Catholics do not have a prescribed mourning period, but some families may decide to have a memorial service up to six months after the death of their loved one, or on the anniversary of their death.

What is the etiquette and dress-code for a Catholic funeral?

Mourners at Catholic funerals generally wear smart clothing in dark colours. A black or dark-coloured suit and tie for men is traditional, and smart black dress or suit for women.

Mourners are expected to dress modestly, but head coverings are not required.

Some churches are increasingly open to colourful dress codes and other alternative options, but if in doubt, avoid casual clothing such as jeans, sportswear, hoodies, trainers and slogan t-shirts.

During prayers it is usually acceptable to bow your head and stay seated, but some people might kneel. The congregation might stand during parts of the service, for example when they are singing hymns. You do not have to do this if you are not physically able to do so.

If you are not a Catholic you do not have to participate in the procession for Holy Communion, but are welcome to do so. You should not take communion, but be blessed by a priest.

Find out more information about other types of religious funeral.