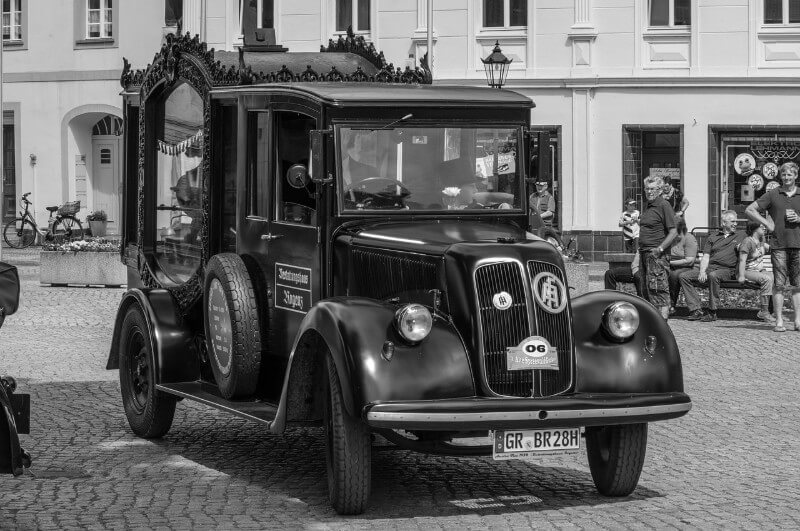 Photo by Michael Kauer on Pixabay

Most funeral processions are led by a type of funeral transport called a hearse, which takes the person who has died in their coffin to the venue for their funeral and, if they are being buried, to the cemetery or natural burial ground.

This guide to hearses explains the purpose and history of this unique vehicle.

What is a hearse?

A hearse is essentially any vehicle with a long chassis that is adapted to accommodate a coffin behind the driver(s) seats. Most modern hearses are stretch-limousines, but horse-drawn carriages are still in use, but there are a host of alternative ways to transport someone who has died to their funeral venue – ranging from specially modified motorcycle sidecars, to VW camper hearses.

A carefully secured coffin can be transported to a funeral in an ordinary van or estate car, but most people choose for some form of hearse to lead the funeral procession – also known as a cortege – on the day of the funeral.

Funeral directors typically collect the body of a person who has died in a first call vehicle – a specially modified van with tinted windows so that passers-by cannot see in. The hearse is reserved for the funeral procession.

Why do they call it a hearse?

The word hearse derives from herce, the Anglo-Norman French word for a harrow, a farming tool used to cover sown seeds with earth. During a funeral a coffin is rested on a structure called a bier or catafalque, with a cloth, or pall, laid over it.

In the Middle Ages the herce or, in Latin, herpex, was a frame that surrounded this structure and supported the pall. The resemblance of this structure to a harrow inspired the name herce, which eventually evolved into hearse. By the 1600s, hearse also described any structure that supported the coffin, including the transport that brought it to the church for the funeral service.

The history of Horse-drawn carriage hearses starts in the 17th century when they first appeared to replace biers carried by mourners. In the 19th century a specific style of hearse emerged: Mahogany carriages with intricate carvings and black velvet drapes. Glass-sided hearses were popular, because Victorian by-passers were often keen to see the coffin.

It is still possible to request a horse-drawn hearse for a funeral. There are a number of livery stables around the UK that specialise in providing funeral coaches and the horses that pull them.

Most funeral directors can arrange for a horse-drawn hearse, even if they do not provide this type of transport themselves. It may even be possible to choose the colour of the horses.

Most modern hearses in use today are black motorcars. A number of well-known car manufacturers make hearses and funeral limousines, including Rolls Royce, Daimler, Mercedes, Jaguar, Volvo, Vauxhall, Ford and Maserati. The first motorised hearses appeared in the early 20th century, shortly after the invention of cars. A hearse is generally included in the price of many funeral packages, with many also including the provision of a funeral car for mourners, too.

Extra funeral cars for mourners can cost at least £250, with the cost of a horse-drawn hearse often exceeding £1000. Alternative and bespoke funeral transport is often provided by a third-party carriage master.

As funerals have become more personalised to reflect the life of the person who has died, alternative funeral transport has become increasingly common. If a vehicle has a chassis that’s long and wide enough it can probably be modified to carry a coffin, so even if it’s a motorbike or a JCB digger, it’s still a hearse! One of the earliest alternative hearses was for a funeral in 1926, when a woman who died requested that the carriage containing her coffin was pulled by men. She also specified that only men were allowed to attend her funeral.

Among the most popular alternative options provided by funeral homes and specialist carriage masters is the motorcycle hearse, with a glass-sided sidecar conveying the coffin. Harley Davidson hearses, along with Triumphs and Thunderbirds, are especially popular for biker funerals.

VW campers, motor trikes, hot-rods, Land Rover, JCBs, vintage flatbed trucks and even taxis are among the variety of alternative ways that someone can travel to their own funeral in style. One specialist funeral transport company in the UK even has a yellow Reliant Robin hearse for hire.

Hearses need not be black and it’s possible to request cars or horse-drawn carriages in a variety of eye catching liveries, from leopard print and flower-power patterns to Union Flag designs.