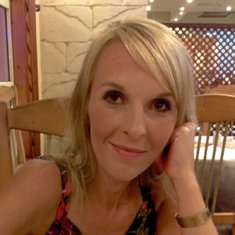 Donate in memory of
KeeleyMaggie's Centres

Keeley made her entrance to this world on 1oth July 1978 at 17.10pm. In true "Utting" style it took her quite a long time to arrive and no doubt even in the womb she was hoovering, putting another load of washing in or loading the dishwasher!
Her parents, Ian and Pat chose the name Keeley because it means " beautiful one " and over the next 42 years she certainly did her name proud.

She spent the first few months of her life at Nuncargate and then she moved to Ashmore Avenue at Sutton in Ashfield.
Kirstie, her sister, joined the family in 1979. Keeley wasn't very impressed by this and nor was the family cat " Tinker". Over time this changed and though "Tinker" is now long gone, Keeley and Kirstie became not only sisters but best friends. They were inseparable and fiercely loyal, protective and supportive of each other. They were so close that the 6 children they have between them had not only Aunties but almost " second mums". Keeley took a huge part of Kirstie's heart with her when she passed away.

Besides Kirstie , Keeley's other best friend was Andre her toy dog. He was an original Andrex puppy soft toy and wherever she went so did he, He was very loved and has a knitted jumper now to hide his bare patches and he resides on a shelf with George's teddy bear.

She was educated at the Carousel playgroup, then Mapplewells Infant and Primary School and finished her education at Ashfield Comprehensive.

Keeley was a keen ballroom and latin dancer and attended dance classes every Saturday. She took this quite seriously and as her husband George commented her critique of the celebrities on " Strictly" was like having Craig Revell Horwood in the room!

She had a Saturday job as a hairdresser and after leaving school worked at several salons, gaining her qualifications at West Notts College and finally over 20 years ago she took ownership of her own salon Occasions. Eventually her daughter Georgia would join her and the salon will continue on through her.

In 1996 Keeley met Dave and they had Georgia in 1997. Given her tender years Keeley was a brilliant Mum and kept an immaculate home , despite the many faults and problems an old, rented terraced house brought. Her Nana Joan was an incredible support and enabled Keeley to return to work, She would give Keeley an alarm call every morning and on one occasion had to take a taxi to Huthwaite when Keeley did not answer her call. Keeley finally opened the door and was oblivious to Nana Joan's panic.

In 2007 Keeley and Dave parted and this was a very worrying time for all. It was a very difficult and upsetting period of Keeley's life as she had found herself pregnant again and didn't want to be classed as a single mum, however with the help and support of her family she started to rebuild her life and move on.

In 2008 she was invited to a BBQ for a clients 40th birthday. She attended the party at Twinyard's Farm and was waited on all evening by George who was the client Julie's brother. Keeley remarked when she returned home that she thought " she had pulled without even trying" and was sure that George had served her the best steaks all evening,(which he later admitted was correct). George asked Julie to give him Keeley's phone number but Julie knowing what Keeley had been through told him that provided he didn't mess her about she would give HIS number to Keeley and then it would be up to her.
She dithered for a few days and finally plucked up the courage to call him and the rest as they say is history.She returned from their first date " floating on air" and said that George had treated her " like a Princess". They had a traditional courtship and eventually Keeley moved to Twinyard's, with George's parents Rita and Dave living next door. They were married in 2010. They married at St Werburgh's Blackwell on July 10th 2010 and had a marquee reception at the farm. The weather was perfect and they shared a memorable day with around 300 guests. They honeymooned in Cape Verde before starting married life at Twinyard's.

Georgia and Ethan were soon joined by Freddie in 2011 and Grace in 2012. The family were then joined by Harley a Springer Spaniel and last year Elmo a French Bulldog , who is a character in his own right. Though Keeley loved her home she always said that she would happily live in a tent or cardboard, box if necessary, just as long as they were all together , however that may not have been as easy as it sounded as Keeley hated the cold and creepy crawlies.

The family shared many happy holidays with family and friends and George and Keeley's respective circle of friends encompassed them all. The boys and George became very involved in football and Keeley made many new friends through that too. Life was good ... or so it seemed.

In 2017 Keeley was diagnosed with an aggressive form of Breast Cancer, which was also genetic as she had inherited the BRCA1 gene mutation. She faced this cruel disease with fierce determination and courage, Despite radical operations and aggressive treatments she never complained, She and George didn't hide her illness but fiercely protected the children from having their young lives blighted by it. To the end she remained polite and courteous to the hospital staff . She fought and fought and her courage inspired and amazed us all, Despite her illness she kept an immaculate home and tended to her garden whenever she could, She helped George and her parents build their Summer houses and would never give in or admit she was tired. She minded her mum and dad's dog Hugo whilst they worked . She even started Pilates classes, which she loved. Georgia was a remarkable help to her Mum and George and her siblings throughout this time.

In November 2020 it started to become obvious that her illness was progressing and her chemo became more and more toxic, Despite this she was determined that George and the children would enjoy a memorable Christmas and they did. George paid tribute to her courage and tenacity and beauty as a woman by writing her a tender poem and buying her some Jimmy Choo trainers. Her illness had never detracted from her style and beauty and the doctors and nurses complimented her on her bright, perfectly manicured nails.

At the end of April she deteriorated rapidly and spent her last days in hospital, passing away on May 6th.

Keeley was many things to many people and her love for George was unbreakable. Her love for her children was endless and she protected them with strength and pride, nurtured them and sheltered them from harm. She was a loving daughter, sister , auntie, daughter in law, sister in law and a wonderful friend. That love and bond can never be broken and she will never be forgotten. Her memory will live on and she will never be forgotten but she was taken far too soon.

" She made broken look beautiful, strong seem invincible and she carried the universe on her shoulders and made it look like a pair of wings".

Goodnight God Bless, Sweet dreams Keeley. We all love and miss you x

Only just found out that you’re gone!
I remember walking home from dance as kids saying we were going to live in Barbados as grown ups ☺️
Such good times and memories.
You will be missed xx

Oh what to write about a person who took a chance me and taught me well! From my first interview we hit it off and found we had so much in common. The longest interview I’d had and you had done.
I’d say it paid off as we became friends.
The salon laughs,the birthday boat party, my wedding, children’s party’s and even your wedding was all a pleasure to have you and be apart of. I’m so grateful to of met you and to have shared some special moments with you. I know we lost touch as life went on.
So I’ll come find you for a catch up when it’s my turn my sweet. Until then my lovely, sleep tight
and rest easy beautiful. Xxx

Keeley your friends and family have also donated another £500 in cash and this will now be sent to the Honeyrose Foundation who sent you all on a weeks holiday to Wales . All expenses paid. We hope that it will go towards giving someone or a family a much needed treat and help them build memories together x x our memories of you are precious and will never fade x x x love dad and mum x

Where to start...so blessed for having you in our lives....thank you for being my friend...I.will treasure all our blonde moments....and that will be a few or two...lol....xxxx
You are one of a kind Kee your strength and determination always inspired me no matter how pants you felt you still always had that loving smile....gonna miss that smile Mrs but never will forget it....for now hun but never forgotten...rest in peace my lovely...good night gorgeous...💕😘💕

Beautiful inside and out, RIP lovely, taken far too soon ! Thoughts are with the whole family always xx

We love and miss you forever. Kirstie, Paul, Chester and Oscar. Xx

In memory of Keeley, will be sadly missed by all 💔

In memory of a much loved daughter in law ❤

Our hearts break for you all, the most beautiful lady with the kindest heart who will be missed by everyone who had the pleasure of knowing her, rest in peace Keeley 💔

George & family. Thinking of you all at this very sad time