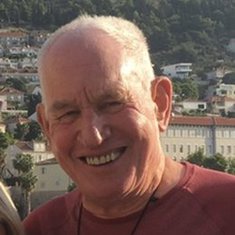 Alan was born in Hull in 1937 and his early memories were of being evacuated to Saltaire and returning to live near Hull docks before the end of the war, where the air raids and the doodlebugs were exciting for a young lad. Passing the 11+, he went to Malet Lambert Grammar School but his dad made him leave at 16. He joined the Inland Revenue – good pension, son! He did two years National Service, underground in the middle of a forest in Germany, as a radar operator. As a young man he played the trumpet in a jazz band and was a keen cyclist.
He did Head office relief in Chelsea in the early 60s, spending his spare time drawing and painting. He handed in his notice and applied to Chelsea College of Art where he spent four years, finishing second in the year. He married and had two daughters. He taught for a few years then printed Marc Bolan and David Bowie tee shirts which led to a mail order business and then dress shops in Hull and on Gillygate in York.
He moved to France, bought a Chateau and ran a holiday business until he met Rosie in 1998. They had twenty-two happy years together with her three daughters, their husbands and the six grandchildren who followed.
He was diagnosed with advanced prostate cancer last year which progressed quicker than it should have. They rushed to organise a wedding blessing in the village church and just made it before lockdown.
Primarily, Alan was an artist, a painter, a skilled draughtsman with a pencil or a piece of charcoal. He lived to paint and did so until a couple of days before he died. He was also a family man and a much- loved husband and “naughty” grandad!

He used to take me to school (from Cottingham to Pocklington) for many terms in his car - where we enjoyed long discussions about the current rock, blues or rock and roll.

(in fact, he once asked me "Do you like Gene Vincent?" and such was my ignorance I replied " never heard of her" - Alan laughed for about 10 minutes solid - and reminded me of this often!

I have many many lasting memories of wonderful times...

When he gave Ian Staines and I (aged 14) a lift to York Museum Gardens - where we were all due to watch Pink Fairies and Hawkwind - Ian and I got in but Alans ticket wasn’t valid (or something) - Ian and I ended up hitching back to Cottingham in the middle of the night (I have to add - after Alan had searched for us for hours amongst the thousands of rock fans leaving the concert - there were no mobile phones in those days!)

When I created an etching (under his tutelage) that was deemed to be so good that it was hung in the Pocklington School staff room for a year! (the only good thing I ever did at that school) - thanks Alan!

Thank you Alan for showing us that 80 is the new 40.. your passion and curiosity for life made you such fun to be around, we feel we were lucky to know you Alan and thank you for the introduction to early Louis Armstrong, loved bumping into you and Rosie at Village events and meeting up over supper what a great couple and how we all enjoyed your French Pop Up at the village cafe where you raised funds for the little church and also as co-founder, with Rosie, of the Village Book (wine) Club a club whose members ages span 6 decades and we all have such a laugh and that’s down to you two, we’ll miss you Alan, gods speed

We had so much love for Alan and Rosie who joined Raskelf and moved in next door to us.... We had had the neighbours from hell prior to this couple and what a breath of frsh air they were. They knew me and my husband to go from a newly married couple to a family of 4 and the kids would always get chucked over the fence to be entertained by Alan! I can see why he was called the 'Naughty Grandad'!!
He taught me how to look after my garden and certain flowers/plants or shrubs,
Will certainly miss the stories he used to tell us over the fence. Always had a smile on his face........ Have a good drink up there Alan, I am relieved to know that you suffer no more.

Love Reading about his life....... Talk about busy! And to always smile meant he had to be one of the happiest men I know. 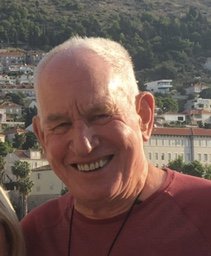