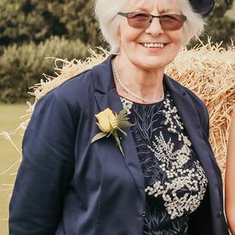 In loving memory of Mary Bowden aged 77 years of Highampton, who sadly passed away on 12th July 2020 after an illness bravely bourne.
Devoted Wife of Bill, Loving Mother of Tracey and Kevin, Mark & Theresa, much loved nan of Charlotte, Becky, Abby, Emily, Will & Izzy and her five Great- Grandchildren.
Funeral Private.
Donations if desired to Cancer Research UK c/o N. Lock & Son, Black Torrington, EX21 5QD or via this page

Mum was born on the 19th October 1942 to John and Mary Dennis. The eighth child of ten, and the youngest girl. Mum always said her parents had run out of names by the time they’d got to her, just being plain Mary with no middle name. She also said being the seventh daughter of a seventh son she was meant to have some mystical powers- but she never discovered them!

Mum was always a hard working person, even as a teenager. She said she would often jump off the school bus on a Friday evening to help her elder sisters look after their children, or when harvesting would drive the tractor while her dad stayed on the trailer making the load- meaning she had to stop, jump off, throw some hay up and then get back onto the tractor to move it further along the field.

Trevor remembers when Mary had to keep calling him and John to get out of bed. If they didn’t move Mary would get mad and come up with a glass of water to throw at them. If she threw the water they knew they’d have a damp bed to get into that night! On the first of April one year Mary came in shouting that some bullocks had broken out and were heading towards the main road. So, John jumped on his pushbike saying he would go up past Denny’s to Folly Gate, hoping to get ahead of them. When Mary heard this she told Trev to go after him and catch him as it was an April fools joke. Trev couldn’t catch him and told Mary when John returned she could tell him it was an April fools as he was staying out of the way!

Mum met Bill at a Hunt ball - well that’s what he thinks! Being advised that he was a bit of ‘likely lad’ she carried on courting anyway, eventually marrying him in 1963. They moved to Lower Pulworthy where they went on to have Tracey in ’65 and Mark in ’68. They were married for a grand old 57 years.

Mum was an early bird enjoying the mornings, getting up many a day, long before sunrise! Tracey recalls mums daily routine before school. Mum and Dad, would get up and have a cup of tea with a slice of bread and jam, before heading out to start the milking. Mum would then feed the calves, before coming in and making sure we were up and getting our breakfast. Still in her boilersuit she would vacuum through every morning, going back out to help dad finish off and wash out! Mark remembers mum banging on his bedroom window at six to get up for work – even when he was married with children. At least he didn’t get the glass of water!!

When Mum y was in her late 50’s she decided she’d never had a ‘proper job’ going out to work, so she found herself part-time employment down at Homeleigh Garden Centre which she thoroughly enjoyed for about 5 years.

The grandchildren remember Nans delicious Sunday roasts and seeing how many roast potatoes they could eat – Abby managing 10! Sunday-school outings were another lovely memory, nan packing great picnics for the masses, she would often mention the day a seagull swooped down and stole uncle Johns icecream! The day generally ended with fish and chips on the way home!
Mum was always very proud of her grandchildren, with Charlotte, Becky, Abby and Emily all getting first class degrees and going on to work in the medical profession. Will, recently joined the Army and Mum loved seeing his photos as he progressed with his training and then with him ‘passing out’ not long ago…and of course her youngest granddaughter Izzy, who she enjoyed seeing all dressed up for Hunting on her horse while studying hard with her exams and achieving excellent results.

In recent years as Dads health made it a little difficult for him to go on holiday (not that he really minded) he encouraged Mum to go away for a few days with her sister Jean and niece Rose – who she always said was like a sister. Reading between the lines I think they had good times, eating out, visiting different parts of the country, having a few cheeky drinks and being led astray by Rose’s shopping! As Mary’s illness progressed she was still determined to meet for their monthly lunch at Weatherspoons - even though she didn’t have much appetite.

A special mention must be made here to Mark and Theresa for their hardwork over the last few months in these difficult times, and also to North Devon Hospice for their unrivalled care in her final days.

To end - Mum appreciated the simple things in life such as her flowers, the countryside and coastline - especially the waves on a stormy day. She will always be remembered for being a hard working, determined lady who didn’t want to make a fuss about her illness. First and foremost she will be remembered as a devoted wife, a loving mother and a great grandmother to her six grandchildren and five great grandchildren, and will be forever in their hearts.

All our love, always xxxx

Denny and Brenda Hhoper donated £20 in memory of Mary

I'm grateful for this opportunity to share my memories of Mary. I worked alongside her for the time she worked at Homeleigh Garden Centre. She was so lovely to meet and work with. We laughed together daily. She was missed when she left but my life had been enriched as our paths crossed. I hope she was able to enjoy her Opticron Traveler 6 x 32 in the years after she left. I shall always remember her with joy in my heart.

Always in our hearts
Forever in our thoughts.

Wonderful memories of a special Auntie.

Great memories of a lovely lady who was always smiling, x

Frances and John Dufty donated £10 in memory of Mary

To a darling sister.
We will miss you and always think of you.

You were always smiling and so special we will always miss you. xx 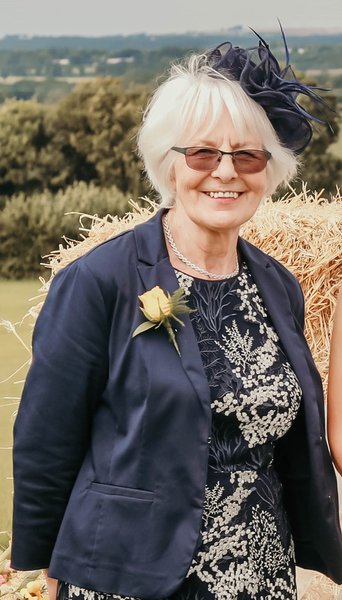