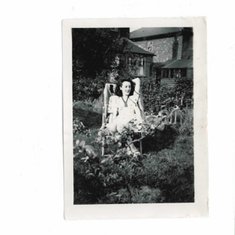 Donate in memory of
GwendolineMarie Curie

One of many cousins with 11 aunts and uncles on her mothers side alone.

Lived in Cuckoo Road, Nechells, Birmingham and has many old photos of the street. It was right in the heart of the City and must have been a fairly hard area, but she talked of her upbringing there fondly.

My first memories of her were at Manor Rd, Stetchford where her Mum and Dad lived and where it was obvious she had spent a lot of time close to some of that extended family.

She had mentioned Uncle Wal with whom she had learned the rudiments of the piano. We had a piano in our house as children and it is one of my regrets that I never learned to play it. However Mum never really did either…she just played by ear as Uncle Wal had shown her. I have always loved music despite Mums efforts.

Mums real passion in life was for dancing. Beryl remembers that Mum was always keen to get on the dancefloor saying “Come on Gal”. I can vouch for the fact that Mum continued in this vein throughout her life and was full of the same sort of spirit at her Golden Wedding celebrations in 1998, trying to drag Neil and I on to the dancefloor against our better judgement.

Mum had married Dad on 28th August 1948. They had met at a factory where they both worked before the war, when Dad used to ask her to look after his bike just so he could talk to her. The fact that he didn’t actually have a bike didn’t seem to bother either of them. Dad was away in Palestine with Dennis, and Mum and Dad became lifelong friends with Dennis and his wife Bron, both of whom were luckily as keen on dancing as Mum.

In the early years of their marriage Mum and Dad lived with Mum’s parents at Manor Rd, before, in early 1955, they bought their first, and only, house…the one we all know at 5,Gilson Way,Kingshurst. From the many letters and published artefacts I have found, I know how much pride she had, not only in the house, but also the locality and its history.

She contributed to a “History of Kingshurst” book that was published in the 70’s and here are some of her quotes ;

“Holiday weekend of May 1955 found my husband and I moving into our first real home after seven years living in rooms. We hoped to get everything straightforward and tidy by the time our first baby was due in October”
“Looking from our front window we could see the spire of Coleshill Church across the fields, and across the main Chester Road I soon found that Woodlands Farm sold new laid eggs. One could cut across the fields alongside the farm into Coleshill. It was a balmy summer that year and our house was filled with midges enjoying what I suspect was a good feed off our new plaster. It was a common occurrence for horses to get loose from the surrounding farms and they would come cantering down our unmade road and whinney as they made their way across the fields reminding me of Dick Turpin’s Bess”
“ It was a common sight to see cows wandering across the open land between Overgreen Drive and the river. The residents of Kingshurst wanted somewhere for their children to play sports so we got together and had a tote every week to but facilites for this purpose, and this is the playing fields and Pavilion at the bottom of Meriden Drive”


I can remember early days in the house, when Mum used a wrangle to dry the washing and I used to sit on the table in the kitchen watching her. The photos we have of our growing up there are an interesting record of social history as everyone became more prosperous and fashions changed, but Mum being a bit of a hoarder the house is still full of some of those 50’s and 60’s style ornaments.

Neil remembers Mum enjoying her days out visiting him at Loughborough, where he was at University, and chatting to all his student friends.

There were the caravan holidays when Neil and I were packed into the back of Dad’s Morris Minor at 3 in the morning so we could get to Cornwall before nightfall. Kim the dog got in somewhere as we lay sleeping top to toe across the back seat, and we shouted to Mum and Dad “ Are we there yet?”

Mum and Dad used to take us to St Andrews to see the Blues, and Mum would make a picnic out of it, whatever the weather. Dad even caught pleurisy at one match, we got so wet. These were family days out for us, as our Auntie June used to come as well and Mum used to tell people around us to watch their language.

Neil remembers that Mum used to play a mean game of indoor and lawn green bowls, and used to remind him to let the older ladies win…Mum was in her late sixties at this point.

Neil also remembers Mum visiting him whilst he worked at McDonalds asking for a tour with a “ free coffee and apple pie” thrown in for good measure…….and then casually asking if it was alright for the ladies in the mini coach outside to come in as well!

I remember Mum and Dad leaving us at home and going dancing at Trentham Gardens on a Saturday night. It was alright though as we got to have baked beans and bread and butter in front of “match of the day”.

We had a great trip in the early 70’s to see Mums brother, Charlie, his wife Vera and their sons, Michael, Richard, Jeffrey and Christopher in British Columbia. Being a 17 year old myself at the time, I wasn’t keen on a holiday with Mum and Dad, but I am eternally grateful that Mum in particular, persisted. Mum took jobs at the Total garage that used to be on Chester Road at Castle Bromwich, and local shops in order that they could afford these occasional trips.

Mum could be embarrassing at times, none more so to me when I was involved as a witness to a murder case at Birmingham Crown Court, and Mum insisted that her ladies group should come to watch me give evidence, a harrowing thing to do without Mum being there with her friends. I put my foot down on that one, but Mum and her friends came to every other day of the trial, and I have recently found a log of the trial that Mum had kept.

We would all get frustrated that we could never go anywhere without her finding someone to stop and talk to. Dad would often be wandering down a shopping street thinking Mum was with him, and he would suddenly exclaim “ where is she now”, as she had found some random passer by to dally with.

She retained a strong community spirit though, and fought for a tidy neighbourhood, often engaging the council in her and Dad’ s efforts to ensure the tenants in the flats opposite kept the balconies free of washing, and that the litter bins were properly emptied on the road.


Mum ran the ladies community group for about 27 years and I know she found the support of her friends at the club to be invaluable when Dad died in 2006. Particular mention though should go to John from the dreaded flats across the road, and with whom she would engage in cheeky banter every day when he visited.

Eventually ill health took its toll on Mum, but she retained her sense of fun and good humour. She never gave in to self pity in my presence and seemed to accept her decline with good grace. When a care package was arranged to look after her she was able to establish a lovely warm rapport with the carers which was a joy for Ruth and I to see, as we worked with them and people like Vivia to ensure that Mum was looked after as she withdrew into herself. I know that she became one of their favourites. I will never forget sitting with her after the carers had put her to bed. I would have a beer, Ruth would be doing her knitting and Mum would be sitting up in bed with a packet of crisps. It was as if she was reverting to childhood.

She still remained bloody minded though, and we had a laugh watching Georgina trying to get her to do her exercises, and seeing her delighted reaction to the fact that a male carer had been assigned to her, reminded me that the old Mum was still there.

We knew that time was up when she was no longer able really to hold a conversation, but on one of our last visits I was being cheeky with her and telling her how much trouble she was putting me to, to get her looked after, and she suddenly looked across at me and said “Well it keeps you out of mischief”

That is really what Mum managed to do all her life, protect us nurture us and “ keep us out of mischief”

Made up of cash collected at funeral and Martin and Ruth's contribution.

Always a smile on her face and a cheery word. Will be sadly missed.
God Bless 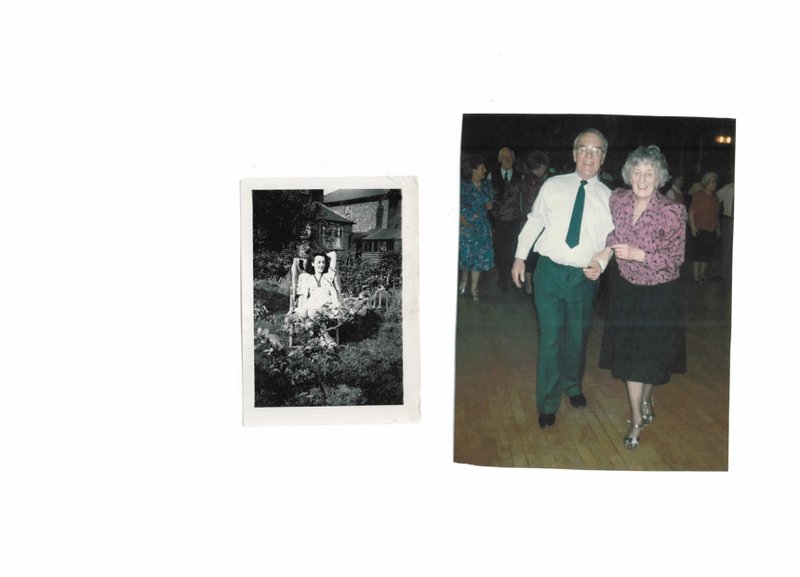