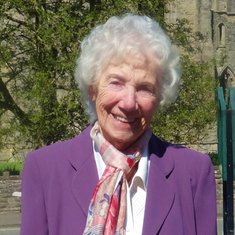 Passed away peacefully on 31st January 2015, after a long illness bravely borne at Cleeve Hill Nursing Home, Cheltenham, aged 91 years.
Devoted Wife of the late Allin (GCHQ) and adoring Mother to their late Daughter, Julie. Much loved Mum to Son and Daughter-in-Law, Peter and Alison, and loving Nanna to Grace, Matthew, Meriel, Benjamin, Edward and Rachel. Also proud and delighted Great-Nanna to Rose. Loving Mother and Mother-in-Law to Allan and Barbara.
Rest in Peace

Lilian was born in Dublin but moved to Scarborough as a small child, with her parents and 6 brothers and sisters. Her youthful occupations included making seaside rock and working in a hotel, before joining the Women’s Auxiliary Air Force during the War, where she worked with barrage balloons and learned to drive.

She married Allin, in Scarborough in 1944. Two sons, Peter and Allan followed, and when the boys were in their early teens, Julie was born, a long-awaited daughter. Julie had Down's Syndrome and Lilian was a truly devoted mother to her until she died, aged 50.

Allin's job with GCHQ took the family to Scarborough, Winchester, Malta (where Julie was born) and Cyprus. They settled in Cheltenham on their return from Malta in the early Sixties and moved to No. 2 Smythe Road in 1964, where Lily lived for 50 years.

She loved travel and, as well as living abroad, visited Greece, Turkey, Israel, Egypt, France, Germany, Switzerland, Italy, Spain, Portugal and California. When Allin's Malta posting finished in 1962, the family drove back to England, via Italy, Switzerland and Germany, no mean feat with a small baby and two teenage boys!

Lily loved fashion and worked part-time selling smart clothing for ladies of "a certain age" until she was well into her Seventies.

During the 1980s she became a proud grandmother to Grace, Meriel and Edward and in 2012, her great-grand-daughter, Rose, arrived, absolutely adored by Lily.

Her Roman Catholic faith has always been very important to her – she was a regular attender at Mass at St Gregory’s Church in Cheltenham for many years until she became too frail. She used to arrive early so she could sit in "her" seat!

She will be greatly missed but we must take comfort from her long and extremely full life. Her family and relatives will always remember her, as will her many friends.

Gill and Geoff Herbert donated £20 in memory of Elizabeth

Such a lovely lady and we will miss her. God Bless you Lilian. With love, Gill and Geoff x

Anonymous donated £20 in memory of Elizabeth

Anonymous donation "In loving memory of Auntie" left at the funeral.

We will treasure our memories of Nanna

Cathy,Sheila and Jim Kennedy donated in memory of Elizabeth

With love from Cath, Sheila and James in loving memory of Aunty Lilly

We will miss our Nanna, we have some lovely memories of her!

Hilary and Alan Gilfoy donated in memory of Elizabeth

Many of my earliest memories are of my Auntie Lily and Uncle Allin and family spending time with us. There was lots of laughter and I always will remember Lily for her jolly personality.

Lily and I were like sisters from day one, both of us being married to the two brothers Allin and Jack. We had a lot of fabulous times together over the years with our children. Young Allan and Peter were my page boys and Julie was bridesmaid to our daughter Christine and then our son David.
Lily will be missed by us all very much.

In fond memory of Nanna

We only knew her for a short time but will remember her as a lovely, genteel lady with a wonderful sense of humour. I am sure she will be sadly missed by all of her family. Shirley , Julian and family

Happy Memories of life in Malta. Lily played an important part of my life and we were good friends to the last. Shall miss our "jollies" darling. Sleep Well.xx

May God Rest her Soul

The last of the Kennedy sisters all sadly missed

May God Rest her Soul.

The last of the Kennedy sisters all sadly missed. 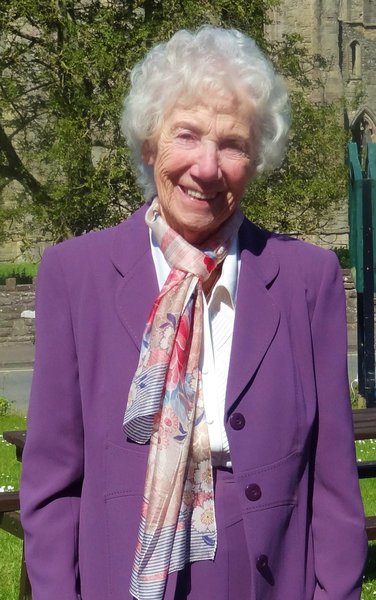