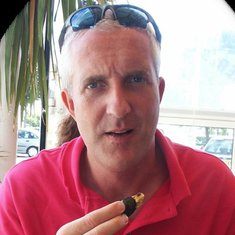 Donate in memory of
DavidParkinson’s UK

Passed away peacefully at home, with his family by his bedside, after suffering for a long time with Parkinson's and Alzheimers's.
Beloved and devoted husband of Jane. Loving father to Nicholas, Elizabeth and Alexandra. Much loved brother of Peter. Caring son in law to Ruth and brother in law to Sarah, Elizabeth, Harold and Rebecca.


God saw you getting tired,
and a cure was not to be.
So he put his armes around you
and whispered "Come to Me"


With tearful eyes we watched you
and saw you pass away
and although we loved you dearly,
we could not make you stay.


A Golden heart stopped beating,
hard working hands at rest.
God broke our hearts to prove to us
He only takes the best.

David was born in St Mary's Hospital in Paddington, London, in March 1964 to John and Joan Morley. He was a large baby and his Dad gave him the nickname "Big D" which he carried on using, much to David's chagrin, until middle age!
The family lived in Maida Vale until 1966 when they moved to Shropshire where Peter, was born. In 1971 they moved to Runcorn, where they settled.
David was a loving son to his mother and father, a role model for Peter. He was mature for his age and was a great help, around the home with DIY and bike and car mechanics.

David believed you could do anything if you put your mind to it, and not to be put off by what other people thought. He didn't like following the pack, preferring to come up with his own ideas and solving problems his own way. This often led to some "unconventional" behaviour! When the skateboard craze first came to our shores, his Dad refused to buy him one. This didn't deter David, who decided to make his own from a plank of wood and roller skate wheels! It worked very well. It looked unusual, but David didn’t care what anyone thought.

David loved cycling. So when he heard about mountain bikes arrived, David was keen to get one, Long before you could buy them, David tracked down a frame builder in Blackburn who offered to custom build one for him. It was best described as an "unusual" design, and it certainly gathered much interest when David entered bikes races. David was convinced they were admiring looks, but we're not so sure!

David taught Peter how to drive. Rather unconventionally, he used to lie down across the back seat, out of view, so Peter would get used to driving on his own. The only disadvantage to David's cunning plan was he couldn't see where the car was going, and a number of lessons were interrupted when Peter took a wrong turn. It worked - Peter passed first time!

David loved the great outdoors, and spent many happy childhood holidays in the West Highlands of Scotland, walking, fishing and surfing on the beaches. As a young man he was a keen member of the scouts, then the Adventure Scouts.

Then in January 1985, in one of the worse snowstorms that Kent had seen in years, David’s life changed forever, when he came to the rescue of a young Jane Morton. From then on they were in separable. They formed an amazing partnership. For David, Jane represented style and sophistication. For Jane, David was everything she wished for; tall, handsome and most importantly, a loyal and devoted friend. It wasn't long before Jane got him out of his dreary corduroy pants & hush puppies and Jane ditched her heels for walking boots and trainers.

They married in 1989 and at the time, Fr. Knight commented on the strength of their bond.

David's work life was around emerging technologies, but in reality, work was not something to stress about. It was there to provide a means to enjoy life. David worked to live, he loved his weekends and holidays and squeezed every moment out of them. Many a happy time was spent with David in charge of the barbeque on a warm summer evening or dishing our lethal cocktails from his bar on Christmas night.
His time was actions packed.
Even getting caught up in an armed bank robbery in Italy didn't bother him, rather than panic, he immediately set about calming the situation and his main priority was to make sure that Jane was safe.

Fatherhood beckoned. In 1992, Nicholas was born, Lizzie came along 2 years later then Ally in 1997. From the start, David was a natural. He was a thoroughly modern hands-on Dad, sharing all the duties with Jane. Jane and the children being the centre of his life.

His character shines through them all. He taught them to be independent, to be different and make the most of every the day, because life is too short.
From almost the moment they were born, he encouraged them to enjoy the outdoors, it wasn't unusual to see them riding through Heswall with one of them behind David in the tag along. As soon as they could walk, they were kitted out in fleeces and walking boots and they were off for their long hikes that even an Olympic athlete would struggle to keep up with.

They all have their own special memories of their father. Nicholas will tell you about all the adventures and outdoor activities he undertook with David; making cups of tea and coffee with a trangia on a mountainside in the rain and canoeing around the Llyn Peninsular.

Whilst Lizzie will tell you about the times when they would sit with their oils and paint pictures and the nights they would stare at their stars through their telescope.
Ally (or mushroom as David called her), describes the time when David took her first driving lesson on Black Rock Sands when she was only 7!

Millennium Eve was a really big deal for him. David was in central command of one of the biggest parties in town, his firework display gathered more interest than the showcase on the Mersey.
Ten years ago, they had to take on board the difficult news that David had Parkinson’s. They didn’t let that deter them though. For a long time, life went on as normal. David’s countdown calendars for Christmas and their holidays continued to appear.
Millie joined the family 7 years ago and David's 'Team Morley' was complete.
A setback came in November 2010, when David was diagnosed with Alzheimer's. At which point, many adjustments had to be made. Their family adventures in France came to end and taking the caravan to Abersoch & the Lake District became the norm.
There have been many dark moments, but many bright ones too. Perhaps the most joyful, was the opportunity for Jane and David to return to France to Our Lady, in Lourdes. Our Blessed Mother and their fellow pilgrims have been a huge source of comfort to them ever since.
The most special moment came in this Church on New Year’s Eve 2011, when David turned to Jane and asked how he might become a Catholic. David was received into the Church three months later.

Earlier this year, we were saddened to learn that David's condition had worsened. Jane and the children went into overdrive. They brought David home to ensure that their time together was centred on the family. In May, they celebrated their 25th wedding anniversary. It
was a real highlight, when out of the blue; David opened his eyes and led us to toast their wonderful partnership.

It's been a long and difficult road. Made so much easier because David was such an amazing and inspiring human being. He gave so much to us, it was easy to care for him. We are all richer for his presence in our lives and whilst he is no longer with us physically, we know that he will always be there for us.

We reckon that David will be right at home in Heaven. As Brother Pat so eloquently put it; “We can't help thinking that the heavenly banquet has already had a thorough going over - with all David wants to eat and no-one to stop him!”

May the Light shine on you David and Our Lady take you in her warm embrace.

So long old friend. I have been looking for you for years since we lost touch not long after you married Jane. I had lost touch so many years ago and only found out today you have left us. You were my best buddy at primary school through to leaving Norton Priory. We won the Cheshire hike together when in the 1st Halton scouts. So many lovely memories of hiking around the Lakesm Stockham Lane, John, Joan and Peter. So sad I did never meet Jane and your children. Rest well Big D! Rest well x

In loving memory of my son in law, David Morley.

In loving memory of David, a dear friend to us all & who lived life to the full and who has left an amazing legacy. Our love always. Sarah & Harold x

In loving memory of our dear friend David. May you Rest In Peace & thank you for beimg present in our lives. Sarah & Harold Lo