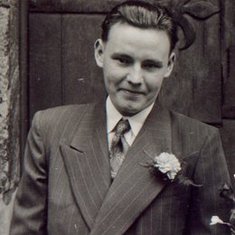 Did his National service in the Catering Corp of the RAF.
The RAF was something he was immensely proud of and his children’s stomachs and taste buds were very grateful of. Derrick was a good cook.

Met, courted, and Married the love of his life and soul mate, Mavis Hackett.
If you hear how Derrick met Mavis you could say “He fell at her feet”.
Derrick was playing Football, and had been put in goal. Derrick was about 5 foot 5 inches so no one is sure what the team were thinking! During the game Derrick had to dive to stop a potential goal. He was on the ground and In his words. ”I saw a cracking pair of legs and when I looked up there was Mavis. I thought to myself that’s the girl for me”. It was Karma, Kismet, Fate, he was smitten.

Derrick and Mavis had a tandem bicycle when they were courting and Derrick used to laugh about the first time they went out on it together. Apparently, they started off riding along quite happily then after a while Derrick thought that the pedalling was becoming harder. Derrick looked around to find Mavis sat with her feet up on the crossbar. These were memories and moments that he treasured always.

Together they had 4 children, Derek, Pamela, Stuart, and Anita.
Pamela was born with a hole in the heart, and sadly died.
Derrick has 7 Grandchildren Adam, Alex, Daniel, Ian, Jason, Matthew(Matty), Ricky, and Great Grandchildren too numerous to name.

Derrick and Mavis had a dream of owning their own house, and purchased 13 Lombard Ave in 1965. Their family home was full of love laughter, and inevitably the odd disagreement.

April 1972, 50 years ago, Derrick was devastated by the death of Mavis, who died after a long illness, from Lymphoma cancer.

Most of his working life he was with Welforge Ltd, where he worked with his Brother Ben and Brother in Law Vic and later was proud to work alongside his son Stuart.

Things he liked:
Singing. Derrick loved to sing and he could always be heard singing whilst having a bath or shaving. The song he sang the most was “My Way” by Frank Sinatra. He didn’t like “Pop” music, preferring the music of the crooners such as Matt Monroe, Bing Crosby etc. However, he could occasionally be heard singing “Down Down” by Status Quo, or some other rock tune. He would deny it, but with a wry smile on his face :-).

At the end of this ceremony when Derrick is Committed, the family ask that you sing along, to “My Way” he would love it, the words are on the order of service.

Beer. Derrick liked a Pint now and again, but not any Pint, Banks’s was his favourite.


Football. He was an avid West Bromwich Albion fan, and regularly went to watch them along with Brother in Law Vic.

Snooker. When younger Derrick played snooker which was seen as a miss spent youth at the time. Derrick said that Mavis soon put a stop to that! When there was Snooker on the TV he was glued to it and if you phoned him during a match, he couldn’t get you off the phone quick enough :-)

Golf: Derrick had a few years when he loved to play a round of Golf and during the cold weather his daughter Anita’s tights would start to disappear. Apparently, it’s a golfer’s trick to wear ladies’ tights under their trousers to help keep warm!

Derrick was a role model to his children instilling values of honesty and politeness Ps & Qs.
He taught them how to ride a bicycle, something his son Derek now does almost daily.
How to cook.
Drive a car: He taught both Mavis and his son Derek to drive. Afterwards he would joke, that the stress of it had made his hair fall out, so he passed on teaching Stuart and Anita.
Ride a motorbike.
Use a camera, a real one.
Swim
And numerous other life skills.

Derrick’s health deteriorated over time. A cataract operation went badly wrong causing a bleed in the eye, and almost total loss of vision in that eye. He still had vision in one eye, but this was impaired by cataracts also.

Derrick’s heart was broken again when he had to sell his and Mavis’s dream home, 13 Lombard Ave , and move into Sheltered Accommodation at Beacher Place. However at Beacher Place he was able to maintain his independence and yet still have care around if he needed it.

His health deteriorated further, basicly as he put it, “just getting old”.
This year after a lot of health problems he moved into full time care at Norton Lodge, where he has been well cared for these past few months. 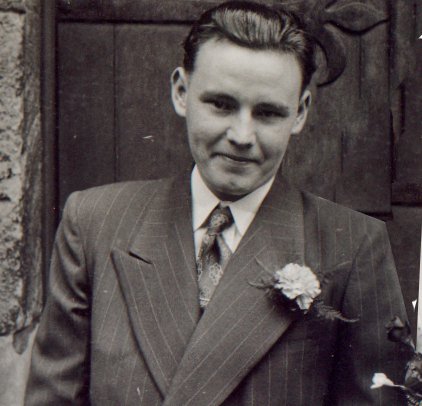