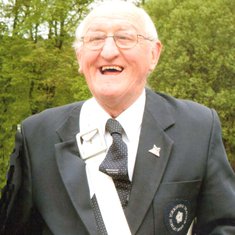 On August 14th 2015 suddenly at his home in Kirkheaton (Huddersfield) Raymond aged 85 years. Retired Master Butcher. Beloved father of Clive Richard and Janet Elaine, father-in-law of Angela, Grandad of Simon, companion of Susan and a great friend to everyone.
Funeral Service at Kirkheaton Parish Church on Friday August 28th at 12 noon followed by private committal.
No flowers by request please. Donations in lieu if wished may be given for Yorkshire Cancer Research c/o Radcliffe Funeral Service The Lindens New Road Kirkheaton (Huddersfield) HD5 0JB or online at radcliffefuneralservice.co.uk. A donation box will be available at the service.
Will friends please accept this intimation and meet at the Church.

I have known Raymond for at least 50 years. I first met him when I started courting my future wife Margaret. Raymond and I shared a similar sense of humour and we got on well. I delivered eggs on a Friday evening for my future father in law and Raymond's shop was the last port of call when we would spend a short while putting the world to right. Raymond would help anyone but sometimes expected something in return-maybe a few tickets for his next show thrust into your hand saying " pay me later" or on a Friday evening " can you drop off some meat for someone who forgot to call". One of the biggest jobs was to remove his lounge window so we could get an extra large sofa into the house.
Raymond was a showman widely known. With his brother William they entertained at the local carnival and Chapel pantomimes. After the untimely death of William, Raymond continued to entertain wherever he went. His involvement with brass banding is well known.
Raymond was fortunate to have Susan as a good friend and Margaret and I had the pleasure of attending a number of butchers functions with them. After holidays he would call in to show us his photographs.
Raymond was a character and legend so rare in today's sanitised world. He will be sadly missed in Kirkheaton and beyond.