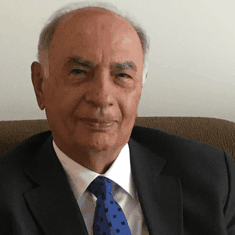 In loving memory of Hamid Sabeti who sadly passed away on 22nd November 2021.

Hamid was born on 29th November 1934 in Sangesar, Iran, the first child in a family of six. Despite his humble beginnings, he received the best education of his time and obtained his medical degree from the University of Tehran. He was the first doctor of medicine born in Sangesar, considered a village at the time. After completing his subspecialty training, and further education in England, he became a faculty member of the medical school and quickly climbed up the ladder of academia in Iran. He was always a compassionate, down to earth, and devoted doctor who treated his patients with the utmost care and attention.

He met Setareh, who was working as a nurse in the same hospital. They got married in 1969 in London and had two children: Sharareh (Shari) in 1972 and Amir Farhad in 1974 in Tehran. Following the revolution they moved to London, where Hamid was able to rebuild a career as an Ear Nose and Throat Consultant, working for a number of NHS hospitals in North London. Following Setareh's untimely death in 1988, Hamid single handedly brought up his two children who have gone on to enjoy academic success and good careers with his support, love and kindness. Hamid has four grandsons: Oskar, Max, Nicholas and James whom he cherished and who loved him back with the same warmth and vitality he showed them.

In 2006 Hamid was lucky enough to meet Sima, whom he married and lived in companionship, love and friendship with until he passed away with her by his side. Hamid loved his job and was reluctant to retire, working as long as he physically could and as long as the General Medical Council would let him. Eventually, he retired at the age of 80 but he kept active by going for walks, meeting friends and enjoying the company of his new found family: Shirin, Omid, and Sanam.

Hamid did not always have an easy life but he had a good and full one. He did not let a triple heart bypass in his forties defeat him. As a doctor, he knew how to look after himself; exercised, ate well and continued to live a physically, mentally and socially active life until his last days. He also continued to read his newspapers, medical journals and the poetry of Persia, particularly that of Hafiz which he knew by heart and would recite both to himself and others.

Hamid was full of kindness, empathy, generosity and warmth. There was never a moment when he wasn't joking about something, or teasing someone in the nicest possible way. He would have wanted us to celebrate him in that spirit. We will miss him terribly.

Dear Uncle Hamid, Thank you for being a funny and kind uncle, and for your great care as the elder Sabeti brother and doctor to the entire Sabeti family. The many summer holidays you all spent with us are some of my most cherished memories growing up, and the time I spent with you as a young adult living in England a special gift. I am heartened that you are never far as you have infused Shari and Amir with your incredible wit and warm coy smile are caring way, and you have brought the lovely Sima into our lives to remind us always of the great light you shined on all of us. I love you and will miss you in this life. Beh Omid eh Didar.

A crater left by the greatest father and kindest, funniest man - will always love you.

I have already attended the funeral and memorial service for dear Dr. Hamid Sabeti, but I wanted to leave this message of condolence here to the Sabeti family on behalf of the Iranian Medical Society in the UK (IMS-UK). Dr. Sabeti was a long-standing member of the IMS-UK and he actively took part in many activities and events of the society over years. He will always be remembered and we cherish his memory.

For and on behalf of the IMS-UK Executive Committee

It is with a sense of deep sadness and loss that I
now remember the few times that I had the good fortune of spending some time with Dr Sabeti . Once when I was visiting London with my family and stayed at Aunt Sima and Dr’s house and another time, a few years past, when they visited Las Vegas. What always stood out to me during these encounters or our occasional conversations over the phone was the genuine warmth and kindness that I always felt. He had a big heart, a ready smile and a wonderful sense of humor.
He will always be remembered with great fondness .
May he Rest In Peace. 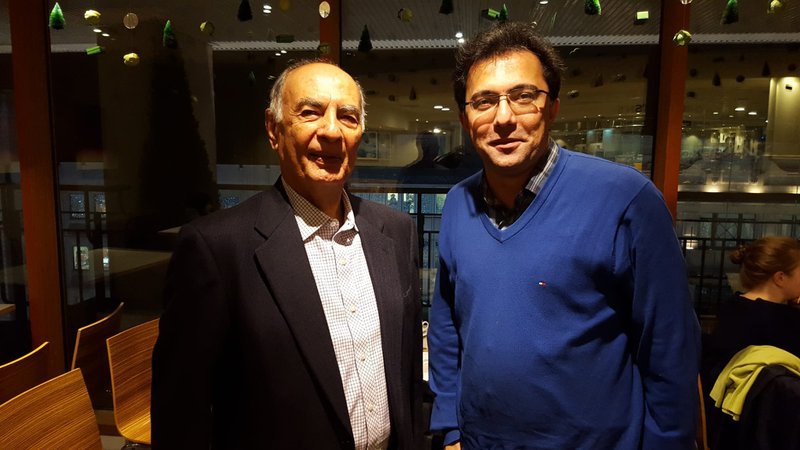 I will never forget you 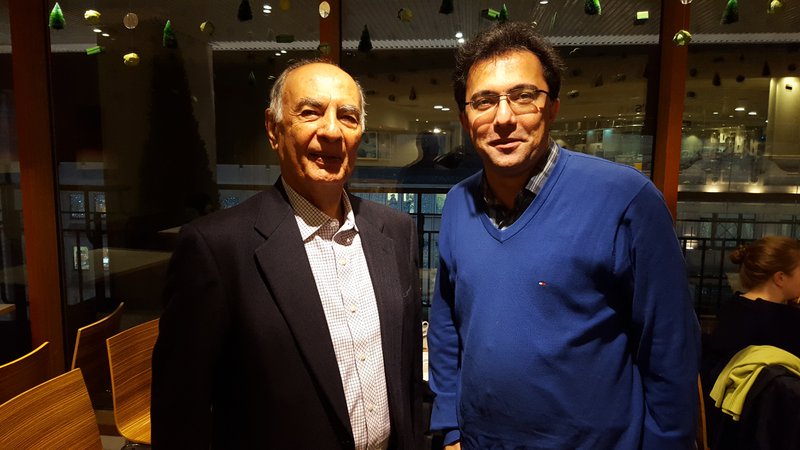 Dear Dr. Sabeti, I will never forget you rest in peace

Dear Dr.Sabeti
I will never forget your kindness and humanity,
today you are not with us,but you will be in my
heart for ever.

Nasrin, Firoozeh and Nargis Bakhtiar donated £100 in memory of Hamid 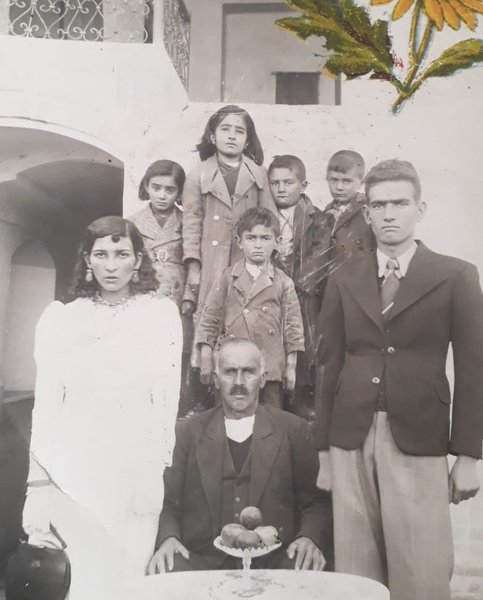 An 11 year old Hamid can be seen in the middle of this photo amongst his maternal cousins and grandfather at a family wedding. 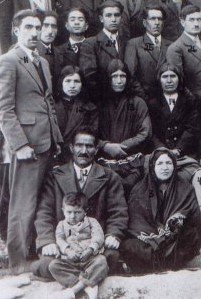 Hamid is the little boy sitting in his grandfather's lap in the front of the photo. His own father is standing to the left. Hamid was about 2 years old in this photo. Sangesar, Iran.

Our donation is in memory of Dr Hamid Sabeti our much respected and admired dear friend.

I was hearbroken to hear of Dr Sabeti's passing. He was one the kindest and most generous men I knew. Growing up, without a father in London, Dr Sabeti often filled in the role with his kindness - never missing a birthday or an important event - always sharing his wisdom and advice, and generally being supportive and caring. When my father passed away Dr Sabeti was a rock and helped me with the initial grieving and the troubles that ensued. He was also one of the most impressive, clever and intutively brilliant doctors I've ever met or consulted with. His bedside manner was superb and his diagonsis and prognosis second to none. He seemed to me a wonderful and compassionate father to Amir and Shari who were my childhood friends, and whose successes and great achievements in life are testimony to their wonderful parents, as well as their own efforts. Dr Sabeti was a great man and will be truly missed. May he rest in peace and I wish solace and tasliat migam to those many loved ones and family that he leaves behind.

I’m still struggling to accept the reality that you’re no longer with us. It all still feels like a bad dream rather than reality.
We may have not been related by blood but you were still an amazing grandfather to me. Your jokes and laughter always lit up the room you were in and now everywhere feels empty without your presence.
Thank you for everything you’ve done for me and our family, you will always be remembered and missed.
Rest in peace Granddad

Catherine Newell is attending the funeral and the reception

Farnaz and I received the shocking and sad news of Dr Sabeti’s passing in total disbelief. Each of us have had a deep and personal connection with him. For my wife Farnaz, whose father was a famed professor of medicine and a teacher of Hamid in the University of Tehran’s medical school, he was a much loved and respected former student of her dad and felt so close to him. For me, he belonged to the same profession as my father and I always viewed him as a very dear uncle. But Hamid Sabeti was much more than these. He was a principled man of unparalleled integrity, humanity and professionalism. To those who were lucky to know him whether as a friend or a colleague or were his patients, Dr Sabeti was the most reliable and sincere man they could have found. I shall never forget his daily supportive calls and life saving advice last year when both my mother and brother were in the throes of fighting a severe case of Covid and Dr Sabeti was there as a beacon hope and strength to us all. I consider myself very fortunate to have known him for nearly four decades. There are people you meet in your life who never disappear from your thoughts and minds and remain as alive as ever. Dr Hamid Sabeti was such an individual. Farnaz and I extend our deepest sympathies to Hamid’s beloved wife, Sima Khanom, and his much loved children Shari and Amir and their respective families.

I was deeply saddened to hear of Dr. Sabeti passing. My deepest sympathies to all the family.
He will be sorely missed.

With deep sympathy in passing of our dear Dr. Hamid Sabeti. He will always be remembered in our hearts and minds.

Dear Hamid. Although I share the sentiment among your family and friends of overwhelming loss and grief, I do think it is important to also acknowledge and state my gratitude. Thank you for being a kind brother to my mother, by believing in her intelligence and ability, by supporting her and advising her in her youth. If it was not for you, she would not have pursued her career of choice. Thank you for your help and support when she arrived in England with her two confused and anxious children in 1987. If it was not for you, we would not have had a path to a new life in a new Country. Thank you for your wonderful family, for your two amazing children, whom I respect and admire immensely. In them, I see the good in you and the good in their mother. Thank you for your candor, for your free-flowing advice, for your tough love. Thank you for your humor, for your jokes, and for the stories that connected me to our family’s roots, to where this generation of cousins came from. Thank you for your thoughtfulness. Thank you for being happy for me and Kamaneh, but particularly so for my mother, when my son was born because you knew what that meant. On the occasion I spoke to you last, when you were hospitalized and a week before you left us, you asked me to not upset my mom, to tell her that you are fine and will leave the hospital soon. Thank you for the memories – there are many. I remember my grandmother’s funeral – several people spoke, and I cannot remember all the sentiments and words, but I vividly remember yours. I recall your emotion, as it vibrated the verses you read of Iraj Mirza. The poem ended with - roughly translated - “ … just walk a few steps by my grave, sit a while and remember me with words, so that in the heart of this soil, my heart will have joy.” Thank you for your life and that which flowed from it. Your loving nephew, Amir Tahmasb Fathi

Dr.Sabetti came to our lives, left foot prints on our hearts, and we are never the same.

I will never forget you

Dear Dr. Sabeti, I will never forget you rest in peace

An 11 year old Hamid can be seen in the middle of this photo amongst his maternal cousins and grandfather at a family wedding.

Hamid is the little boy sitting in his grandfather's lap in the front of the photo. His own father is standing to the left. Hamid was about 2 years old in this photo. Sangesar, Iran. 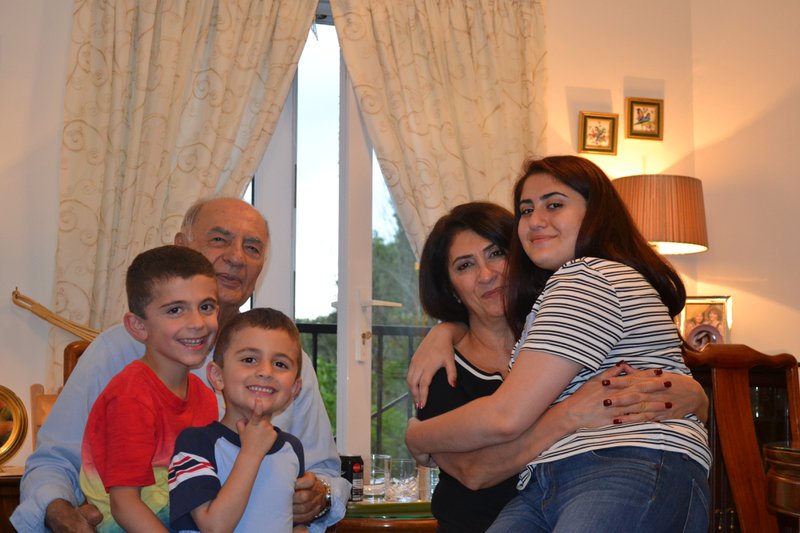 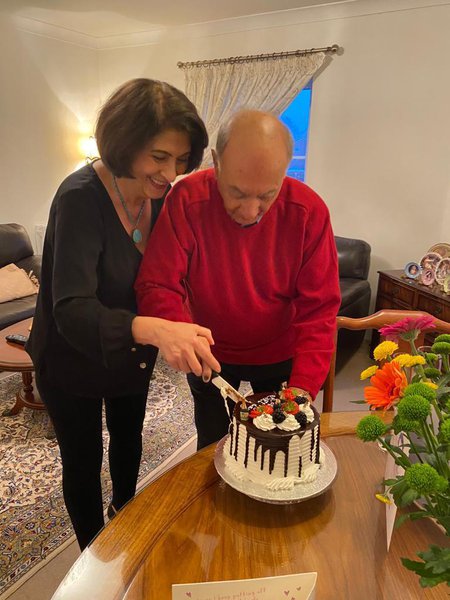 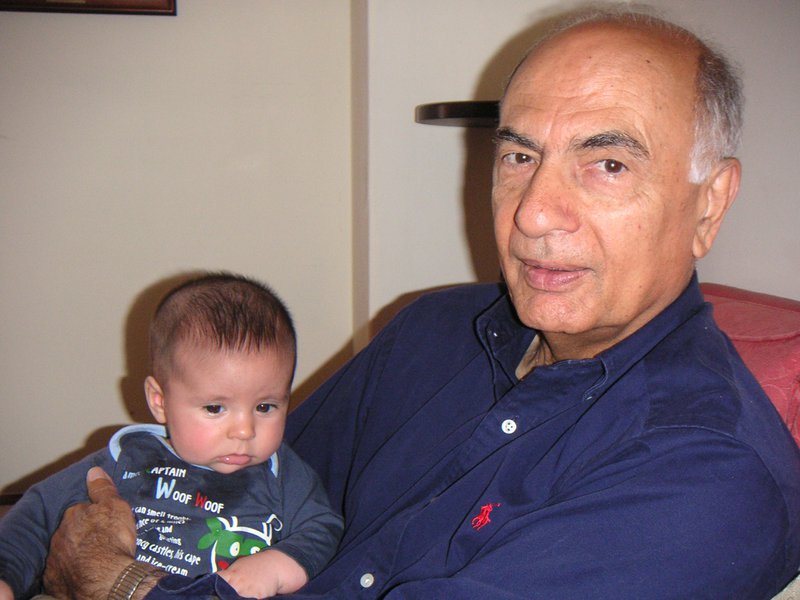 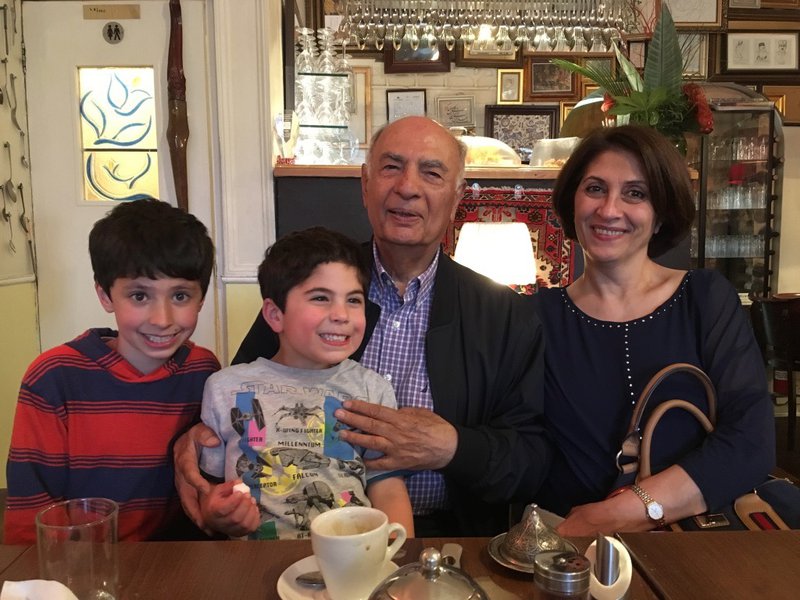 Hamid and Sima with grandsons, Oskar and Max. Hamid with his grandsons, Nicholas and James.